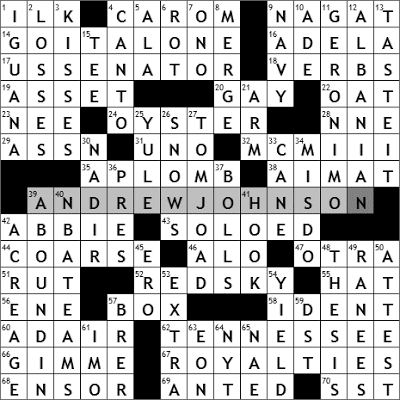 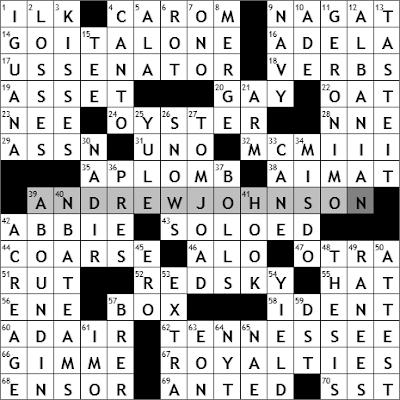 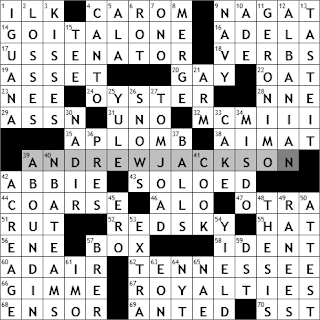 CROSSWORD SETTER: David J. Kahn
THEME: JACK or JOHN … both ANDREW JACKSON and ANDREW JOHNSON fit as answers for 39A. “Either of the two presidents who also served as a US SENATOR from TENNESSEE”. As a result, three of the down clues can also have two answers:

4. Kind of shot : CAROM
A carom is a ricochet, the bouncing of some projectile off a surface. It has come to mean the banking of a billiard ball, the bouncing of the ball off the side of the table.

16. ___ Quested, “A Passage to India” woman : ADELA
“A Passage to India” is a wonderful novel by E. M. Forster set in the days of the British Raj. There are two excellent adaptations for the screen that I would recommend. There’s a BBC television version from 1965 starring a wonderful cast including Virginia McKenna and Cyril Cusack. There is also an Oscar-winning movie version

from 1984 with Alec Guinness and Peggy Ashcroft. Forster had first-hand knowledge of life during the Raj, having worked in India in the twenties.

23. Formerly : NEE
“Née” is the French word for “born”, when referring to a female. The male equivalent is “né”

32. Year the first Tour de France was held : MCMIII
Back in the late 1800s, long distance cycle races were used as promotional events, traditionally to help boost sales of newspapers. These races usually took place around tracks, but in 1902 the backers of the struggling sports publication “L’Auto” decided to stage a race that would take the racers all around France. That first Tour de France took place in 1903, starting in Paris, and passing through Lyon, Marseilles, Bordeaux, Nantes and then back to Paris.

35. Coolness : APLOMB
Aplomb is such a lovely word, meaning confidence and assurance. It is a French word that literally means “perpendicularity”, or “on the plumb line”. The idea is that someone with aplomb is poised, upright, balanced.

39. Either of the two presidents who also served as a 17-Across from 62-Across : ANDREW JACKSON or ANDREW JOHNSON
Like many of the earlier US presidents, Andrew Jackson was a career military man. He distinguished himself as commander of American forces during the War of 1812, particularly in the defense of New Orleans. He had a reputation of being fair to his troops, but strict. It was during this time that he was described as “tough as old hickory”, creating a nickname that stuck with him for life.

43. Performed a cadenza, e.g. : SOLOED
In music a cadenza (the Italian word for “cadence”) is a passage devoted to a solo player or singer. A cadenza usually has a “free” style, giving the featured artist the opportunity to improvise.

47. Other, to Orozco : OTRA
José Clemente Orozco was a Mexican painter famous for his themed murals, often promoting the causes of peasants and workers. His most famous mural is probably a fresco painted in the Library of Dartmouth College, called “The Epic of American Civilization”.

55. Jipijapa, e.g. : HAT
Panama hats are also known as Jipijapas, named for a town in Ecuador that was a major player in the hat trade.

56. Chemical suffix : -ENE
An alkene is an organic compound made up of carbon and hydrogen atoms. It differs from an alkane in that it has at least one C=C double bond. The simplest alkene is the gas ethylene, a major raw material used in the manufacture of plastics (like polyethylene).

60. Gilbert ___, author of “A Void,” a 290-page novel without the letter E : ADAIR
Gilbert Adair is a Scottish author. He wrote a translation of the book “La Disparition” by the French author Georges Perec, an interesting work in that it contains no instances of the letter “e”. Adair’s translation is called “A Void”, and in it the author also managed to avoid using the letter “e”. Remarkable …

68. “The Scandalized Masks” painter : ENSOR
James Ensor was a Belgian painter active in the first half of the twentieth century. He lived in Ostend for almost all of his life, and in terms of travel, he only made three brief trips, to Paris, London and Holland.

70. Bygone flier : SST
The most famous SuperSonic Transport (SST) was the Concorde, a plane that’s no longer flying. Concorde had that famous “droop nose”. The nose was moved to the horizontal position during flight to create the optimum aerodynamic shape thereby reducing drag, and was lowered during taxi, takeoff and landing, so that the pilot had better visibility. The need for the droop nose was driven largely by the delta-shaped wings on Concorde. The delta wing necessitates a higher angle of attack at takeoff and landing than conventional wing designs, so the pilot needed the nose lowered so that he or she could see the ground.

1. Creature with a dewlap : IGUANA
Dewlap is that flap of skin that hangs below the neck of some creatures. Dewlaps are found on anything from dogs to iguanas.

3. Things wrapped in foil : KISSES
Hershey’s produce over 80 million Kisses each day, and has been making them since 1907.

4. “Don Juan” division : CANTO
A canto is a section of a long poem, a term first used by Dante. “Canto” is the Italian for “song.

Lord Byron wrote the poem “Don Juan” based on the legend of the Don Juan the womanizer. In the poem, he created the character Donna Inez, Don Juan’s mother. Supposedly, Inez was based on Byron’s own wife, Annabella Milbanke.

7. “Starpeace” recorder, 1985 : ONO
“Starpeace” is a concept album recorded by Yoko Ono in 1985. The project was designed as a message of peace, and a statement of opposition to the “Star Wars” missile defense system championed by President Reagan.

8. Conflate : MERGE
To conflate is to bring together, to meld or fuse.

11. Real-life character in the 1950 western “Broken Arrow” : GERONIMO
“Broken Arrow” was a ground-breaking movie when it was released in 1950, as it marked the first time that a major Western portrayed Native Americans sympathetically. Top of the bill was James Stewart, and playing Geronimo was actor Jay Silverheels. Silverheels had already landed the TV role of the Lone Ranger’s sidekick, Tonto, when he was offered the part in “Broken Arrow”.

12. Language known to native speakers as “gjuho shqipe” : ALBANIAN
The Albanian language is spoken mainly in Albania and Kosovo.

25. Winter time : YULE
“Yule” celebrations coincide with Christmas, and the words “Christmas” and “yule” have become synonymous in much of the world. Yule, though, was originally a pagan festival celebrated by Germanic peoples. The name “yule” comes from the Old Norse word “jol” that was used to describe the festival.

27. 1940 Henry Fonda role : TOM JOAD
Tom Joad is a character in the John Steinbeck’s “The Grapes of Wrath”. The role of Joad was played by Henry Fonda in the 1940 film adaptation directed by John Ford. Ford’s movie has a place in history, as it was one of the first 25 movies selected for preservation in the US National Film Registry by the Library of Congress.

37. Cotton ___ : BALLS or BOLLS
A boll is a seed-bearing capsule of some plants, particularly flax and cotton.

41. Captain James of the high seas : COOK or HOOK
The famed British explorer, Captain James Cook, made three major voyages of discovery into the Pacific Ocean. Cook was in command of HMS Resolution on his third voyage, and along with his crew he became the first European to visit the Hawaiian Islands, in 1778. He landed on Kauai, and named the whole archipelago the Sandwich Islands, in honor of the fourth Earl of Sandwich who was in charge of the British Admiralty at the time. Cook continued his voyage, leaving Hawaii for exploration of the coast of what is now Canada and Alaska, returning to Hawaii the following year. After one month of contact with the native Hawaiians, Cook attempted to leave the islands but was forced to return to repair a broken mast. Relations between the Europeans and the islanders had been good, but despite this a dispute developed and got out of control that resulted in Cook being struck on the head and stabbed to death. His body was dragged away by the islanders, and as an apparent sign of respect for the Captain, the body was processed according to funeral traditions associated with Hawaiian kings and elders. Eventually, after a petition from the remaining crew, some of Cook’s remains were also returned for a formal burial at sea, adhering to British naval tradition.

Captain James Hook is the bad guy in J. M. Barrie’s play “Peter Pan; or the Boy Who Wouldn’t Grow Up”.

45. Ranch closing? : -ERO
A ranchero is one employed on a ranch, a word with Spanish roots.

49. Bollywood queens : RANEES
Bollywood is an informal name given to the huge film industry based in Mumbai in India. The term “Bollywood” is a melding of “Bombay”, the old name for Mumbai, and of course Hollywood.

57. ___ Fox : BR’ER
Br’er Rabbit and Br’er Fox are characters in the Uncle Remus stories, written by Joel Chandler Harris. His stories are adaptations of African American folk tales that he collected across the American South. The “Br’er” of course stands for “brother”.

59. It starts in March: Abbr. : DST
On the other side of the Atlantic, Daylight Saving Time (DST) is known as “summer time”. The idea behind summer/daylight-savings is to move clocks forward an hour in spring and backwards in the fall, so that afternoons have more daylight.

64. Big Apple read: Abbr. : NYT
“The New York Times” has been published since 1851. These days a viable alternative to buying the paper is to read the news online. NYTimes.com is the most popular online newspaper website in the country, and I’m proud to be one of the 30 million visitors to the site each month.

Nae is the Scottish vernacular for “no”.