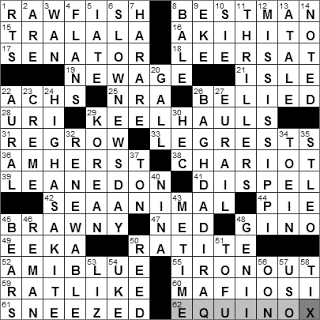 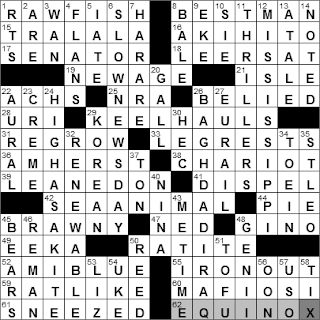 CROSSWORD SETTER: Patrick Merrell
THEME: None
COMPLETION TIME: 21m 40s (and it’s late on St. Patrick’s Day, if you know what I mean!)
ANSWERS I MISSED: 0


Today’s Wiki-est, Amazonian Googlies
Across
1. Carpaccio base, maybe : RAW FISH
Carpaccio can be meat or fish. It is sliced very thinly, or may be pounded until it is thin, and then served raw. Carpaccio is a relatively contemporary dish, first served in 1950 to a countess in Venice, Italy. The lady informed the restaurant owner that her doctor had advised her to eat only raw meat, so she was served thin slices of uncooked beef in a mustard sauce. The owner of the restaurant thought that the colors of the dish reminded him of paintings by Vittore Carpaccio, so he gave it the name “Carpaccio”. So the story goes anyway …

19. Music genre : NEW AGE
The New Age Movement is a western philosophy that traces its roots back to the early 1800s. The movement focuses on achieving the highest human potential as an individual and embraces many traditionally eastern spiritual practices, but eschews all religious doctrines. New Age music is composed with the intent of supporting this philosophy. It tends to be very minimalistic, very tonal and harmonic. It is often used as a backdrop for relaxation or meditation.

21. Barbados, e.g. : ISLE
Now that Barbados is an independent country, by all measures it is a very developed country. Using the Human Development Index (HDI), Barbados is the third most developed country in the western hemisphere, coming up right behind the US and Canada.

22. Worms cries : ACHS
The exclamation “ach!” is usually translated into English as “oh!”

Worms is a town on the Rhine River in southwest Germany. It is most famous perhaps for the general assembly (or Diet) that took place there in the 16th century.

A Diet was a general assembly of the estates of the former Holy Roman Empire. The most famous of these assemblies was the Diet of Worms, a 16th-century meeting that took place in the small town of Worms on the Rhine River in Germany. The main item on the agenda was discussion of the 95 theses of Martin Luther. Luther was summoned to the meeting, and there found to be guilty of heresy and so was subsequently excommunicated by the Pope.

25. Ulysses S. Grant was its eighth pres. : NRA
The NRA is the National Rifle Association, an organization that has been around since 1871. The group has had some celebrity presidents, including US President Ulysses S. Grant. It’s often said that the NRA is the most powerful lobbying group in Washington.

28. State sch. in Kingston : URI
The University of Rhode Island was first chartered as an agricultural school, back in 1888. It’s main campus today is located in the village of Kingston.

29. Severely rebukes : KEELHAULS
The punishment known as keelhauling originated in the Dutch Navy. A sailor who had committed a serious offence was tied to a rope that looped beneath the ship, either from one side to the other, or from stem to stern. Once sentenced to keelhauling, the sailor had little hope for survival. If the rope was pulled quickly, the sailor was lacerated and sometimes even decapitated by being dragged along the barnacle-covered keel. If the rope was pulled slowly, the sailor’s weight might keep him away from the keel, but then he was underwater so long he was likely to drown.

36. Home of Hampshire College : AMHERST
Hampshire College is a private school in Amherst, Massachusetts. It is one of our newer colleges, first taking students in 1970. It has a reputation as a “radical” school. In 1979 it became the first American college to divest from apartheid South Africa, and in 2001 it declared itself opposed to the War on Terrorism, again being the first school to do so.

44. Organizational figure : PIE
I guess the reference here is to a pie chart, a method used to organize and display information.

47. Jules Verne harpooner ___ Land : NED
Ned Land was one of the protagonists in Jules Verne’s classic “20,000 Leagues Under the Sea”. In the famous movie adaptation from 1955, Ned Land was played by Kirk Douglas.

Jules Verne really was a groundbreaking author. He pioneered the science fiction genre, writing about space, air and underwater travel, long before they were practical and proved feasible. Verne is the second most translated author of all time, with only Agatha Christie beating him out.

48. Singer Vannelli of 1970s-’80s pop : GINO
Gino Vanelli is a Canadian singer, from Montreal, Quebec. Today he is very popular in Holland, and divides his time between his homes in the US and the Netherlands.

50. Flightless bird : RATITE
Ratites are species of birds that cannot fly. Ratites are different physiologically than other birds in that they have nowhere on their sternum to attach the muscles needed for flight.

52. Standard with the lyric “Ain’t these tears in my eyes tellin’ you?” : AM I BLUE?
“Am I Blue?” is a song that dates back to 1929, when it was a big hit for Ethel Waters. It has been covered by many artists since then, most notably Eddie Cochran and Cher.

62. Semiannual event : EQUINOX
An equinox is a phenomenon dictated by the tilt of the earth’s axis. Twice every year, that tilt “evens out” and the sun is equidistant from points at the same latitude both north and south of the equator. It is as if the earth has no tilt relative to the sun. The name equinox comes from the Latin for “equal night”, inferring that night and day are equally long, as the effect of the earth’s “tilt” is nullified.

7. City known as Salisbury until 1982 : HARARE
Cecil Rhodes (famous in America as the founder of the Rhodes Scholarship), was a very successful English businessman and South African politician. He founded the De Beers diamond mining company, and also founded the state of Rhodesia which was named after him. The British colony gained its independence over time in the latter half of the 20th century, and is known today as the countries of Zambia and Zimbabwe. The Rhodesian capital of Salisbury was renamed in 1982 to Harare, the current capital of Zimbabwe.

9. Accomplish by economy, with “out” : EKE
To “eke out” means to “make something go further or last longer”. So, you can eke out your income by cutting back on expenses.

12. United States divider : MISSISSIPPI
The Mississippi River runs right through the Midwest. It originates in Lake Itasca, Minnesota and flows into the Gulf of Mexico about a hundred miles below New Orleans. The name Mississippi is a corruption of a Native American name “misi-ziibi”, meaning “Great River”.

26. Home to more than 5 1/2 million Arabs : BAGHDAD, IRAQ
It seems to be widely accepted that the name “Baghdad” is derived from the Persian words “bag” (God) and “dad” (given).

27. Kind of pass : EURAIL
In my days as a student, the way to backpack around Europe was using a Europass. Nowadays that is known as a Eurail pass. The Eurail pass gives you access to most trains (and some shipping lines) right across the continent.

34. Wheel alignment : TOE-IN
In the world of car maintenance, “toe” is also known as tracking, the angle a wheel makes relative to the longitudinal axis of the vehicle.

35. Pope with a Nov. 10 feast day : ST LEO
The first pope named Leo is now known as Pope Saint Leo the Great. He is famous for having met with the feared Attila the Hun and persuading him to turn back his invading force that was threatening to overrun Western Europe.

40. Pretty ballerina in an Abba song : NINA
I am an unapologetic fan of ABBA’s music. ABBA was of course the Swedish group that topped the charts in the seventies and eighties. The name ABBA is an acronym formed by using the first letters of the given names of each of the band members, namely: Agnetha, Benny, Bjorn and Anni-Frid.

43. Respite from dependents and everyone else : ME-TIME
Oh, how I do love me-time!

48. Guardian spirits : GENII
Genii is the plural of genius. In Roman mythology a genius was something divine to be found in any person, place or thing. In particular, doors and gates each had their own genius that acted as a guardian spirit.

50. Papyrus, e.g. : REED
The papyrus plant was one commonly found in the Nile Delta of Europe. The pith of the plant was used to make a thick, paper-like material on which one could write. This writing material, which became known as papyrus, became a competitor for the most popular writing surface of the day known as parchment, which was made from animal skins.

51. Some soft white blocks : TOFU
Tofu is another name for bean curd, and is a Japanese word meaning just that … bean that has “curdled”. It is produced by coagulating soy milk, using either salt or something acidic. Once the protein has coagulated, the curds are pressed into the familiar blocks. Personally, I like tofu, but my wife, she hates it …

Liz Taylor has led what can only be described as a “fabulous” life, especially while married to Richard Burton. Ms. Taylor is very fond of jewelry and she has a few spectacular pieces that were purchased for her by Burton, including the Krupp Diamond, the Taylor-Burton Diamond, and the La Peregrina Pearl. The latter was once owned by Mary I, Queen of England. Burton sought out and found a portrait of the Queen wearing the pearl. He purchased it for his wife, but on discovering that the British National Gallery did not have an original portrait of Queen Mary I, the couple donated the painting. Good for them …

54. Marilyn Monroe played one in “Some Like It Hot” : UKE
“Some Like it Hot” is such a fun movie, released in 1959, directed by Billie Wilder. The big three in the cast are of course Marilyn Monroe, Tony Curtis and Jack Lemmon. A few years ago a stage version of “Some Like It Hot” was playing in San Francisco, with Tony Curtis in the cast. This time he played the older man who was wooing the Jack Lemmon character in the movie.

The term “box office” may date back to Shakespearean times. Back then patrons would deposit fees for seeing theater performances in boxes. The full boxes would be collected and placed in an office called, imaginatively, the “box office”.