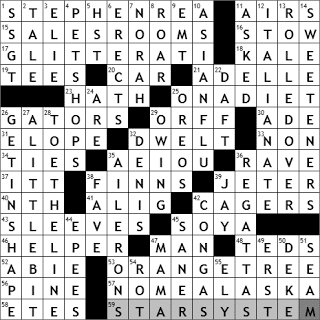 1. Loser to Al Pacino for Best Actor of 1992 : STEPHEN REA
Stephen Rea is an Irish actor, whose most famous role was that of the “retired” IRA man in the brilliant 1992 film “The Crying Game”. He also starred in the chilling movie “Stuck”, a 2007 film that is based on a true story about a woman who commits a hit and run on a homeless man. The woman leaves the scene of the crime with the victim still “stuck” in her windshield. The woman leaves the man to die in her garage. Chilling, eh? But as I said, a true story …

Al Pacino won the Best Actor Oscar in 1992 for his performance in “Scent of a Woman”.

17. Paparazzi targets : GLITTERATI
The glitterati are the fashionable celebrities. “Glitterati” is a melding of the words “glitter” and “literati”.

21. “Let’s Cook It Right” author Davis : ADELLE
Adelle Davis was a pioneering author in the world of nutrition. Back in the mid-1900s she was preaching that we should eat whole foods, should avoid food additives and that nutrition was the most important factor in maintaining health. Smart woman …

23. “She ___ Dian’s wit”: Romeo : HATH
In Shakespeare’s “Romeo and Juliet”, Romeo says, “She’ll not be hit/With Cupid’s arrow. She hath Dian’s wit.” Romeo isn’t talking about Juliet here, but instead he is referring to another girl from the Capulet household, Rosaline, in whom he was infatuated before meeting Juliet.

26. Sunshine State athletes : GATORS
The Florida Gators are the sports teams of the University of Florida, located in Gainesville. Sometimes the female teams are called the “Lady Gators”, and all of the fans make up the “Gator Nation”.

29. “Antigonae” opera composer : ORFF
Carl Orff was a German composer whose most famous piece of music is the dramatic cantata from 1937, “Carmina Burana”.

30. Honest ___ (drink brand) : ADE
Honest Ade is a brand of beverage made by the Honest Tea company of Bethesda, Maryland. According to “The New York Times”, Honest Tea is President Obama’s favorite non-alcoholic beverage.

33. Référendum vote : NON
In France a referendum (référendum) leads to votes of yes or no (oui ou non).

37. Onetime communications giant : ITT
International Telephone & Telegraph was formed in 1920 from the Puerto Rico Telephone Company. ITT divested its telecommunications business in 1986, today the company is known for its products in the field of water and fluids management, as well motion and flow control.

42. They’re not allowed to travel : CAGERS
In the early days of basketball, when a ball went out of bounds possession was awarded to the player who first retrieved the ball. This led to mad scuffles off the court, often involving spectators. As the game became more organized courts were routinely “caged”, largely because of this out of bounds rule, to limit interaction with the crowd. So basketball players are sometimes referred to as “cagers”. Quite sensibly, the out of bounds rule was changed …

45. Protein-rich seed : SOYA
What are known as soybeans here in the US are called soya beans in most other, English-speaking countries. So, I drink soy milk here in America, but when I am over in Ireland I drink “soya milk”.

48. Oscar-winning screenwriter Tally and others : TEDS
Screenwriter Ted Tally won his Oscar for the screenplay for “The Silence of the Lambs”.

52. Title character of 1920s Broadway : ABIE
“Abie’s Irish Rose” was originally a Broadway play by Anne Nichols that opened in 1922 and ran for over five years, at the time the longest run for any show in New York. The show then went on tour, and stayed on tour for an amazing 40 years.

53. Navel base? : ORANGE TREE
Navel oranges are the ones with the small second fruit that grows at the base, at the “navel”. The navel orange has been traced back to a single mutation that took place in an orange tree in Brazil many years ago. The mutation also rendered the fruit seedless and hence sterile, so it has been propagated using grafts.

57. Its newspaper is the Nugget : NOME ALASKA
“The Nome Nugget” is the weekly newspaper in Nome, Alaska. Established in 1900, it is the oldest newspaper in the whole state.

Dijon is a city in eastern France, in the Burgundy region. Dijon is famous for its mustard, a particularly strong variation of the condiment. The European Union doesn’t protect the name “Dijon” so anyone can use it on a label. That seems fair enough to me, given that 90% of the mustard made in and around Dijon is produced using mustard seed imported from Canada!

59. Old Hollywood’s method of promoting talent : STAR SYSTEM
Hollywood’s “star system” was the process of taking a young actor and promoting him or her by creating an image that the actor was expected to live up to. Often the star system involved the actor taking a new and glamorous name. Products of the star system were Cary Grant (born Archie Leach), Joan Crawford (born Lucille Fay LeSueur) and Rock Hudson (born Roy Harold Scherer, Jr.).

5. Cold war inits. : HST
Harry Truman wanted to go to West Point having served with the Missouri Army National Guard on active duty in WWI, but he couldn’t get in because of his poor eyesight. He didn’t have the money to get into college anywhere else. He had, however, studied for two years towards a law degree at the Kansas City Law School in the twenties, but never finished. So, Harry S. Truman was the only US President who did not have a college degree.

7. Singer Jones : NORAH
The beguiling Norah Jones, the daughter of famous sitar virtuoso Ravi Shankar, is one of my favorite singers. If you haven’t heard her sing “Come Away with Me”, you just haven’t lived …

25. Onetime meringue-filled treats : OREOS
When Nabisco introduced the Oreo cookie in 1912 there were two varieties made, one filled with cream, the other with lemon meringue. The meringue variety was the less popular of the two and was discontinued in the twenties.

28. Not be a rebel : TOE THE LINE
The origins of the phrase “toe the line” are disputed. My favorite explanation is that in the days of yore in the British Navy, barefooted seamen would have to appear for inspection with their toes all lined up along the edge of one of the planks on the deck.

32. Actor O’Hare of “Milk” : DENIS
Actor Denis O’Hare is most noted these days for his recurring role on the HBO vampire series “True Blood”, in which he plays Russell Edgington.

35. Wing parts : AILERONS
If you look along the trailing edge of the wing of a passenger jet, past the flaps and close to the wing’s tip there is a hinged surface that can move up or down. This is one of two ailerons, one on each wing, that usually act in concert with each other. They move to counteract any tendency for the aircraft to roll, to rotate around its longitudinal axis.

36. Sails events? : REGATTAS
The word “regatta” is Venetian dialect and was originally used to describe boat races among the gondoliers of Venice on the Grand Canal back in the mid-1600s.

39. Big name in late-night : JAY
Jay Leno is a car nut, and owns about 200 vehicles of various types. You can check them out on his website!

42. Dances with one person after another? : CONGAS
The conga line is a dance that originated as a Cuban carnival march. It became popular in the US starting in the thirties. The dance is apparently named after the Congo region of Africa, and was originated by slaves who were brought to Cuba from Africa.

44. They often have pistol grips : EPEES
The French word for sword is épée.

47. Remembered one? : MAMA
I think the reference is to the stage play “I Remember Mama” by John Van Druten, first performed in 1944, and adapted for the big screen in 1948 starring Irene Dunne.

49. “The even mead, that ___ brought sweetly forth …”: “Henry V” : ERST
In Shakespeare’s play “Henry V”, The Duke of Burgundy uses these words to describe the country of France, creating an image of a garden choked with weeds:

The even mead – that erst brought sweetly forth
The freckled cowslip, burnet, and green clover –
Wanting the scythe, all uncorrected, rank,
Conceives by idleness, and nothing teems
But hateful docks, rough thistles, kecksies, burs,
Losing both beauty and utility.

50. Hockey player’s “dangle” : DEKE
A deke, also known as a dangle, is a technique used to get past an opponent. “Deke” is a colloquial shortening of the word “decoy”.

54. Bushwa : ROT
“Bushwa” is rubbish, nonsense, rot. the term originated in the early 1900s and may be a derivative of “bourgeois”.

55. Minnesota city with Vermilion Community College : ELY
The city of Ely, Minnesota used to be called Florence. When it was discovered that there was already a town called Florence in the state, then the name was changed to Ely in honor of Samuel Ely, a miner from Michigan. Samuel Ely never once visited the town named after him …