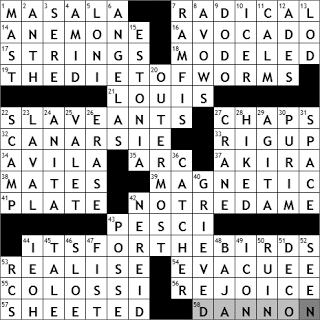 1. Spice mix used in Indian cuisine : MASALA
Masala is the Hindi word for “mixture”, and describes a mixture of spices. A dish named “masala” uses the spices incorporated into a sauce that includes garlic, ginger, onions and chili paste. Who doesn’t love Indian food?

14. Pasqueflower, e.g. : ANEMONE
Pasque flower is a wild plant found across most of the world, and is commonly called the meadow anemone. It is highly toxic if consumed, but in small doses has been used in herbal medications.

19. 16th-century assembly : THE DIET OF WORMS
A Diet was the general assembly of the estates of the former Holy Roman Empire. The most famous of these assemblies was the Diet of Worms, a 16th-century meeting that took place in the small town of Worms on the Rhine River in Germany. The main item on the agenda was discussion of the 95 theses of Martin Luther. Luther was summoned to the meeting, and found to be guilty of heresy.

21. Winner of a famous 1938 rematch : LOUIS
Joe Louis was defeated by German boxer Max Schmeling in 1936, an outcome that made Schmeling a hero in his homeland. Nazi party members claimed that the victory supported the claim of Aryan superiority. A much anticipated rematch was scheduled for 1938, to be held once again in Yankee Stadium. Prior to the fight, Louis was invited to the White House, where President Roosevelt told him “Joe, we need muscles like yours to beat Germany.” Louis won the rematch in spectacular style, knocking Schmeling to the canvas three times in a bout that lasted just two minutes and four seconds. Schmeling only managed to throw two punches.

22. Colonial captives : SLAVE ANTS
The Amazon ant is a remarkable creature. It has evolved to the extent that it can no longer care for its young or even provide for itself directly. What it can do is raid the nests of other ant species, stealing pupae and bringing them back to its own nest. When the pupae develop into maturity, the “enslaved” ants take care of the young Amazon ants and provide food for the whole colony.

27. Becomes cracked : CHAPS
The verb “to chap” means “to crack”, and has been used to mean a crack in the skin since way back in the 14th century.

32. Brooklyn neighborhood : CANARSIE
Canarsie is a neighborhood in Brooklyn in New York City. Canarsie is an anglicized version of the Lenape word for “fenced land”. The Lenapes were the Native Americans that sold the island of Manhattan to the Dutch for the princely sum of 60 guilders.

38. “The Newlywed Game” contestants : MATES
“The Newlywed Game” first went on the air on 1966 and has been resurrected a few times and is still being shown today. The couples often disagreed on air and started arguments, some of which actually led to divorces.

42. Site of Napoleon I’s coronation : NOTRE DAME
Despite having gone through the turmoil of the French Revolution, Napoleon Bonaparte was able to reestablish a hereditary monarchy in France, naming himself Emperor Napoleon I. He crowned himself in Notre Dame de Paris in 1804, and then crowned his wife Josephine as Empress.

43. “Raging Bull” co-star : PESCI
Joe Pesci got his big break in movies with a supporting role in “Raging Bull”, earning him an Oscar nomination early in his career. There followed a string of gangster roles played alongside De Niro, namely “Once Upon a Time in America”, “Goodfellas” and “Casino”. But I like his comedic acting best of all. He was marvelous in the “Home Alone” films, the “Lethal Weapon” series, and my personal favorite, “My Cousin Vinnie”. Pesci gets a mention in the stage musical “Jersey Boys”, which isn’t too surprising as he is one of the show’s producers.

44. Detractors’ comment concerning 19-Across? : IT’S FOR THE BIRDS
The idiom “it’s for the birds” implies that something is worthless. It comes from the notion that birds eat seed, which isn’t worth very much.

53. Convert to pounds? : REALISE
To realize is to turn something into cash. As “realize” is spelled “realise” in England, then the cash in this clue would be in pounds sterling.

55. Enormous statues : COLOSSI
A colossus (plural colossi) is an exceptionally large statue, the most famous of which was the Colossus of Rhodes. This was a statue of the god Helios that stood over 100 feet tall, on the Greek island of Rhodes. New York’s Statue of Liberty was designed to have similar dimensions. The Emma Lazarus poem that is inscribed on the pedestal of the Statue of Liberty is in fact titled “The New Colossus”.

57. Short-___ : SHEETED
I remember the first time I fell victim to the prank of “short-sheeting”, and very perplexing it is too! The idea is to leave the bottom sheet as is, and tuck the top sheet under the mattress at the head of the bed, just as one would do with a bottom sheet. Then fold the foot of the top sheet back up to the head of the bed, and fold it as one would do normally for a top sheet. Don’t tell your Mom it was me who told you how to do it though …

58. Choice in bottled water : DANNON
Danone is a French company that sells a wide range of food products, as well as bottled water. Here in the US Danone sell under the brand name “Dannon”. Danone owns a number of bottled waters, including Evian, Volvic and the only one that I think is worth buying, Badoit.

5. 1970s pinup name : LONI
Loni Anderson’s most famous role was that of Jennifer Marlowe on the sitcom “WKRP in Cincinnati”. Anderson has been married four times, most famously to actor Burt Reynolds from 1988 to 1993.

6. “___ Ashes” : ANGELA’S
“Angela’s Ashes” is a Pulitzer-winning memoir by Frank McCourt. It tells of McCourt’s upbringing in an impoverished family in Limerick in the west of Ireland.

7. High priest in “Aida” : RAMFIS
Verdi’s opera “Aida” is set in Egypt. Aida is an Ethiopian princess, and Ramfis is an Egyptian high priest.

9. Dummy : DODO
A dodo is a foolish person, a word that comes into English from the Portuguese “doudo”. “Doudo” was a slang term used by Portuguese sailors for the extinct bird that we now know as the dodo.

11. 0 on the Beaufort scale : CALM
The Beaufort wind scale is named after Irishman, Sir Francis Beaufort, a Rear-Admiral in the Royal Navy. Beaufort was a hydrographer as well as a career navy man.

13. City near Ben-Gurion Airport : LOD
The city of Lod lies just a few miles southeast of Tel Aviv, and is the home of Ben Gurion International, Israel’s main airport.

15. Member of the U.N. since 1991 and the E.U. since 2004 : ESTONIA
Estonia is one of the former Soviet Socialist Republics. It is located in Northern Europe on the Baltic Sea, due south of Finland. Estonia has been overrun and ruled by various empires over the centuries. Estonia did enjoy a few years of freedom at the beginning of the 20th century after a war of independence against the Russian Empire. However, the country was occupied again during WWII, first by the Russians and then the Germans, and reoccupied by the Soviets in 1944. Estonia has flourished as an independent country again since the collapse of the USSR in 1991.

23. Montreal suburb : LAVAL
Laval is the largest suburb of Montreal.

24. Novelist Brookner : ANITA
Anita Brookner is an English novelist, winner of the Booker Prize in 1984 for “Hotel du Lac”.

26. Indulge in character assassination? : ERASE
Get rid of those characters (letters or numbers say) written in error … erase them!

27. Washington Irving character : CRANE
Ichabod Crane is the protagonist in Washington Irving’s short story, “The Legend of Sleepy Hollow”. It’s thought that Irving “stole” the name from someone he actually knew, a captain in the army called Ichabod B. Crane.

29. Gut reaction? : AGITA
Agita is another name for acid indigestion.

30. Adar festival : PURIM
Purim is a Jewish festival commemorating the deliverance of the Jewish people from a plot to wipe them out by Haman the Agagite, as recorded in the Book of Esther. During the celebration of Purim, the Book of Esther is read aloud, once in the evening, and once the following morning. By the way, Esther is the only book in the Old Testament that doesn’t mention God.

36. Bench, for example : CATCHER
Johnny Bench is a former Major League Baseball catcher, who played for the Cincinnati Reds. Bench is now a spokesman for the Stryker Corporation, makers of medical implants. After a career as a baseball catcher his natural hip joint was in bad shape, so he had very successful replacement surgery in 2004.

42. Calypso, e.g. : NEREID
In Greek mythology, Nereus and Doris had fifty daughters, the sea nymphs or nereids. The nereids often hung around with Poseidon, and were generally very helpful creatures to sailors in distress. Mainly, they were to be found in the Aegean, where they lived with their father in a cave in the deep. Some of the more notable names of the nereids are: Agave, Asia, Calypso, Doris, Erato, and Eunice.

44. Architect ___ Ming Pei : IEOH
I. M. Pei (full name Ieoh Ming Pei) is an exceptional American architect, born in China. Of his many wonderful works, my favorite is the renovation of the Louvre in Paris, especially the Glass Pyramid in the courtyard. I’ve never visited the Rock and Roll Hall of Fame building in Cleveland, which he also designed, but from pictures I can see that there are elements that are very similar to Pei’s work at the Louvre. There is a steel and glass pyramid protruding from the roof of the Hall of Fame that looks like it came straight from Paris.

46. Liqueur flavor : SLOE
The sloe is the fruit of the blackthorn bush, and is the flavoring that gives gin its distinctive taste.

51. Retro style : DECO
Art Deco was the name given to the design and architecture of the 1920s, which actually had its roots in Belgium and then spread throughout Europe before arriving in North America. A celebrated example of the art deco form is the magnificent Chrysler Building in New York City, completed in 1930.