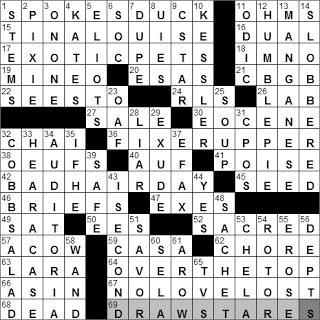 1. Aflac ad figure, facetiously : SPOKESDUCK
In 1999 Aflac was huge in the world of insurance but it wasn’t a household name, so a New York advertising agency was given the task of making the Aflac brand more memorable. One of the agency’s art directors, while walking around Central Park one lunchtime, linked the sound of “Aflac” with the quacking of a duck, and that duck has been “Aflacking” ever since …

11. Omegas represent them : OHMS
The unit of electrical resistance is the ohm (with the symbol omega), named after Georg Simon Ohm, the German physicist. Ohm was the guy who established experimentally that the amount of current flowing through a circuit was directly proportional to the voltage applied, (V=IR) a relationship that every school kid knows as Ohm’s Law.

15. She played Appassionata von Climax in Broadway’s “Li’l Abner” : TINA LOUISE
The actress Tina Louise is best known for having played the character Ginger Grant on the iconic TV show “Gilligan’s Island”. Louise had been a celebrated pinup girl in the late fifties, but her goal was to be an actress. She took the role of Ginger on “Gilligan’s Island” in 1964, after it was turned down by none other than Hollywood legend Jayne Mansfield.

16. Janus-faced : DUAL
Janus is a Roman god, usually depicted with two heads, one looking to the past, and the other to the future. As such, as a god he is often associated with time.

A chinchilla is a rodent found in the Andes mountains in South America. It is a little larger than a squirrel, and has velvet-like fur. It takes its name from the local Chinicha people who made clothing out of the chinchilla’s fur. Chinchillas are quite rare in the wild now as they been hunted for their fur, but there are plenty of farm-raised chinchillas around supporting the fur industry, I’m sad to report …

Boa constrictors are members of the Boidae family of snakes, all of which are non-venomous. Interestingly, the female boa is always bigger than the male.

Sal Mineo’s most famous role was that of John “Plate” Crawford, the kid who was in awe of the James Dean character in “Rebel Without a Cause”. Sadly, Sal Mineo was murdered in in 1976, when he was just 37 years old. He was attacked in the alley behind his Los Angeles apartment and stabbed through the heart. When an arrest was made it was discovered that the murderer had no idea that his victim was a celebrity and was just intent on robbery.

24. Literary inits. : RLS
Robert Louis Stevenson’s most celebrated work I’d say is “Treasure Island”, originally written as a series for a children’s magazine in 1881. I remember it as the first “real” novel I read as a youngster …

30. Epoch when bats first appeared : EOCENE
The Eocene Epoch lasted from 56 to 34 million years ago, and is noted for the emergence of the first mammals on the planet.

32. Starbucks offering : CHAI
Chai is a drink made from spiced black tea, honey and milk, with “chai” being the Hindi word for “tea”. We often called tea “a cup of char” growing up, with “char” being our slang word for tea, derived from “chai”.

38. Quiche ingrédients : OEUFS
The classic dish called quiche is made with eggs (“oeufs” in French). Even though the quiche is inextricably linked to French cuisine, the name “quiche” comes from the German word for cake, “Kuchen”.

40. “___ Ferienreisen” (Strauss polka) : AUF
Josef Strauss is one of the lesser known members of the Strauss family, a son of Johann Strauss I and brother of Johann Strauss II. As a young man his father felt that Josef was better suited for a career outside of music and so he trained as an engineer. Josef has a notable mechanical design to his credit, a street cleaner that used rotating brushes, a horse-drawn version of what we see in the streets today. Josef’s most famous musical work is probably the “Pizzicato Polka” which he co-wrote with his brother Johann II.

“Auf Ferienreisen!” is a polka written by Josef Strauss, the name of which translates to “On a Holiday!”

49. Put down a can? : SAT
A blog reader has kindly informed me that the reference here is to the American slang word “can” meaning one’s rear, posterior. So putting down one’s can, is sitting. I have so much to learn …

50. Telecom techies : EES
Electrical engineers are in great demand in the telecom industry.

57. “___ on the Line” (Thomas the Tank Engine story) : A COW
Oh my goodness, my kids just loved Thomas the Tank Engine. The television show is based on the series of books by the Reverend W. V. Awdry and his son. The TV series was remarkable in that it attracted some celebrity narrators, the first being Ringo Starr. I think American audiences might have been more familiar with George Carlin, and then Alec Baldwin. Pierce Brosnan also had a go, narrating a TV special. I remember being on a flight one time with Ringo Starr (we didn’t sit together!). When I told our kids’ babysitter a few days later about my celebrity encounter she was marginally impressed although I had to explain that he was the drummer for the Beatles. When I added that Ringo was also the narrator for the “Thomas the Tank Engine” show, she nearly fainted with excitement. A generation gap …

59. Residencia : CASA
A house (casa) is a residence (residencia) in Spanish speaking locales.

63. Byron poem : LARA
George Gordon Byron, known simply as “Lord Byron”, was an English poet active in the early 1800s. He was as famous for the wild excesses in his personal life as he was for his poetry. He lived for many, many years outside of England, and fought for revolutionaries in both Italy and Greece, eventually dying from a fever contracted while fighting against the Ottomans.

“Lara, A Tale” is a poem by Lord Byron. Lara is a Count, returning to the British Isles after years traveling through the orient.

Down
1. Watch things : STEMS
The stem of a watch is the knob used for changing the time.

3. When a quick snap may happen : ON ONE
The quarterback starts each play in football with a “snap”. The quarterback announces to his teammates the exact moment of the snap by calling out signals, usually including the word “hut” one or more times in a prearranged sequence.

Kate Bush has a unique, experimental singing style, with her most famous recording being “Wuthering Heights” from 1978. I also love the subsequent releases “Babooshka” and “The Man with the Child in His Eyes”.

Kate Jackson is known for playing one of the original “Charlie’s Angels”, Sabrina Duncan (she was always my favorite Angel!). The shooting schedule for the show prevented her from taking other roles, including one that was picked up instead by Meryl Streep, the title role in “Kramer vs Kramer” released in 1979.

5. Writer known as Old Possum, and his family : ELIOTS
T. S. Eliot was given the nickname of “Old Possum” by Ezra Pound, after he published a book of light verse called “Old Possum’s Book of Practical Cats”. The book of verse is of course the basis for the renowned stage musical, “Cats”.

8. They’re hung across roads : UIES
They would be u-turns.

9. ___ Optics (telescope maker) : CSTAR
Cstar Optics was founded in 1997 and specializes in the production of telescopes and other viewing instruments.

12. Crow : HUMBLE PIE
The phrase “eat crow”, an alternative to “eat humble pie” perhaps refers to the fact that cooked crow may be edible, but is not a great food choice.

13. Iron’s preceder on the periodic table : MANGANESE
Most of the manganese produced today is used in the steelmaking industry, as it is essential to the manufacture of low-cost stainless steel.

23. Palooka : OAF
The word “palooka” was originally used to describe a mediocre prizefighter and dates back to the 1920s. Then there was a comic strip called “Joe Palooka”, and I guess the meanings got melded somehow.

31. Navy equivalents of S.F.C.’s : CPOS
A Chief Petty Officer is a non-commissioned officer in the Navy and Coast Guard. The word “Petty” is derived from the French word “petit” meaning “small”.

32. High-fat dish with greens : COBB SALAD
Ty Cobb’s first cousin, Robert H. Cobb, owned the Brown Derby chain of restaurants. One of his regular customers was the famous Sid Grauman, who ran Grauman’s Chinese Theater. Late one night, Grauman asked for a snack, and Cobb came up with a chopped salad simply made from ingredients he happened to have in the refrigerator. Grauman liked it so much that continued to request it, and the Cobb salad was born.

34. Assembly places : AUDITORIA
“Auditorium” is the Latin word for a lecture room, literally meaning a “place where something is heard”. “Auditorium” is derived from “audire” the Latin for “to hear”.

35. “___ Should Ever Leave You” (Tom Jones song) : IF HE
Tom Jones, now he has a real voice, and is a great showman. I saw him in Las Vegas many, many moons ago, one of the best Vegas shows I’ve ever attended. Although Tom Jones is a carefully selected stage name (his was born Thomas Woodward) the name isn’t too far from reality as Jones is his mother’s maiden name. The stage name was chosen by his manager to capitalize on the appeal of “Tom Jones”, a filmed version of the Henry Fielding novel that was having a successful run at the time. The name also emphasized Tom’s Welsh roots.

37. High-tech transmission : EFAX
An efax is just like a fax, an image of document that is sent over the Internet, rather than over a telephone line between two fax machines.

48. Bag in a trunk : SACHET
A sachet is a small packet of perfumed powder left in perhaps a closet or trunk to scent clothes. The word “sachet” is a diminutive of the French word “sac” meaning “bag”.

53. Crayfish claw : CHELA
The word “chela” comes from the Greek “khele” meaning “claw”, and is the name given to the claw of a crustacean.

55. Jagged : EROSE
An edge that is “erose” is irregularly notched or indented.

60. One of Swoosie’s co-stars on “Sisters” : SELA
Sela Ward turns up in crosswords a lot. She played Teddy Reed in the TV show “Sisters” in the nineties, and was in “Once and Again” from 1999-2002. I don’t know either show, but I do know her from the medical drama “House” in which she played the hospital’s lawyer and Greg House’s ex-partner. That was a fun role, I thought. Now she has turned up on CSI: NY, a very welcome and much-needed addition to the cast …