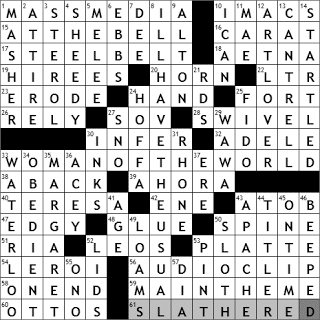 10. Many people surf on them : IMACS
The iMac is a desktop computer platform from Apple, introduced in 1998. One of the main features of the iMac is that it is an “all-in-one” design, with the computer console and monitor integrated.

16. A point is a division of one : CARAT
A carat is a unit of mass used to measure gemstones and pearls. There are one hundred points in a carat, each equal to 2 milligrams, so a carat is equal to 200 milligrams.

18. Big name in coverage : AETNA
When Aetna was founded, the name was chosen to invoke images of Mt. Etna, the European volcano.

25. With 43-Down, storied Bronx station house : FORT
(43. See 25-Across : APACHE)
“Fort Apache, The Bronx” is a crime drama released in 1981, starring Paul Newman. I must admit that I haven’t seen the movie but I did read the novel “Fort Apache” many years ago. I always assumed the film was based on the book (as the book is about a police precinct station in the Bronx) but the producers of the movie say the two aren’t related. The author of the book agrees with me, and sued the producers, but the courts decided for the defendants.

32. “Die Fledermaus” maid : ADELE
“Die Fledermaus” is a really lovely operetta composed by Johann Strauss II, first performed in 1874. “Fledermaus” is German for “bat” (literally “flying mouse”). The title comes from the fact that one of the characters (Falke) was abandoned drunk, dressed as a bat, in the center of town one evening. As he was subject to ridicule, the machinations of the story are designed as revenge for Falke’s humiliation.

40. “In My Own Words” missionary : TERESA
Mother Teresa was born in Albania in 1910, when she was known as Agnes Gonxha Bojaxhiu (“Gonxha” means “little flower” in Albanian). She left home at the age of 18 and joined the Sisters of Loreto, and headed to Loreto Abbey in Rathfarnham in Dublin, Ireland in order to learn English. Her goal was to teach in India, and English was the language used for instruction by the nuns. After Mother Teresa passed away in 1997, she was beatified by Pope John Paul II, a step on the road to canonization. In order for her to be beatified there had to be documented evidence of a miracle that was performed due to the intercession of Mother Teresa. The miracle in question was the healing of a tumor in the abdomen of a woman due to the application of locket containing a picture of Mother Teresa. Documentation of a second miracle is required for her to be declared a saint.

42. Suffix with ethyl : -ENE
An alkene is an organic compound made up of carbon and hydrogen atoms. It differs from an alkane in that it has at least one C=C double bond. The simplest alkene is the gas ethylene, a major raw material used in the manufacture of plastics (like polyethylene).

52. 13 religious heads : LEOS
The first pope named Leo is now known as Pope Saint Leo the Great, and is famous for having met with the feared Attila the Hun and persuading him to turn back his invading force that was threatening to overrun Western Europe.

53. Gothenburg’s river : PLATTE
Gothenburg, Nebraska is in the Platte River Valley, and is named after Gothenburg, Sweden.

The Platte River used to be called the Nebrakier, which is an Oto word meaning “flat river”. Later the French word for “flat” was used as the name, “Plate”. Later this became “Platte”, the phonetic spelling of the French.

60. Physics Nobelist Stern and others : OTTOS
Otto Stern resigned his position at the University of Hamburg in 1933 when the Nazis seized power in Germany. He moved to the US, eventually becoming professor emeritus at Berkeley. Back in 1922 he had performed a famous experiment with Walther Gerlach (the Stern-Gerlach Experiment) and for this work he was awarded the Nobel Prize in Physics in 1943. However, the citation omitted any mention of Gerlach, as he was still actively working in Nazi Germany at the time.

Down
1. Advance man? : MASHER
“Masher” is a slang term for a man who makes persistent and unwelcome advances on women.

3. Kind of ester : STEROL
Sterols occur in nature in both plants and animals. The most famous of the animal sterols is cholesterol, found in all animals as it is a vital component of cell walls. Cholesterol is made within the body, so it isn’t a necessary part of the diet.

Esters are very common chemicals. The smaller, low-molecular weight esters are often pleasant smelling and are found in perfumes. At the other end of the scale, the higher-molecular weight nitroglycerin is a nitrate ester and is very explosive, and polyesters are huge molecules and a type of plastic.

4. Ally of New York City : SHEEDY
Ally Sheedy is best known as a member of the “Brat Pack”, so she appeared in “The Breakfast Club” and “St. Elmo’s Fire”. She was in another of my favorite films, “War Games”. To be honest, I haven’t enjoyed the movies that she has appeared in since those early days.

6. Is refluent : EBBS
Refluent is an archaic adjective, meaning ebbing, coming from the Latin word “refluere”, flowing back.

Famously, Glenn Miller signed up with the US Air Force Band during World War II, and disappeared while flying from the South of England to entertain troops that had just liberated Paris. He is still listed as missing in action …

11. Murray of silents : MAE
Mae Murray was an actress famous during the silent film era. She had a unique look, earning her the nickname “The Girl with the Bee-Stung Lips”.

24. He was declared dead in absentia in 1982 : HOFFA
Jimmy Hoffa headed off to meet with two Mafia leaders at a restaurant in a suburb of Detroit on July 30, 1975. The two men he was supposed to meet denied any appointment was made, and they were seen in public in other locations far from the restaurant. Hoffa was spotted by passers by in the restauranparking lot, the last time he was ever seen. His wife reported him missing later that night, and the resulting police investigation failed to find Hoffa or his body. Hoffa was declared legally dead in 1982, seven years after he disappeared.

31. Neighbor of Loire and Ain : RHONE
Rhône is a department in central eastern France, named after the Rhône River. The largest city in the department is Lyon.

33. Undoing : WATERLOO
The term “waterloo” is used to denote a final, irreversible defeat, named for the famous, final battle fought by Napoleon in which he lost to the British forces led by the Duke of Wellington.

36. ___-deucey : ACEY
Acey-deucy is a fast-played variant of backgammon. Apparently the game has been a favorite with members of the armed forces since the days of WWI.

37. “___ thou and peace may meet”: Shelley : ERE
The English Romantic poet Percy Bysshe Shelley had strong views on vegetarianism. He was dedicated to the cause of all sentient beings, believing that the slaughter of animals by humans for the use of food was a barbaric practice. He wrote a famous essay on the subject called “A Vindication of Natural Diet” in 1813, and some lines of poetry including:

“The leaves of wasted autumn woods shall float around thine head:
The blooms of dewy spring shall gleam beneath thy feet:
But thy soul or this world must fade in the frost that binds the dead,
Ere midnight’s frown and morning’s smile, ere thou and peace may meet.”

55. “Walking on Thin Ice” singer : ONO
Yoko Ono was born into a prosperous Japanese family, and is actually a descendant of one of the emperors of Japan. Her father moved around the world for work, and she lived the first few years of her life in San Francisco. The family returned to Japan, before moving on to New York, Hanoi, and back to Japan just before WWII, in time to live through the great fire-bombing of Tokyo in 1945. Immediately after the war, the family was far from prosperous. While Yoko’s father was being held in a prison camp in Vietnam, her mother had to resort to begging and bartering to feed her children. When her father returned, life started to return to normal, and Yoko was able to attend university, and was the first woman to be accepted into the philosophy program of Gakushuin University.

57. División del mes : DIA
There are quite a few days (dias) in a months (mes) in Spanish.