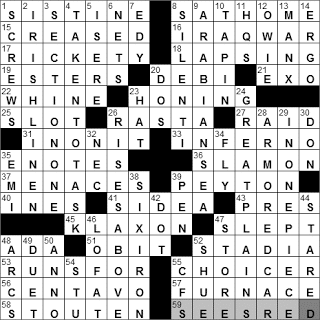 Today’s Wiki-est, Amazonian Googlies
Across
1. Rome’s ___ Choir : SISTINE
The Sistine Chapel Choir is one of the oldest choirs in the world. The choir has its roots in the Middle Ages during the papacy of Sylvester I (314-35), when the regular company of singers was called the “schola cantorum” (“school of singers”).

16. Subject of 2002 Senate authorization : IRAQ WAR
The Iraq Resolution authorizing the use of military force passed the US Congress in October 2002. The vote passed in the House of Representatives with 297 Ayes, 133 Nays (including 6 Republicans and 1 independent). The vote passed in the Senate with 77 Ayes and 23 Nays (including one Independent and one Republican, Lincoln Chafee, now the Independent Governor of Rhode Island).

17. Unstable : RICKETY
The word “rickety”, meaning liable to fall down, has been in use since the 1680s, and is derived from the disease “rickets”. Rickets is a softening of the bones in children due to a deficiency of vitamin D, leaving the legs bowed and the sufferer unsteady on his or her feet.

19. Glycerides, e.g. : ESTERS
Esters are very common chemicals. The smaller, low-molecular weight esters are often pleasant smelling and are found in perfumes. At the other end of the scale, the higher-molecular weight nitroglycerin is a nitrate ester and is very explosive, and polyesters are huge molecules and a type of plastic.

20. Actress Mazar of HBO’s “Entourage” : DEBI
Debi Mazar plays Shauna Roberts on the HBO series “Entourage”. You might have seen her on “Dancing with the Stars” not so long ago, although she didn’t do so well, being eliminated in the third week.

21. Prefix with biology : EXO-
Exobiology is the study of life in the universe, and central to the work of exobiologists is the search for life beyond earth. A fascinating field, I would imagine …

25. Gambler’s opening? : SLOT
Slot machines earned the nickname “one-armed bandits” simply because they had “one arm”, the handle pulled to operate the machine, and they robbed you of all your money!

26. Person with dreads : RASTA
I must admit that I don’t really understand Rastafarianism. I do know that a Rasta, like Bob Marley, is a follower of the movement. Some say it is a religion, some not. It does involve the worship of Emperor Haile Selassie I of Ethiopia.

Dreadlocks are matted coils of hair nowadays usually formed intentionally, although if one lets hair grow without grooming it naturally grows into twisted and matted dreadlocks. The hairstyle is associated with the Rastafarian movement in which the term “dread” is a very positive one, meaning “fear of the Lord”.

33. Source of the line “Midway upon the road of our life I found myself within a dark wood …” : INFERNO
Dante Alighieri’s “Divine Comedy” is an epic poem dating back to the 14th century. The first part of that epic is “Inferno”, which is the Italian word for “Hell”. In the poem, Dante is led on a journey by the poet Virgil, starting at the gates of Hell on which are written the famous words “Abandon all hope, ye who enter here”.

35. Brief online messages : E-NOTES
Don’t forget to put your e-note in an e-envelope and put an e-stamp on it …

39. Place name in 1960s TV : PEYTON
Grace Metallius’s 1956 novel “Peyton Place” had such an impact that to this day, the expression “Peyton Place” is used to describe a place where the residents have sordid secrets. The novel has it all, including incest, abortion, adultery, lust and murder. No wonder it stayed on “The New York Times” bestseller list for 59 weeks …

40. Dom Pedro’s ill-fated wife : INES
Inês de Castro led an eventful life, and even her “life after death” was full of drama. Inês was a lady-in-waiting to Constance of Castille, the wife of Prince Pedro, heir to the Portuguese throne. Constance and Inês came to Portugal in 1340 just after the marriage, at which time the Prince fell out of love with his new wife and into love with Inês. Constance died just a few years later, but the Prince was not allowed to marry Inês as she was deemed unsuitable. In frustration at the refusal of his son to give up the illicit relationship, King Afonso IV ordered Inês killed. The poor woman was detained and decapitated, right in front of her young child. In revenge, Pedro tracked down the king’s thugs and executed them publicly ripping out their hearts. Some years later, Pedro ascended to the throne and claimed that he had been secretly married to Inês all along and that she was therefore the lawful queen. According to legend, he had her body exhumed and forced his whole court to swear allegiance to his queen by kissing the hand of her corpse.

45. Loud horn : KLAXON
A klaxon is a loud horn, and “klaxon” is one of those words that has taken on the name of a particular brand. The original klaxon was a car horn manufactured and sold by the Klaxon Company.

51. Departure info? : OBIT
“Obituary” comes from the Latin “obituaris”, the word for the record of a death of a person, although the literal meaning is “pertaining to death”.

56. Bit of change in Cuba : CENTAVO
“Centavo” is a Spanish and Portuguese word, and is used for the coin that represents 1/100 of the basic monetary unit of quite a few countries, including Cuba. “Centavo” comes from the Latin “centum” meaning “one hundred” and “-avo” meaning “portion, fraction”.

2. Overseas fabric spun from flax : IRISH LINEN
Irish linen is woven in Ireland as one might expect, but the flax from which the fibers come are imported from France, Belgium and the Netherlands.

5. French department or a river that runs through it : ISERE
The Isère gives its name to the French Department of Isère, located partly in the French Alps. Isère gave its name to a somewhat famous ship the Isère, which delivered the Statue of Liberty from France to America in 214 crates.

7. Ice cream eponym : EDY
Dreyers’ ice cream sells its products under the name Dreyers in the Western United States, and Edy’s in the Eastern states. The company’s founders were William Dryer and Joseph Edy.

9. Indus outlet : ARABIAN SEA
The Indus river rises in Tibet and flows through the length of Pakistan and empties into the Arabian Sea, the part of the Indian Ocean lying to the west of the Indian subcontinent. The country of India takes its name from the Indus river, as “India” used to be the name of the region of Pakistan along the eastern banks of the river.

13. ___ cat : MANX
I’ve seen Manx cats by the dozen. They’re found all over the Isle of Man (hence the name “Manx”) located in the middle of the Irish Sea. Manx cats have no tails, they really don’t.

14. Consequently : ERGO
“Ergo” is the Latin word for “hence, therefore”.

20. Mohawk and others : DOS
Here is another example of a difference in terminology on either side of the Atlantic. What we call the Mohawk hairstyle is known as a “Mohican” over there. The Mohawk hairstyle is named after the Mohawk nation, who wore their hair in the same fashion. The Mohawk style however, has been around for a long time elsewhere in the world. There was a well-preserved male body found in a bog near Dublin in Ireland in 2003. The body is about 2,000 years old and had the Mohawk cut.

32. Toshiba competitor : NEC
NEC is the name that the Nippon Electric Company, chose for itself outside of Japan after a re-branding exercise in 1983.

34. Zipper hider : FLY
The concept of flying, flapping wings, led to the use of the word “flap” as a piece of extra cloth covering a seam or opening. Initially fly was used to describe a tent flap, and eventually a flap of cloth covering buttons on a garment.

35. Owner of Capitol Records and Parlophone : EMI
EMI is a British music company, with the acronym originally standing for Electric and Musical Industries.

38. Spade mashie : SIX IRON
Most of the irons in a golfbag had a non-numerical name in days gone by:

50. ___ mundi : ANNO
Anno Mundi is abbreviated as AM, and translates from the Latin as “in the year of the world”. The AM calendar dates from the year of creation, so the actual year changes in different versions depending on which year is understood to be “year 1”.

54. Poker legend Ungar : STU
Many followers of the game believe that Stu Ungar was the best ever player of Texas hold ’em. Ungar won about $30 million playing cards during his life, yet he died penniless. He was found dead in a Las Vegas motel room in 1998 having passed away from heart failure at 45 years of age, brought on by years of drug abuse.

55. Ty Cobb and Willie Mays, positionally: Abbr. : CFS
Ty Cobb was one of the richest baseball players of all times. When he retired he was a major stockholder of the Coca-Cola Corporation, and when he passed away he had an even bigger investment in General Electric. He left an estate worth about $86m in 2008 dollars.

Willie Mays’ nickname was the “Say Hey Kid”, although his friends and teammates were more likely to refer to him as “Buck”. When Mays was inducted into the Baseball Hall of Fame, he was asked who was the best player he’d seen in the game. He replied, “I don’t mean to be bashful, but I was.”