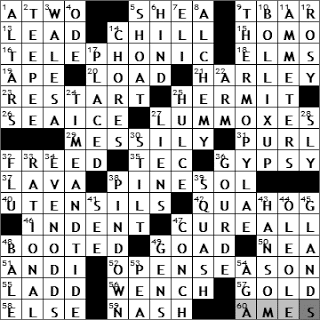 5. Where the Beatles opened their 1965 North American tour : SHEA
The Beatles concert tour of 1965 was the band’s second, after the phenomenal success of their debut appearances in America the prior year. The opening engagement was at Shea Stadium, a concert at which the Beatles only played for 30 minutes. The audience of over 55,000 people set a new record for concert attendance, as did the gate of $304,000 (seems small now, huh?). The amplifiers in the stadium were completely overpowered by the noise of the crowd, and the Fab Four literally couldn’t hear themselves sing. At one point John Lennon just started goofing around as no one could hear the music, and starting playing keyboards with his elbows!

9. Mountain climber? : T-BAR
A T-bar is a type of ski lift in which the skiers are pulled up the hill in pairs, with each pair sitting on either side of T-shaped, metal bar.

15. Our genus : HOMO
The Homo genus includes, of course, the species Homo sapiens (modern humans), but we’re the only species left. All the other species that were part of the genus Homo are all extinct. The last known species related to humans was Homo neanderthalensis (Neanderthal Man) which died off about 24,000 years ago. However, another species was discovered in Indonesia in 2003 that has been dubbed Homo floresiensis (Flores Man … sometimes called “hobbit”), and it may possibly have lived as recently as 12,000 years ago. Watch this space …

21. Road hog? : HARLEY
The Harley-Davidson motorcycle company was started up in the very early 1900s by two childhood friends, William Harley and Arthur Davidson, . Their first design was in effect an engine hooked up to a pedal bicycle, but the 116 cc cylinder capacity simply couldn’t generate enough power to get up the hills of their native city of Milwaukee. The pair came up with a redesigned model that had a cylinder capacity of 405 cc, which the partners built in a shed at the back of Davidson’s house. In 1906 they built their first factory, located where the company’s headquarters is to this day, on Juneau Avenue in Milwaukee, Wisconsin.

25. Definitely not a company man? : HERMIT
Hermit’s tend to shy away from company …

26. Endangered Arctic presence : SEA ICE
Sea ice is of course frozen seawater, and with the salt content it freezes at below 0 degrees centigrade, at about -1.8 degrees. What is interesting, and maybe useful, is that as sea ice forms it loses its salt, and so can be collected and melted down into freshwater.

27. Cabbageheads : LUMMOXES
“Lummox” and “cabbagehead” are words that are used to describe a “stupid person”. The word “lummox” comes from East Anglian slang (located northeast of London). It is probably a contraction of “lumbering ox”.

31. Knit alternative : PURL
As all of us knitters knows (!) the purl stitch and knot stitch are very similar, one being sort of the inverse of the other. Yes, I can knit. I made a bet with a group of knitting female students when I was at college and made a fisherman sweater (or Aran jumper , as we call them) for myself. I made quite a few of them in the end, as girlfriends when they heard the story, invariably insisted that I knit one for them too. Don’t tell the guys, but knitting is really, really calming and therapeutic …

35. Spade, e.g., for short : TEC
Private detective Sam Spade was created by Dashiell Hammett and appears in “The Maltese Falcon”.

36. 1959 Broadway hit with the song “All I Need Is the Girl” : GYPSY
“Gypsy” is a 1962 musical film based on the book by Gypsy Rose Lee titled “Gypsy: A Memoir”. Stars of the movie were Natalie Wood as Louise Hovick (Gypsy’s real name) and Rosalind Russell as Gypsy’s mother, Rose Hovick. By the way, Gypsy became a fiction author in 1942 when her mystery thriller was published called “The G-String Murders”. The novel was adapted into a movie a couple of years later, released as “Lady of Burlesque

37. Rolling stone? : LAVA
Lava rolls down the side of a volcano, and cools to form”stone”.

38. “The powerful scent of real clean” sloganeer : PINE-SOL
Pine-Sol first came on the market in 1929, a cleaner based on pine oil.

42. Edible clam : QUAHOG
Quahog is another term for “hard clam”, the clam that is commonly harvested on the eastern shores of North America. The quahog may also be called the “chowder clam”. Hard clams are the largest of the clams commonly sold, with the cherrystone clams being a little smaller.

46. Put right? : INDENT
To indent a line of text is to move it to the right (assuming one is writing in English!).

47. What snake oil is, supposedly : CURE-ALL
There is actually a real snake oil, a traditional Chinese medicine made from fat extracted from snakes. You can buy snake oil at traditional Chinese pharmacies and it is supposed to be very efficacious in the treatment of joint pain. Snake oil was introduced into the US by Chinese laborers working on the construction of the Transcontinental Railroad. Medicine salesmen started to ridicule the snake oil as it competed with their own remedies, and in time the term “snake oil” became associated with any cure-all potion.

55. Angel Cheryl : LADD
Cheryl Ladd’s most famous role was that of Kris Monroe in television’s “Charlie’s Angels”. Ladd replaced Farrah Fawcett-Majors when she opted out of the show. Cheryl Ladd was the daughter-in-law of famed Hollywood actor Alan Ladd, as she was married to Ladd’s son, David. After the couple divorced, Cheryl retained the Ladd name.

59. Ambassador of old autodom : NASH
The Nash Ambassador was produced by Nash automobiles from 1932. It was manufactured by AMC up until 1974.

2. Home on the range : TEEPEE
A tepee (also called a tipi and teepee) is a cone-shaped tent traditionally made from animal hides, and used by the Great Plains Native Americans. A wigwam is a completely different structure, and is often a misnomer for a tepee. A wigwam is a domed structure built by Native Americans in the West and Southwest. The wigwam can also be covered with hides, but more often was covered with grass, reeds, brush or cloth. A wigwam was also built as a more permanent structure.

3. Shipyard worker fired in 1976 : WALESA
Lech Walesa used to be an electrician in the Gdansk Shipyards in Poland. He was active in the trade union movement in the days when unions were not welcome behind the Iron Curtain. His efforts resulted in the founding of Solidarity, the first independent trade union in Soviet controlled territory. For his work, Walesa was awarded the Nobel Peace Prize in 1983, and in 1990 he became the first democratically elected President of Poland. He has lost support in Poland in recent years, but is a very popular booking on the international speaking circuit.

5. Young hog : SHOAT
“Shoat” is a name given to a young hog, after it has been weaned.

7. 2010 title role for Denzel Washington : ELI
“The Book of Eli” is one of those “end of the world” type movies, with Denzel Washington playing a tough guy traveling across what is left of the United States after some apocryphal event.

9. Where Persia defeated Sparta in 480 B.C. : THERMOPYLAE
The Battle of Thermopylae took place in 480 BC, fought between an alliance of Greek city-states led by Sparta, and the Persian Empire of Xerxes. The Greeks chose the narrow pass of Thermopylae to make a stand against the advancing Persian army, as there they could minimize the advantage that the Persians had with their large army. The pass of Thermopylae was so narrow that only one chariot could pass through at a time. Famously, the vastly outnumbered Spartan forces held this pass with hand-to-hand combat for two full days, until a local resident showed the Persians a way around the pass so that the Greek army could be attacked and annihilated from the rear.

10. Bungle : BOLLIX UP
“Bollix up” is a term absorbed from British English, and is yet another example of terms readily used here in the US that are considered very rude back in the UK. The term is of Anglo-Saxon origin, a reference to “testicles”.

24. They won’t wait, in a phrase : TIME AND TIDE
Versions of the idiomatic expression, “Time and tide wait for no man” have been around since the early 1200s. Even though the phrase seems to conjure up images of King Canute trying to hold back the tide, there is no connection to the sea at all. Back in the 1200s the word “tide” wasn’t associated with ocean currents but rather to a period of time, as in yule-tide, Christmas-tide etc. So basically the idiom says that man can’t put a halt to time, despite what your plastic surgeon might tell you …

27. They’re put on many cars : LIENS
A lien is the right that one has to retain/secure someone’s property until a debt is paid.

28. Rocky, really : SLY
If ever there was a movie that defines a career breakthrough for an actor, it would have to be “Rocky” for Sylvester Stallone. Stallone was a struggling actor in 1975 when a Muhammad Ali fight inspired Stallone to write a screenplay for a boxing movie, which he did in just three days. His efforts to sell the script went well but for the fact that the interested studios wanted a big name for the lead role, and Stallone was determined to be the star. Stallone persevered and “Rocky” was made with him in the lead, and the movie won three Oscars. “Sly” Stallone had arrived …

32. W.H.O. concern : FLU
The World Health Organization is a United Nations agency. The WHO was set up in 1948, and has its headquarters in Geneva, Switzerland.

34. Oxymoronic chances : EVEN ODDS
The word “oxymoron” is in itself an oxymoron, as it is derived from the Greek words “Oxys” and “moros” meaning “sharp” and “stupid”.

39. Game played with a dotted ball : SQUASH
Squash was one of the big sportsin my home town in Ireland, so I played a lot when I was younger. It is very similar to racquetball, with one huge difference; the ball used in squash has very little bounce and really “dies” in the corners of the court. Balls are made that have different degrees of bounce, and the amount of bounce (and speed) is indicated by a colored dot or dots marked on the surface.

43. Victorian taxi : HANSOM
A hansom cab is a very specific design of horse and buggy that was patented by Joseph Hansom in 1834 in England. The “cab” in the name is short for “cabriolet”, a prior design of carriage on which the hansom was based. The hansom first brought the term “cab” into English.

44. Soccer cheer : OLE OLE
“Ole Ole Ole!” is chanted at soccer games by many Spanish speaking (or shouting) fans. I am very proud to claim that the fans of the Irish national team have adopted the chant as their own, and it can be heard practically non-stop when Ireland is playing (with some inventive melody behind it!).

47. Beach souvenir : CONCH
Although conch is now used as a generic term for largish sea snails and their shells, the true conch belongs to a specific group of gastropods. The “meat” of a conch is very popular, the second most popular edible snail after “escargots”. The conch shell can of course be used as a wind instrument, and the true conch is also a good source for pearls.

49. Washington, Grant and others: Abbr. : GENS
Washington and Grant were famous generals.

53. Snow ___ : PEA
The snow pea lives up to its name. It actually can continue growing even when it is snowing.

54. Ottoman officer : AGA
An aga, or agha, is a title that was used by both civil and military officials in the Ottoman Empire.