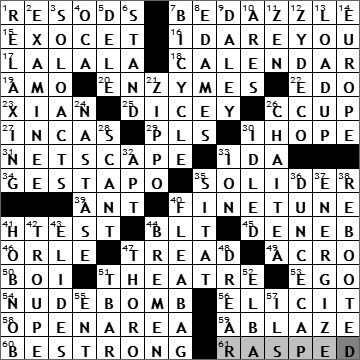 Across
15. Missile that sank a British destroyer in the Falklands War : EXOCET
The Exocet is an anti-ship missile built by the French, and often used in combat in the eighties. The name comes from “Exocoetidae”, the flying fish. Exocets were famously used in the Falklands War to great effect by the Argentine forces. Air-launched Exocets irreparably damaged the British destroyer HMS Sheffield during the conflict.

20. Causes of breakdowns : ENZYMES
Enzymes are basically catalysts, chemicals that act to increase the rate of a particular chemical reaction. So, for example, starches will break down in to sugars over time, especially under the right conditions. However, in the presence of the enzyme amylase (found in saliva, say) this production of sugar happens very, very quickly.

22. Old Asian capital : EDO
Edo is the former name of the Japanese capital city of Tokyo. Edo was the seat of the Tokugawa shogunate, a feudal regime that ruled from 1603 until 1868.

23. Capital of Shaanxi province : XI’AN
Xi’an, the capital of the Shaanxi province of China, is one of the oldest cities in the country, with history going back over 3,000 years. Today, in contemporary China, Xi-an is figuring at the forefront of the country’s participation in the modern world. China’s second aerospace center is being built in Xi’an, for example, and the city is also home to the world’s largest Internet Cafe/Bar, a facility with over 3,000 computers.

26. Lingerie shop specification : C-CUP
The word “brassière” is of course French in origin, but it isn’t the French word for a “bra”. In France a bra is a “soutien-gorge”, translating to “held under the neck”. The word ‘brassière” in French is used for a baby’s undershirt, a lifebelt or a harness. “Brassière” comes from the Old French word for an “arm protector” in a military uniform (“bras” is the French for “arm”). Later “brassière” came to mean “breast plate” and from there was used for a type of woman’s corset. The word jumped into English around 1900.

27. Ancient empire builders : INCAS
The Inca people emerged as a tribe around the 12th century, in what is today southern Peru. The Incas developed a vast empire over the next 300 years, extending along most of the western side of South America. The Empire of course fell to the Spanish, finally dissolving in 1572 with the execution of Tupac Amaru, the last Incan Emperor.

31. Company at the forefront of the dot-com boom : NETSCAPE
Netscape’s flagship product was its browser, which eventually came to be known as Netscape Navigator. Navigator had a huge impact on computing, basically bringing the Net to the masses by offering an intuitive, user-friendly interface. So popular was the product, that when the company had its IPO, the initial stock price set at $14 a share had to be doubled to $28 at the last minute. At the end of the first day’s trading, the stock closed at $75, and there were a lot of very rich people as a result (at least on paper!).

34. Like brutal tactics : GESTAPO
Gestapo is a contraction for “Geheime Staatspolizei”, or “Secret State Police”. The Gestapo was formed in 1934, not long after Adolf Hitler took power as Chancellor of Germany in 1933.

41. Poisonous mushroom producer, briefly? : H-TEST
The first test of a hydrogen bomb was in 1954 at Bikini Atoll in the Marshall Islands. It may have been a technical success, but it was an environmental disaster, largely because the actual yield of 15 megatons was unexpected (4-6 megatons was anticipated). The fallout caused many deaths, and led to birth defects for generations.

44. Club cousin : BLT
The BLT (bacon, lettuce and tomato) is the second most popular sandwich in the US, after the plain ham sandwich.

45. Star in the Swan constellation : DENEB
Deneb is the brightest star in the constellation Cygnus, the Swan. The name “Deneb” comes from the Arabic word “dhaneb” meaning tail, as it lies at “the tail” of the swan.

46. Shield border : ORLE
In heraldry, an orle is a decorative band that lies close to the edge of the front surface of a shield. With such a design, the orle is also the shape of a shield by necessity.

51. Locale for an Olivier Award winner : THEATRE
Laurence Olivier has to be one of the most respected actors to come out of England in the 20th century. He had tremendous impact on stage and screen, and was never short of work on either side of the Atlantic. While working in the British film industry just before WWII, Olivier met actress Vivien Leigh. The two were already married but started an affair. Olivier travelled to Hollywood as he was cast as Heathcliff in “Wuthering Heights”, his big break in Hollywood. Leigh followed him, and found herself cast as Scarlett O’Hara in “Gone with the Wind”. The couple took Hollywood by storm, and eventually unraveled their prior marriages so that they could wed, in 1940.

53. One may suffer a blow : EGO
“Ego” is another word for “the self”, and is used to distinguish oneself from others and the world around one. In psychoanalysis, the ego is that division of the psyche that is most in touch with external reality, the part that is conscious. “Ego” is a Latin word meaning “I”.

54. 1980 Maxwell Smart film, with “The” : NUDE BOMB
The 1980 movie “The Nude Bomb” was indeed a bomb, doing very poorly at the box office. The storyline involved a call back to service for Maxwell Smart, played by Don Adams. He has to stop a plot to explode a bomb that destroys only clothing (lots of opportunity for titillation!).

61. Copied a capo : RASPED
More properly called a caporegime, a capo is high-ranking member of the Mafia (cosa nostra).

Down
4. Andean tuber : OCA
The plant call an oca is also known as the New Zealand Yam. The tubers of the oca are used as a root vegetable.

5. Strike : DELE
Dele is the editorial instruction to delete something from a document, and is often written in red.

8. Mingo player of 1960s TV : ED AMES
Mingo was a Native American character in the TV show “Daniel Boone”, played by Ed Ames (opposite Fess Parker). Ames was also a popular singer in the fifties, part of “The Ames Brothers”.

9. Sawyer’s successor in Chicago : DALEY
Richard J. Daley was the Mayor of Chicago for 21 years (1955-1976), making him the longest-serving mayor for the city in history. His son, Richard M. Daley is the current Mayor of Chicago, the second-longest serving mayor.

10. Longtime enemy of Wonder Woman : ARES
Wonder Woman first appeared in print in 1941, published by DC Comics. As she was created during WWII, Wonder Woman’s first foes were the axis powers. In the less realistic world her biggest foe was, and still is, Ares, named for the Greek mythological figure.

11. Discipline symbolized by a painted circle : ZEN
Zen is one of the Buddhist schools, that became it’s own tradition in China back in the 7th century AD. Zen is a Japanese spelling of the Chinese word “chan”, which in turn derives from the Sanskrit word “dhyana” meaning “meditation”.

The Zen symbol of a painted circle is known as “enso”, the Japanese word for “circle”.

12. Style associated with washboards :
Zydeco is a style of folk music that evolved from Creole music in Louisiana. The name “Zydeco” is imitative of the French word for green beans, “les haricots”. A popular dance tune was “les haricots sont pas sales”.

21. Lighter option : ZIPPO
The first Zippo lighter was made in 1933, in Bradford, Pennsylvania. The name “Zippo” was simply a word made up by the company founder, George Blaisdell, as he liked the word “zipper”. You can buy one today for $12.95, or $8,675.95 if you want the solid gold model.

24. The court’s Bucharest Buffoon : NASTASE
I thought that Ilie Nastase was the most entertaining tennis player of the 70s, the days of Jimmy Connors, Bjorn Borg and John McEnroe. No matter how much pressure there was in a match, he always had time to give the crowd a laugh.

26. Latte alternative : CHAI TEA
Chai is a drink made from spiced black tea, honey and milk. “Chai” is the Hindi word for “tea”. We often called tea “a cup of char” growing up, with “char” being the slang word for tea derived from “chai”.

33. Plasma bit : ION
A plasma lamp is a light source that generates light by exciting a plasma inside a a glass container, using radio waves to create the plasma of ionized particles. One of the original gases used for such plasmas was argon.

36. Quaint humiliator : DUNCE CAP
John Duns Scotus was a theologian and scholar in the Middle Ages, responsible for many writings that were used as textbooks in British universities of the day. New ideas developed during the English Renaissance, but Duns Scotus and his followers resisted the changes. The word “dunse” came into use as a way of ridiculing those refusing to learn anything new, a precursor to our modern usage of “dunce”.

38. Responded to a crash, maybe : REBOOTED
The verb “to boot” as used in the world of computers comes from the phrase “pull oneself up by one’s bootstraps”. The idea is that the software that has to be loaded before a computer can do anything useful is called a “bootstrap load”.

41. Hang (with) : HOBNOB
The term “hobnob” dates back to the mid 1700s, and is derived from “hob and nob”, a phrase meaning to toast each other in turn, or to buy alternate rounds of drinks.

43. Uses shortening on? : ELIDES
To elide is to pass over, or omit or slur, a syllable when speaking.

44. State surrounded by Lower Saxony : BREMEN
Germany is divided into 16 states, the smallest of which is Bremen. The state of Bremen is actually made up of two cities, Bremen and Bremerhaven, and is completely surrounded by the much larger state of Lower Saxony.

51. Alternative to a carpet lift : T-BAR
A T-bar is a type of ski lift in which the skiers are pulled up the hill in pairs, with each pair sitting on either side of T-shaped, metal bar.

A carpet lift, also called a magic carpet, is the simplest of ski lifts, often available on bunny hills for young, novice skiers. The lift is basically a conveyor belt, with the machinery underground and the carpet running continuously along the surface of the snow.

52. Part of the Tuscan Archipelago : ELBA
I had a lovely two-week vacation in Tuscany once, including what was supposed to be a two-night stay on Elba. I had envisioned Elba as a place full of history, and maybe it is, but it is overrun with tourists who use it as a beach getaway. We left after one day, and we won’t be going back.

55. Apnea diagnoser, briefly : ENT
Sleep apnea can be caused by an obstruction in the airways, possible due to obesity or enlarged tonsils.

An Ear, Nose and Throat specialist is an ENT.

57. They, in Calais : ILS
“Ils” is the French word for they, when referring to masculine nouns. “Elles” is the word used for feminine nouns.