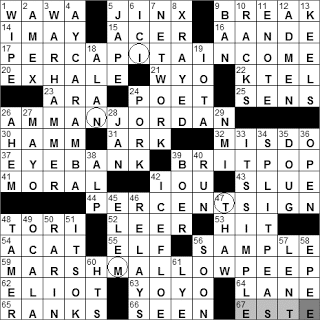 THEME: BREAK RANKS … each of the circled letters sits in the middle of (breaking) a military rank:

5. Hurl curse words at? : JINX
A jinx is a charm or a spell, and the word “jinx” comes from an older word “jyng” from the 17th century. A “jyng” was another word for the “wryneck”, a type of bird much used in witchcraft.

9. With 65-Across, go against the group … or what the shaded squares literally do in the answers to the starred clues : BREAK
(65. See 9-Across : RANKS)

15. Big name in PCs : ACER
I am typing away right now in an Acer laptop, for my money the most reliable machine at the best price. Acer is a Taiwanese company that I used to visit a lot when I was in the electronics business. I was very impressed with the company’s dedication to quality, and haven’t been let down since.

16. Sister of the Biography Channel : A AND E
The A&E television network used to be a favorite of mine, with the “A&E” standing for “arts and entertainment”. The channel used to air a lot of the old classic dramas, as well as biographies and arts programs. Now there seems to be more reality TV, with one of the flagship programs being “Dog the Bounty Hunter”. A slight change of direction I’d say …

17. *Average national earnings : PER CAPITA INCOME
The circled “I” breaks the rank of CAP-TAIN in the answer …

21. Mont. neighbor : WYO
Wyoming is the least populous state, and the tenth largest state in terms of area.

26. *Capital ENE of Jerusalem : AMMAN, JORDAN
The circled “N” breaks the rank of MA-JOR in the answer …

Amman, the capital city of Jordan, is one of the oldest continuously-inhabited cities in the world. Amman has been occupied by a number of different civilizations over the centuries, including the Greeks who called it Philadelphia, a name retained by the Romans when they occupied the city just after 100 AD.

30. Olympic gymnast Paul or Morgan : HAMM
The twin brothers Paul and Morgan Hamm competed in the 2004 Olympic Games in Athens, representing the United States. Paul and Morgan won the silver medal in the team event, and Paul won the gold in the all-around competition.

Oasis were an English rock band from Manchester in the north of the country. The group was phenomenally successful in the UK, holding the record for the longest run in the UK Top Ten with 22 successive Top Ten hits.

On an American keyboard, the percent sign is found over the number 5.

An ensign is the most junior rank of commissioned officer (usually) in the armed forces. The name comes from the tradition that the junior officer would be given the task of carrying the ensign flag.

48. Danish kroner, topologically speaking : TORI
“Krone” translates in English as “crown”, and was the name given to coins that bore the image of the monarch. Today, the krone is the name given to the currency of Norway and of Denmark. Some of the Norwegian and Danish kroner have holes in the middle, giving them a “doughnut” or “torus” shape.

55. Pole position holder? : ELF
One of Santa’s elves might be said to “hold a position” making toys at the North Pole …

56. Use a portion of, as one song in another : SAMPLE
In the world of recorded music, the action of taking a portion of one song and using it in another song is called “sampling”. Sampling can be very inventive and creative, and is very popular in hip hop music … so I am told …

59. *Easter basket treat : MARSHMALLOW PEEP
The circled “M” breaks the rank of MARSH-AL in the answer …

Peeps are marshmallow candies usually in the shapes of chicks and bunnies, primarily sold around the Easter holiday. Peeps were introduced in 1952 by a Russian immigrant called Sam Born whose company “Just Born” makes the candies to this day. The original candies were yellow and hand-shaped to look like little chicks, hence the name “Peeps”.

62. Ex-governor Spitzer : ELIOT
Eliot Spitzer was the Governor of New York for just over a year before he resigned when it surfaced that he had been a client of a prostitution ring.

67. Ciudad del ___ (second-largest city in Paraguay) : ESTE
Ciudad del Este is the second largest city in Paraguay (after the capital, Asunción). As the name suggests (“City of the East” in Spanish), Ciudad del Este is on the Eastern border of the country. It is connected to the city of Foz do Iguaçu in Brazil by what is called the Friendship Bridge over the Paraná River. The bridge is extremely busy, as the majority of Paraguay’s imports and exports pass over it.

Down
2. Green card, in brief : AMEX
Amex is short for American Express. There are more transactions conducted in the US (in dollar terms) using the Amex card than any other.

3. Medieval close-combat weapon : WAR HAMMER
War hammers were medieval weapons developed in response to the effectiveness of body armor. It was relatively difficult to cause bodily harm with a sword when an opponent was wearing armor, but the weighty war hammer could deliver its full force without having to penetrate the defensive metal plate.

4. Bart Simpson catchphrase : AY, CARAMBA!
Bart Simpson apparently uses the expression “Ay, caramba!” when he is positively surprised about something, often something related to a female I am told …

5. Mock : JAPE
To jape is to joke or quip. The exact origins of “jape” are unclear, but it does seem to come from Old French. In the mid-1600’s “to jape” was a slang term meaning “to have sex with”. No joke!

8. Saw right through? : X-RAYED
X-rays were first really studied by the German physicist Wilhelm Röntgen, and it was he who gave the name “X-rays” to this particular type of radiation. Paradoxically, in Röntgen’s native language of German, X-rays are routinely referred to as “Röntgen rays”. Röntgen won the first ever Nobel Prize in Physics for his work on X-rays, in 1901.

11. Short online message : E-NOTE
Don’t forget to put your e-note in an e-envelope and put an e-stamp on it …

12. Pro pitchers : AD MEN
If you haven’t seen the AMC show “Mad Men” then I urge you to go buy the first season on DVD

and allow yourself to get addicted. It is a great series set in the sixties, telling all that goes on in and around the advertising business on Madison Avenue in New York City. It brings you right back to the days of three-martini lunches, office affairs, and chain-smoking cigarettes. Great stuff …

19. Bit : IOTA
Iota is the ninth letter in the Greek alphabet. We use it to portray something very small, as it is the smallest letter in the alphabet.

24. Bill bloater : PORK
Pork barrel politics have been around for a long time. The term originated in 1863 in a story by Edward Everett Hale called “The Children of the Public”. Hale used “pork barrel” in a positive way, describing any public spending by government for the benefit of citizens. By the 1870s the term “pork” had negative connotations, with references in the press to “pork barrel bills” in Congress. Nowadays “pork” really applies to any government project designed to benefit a relatively small group of citizens (usually potential voters for a particular politician) with the bill being paid by the citizenry as a whole.

35. QB Flutie : DOUG
Doug Flutie is a former NFL football player, but is most famous as a Boston College quarterback and Heisman Trophy winner. Outside of sports Doug plays drums in the Flutie Brothers Band, along with his brother Darren (a famed wide receiver) on guitar.

39. Orange Free State settler : BOER
Boer is the Dutch and Afrikaans word for “farmer”, a word that was used to describe the Dutch-speaking people who settled parts of South Africa during the 1700s. Many of the settlers left the Cape and founded the Orange Free State, an independent republic located between the Orange and Vaal rivers. The Boers made this move largely to get out from under British rule.

42. Penguin’s locale : ICE FLOE
An ice floe is a sheet of ice that has separated from an ice field, and is floating freely on the ocean.

45. Ca, Co or Cu : ELEM
Calcium, cobalt and copper are all elements.

57. Time to give up? : LENT
In Latin, the Christian season that we now call Lent was termed “quadragesima”, a reference to the forty days that Jesus spent in the desert before beginning his public ministry. When the church began its move in the Middle Ages towards using the vernacular, the term “Lent” was introduced. “Lent” comes from “Lenz”, the German word for “spring”.

58. Thin blade : EPEE
The French word for sword is épée.

61. Caustic soda : LYE
Historically, lye was hydrated potash (potassium hydroxide), but nowadays when we purchase lye it is caustic soda (sodium hydroxide). The brand name drain cleaner Crystal Drano is sodium hydroxide (lye) mixed with sodium nitrate, sodium chloride (table salt) and aluminum. The product clears pipes as the lye reacts with any fats in the clog forming soap. The lye also reacts in water with the finely divided aluminum generating tremendous heat, creating boiling and churning so that any hair or other deposits are cut by the sharp edges of the crystals. Having said all that, boiling water poured down the drain is nearly as effective I find …