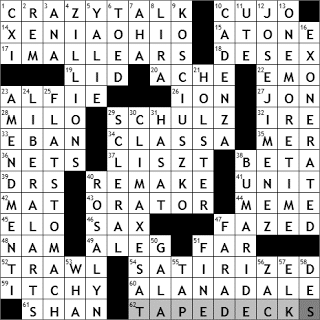 Today’s Wiki-est, Amazonian Googlies
Across
1. Balderdash : CRAZY TALK
“Balderdash” is a senseless jumble of words, and was originally (back before the late 1600s) a jumbled mix of liquids (like maybe beer and wine, or even beer and milk!).

10. 1981 best seller set in Castle Rock, Me. : CUJO
“Cujo” is a Stephen King horror novel, which means that I have never read it. The character Cujo is a rabid St. Bernard dog which for much of the novel besieges a young couple for three days in their stalled car. King tells us that he lifted the dog’s name from real life, as Cujo was the nickname of Willie Wolfe, one of the men responsible for the 1974 kidnapping of Patty Hearst by the Symbionese Liberation Army.

19. Operculum : LID
In a fish, the operculum is the name given to the bony flap that covers the gills.

The musical genre of “emo” originated in Washington D.C. in the 80s, and takes its name from “emotional hardcore”. Not my cup of tea …

3. It lost to “Born Free” for Best Song of 1966 : ALFIE
There have been two versions of the movie “Alfie”. The original, and for my money the best, was made in 1966 with Michael Caine. The remake came out in 2004 and stars Jude Law in the title role. The theme song was performed by Cher in the 1966 movie, but it was Dionne Warwick’s cover version from 1967 that was the most successful in the charts.

28. Minderbinder of “Catch-22” : MILO
Milo Minderbinder is the mess officer in Joseph Heller’s 1961 novel “Catch-22”. In the 1970 film adaptation of the book, the Minderbinder character is played by Jon Voight.

29. Woodstock artist : SCHULZ
Woodstock is Snoopy’s best friend in the Charles Schultz comic strip “Peanuts”. Woodstock is a little yellow bird, and takes his name from the Woodstock rock festival. The naming is a reference to the festival’s iconic publicity poster that features a dove of peace sitting on the neck of a guitar.

33. Israel’s foreign minister during the Six-Day War : EBAN
Abba Eban was an Israeli diplomat and politician, born Aubrey Solomon Meir Eban in Cape Town. While working at the United Nations after WWII he changed his name to “Abba”, the Hebrew word for “father”, reportedly as he could see himself as the father of the nation of Israel.

37. “Hamlet” composer : LISZT
Franz Liszt was the original creator of the single-movement work known as a symphonic or tone poem. A symphonic poem is a musical piece usually based on another work, perhaps a play, story or poem. Liszt wrote the tone poem “Hamlet” in 1858, intended to be an introduction to Shakespeare’s play. I must admit, it’s not a piece that I’ve ever heard …

38. What bugs are often found in : BETA
In the world of software development, the first tested issue of a new program is usually called the “alpha” version. It is expected to have a lot of bugs that need to be fixed, so the alpha release is usually distributed to a small number of testers. After the reported bugs have been eliminated, the refined version is called a “beta” and is released to a wider audience, but with the program clearly labeled as “beta”. The users generally check functionality and report further bugs that are encountered. The beta version feeds into a release candidate, the version that is tested just prior to the software being sold into the market, bug-free … yeah, right …

41. Transfusion amount : UNIT
Traditionally a unit of blood is about a pint, or more likely a half-liter these days.

44. Internet ___ : MEME
A “meme” (short for “mineme”) is a cultural practice or idea that is passed on verbally or by repetition from one person to another. The term lends itself very well to the online world, where links, emails, files etc. are so easily propagated.

45. “Rockaria!” grp. : ELO
ELO of course stands for the Electric Light Orchestra, a symphonic rock group from the north of England. Their manager was Don Arden, father of Sharon Osbourne (wife of Ozzy).

If you listen to ELO’s “Rockaria” off the 1976 album “A New World Record”, you’ll hear an “oops”. The introduction to the track features an opera singer who starts the vocals too early in the first take. The band decided to use that first take anyway, complete with the singer saying “oops”.

46. Jazz piece? : SAX
The saxophone was invented by Belgian, Adolphe Sax. Strangely, he developed lip cancer at one point in his life, but recovered. I had the privilege of visiting his grave in the Cemetery of Montmartre in Paris a few years ago.

48. Site of some ’60s tours : ‘NAM
The term “tour of duty” describes the length of time that a military professional spends in a war zone. For most of the Vietnam War the Army tour of duty was 12 months, whereas the Marine Corps tour of duty was 6 months, although most Marines accepted an incentive to serve 13 months. Back then individuals were rotated in and out of the war zone, but these days the military tries to keep units together, rotating soldiers as a group.

49. “Get ___ Up” (John Mellencamp hit) : A LEG
John Mellencamp started to use the stage name Johny Cougar in 1976, a name that evolved into John Cougar, and then to John Cougar Mellencamp in the eighties. In 1992 the “Cougar” was dropped altogether and Mellencamp has been performing under his own name since then. Mellencamp was married to former supermodel Elaine Irwin for eighteen years, but the two recently decided to split. Mellencamp’s new girlfriend is actress Meg Ryan.

52. With 36-Across, school gathering equipment : TRAWL

54. Swiftly written? : SATIRIZED
Jonathan Swift was an Irish author and cleric. He is most famous perhaps for his 1726 novel “Gulliver’s Travels”, but we Irishmen remember him also as the Dean of St. Patrick’s Cathedral in Dublin. He was renowned for his wit and satire.

60. 1902 Kentucky Derby winner that was named after a fictional character : ALAN-A-DALE
Alan-a-Dale was the racehorse that won the 1902 Kentucky Derby. The horse went lame going down the final stretch, but he was able to finish the race in first place as he had a six-length lead before sustaining the injury. Alan-a-Dale is a fictional outlaw associated with the legend of Robin Hood.

62. RadioShack stock : TAPE DECKS
The store we know today as RadioShack was founded as “Radio Shack” in 1921 and focused on serving the amateur radio market. The name was chosen as a “radio shack” was the wooden structure that housed the radio equipment on a ship, and a ham radio station was also known as a “radio shack”. Radio Shack was losing money in the sixties and was bought for a song by Charles Tandy who merged it with his leather goods stores under the name Tandy Radio Shack & Leather (can you believe it?). Tandy dropped all lines bar electronic items and changed the name “back” to the trendy “RadioShack” in 2000.

Down
2. Post-retirement occurrence : REM
REM is an acronym standing for Rapid Eye Movement sleep. REM sleep takes up 20-25% of the sleeping hours and is the period associated with one’s most vivid dreams.

3. Suffix with railway : -ANA
An ana (or plural anas) is a collection, including literature, that represent the character of a particular place or a person. Ana can be used as a noun, or as a suffix.

5. Bush or Cheney, once : YALIE
Yale is the private, Ivy League school located in New Haven, Connecticut. Yale was founded in 1701, making it the third-oldest, higher education establishment in the country (after Harvard, and William and Mary).

8. Pound of Turkey? : LIRA
The name “lira” is used in a number of countries for currency. It comes from the Latin word for a pound, and is derived from a British pound sterling, the value of a Troy pound of silver. The Turkish lira has been around since the mid 1870s.

9. Highest mountain in Australia : KOSCIUSZKO
Mount Kosciuszko is the highest peak in Australia, standing at 7,310 feet. It was named by a Polish explorer in 1840, in honor of the Polish-Lithuanian national hero, General Tadeusz Kościuszko. Over the years, measurements of nearby peaks showed that the peak originally labelled Kosciuszko was not in fact the tallest in the area, so the name was transfered to the highest peak so that “Kosciuszko” still retained the honors.

10. Virtuosic improvisation : CADENZA
In music a cadenza (the Italian word for “cadence”) is a passage devoted to a solo player or singer and usually has a “free” style so that the featured artist has the opportunity to improvise.

11. Explorer or Navigator, briefly : UTE
A utility vehicle is often called a “ute” for short. Nowadays one mainly hears about sports utes and crossover utes.

12. He pitched a no-hitter in 1999 : JOSE JIMENEZ
José Jiménez is a former Major League Baseball pitcher. While playing for the St. Louis Cardinals in 1999 he pitched a no-hitter against the Arizona Diamondbacks, a remarkable achievement given that Jiménez was a rookie that season.

23. Its first word is “Congress” : AMENDMENT I
The Constitution of the United States was adopted on September 17, 1787. There have been 27 amendments to the constitution, the first ten of which are collectively called the Bill of Rights. In essence the Bill of Rights limits the power of the Federal Government, and protects the rights of individuals. The First Amendment states:

29. ___ buckle (eye surgery procedure) : SCLERAL
A scleral buckle is a procedure carried out to facilitate healing in the case of a retinal detachment. The “buckle” moves the wall of the eye closer to the detached retina so that reattachment occurs more readily.

38. Hitch : BUM A RIDE
The term “hitchhike” comes from the notion of attaching a sled to a moving a vehicle to get a “ride”, and dates back to the late 1800s.

47. Measure associated with Leyden jars : FARAD
A Leyden jar is a cool device that stores static electricity, something we may remember from high school science class. The jar is in effect a capacitor (a farad is a unit of capacitance), storing the charge between foil coatings on the inside and outside of the glass jar. One of the inventors was Dutch scientist Pieter van Musschenbroek of Leyden, a city that is home to the oldest university in the Netherlands, and a city that gave its name to the invention.

57. Buckskin source : ELK
Buckskin is the skin of a male deer, moose or elk.

58. “Porte ___ Lilas” (Oscar-nominated 1957 film) : DES
“Porte des Lilas” is a 1957 French-Italian drama. The title translates literally as “Gate of Lilacs”. Porte des Lilas is a station on the Paris Métro, named after a gate in the 19th century Thiers Wall of Paris which led to the town of Les Lilas.