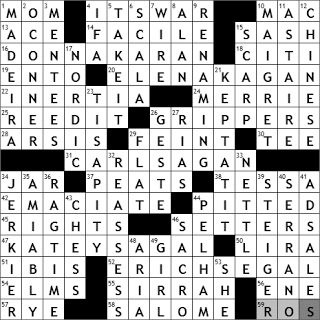 1. “Mr. ___” (1983 film) : MOM
“Mr. Mom” is a 1983 comedy written by John Hughes, starring Michael Keaton and the great Teri Garr. It’s all about an engineer in the auto industry in Detroit who loses his job, and then takes over the running of the household while his wife heads back to work. Funny stuff …

15. Glazier’s frame : SASH
A movable (up and down) window frame is called a sash, from the French word for a frame, “châssis”.

16. Big name in women’s fashion : DONNA KARAN
Donna Karan is an American fashion designer, creator of the DKNY clothing label. She was raised in the fashion industry as her mother was a model, and her stepfather a tailor.

18. New York’s ___ Field : CITI
Citi Field is the new baseball stadium used by the New York Mets. It sits right next door to Shea stadium, where the Mets had played for decades. And the name of course comes from sponsor Citigroup.

24. ___ Melodies : MERRIE
Merrie Melodies was a series of cartoons distributed by Warner Brothers, first introduced in 1931, and last produced in 1969.

28. Accented part of a poetic foot : ARSIS
In a poetic foot or musical measure the part that is stressed is the “arsis”, and the weaker part is the “thesis”.

31. Host of an Emmy-winning PBS series : CARL SAGAN
Carl Sagan was a brilliant astrophysicist, and a great communicator. He was famous for presenting obscure concepts about the cosmos in such a way that we mere mortals could appreciate. He also wrote the novel “Contact” which was adapted into a fascinating 1997 film of the same name starring Jodie Foster.

37. Fuel sources : PEATS
When dead plant matter accumulates in marshy areas, it may not fully decay due to a lack of oxygen or acidic conditions. We are familiar with this in Ireland, because what can form then is peat, and we have lots and lots of peat bogs.

45. Subjects of the first 10 Amendments : RIGHTS
The Constitution of the United States was adopted on September 17, 1787. There have been 27 amendments to the constitution, the first ten of which are collectively called the Bill of Rights. In essence the Bill of Rights limits the power of the Federal Government, and protects the rights of individuals. For example, the First Amendment states:

46. Volleyball players, at times : SETTERS
In volleyball, there are passers, blockers and setters.

47. Star of TV’s “8 Simple Rules” : KATEY SAGAL
Katey Sagal played Peggy Bundy on “Married … with Children”. Later she took over as star of the show “8 Simple Rules” in the middle of its run, when John Ritter passed away unexpectedly in 2003.

50. Turkish coin : LIRA
The name “lira” is used in a number of countries for currency. It comes from the Latin word for a pound, and is derived from a British pound sterling, the value of a Troy pound of silver. The Turkish lira has been around since the mid 1870s.

51. Sacred symbol of ancient Egypt : IBIS
The ibis a wading bird, revered in ancient Egypt. “Ibis” is an interesting word grammatically speaking. You can have one ibis, two ibises and a flock of ibis. And if you want to go with the classical plural, you can have two ibides!

54. Part of the New Haven landscape : ELMS
The city of New Haven, Connecticut had the first public tree-planting program in the country. That first planting included a whole bunch of elms, earning New Haven the nickname “The Elm City”.

55. Shakespearean term of address : SIRRAH
“Sirrah” is an alteration of the term “sir”, and is an obsolete form of address. It is used to express contempt.

57. New York city where Ogden Nash was born : RYE
Ogden Nash the poet was well known for his light and humorous verse. Try this one:

59. Children’s writer Asquith : ROS
Ros Asquith writes the “Teenage Worrier” books aimed at teens, as well as cartoons for “The Guardian” newspaper in the UK.

Down
1. European wine : MADEIRA
Madeira is an Portuguese-owned archipelago that lies to the southwest of mainland Portugal. Madeira is famous for its wine, which is a fortified beverage (as is port, sherry and Marsala wine).

2. Patricia who wrote “Woe Is I” : O’CONNER
Patricia O’Connor has written five books about the English language, including “Woe Is I: The Grammarphobe’s Guide to Better English in Plain English”. What a great subject for book! I need to buy it for my kids (and probably should take a peek myself) …

3. Students with personal guides : MENTEES
A mentor is a wise counselor, and the person receiving the advice is the mentee. In Greek mythology Mentor was a friend to Odysseus, the hero of Homer’s “Odyssey”.

6. Teatro alla ___ : SCALA
The La Scala Opera House opened in 1778, built on the site of the church of Santa Maria della Scala, which gave the theater its name.

10. Georges Simenon detective Jules : MAIGRET
Georges Simenon wrote a whole boatload of (75) detective novels featuring Commissaire Jules Maigret. They are very approachable stories, and easy reading for us schoolkids when we had to read novels for French class.

11. He said “I just put my feet in the air and move them around” : ASTAIRE
As you may well know, Fred Astaire’s real name is Frederick Austerlitz. Fred was from Omaha, Nebraska, and before he made it big in movies, he was one half of a celebrated music hall act with his sister, Adele. The pair were particularly successful in the UK. Adele married into nobility in England, taking the name Lady Charles Cavendish.

15. Line of cliffs : SCARP
A scarp is a steep slope or a line of cliffs, especially one created by erosion. An alternative name is an escarpment.

17. Like most Icelanders : NORDIC
Someone is described as Nordic if they are a native of Norway, Denmark, Sweden, Finland or … Iceland.

26. Brave deed of yore : GESTE
Our word “gest” meaning a great deed or an exploit has been around since about 1300, and comes from the Old French word “geste” meaning the same thing. these days “geste” also means “gesture”, which makes sense …

33. Sting source : NETTLE
Most nettle species have stinging hairs that secrete formic acid. This formic acid is the same chemical that is found in the venom injected with a bee or ant sting. The Latin word for ant is “formica”, giving its name to the acid.

36. “The Entertainer” musical genre : RAGTIME
Ragtime music was at the height of it popularity in the early 1900s. The genre takes its name from its characteristic “ragged” rhythms. The most famous ragtime composer was Scott Joplin, who had a big hit with his “Maple Leaf Rag” when it was published in 1899. Ragtime fell out of favor around 1917 when the public turned to jazz, and then had a resurgence in the forties when jazz musicians started to include ragtime tunes in their repertoires. But it was the 1973 movie “The Sting” that brought the true revival, as the hit soundtrack included numerous ragtime tunes by Scott Joplin, including the celebrated melody “The Entertainer”, originally published in 1902.

39. Oscar-winning actor who played Napoleon, Mussolini and W. C. Fields : STEIGER
Rod Steiger played some powerful roles on the screen, perhaps most memorably the Chief of Police in the 1967 drama “In the Heat of the Night”, for which he won a Best Actor Oscar. Steiger was married five times, including a 10-year marriage to fellow actor Claire Bloom. Together Bloom and Steiger had a daughter, the British opera singer Anna Steiger.

40. Red hot chili pepper : SERRANO
The serrano pepper looks like a jalapeño, but it is a little hotter. The serrano is native to the mountainous regions of Puebla and Hidalgo and Mexico, and takes its name from “sierra”, the Spanish word for “mountain”.

43. Benjamin Franklin’s “The Morals of ___” : CHESS
Benjamin Franklin was an enthusiastic and able chess player, and was the first American lauded as a chess player in the New World. He wrote an essay called “The Morals of Chess” published in 1786, making it the second-oldest American publication on the subject. It took him a while to get into the US Chess Hall of Fame though, being inducted in 1999, over 200 years after his death.

46. Prefix with iliac : SACRO-
The sacrum and the two ilia are three bones in the human pelvis.