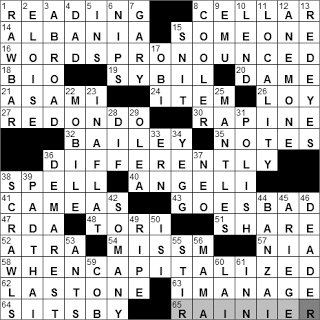 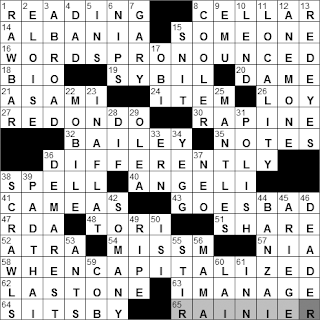 1. *Poet’s performance : READING
There are a few locations with the name Reading, but my guess is that the most famous is Reading, the county town of Berkshire in England. Reading is a major railroad junction, and the site of a renowned monastery and a prison. Reading Prison was where American actor Stacy Keach spent 6 months in 1984, convicted of smuggling cocaine into the UK.

14. Country with which the U.S. goes to war in “Wag the Dog” : ALBANIA
The 1997 movie “Wag the Dog” is a black comedy starring Dustin Hoffman and Robert De Niro. It tells the story of a fake war that is manufactured by a Washington spin doctor in order to distract the American electorate. It is based on the novel “American Hero” by Larry Beinhart. In the movie the war is fictitious and the president goes unnamed. In the novel, Beinhart uses Desert Storm as the war in his storyline, and George H. W. Bush as the President.

15. Who “saved my life tonight” in a 1975 Elton John hit : SOMEONE
“Someone Saved My Life Tonight” is a 1975 song by Elton John. The song is autobiographical and tells of a time when John was contemplating marriage in the late sixties to his girlfriend Linda Woodrow. The doubts about marriage led John to consider suicide, but he confided in his friend, fellow singer Long John Baldry, and Baldry convinced John to abandon his marriage plans to focus on his musical career. So Baldry was the “someone” who saved John’s life that night.

18. Jacket material, for short? : BIO
You can usually read an author’s bio on a book’s dust jacket.

19. 1973 nonfiction best seller about a woman with multiple personalities : SYBIL
“Sybil” is a 1973 book by journalist Flora Rheta Schreiber about a woman who suffers from dissociative identity disorder. Sybil (a pseudonym to protect the identity of the patient) at various times manifests sixteen different, very specific personalities, each with very specific characteristics. The book was made into a well-received television mini-series in 1976, starring Sally Field in the title role.

26. “The Thin Man” actress : LOY
High on my list of favorite movies of all time is “The Thin Man” series starring William Powell and the beautiful Myrna Loy. Also on that list are the films in which Loy stars opposite Cary Grant, namely “Mr. Blandings Builds His Dream House” and the wonderful “The Bachelor and the Bobby-Soxer”.

27. ___ Beach, Calif. : REDONDO
Redondo Beach is one of the three so-called Beach Cities in L.A. County, California (along with Manhattan Beach and Hermosa Beach). Among Redondo Beach’s famous residents were the Smothers Brothers who grew up there and graduated from the local high school.

32. Big name in circuses : BAILEY
James Anthony Bailey collaborated with P. T. Barnum to establish Barnum and Bailey’s Circus. It was Bailey who negotiated the deal to buy a famous elephant from London Zoo in 1882, the one called “Jumbo”. It was the exposure that Jumbo got in the circus that brought into common usage our term “jumbo” meaning “huge”.

48. Doughnuts, but not danishes : TORI
A torus is a doughnut shape.

52. Gillette offering : ATRA
Fortunately for crossword setters, the Atra razor was introduced by Gillette in 1977. It was sold as the Contour in some markets, and its derivative products are still around today.

54. Bette’s “Divine” stage persona : MISS M
One of my favorite singers, and indeed all-round entertainers, is Bette Midler. If you’ve ever seen her live show you’ll know that “camp” is a good word to describe it, as her humor is definitely “out there” and quite bawdy. Early in her career, Midler spent years singing in the Continental Baths, a gay bathhouse in New York City. There she became very close friends with her piano accompanist, Barry Manilow. While singing in the bathhouse Bette only wore a white towel, just like the members of her audience. It was there she created her famous character “the Divine Miss M”, and earned herself the nickname “Bathhouse Betty”.

57. Actress Vardalos : NIA
Not only was the delightful Nia Vardalos the star of the 2002 hit movie “My Big Fat Greek Wedding”, she also wrote the screenplay. The film never made it to number one at the box office, but it still pulled in more money than any other movie in history not to make it to number one. That record I think reflects that the film wasn’t a blockbuster but rather a so-called “sleeper hit”, a movie that people went to see based on referrals from friends. The big fat mistake came when a spin-off TV show was launched, “My Big Fat Greek Life”. It only ran for 7 episodes.

65. *Like Seattle vis-à-vis Phoenix : RAINIER
Mount Rainier is an active volcano in the state of Washington in the Cascade Mountain Range. Native Americans first called the peak “Tacoma” meaning “mother of waters”. When Captain George Vancouver discovered Puget Sound in 1792, he named the peak in honor of his friend Rear Admiral Peter Rainier. There have been movements to change the name back to Tacoma, but these seem to have petered out (pun intended!).

Down
2. Nancy Drew’s aunt : ELOISE
I loved the Nancy Drew mysteries as a kid (I know, as a boy I “shouldn’t” have been reading them!). They were written by a number of ghost writers after the character was introduced by Edward Stratemeyer in 1930. Nancy’s Aunt Eloise was often the source of the mysteries that were to be solved, as Nancy was often summoned to Eloise’s New York City apartment to help unravel some case or other.

6. Cheese ___ : NIPS
Cheese Nips are small crackers made by Kraft under the Nabisco brand name. Cheese Nips have been around since 1955 and you can even buy them in the shape of Spongebob Squarepants (just in case you’re into that kind of thing).

7. Player of golf : GARY
Gary Player is a professional golfer from South Africa. To me, Player has always come across as a real gentleman, with a great personality. Living in South Africa, and playing mainly in the US, he has logged over 15 million air miles, believed to be a record for an athlete.

8. Clink : COOLER
The Clink (also “the Clynke”) was a celebrated prison in Southwark, England owned by the Bishop of Winchester. The prison was given the name “the clink” probably from the sound made by metal keys in metal locks and metal chains around ankles. The prison was closed down in 1780 and around the same time “clink” entered the English language as a slang term for “jail”.

9. Prey of wild dogs and crocodiles : EMU
The emu has had a tough time in Australia since man settled there. The aborigines used them for food and are very adept at hunting them using a variety of traditional techniques. There was even an “Emu War” in Western Australia in 1932 when migrating emus competed with livestock for water and food. Soldiers were sent in using machine guns in an unsuccessful attempt to drive off the emus. The emus were clever , and broke their usual formation and adopted guerrilla tactics, operating as small units. After 50 days of “war”, the military withdrew. Subsequent requests for military help for the farmers was refused.

12. Flower that shares its name with a tentacled sea creature : ANEMONE
The name “anemone” means “daughter of the wind” in Greek, and at one time it was believed that the wind was what actually caused the flower to bloom.

17. Japanese band : OBI
An obi is a sash worn in some forms of dress in Japan both by men and women, although the styles for women tend to be more ornate.

22. *Not fixed : MOBILE
Mobile, Alabama was the first capital of French Colonial Louisiana, founded in 1702. The city takes its name from the Mobilian tribe of Native Americans that lived in that area.

23. Like Elgar’s Symphony No. 1 : IN A-FLAT
Sir Edward Elgar was the quintessential English composer, inextricably associated with his compositions the “Pomp and Circumstance” marches (which includes “Land of Hope and Glory”) and the “Enigma Variations”.

29. Pharmaceutical oils : OLEA
Oleum (plural: olea) is the Latin word for “oil”. The term oleum is used for a whole host of pharmaceutical oils, extracted from both plant and animal sources.

31. *Shine : POLISH
The country of Poland takes her name from the West Slavic tribe of “the Polans”.

34. Burglar in detective stories : YEGG
Yegg is a slang word for a burglar, and in particular a safe-cracker. The origin of the term appears to be unknown.

39. Noodle dish : PAD THAI
The delicious dish called Pad Thai is a meld of stir-fried rice noodles with tamarind juice, red chili pepper plus a mix of vegetables and possibly tofu, meat or fish. It is usually topped with crushed peanuts, coriander and lime. The name “Pad Thai” translates as “fried Thai style”.

44. Battle cry : BANZAI
During WWII the Japanese infantry when making mass assaults would often yell out “Banzai!”, a shout of encouragement as they ran into enemy fire. These mass assaults became known by the Allied soldiers as “banzai attacks”. The term “banzai” is not limited to times of war, and is used like a toast wishing long life, as “banzai” translates into “ten thousand years”.

53. Drones, maybe : ANTS
Drone bees and ants are fertile males of the species, whose sole role in life seems to be to mate with a queen.

56. ___ Bear : MAMA
The story of “Goldilocks and the Three Bears” was first recorded in 1837 in England, although the narrative was around before it was actually written down. The original fairy tale was rather gruesome, but successive versions became more family oriented. The character that eventually became Goldilocks was an elderly woman in the early days, and the three “nameless” bears became Papa Bear, Mama Bear and Baby Bear.

60. Medieval French love poem : LAI
In the mid-13th century a lay was a short song, a word that evolved from the Old French word “lai” meaning “song, lyric”.