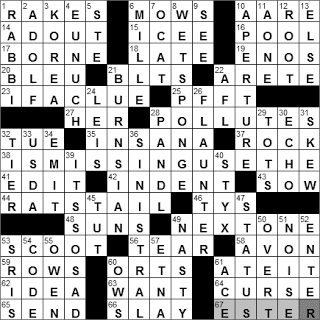 THEME: IF A CLUE IS MISSING, USE THE NEXT ONE … the missing clues are “repeats” of the clue that follows, for example:

10. Longest river entirely in Switzerland : AARE
The Aar (also called the Aare in German) is the longest river entirely in Switzerland. A famous spot along the river is the Reichenbach Falls in the center of the country, actually a series of waterfalls near the city of Meiringen. The falls are celebrated in the world of literature as it was here that Sherlock Holmes fell to his supposed doom with his nemesis Professor Moriarty (in “The Adventure of the Final Problem”).

14. Deuce follower : AD OUT
In tennis, if the score reaches “deuce” (i.e. when both players have scored three points), then the first player to win two points in a row wins the game. The player who wins the point immediately after deuce is said to have the “advantage”. It the player with the advantage wins the next point then that’s two in a row and that player wins the game. If the person with the advantage loses the next point, then advantage is lost and the players return to deuce and try again. If the one of the players is calling out the score then if he/she has the advantage the announcement is “ad in” or more formally “advantage in”. If the score announcer’s opponent has the advantage, then the announcement is “ad out” or “advantage out”. Follow all that …?

15. — (Summer cooler): ICEE
Icee is the brand name of one of those slushy drinks. Ugh …

19. Slaughter who dashed home to win the 1946 World Series : ENOS
Enos Slaughter has a remarkable playing record in Major League Baseball, over a 19-year career. His record is particularly remarkable given that he left baseball for three years to serve in the military during WWII.

20. Kind of cheese : BLEU
Being a bit of a French speaker, the term “bleu” cheese has always kind of irritated me. I would prefer that we use either “blue cheese” or “fromage bleu” and not mix the languages, but then I can be annoyingly picky! It’s said that blue cheese was probably discovered accidentally, as molds tend to develop in the same conditions that are best for storing cheese. The blue mold in the cheese is introduced by adding Penicillium spores before the cheese is allowed to set. And yes, it’s the same mold that is used to produce penicillin, the antibiotic.

21. Food orders sometimes prepared in toaster ovens : BLTS
The BLT (bacon, lettuce and tomato) is the second most popular sandwich in the US, after the plain ham sandwich.

25. Kaput : PFFT
“Pfft” is an interjection used to describe something which has suddenly disappeared, gone “kaput”.

Kaput comes to us from French (via German). “Capot” means “not having won a single trick” in the French card game called Piquet.

27. “Just Say I Love ___” (hit of 1950) : HER
The 1950 hit “Just Say I Love Her” (or sometimes “… love him”) is an English adaptation of an old song from Naples, Italy. It was recorded in English first by Johnny Desmond, and then by others including most famously Vic Damone.

32. There is a “super” one every four yrs. : TUE
Super Tuesday happens in February or March of a presidential election year. It is that Tuesday in which the greatest number of states hold primaries that will select delegates to be dispatched to the national conventions. Super Tuesday has become more significant over the past couple of decades as more and more states hold their primaries early in the cycle in order to increase the importance of the votes from the state.

35. Business TV newsman Ron : INSANA
Ron Insana is a TV commentator, reporter and host in the world of financial news programs. He made a name for himself during the days of the Bush administration as he pulled off two exclusive interviews with President George W. Bush in which they discussed the economy.

46. Baseball’s Cobb and others : TYS
Ty Cobb was one of the richest baseball players of all times. When he retired he was a major stockholder of the Coca-Cola Corporation, and when he passed away in 1961 he had an even bigger investment in General Electric. He left an estate worth about $86m in 2008 dollars.

58. Earl of ___ (Sir Anthony Eden) : AVON
Sir Anthony Eden served as Britain’s Foreign Secretary during WWII, and then as Prime Minister from 1955-57. I think it’s fair to say that he doesn’t have a great reputation as a statesman. He was proud of his stance in favor of peace over war, so his critics characterized him as an appeaser. His major stumble on the world stage occurred with the Suez Crisis in 1956. Egypt’s President Nasser unilaterally nationalized the Suez Canal causing war to be declared on Egypt by Britain, France and Israel. Within a few months political pressure from the US and the USSR caused the allies to withdraw, bolstering Egypt’s national reputation. Eden never recovered from the loss of face at home, and it is felt that the stress even affected his health. Eden resigned in January 1957.

67. Perfume ingredient : ESTER
Esters are very common chemicals. The smaller, low-molecular weight esters are usually pleasant smelling and are often found in perfumes. At the other end of the scale, the higher-molecular weight nitroglycerin is a nitrate ester and is very explosive, and polyester is a huge molecule, a type of plastic.

2. First name in W.W. II infamy : ADOLF
The names Adolf (in Germany) and Adolphe (in France) are dying out, with very few babies being given the name since the days of Nazi Germany.

4. Harem guard, typically : EUNUCH
The word “eunuch” comes from the Greek words “eune” meaning “bed” and “ekhein” meaning “to keep”, so literally a eunuch is a bed-keeper. Indeed, in many early cultures a eunuch was a slave, castrated at an early age to render him “safe”, who was then given lowly domestic tasks such as making the master’s bed, bathing him etc.

5. Marie or Jeanne: Abbr. : STE
“Sainte” is the French word for a female saint, abbreviated to “Ste.”

7. One ___ (baseball variant) : O’CAT
One o’cat, or more properly “one old cat”, is an abbreviated form of baseball with a home plate and just one base.

21. Like the poem “Tam o’ Shanter” : BURNSIAN
A tam o’shanter is a man’s cap worn by Scotsmen. They were originally all blue (and called “blue bonnets”) but as dyes became more available, they became quite colorful. The name tam o’shanter comes from the title character of Robert Burns poem “Tam O’Shanter”.

22. Org. for Joe Namath : AFL
The legendary quarterback Joe Namath played most of professional football games with the New York Jets. Namath played college football with the University of Alabama but left school without finishing his degree, to play professionally. Many years later he enrolled in Alabama’s External Degree program, and graduated with a BA in December 2007, at 64 years of age. Well done, Joe!

28. C.F.O.’s concern : P AND L
The Chief Financial Officer is particularly concerned about profit and loss.

33. “Choice” agcy. : USDA
The US Department of Agriculture dates back to 1862, when it was established by then-president Abraham Lincoln. Notably, Lincoln referred to the USDA as the “people’s department”, reflecting the agrarian basis of our economy back then.

36. Left-handed : SINISTRAL
Someone or something described as “sinistral” is left-handed. Someone right-handed is “dextral”.

40. Frightful river to cross : STYX
The River Styx in Greek mythology was the river that formed the boundary between Earth and the Underworld (also called Hades). The souls of the newly dead had to cross the River Styx in a ferryboat piloted by Charon. Traditionally, a coin would be placed in the mouths of the dead “to pay the ferryman”.

45. King who gained international prominence in 1922 : TUT
King Tut is a name commonly used for the Egyptian pharaoh Tutankhamen. Tutankhamen may not have been the most significant of the pharaohs historically, but he is the most famous today largely because of the discovery of his nearly intact tomb in 1922. Prior to this find, any Egyptian tombs uncovered by archaeologists had been ravaged by grave robbers. Tutankhamen’s magnificent burial mask is one of the most recognizable of all Egyptian artifacts.

53. Eastern holy men’s titles : SRIS
Sri is a title of respect for a male in India.

55. Wilson of “Shanghai Noon” : OWEN
“Shanghai Noon” is a comedy released in 2000, a melding of the movie genres western, kung-fu and comedy. The stars are Owen Wilson and Jackie Chan. The title is of course a pun on the classic western film “High Noon”.

57. Volcano whose eruption was described by Virgil : ETNA
Mt. Etna is the largest of three active volcanoes in Italy, about 2 1/2 times the height of its equally famous sister, Mt Vesuvius. The Roman poet Virgil described an eruption of Mt. Etna in his epic poem the “Aeneid”.

61. Von Richthofen, for one : ACE
Manfred von Richthofen was a famous WWI fighter pilot flying for the Germans, known as the Red Baron. He was credited with more kills than any other pilot fighting on either side of the conflict, recording over 80 combat victories. He didn’t survive the war though, as he was shot down near Amiens in France in 1918.