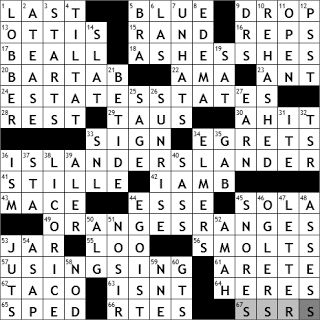 THEME: DROP LETTER … all the theme answers are made up of two words, the second being the first word with the first “letter dropped”

16. 15-Across and allies: Abbr. : REPS
Rand Paul and his father, Ron Paul, are members of the Republican Party.

17. Start of an old Army recruiting line : BE ALL
The current recruiting slogan used by the US Army is “Army Strong”, replacing “Army of One” in 2006. Prior to that “Be All You Can Be” had been the army’s slogan for more than twenty years.

20. Zombies might be on it : BAR TAB
A Zombie is an unusually strong cocktail, with a deceptively mild taste. It was invented in the late thirties by Donn Beach, owner of the Don the Beachcomber restaurant in Hollywood. Apparently Beach created the drink for a friend who consumed three of them right before taking a flight from L.A. to San Francisco. When he returned he complained that the drinks had “turned him into a zombie” for the trip, giving the drink its name. If you dare, one recipe is:

22. Org. for 9-Down : AMA
(9. Members of the 22-Across : DRS)
The American Medical Association was founded in 1847, at the Academy of Natural Sciences in Philadelphia. The first female member was allowed to join in 1868, but the first African American members weren’t admitted until one hundred years later, in 1968.

23. Caste member : ANT
Many creatures organize themselves into a social structure, a phenomenon known as “eusociality”. Examples of such creatures would be ants, bees and wasps, where there are queens, workers and soldiers. The groups within such a hierarchical structure are known as castes. The word “caste” was borrowed from the class divisions in Indian society (although the word and concept was actually introduced by the Portuguese).

29. Sorority letters : TAUS
Tau is the 19th letter of the Greek alphabet, the letter which gave rise to our Roman “T”. Both the the letters tau (T) and chi (X) were symbolically associated with the cross.

34. Long-legged waders : EGRETS
At one time the egret was in danger of extinction as it was hunted for its feathers, which were used as plumes in hats.

41. “___ Nacht” (Christmas carol) : STILLE
The beautiful Christmas Carol “Silent Night” was first performed in Austria in 1818, with words by a priest, Father Joseph Mohr, and melody by an Austrian headmaster, Franz Xaver Gruber. The carol was of course in German and called “Stille Nacht”. The English translation that we use today was provided to us by an American bishop, John Freeman Young from Florida, in 1859.

42. One-quarter of “Whose woods these are I think I know” : IAMB
When I was a school-kid back in Ireland, Robert Frost’s “Stopping by Woods on a Snowy Evening” was our first introduction to American poetry, and what a lovely introduction it was …

An iamb is a metrical foot containing an unstressed syllable followed by a stressed syllable. Robert Frost’s “Stopping by the Woods on a Snowy Evening” consists of lines, each of which is a set of four sequential iambs e.g. “Whose woods / these are / I think / I know”. With a sequence of four iambs, the poem’s structure is described as iambic tetrameter.

43. Club for knights : MACE
A mace is a relatively simple weapon in essence, a heavy weight on the end of a handle that is used to deliver powerful blows on one’s opponent’s body.

45. Alone, on the stage : SOLA
“Sola” is an adjective meaning “alone, by oneself”, and is used as a stage direction to a female character (as opposed to “solo”, the direction for a male).

55. John, to Paul, George or Ringo : LOO
Excellent clue! To the Beatles Paul, George and Ringo, the “john” is “the loo”.

When I was growing up in Ireland, a “bathroom” was a room that had a bath and no toilet. The separate room with the commode was called “the toilet” or sometimes the W.C. (the water closet). Apparently the term closet was used because in the 1800s as toilets moved indoors they often displaced clothes in a “closet”, as a closet was just the right size to take the commode. It has been suggested that the British term “loo” comes from Waterloo (water-closet … water-loo), but no one seems to know for sure.

56. Young salmon : SMOLTS
When young salmon (born in freshwater) are at the smolt stage, they become adapted to saltwater and head for the sea.

61. Rocky ridge : ARETE
An arete is ridge of rock defining the border between two parallel valleys that have been formed by glaciation. If this ridge is rounded, it is called a “col”. However, if it is “sharpened”, with rock falling way with successive freezing and thawing, then it is called an “arete”. Arete is the French word for “fish bone”.

67. Lith. and Lat., once : SSRS
The former Soviet Union was created in 1922, not long after the Russian Revolution of 1917 that overthrew the Tsar. The new Soviet Union was roughly equivalent geographically to the old Russian Empire, and comprised of fifteen Soviet Socialist Republics.

Down
4. Fight with : TILT AT
The verb phrase “tilt at” meaning “fight with” derives from the sport of jousting, or “tilting”, in which contestants fought each other on horseback with lances.

5. Part of a two-piece suit? : BRA
The word “brassière” is of course French in origin, but it isn’t the word the French use for a “bra”. In France what we call a bra is a “soutien-gorge”, translating to “held under the neck”. The word “brassière” is indeed used in France but it applies to a baby’s undershirt, a lifebelt or a harness. “Brassière” comes from the Old French word for an “arm protector” in a military uniform (“bras” is the French for “arm”). Later “brassière” came to mean “breast plate” and from there was used for a type of woman’s corset. The word jumped into English around 1900.

6. ___ Cruces : LAS
Las Cruces is the second largest city in the state of New Mexico, and is the home of New Mexico State University.

7. Doffs one’s lid : UNHATS
One doffs one’s hat, usually as a mark of respect. To doff is to take off, with “doff” being a contraction of “do off”.

8. Plant swelling : EDEMA
Both animals and plants can suffer from edema, a swelling cause by excessive accumulation of fluid.

14. Blind component : SLAT
A blind in a window is often composed of slats.

19. Rode the pine : SAT
“To ride the pine” is a colloquial phrase used in sports, meaning that one sits out the game on the bench.

21. Happen : BETIDE
“Betide” is an old word for “happen, happen to”. Most often today we hear it in the phrase “woe betide (someone)” meaning “bad things will happen to (someone)”.

31. Suffix with magnet : -ITE
Magnetite is a form of iron oxide ore, a valuable source of iron. It is the most magnetic of all known minerals, hence the name. Pieces of magnetite called lodestone were used in ancient times to study the property of magnetism.

33. Weekly NBC staple, for short : SNL
NBC first aired a form of “Saturday Night Live” in 1975, under the title “NBC’s Saturday Night”. The show was actually created to give Johnny Carson some time off from “The Tonight Show”. Back then “The Tonight Show” had a weekend episode, and Carson convinced NBC to pull the Saturday or Sunday recordings off the air and hold them for subsequent weeknights in which Carson needed a break. NBC turned to Lorne Michaels and asked him to pull together a variety show to fill the vacant slot, and he come up with what we now call “Saturday Night Live”.

34. Glue brand : ELMER’S
Elsie the cow is the mascot of the Borden Company. Elsie first appeared at the New York World’s Fair in 1939, introduced to symbolize the perfect dairy product. Elsie was also given a husband, Elmer the Bull. Later in Elmer’s life he moved over to the chemical division of Borden where he gave his name to Elmer’s Glue.

38. Center of Good & Plenty candy : LICORICE
Good & Plenty is a brand of candy that has a licorice center surrounded by a hard sugary shell. It was introduced way, way back, in Philadelphia in 1893, making it the oldest candy brand in the country. Until quite recently vegans couldn’t eat the candy because the red ones were colored with a dye collected from crushed female cochineal insects. Ugh …

50. Class with many functions: Abbr. : ALG
We all remember algebraic functions from math class, don’t we? So, I don’t need to explain them here …

52. Asian nanny : AMAH
“Amah” is an interesting word in that we associate it so much with Asian culture, and yet it actually comes from the Portuguese “ama” meaning “nurse”. Ama was imported into English in the days of the British Raj in India when it was used to describe a wet-nurse, an amah.

58. Bobblehead movement : NOD
Bobblehead dolls are those little toys with big heads that bobble around if tapped, while the body remains still. They’re often given to ticket buyers at sports events as a promotion.