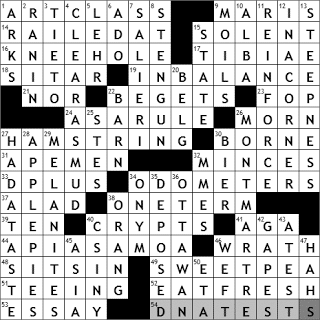 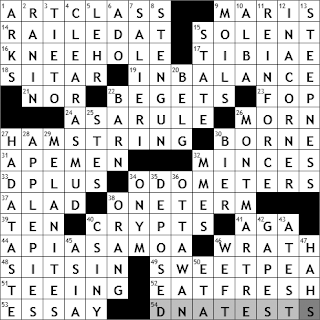 9. Yankee star who batted left and threw right : MARIS
Roger Maris (real name was Roger Maras) was the son of Croatian immigrants. It was Maris’s single season record of 61 home runs that Mark McGwire broke in in 1998 (hitting 70 that season). Maris’s own record of 61 runs (in 1961) beat the previous record of 60 set in 1927 by Babe Ruth.

16. Place to stretch one’s legs : KNEEHOLE
You can stretch your legs in the kneehole of a desk.

17. Leg supports : TIBIAE
The tibia is larger of the two bones right below the knee, and is the strongest weight-bearing bone in the human body. “Tibia” is the Roman name for a Greek flute and it is thought that the shin bone was given the same name because flutes were often fashioned out of the shin bones of animals.

18. It has two bridges in India : SITAR
The sitar has been around since the Middle Ages. It is a stringed instrument that is played by plucking, and is used most often in Hindustani classical music. In the West we have been exposed to the sitar largely through the performances of Ravi Shankar and some music by George Harrison of the Beatles, a one-time student of Shankar.

19. Homeostatic : IN BALANCE
Homeostasis is the ability of a cell, or perhaps an organism, to maintain a balance internally with the external environment. A lack of balance can cause a buildup of toxic chemicals, as in the case of gout, diabetes and even dehydration.

31. Missing links, so to speak : APEMEN
The scientific community doesn’t really embrace the concept of a “missing link” anymore. The idea that the there is or was an “ape man” that links the human species with “lower animals” has fallen by the wayside.

32. Euphemizes : MINCES
To mince words is to use more polite language, to use a euphemism.

37. “___ of life, an imp of fame; / Of parents good …”: “Henry V” : A LAD
Shakespeare’s play “Henry V” is more correctly called “The Life of Henry the Fifth”. The story mainly focuses on his life before and immediately after his celebrated victory over the French at the Battle of Agincourt. The line “A lad of life, an imp of fame” is spoken to Henry on the field of battle.

41. Title in Topkapi : AGA
Topkapi is a neighborhood of Istanbul in Turkey.

An aga, or agha, is a title that was used by both civil and military officials in the Ottoman Empire.

44. Capital served by Faleolo International Airport : APIA, SAMOA
Apia is the capital city, indeed the only “city”, in the Pacific island nation of Samoa. The harbor of Apia is famous for a very foolish incident in 1889 involving seven ships from Germany, the US and Britain. A typhoon was approaching, so the safest thing to do was head for open water away from land, but no one would move for fear of losing face in front of the other nations. Six of the vessels were lost in the typhoon as a result, and 200 American and German sailors perished. The British cruiser HMS Calliope barely managed to escape from the harbor and rode out the storm safely.

52. Subway line : EAT FRESH
Subway founder Fred De Luca opened up his first sandwich shop in 1965, in Bridgeport Connecticut, when he was only 17 years old. There are now over 34,000 Subway franchises in almost 100 countries, with a total of over $9 billion in sales.

54. See 40-Down : DNA TESTS
(40. Hit TV series featuring 54-Across : CSI: NY)
I’ve always been fascinated by the fact that the DNA of living things is so very similar across different species. Human DNA is almost exactly the same for every individual (to the degree of 99.9%). However, those small differences are sufficient to distinguish one individual from another, and to determine if individuals are close family relations.

1. They’re open on Saturdays : ARKS
The Torah ark is found in a synagogue, and is the ornamental container in which are stored the Torah scrolls.

2. Took to the clink : RAN IN
The Clink (also “the Clynke”) was a celebrated prison in Southwark, England owned by the Bishop of Winchester. The prison was given the name “the clink”, probably from the sound made by metal keys in metal locks and metal chains around ankles. The prison was closed down in 1780, and around the same time “clink” entered the English language as a slang term for “jail”.

5. Specialty oven : LEHR
A lehr is a kiln used in glassmaking. Items are annealed in a lehr, meaning that they are cooled slowly so that any stress in the glass is removed. Faster cooling can cause cracks in the work.

7. Real-life opera composer who’s a title character in a Rimsky-Korsakov opera : SALIERI
If you’ve seen the brilliant 1984 movie “Amadeus”, you’ll have seen Salieri portrayed as being very envious and resentful of the gifted Mozart. It is no doubt true that two composers fought against each other, at least on occasion, but the extent of the acrimony between the two has perhaps been exaggerated in the interest of theater. Mozart and his wife had six children, but only two survived infancy. The youngest boy was called Franz Xaver Wolfgang Mozart, born just five months before his father died. Franz was to become a gifted composer, teacher, pianist and conductor, helped along the way by lessons from his father’s supposed rival … Antonio Salieri.

8. Arm of the British military : STEN GUN
The name STEN is an acronym. The S and the T came from the name of the gun’s designers, Shepherd and Turpin. The EN came from the Enfield brand name, which in turn came from location of Enfield, where the guns were manufactured for the Royal Small Arms Factory, an enterprise owned by the British government.

15. Only one bears the name of a U.S. president : STATE
The people from what today is Washington state first petitioned the US Congress for statehood in 1852. At that time the proposal was to name the new state Columbia, but this was rejected as it was felt that a state called Columbia might be confused with the District of Columbia. Somewhat bizarrely, the alternative name of Washington was accepted. Certainly, the name Washington honors the first President, but there’s still potential confusion with the nation’s capital. I hate to admit my ignorance, but as a young man in Ireland whenever I heard talk of Washington state, I assumed the discussion was about Washington DC …

20. E.U. member : BELG
Belgium is one of the six original founding members of the European Community, which evolved into today’s European Union. Belgium’s capital city of Brussels is host to the European Union headquarters.

25. Images on windows of une cathédrale: Abbr. : STES
There are lots of female saints (“saintes”, abbreviated “stes.”) depicted in the stained glass windows of French cathedrals.

26. Area where Dalí, Monet, Picasso and van Gogh all painted : MONTMARTRE
Montmartre is a hill in Paris, home most famously to the beautiful Basilica of the Sacré-Cœur. In the mid-19th century a group of artists moved to Montmartre, and over time turned it into the main artistic center in the city. To this day one can spend a delightful day viewing contemporary works of art for sale in the Place du Tertre in Montmartre.

29. Black gemstones : MELANITES
Andradite is a mineral in the garnet group. There are three varieties of andranite, all of which can be used as gemstones:

30. Stand at a ceremony : BIER
Biers are the special stands on which one rests a coffin for a service, or perhaps if the corpse is to lie in state. A bier may have wheels on it so that it can be used to transport the coffin to the graveside. The original biers were just flat pieces of wood on which the body was placed, covered with a shroud. Nowadays, we place the body in a casket, and then onto the bier.

32. Hugo’s Thénardier and others: Abbr. : MMES
Madame Thénardier is one of the villains in Victor Hugo’s “Les Misérables”.

34. Word: Suffix : -ONYM
The suffix -onym is used to indicate a “word”. Examples of its use are “acronym” (“word” formed from the initials of a name) and “pseudonym” (“word” used as a fictitious name).

36. Senator supporter : OTTAWAN
The Senators are the NHL hockey team in Ottawa, Canada. The current team, founded in the 1992-93 season, is the second NHL team in the city to use the name “Senators”. The original team was founded in 1917, and had a very successful run until the league expanded into the US in the late twenties. The cost of operating in what became the smallest NHL city eventually drove the Senators to St. Louis where they played for a year as the Eagles before finally folding.

38. Rue Morgue murderer : ORANG
“The Murders in the Rue Morgue” is a short story by Edgar Allen Poe, and is recognized as the first “detective story” ever written. The murder is solved when it is determined that the murderer was actually an orangutan.

40. Hit TV series featuring 54-Across : CSI: NY
(54. See 40-Down : DNA TESTS)
The TV show “CSI” gets a lot of criticism from law enforcement agencies for its unrealistic portrayal of the procedures and science of criminal investigation. I don’t care though, as I just think it’s a fun show to watch. The original “CSI” set in Las Vegas seems to have “gone off the boil” lately, but the addition of Sela Ward to the cast of “CSI: NY” has really, really raised the level of the sister show set in New York City.

43. Mushroom grower, for short? : A-TEST
Tests of atom bombs in the atmosphere give rise to large mushroom clouds.

46. Tapestry thread : WEFT
When cloth is woven, yarn is drawn back and forth horizontally through vertical yarns called warps. The horizontal yarn is known as the weft or woof.