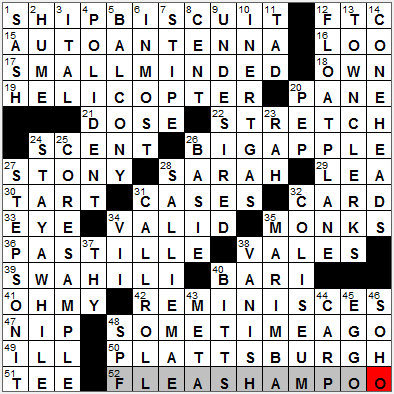 1. Another name for hardtack : SHIPBISCUIT
Hardtack is an easily preserved biscuit that was used in days gone by on long ocean voyages. As such, is was also called “shipbiscuit” and “sea biscuit”. The legendary racehorse called Sea Biscuit was named for the very same food item, as Sea Biscuit was sired by a horse called Hard Tack.

12. Do Not Call Registry org. : FTC
The Federal Trade Commission (FTC) was established in 1914 with the mission of protecting consumers. The FTC runs the National Do Not Call Registry which can limit the amount of telemarketing calls that consumers receive. To register your number, simply go to the website www.donotcall.gov.

16. Can of Prince Albert? : LOO
When I was growing up in Ireland, a “bathroom” was a room that had a bath and no toilet. The separate room with the commode was called “the toilet” or sometimes the W.C. (the water closet). Apparently the term closet was used because in the 1800s when toilets started to be installed indoors they often displaced clothes in a “closet”, as a closet was the right size to take the commode. It has been suggested that the British term “loo” comes from Waterloo (water-closet … water-loo), but no one seems to know for sure.

26. Nickname popularized by a New York Morning Telegraph sportswriter in the 1920s, with “the” : BIG APPLE
Apparently the first published use of the term “Big Apple” to describe New York City dates back to 1909. Edward Martin wrote in his book “The Wayfarer in New York” the following:

27. Adamantine : STONY
The words “adamant” and “adamantine” can mean hard like rock or stony, in the literal sense. In the more figurative sense, someone who is adamantine is stubborn or inflexible.

29. What “the lowing herd wind slowly o’er” in a Thomas Gray poem : LEA
Perhaps the most famous elegy in the English language is that written by Thomas Gray, completed in 1750. “Elegy Written in a Country Churchyard” is the source of many oft-quoted phrases, including:

30. Like cranberries : TART
When early European settlers came across red berries growing in the bogs of the northern part of America, they felt that the plant’s flower and stem resembled the head and bill of a crane. As such, they called it a “craneberry”, which later evolved into “cranberry”.

39. Source of most of the names in “The Lion King” : SWAHILI
Swahili is indeed a widespread language in Africa, but only 5-10 million people speak it as their native language. But there are a lot more speakers than those who use it as a native tongue as Swahili is also the official language of at least four countries: Tanzania, Kenya, Uganda and the Democratic Republic of the Congo. Also, within much of East Africa, Swahili is often spoken as the common language (lingua franca) between people who have different native tongues.

40. Italian seaport that’s home to Saint Nicholas’s relics : BARI
Saint Nicholas of Myra is the inspiration for Santa Claus. Nicholas was the Bishop of Myra (now in modern-day Turkey) during the 4th century AD, and was known for being generous to the poor. Centuries after he died his remains were desecrated by Italian sailors and moved to Bari in Italy. One legend has it that the relics were moved again centuries later and reburied in the grounds of Jerpoint Abbey in Co. Kilkenny in Ireland, where you can visit the grave today. I choose to believe that Santa Claus’s relics are indeed buried in Ireland …

50. Site of the War of 1812 Museum : PLATTSBURGH
The Battle of Plattsburgh, also called the Battle of Lake Champlain, was a significant defeat of the invading British forces that penetrated the northeastern United States during the War of 1812. A concerted attempt by British Navy and Army units to take the town of Plattsburgh in Upstate New York was resisted causing the invaders to retreat to Canada.

4. Something to clean one’s teeth with, maybe : POLIDENT
The Polident brand of denture cleanser was developed by Block Drug, a company in Jersey City, New Jersey. It was founded by a Russian immigrant called Alexander Block, in 1907. Block Drug also developed and introduced Tegrin medicated shampoo and Sensodyne desensitizing toothpaste.

5. Common condo feature : BALCONY
The words “condominium” and “apartment” tend to describe the one type of residential property, a private living space with facilities shared with others residing in the same building or complex. The difference is that a condominium is usually owned, and an apartment is rented. At least that’s how it is in the US. The word “condominium” comes from the Latin “com” (together) and “dominum” (right of ownership).

7. Mushroom stem : STIPE
A mushroom isn’t a complete living organism per se, but rather is one part of a fungus, the fruiting body that is responsible for distributing reproductive spores. The mushroom generally has three main components: the stipe (or stem), the pileus (or cap) and the lamellae (or gills) under the cap which distribute the spores.

8. Flying Eagle, for one : CENT
The Flying Eagle cent was the first “small-sized” cent minted in the US, and was produced from 1856 to 1858. The design was a little difficult to produce and the dies used in manufacture had to be replaced quite often. As a result, the Flying Eagle was replaced by the Indian Cent in 1859.

10. It’s hard to get a reaction out of it : INERT GAS
An inert gas can be different from a noble gas. Both are relatively non-reactive, but a noble gas is an element. An inert gas on the other hand,  might be a compound i.e. made up of more than one element.

12. Aircraft that doesn’t need a runway : FLOATPLANE
A floatplane is different than a flying boat. In the case of a floatplane only the pontoons under the fuselage come into contact with the water. A flying boat uses its waterproof fuselage for buoyancy, much like a ship’s hull.

14. TV family that popularized the term “parental unit” : CONEHEADS
“The Coneheads” first appeared in a “Saturday Night Live” sketch in 1977. The three family members back then were played by Dan Ackroyd (father), Jane Curtin (mother) and Laraine Newman (daughter). The characters became so popular they were featured in a “Coneheads” movie in 1993.

25. What a stratigraphist might take : CORE SAMPLE
Stratigraphy is a discipline in the field of geology. It is the study of rock strata i.e. the distribution and age of sedimentary rock, which is found in layers.

26. “Goin’ to Chicago Blues” songwriter : BASIE
“Count” Basie’s real given name was “William”. Count Basie perhaps picked up his love for the piano from his mother, who played and gave him his first lessons. Basie’s first paying job as a musician was in a movie theater, where he learned to improvise a suitable accompaniment for the silent movies that were being shown.

28. Lending “lady” : SALLIE MAE
“Sallie Mae” is a nickname for SLM Corporation, created in 1972 by the US government as the Student Loan Marketing Association. By 2004 the government had severed all its ties with Sallie Mae, and today it is basically a profit-focused lender.

34. The first manned Apollo mission : VII
The Apollo 7 mission was a real confidence builder for the US Space Program. Launched in 1968, it was the first manned mission after the tragic launch pad cabin fire the prior year that killed astronauts Grissom, White and Chaffee. Because Apollo 7 was a successful flight in Earth orbit, Apollo 8 was sent around the moon two months later.

35. Guatemala’s national instrument : MARIMBA
A marimba is a musical instrument somewhat like a large xylophone.

40. Towlines are tied around them : BITTS
A bitt is a post mounted on the bow of a boat, used for fastening lines and cables. It is designed to be strong enough to hold a towline if necessary.

43. Self-referential, informally : META
In recent decades the prefix “meta-” has started to be used as a standalone adjective. In this sense “meta” means “self-referential”, describing something that refers to itself. For example, “This sentence starts with the word ‘this’ and ends with the word ‘this’” might be called a meta sentence. A movie that is about the making of the very same movie could also be described as meta.

44. Find fault to a fault : CARP
The word “carp” used to mean simply “talk” back in the 13th century, with its roots in the Old Norwegian “karpa” meaning “to brag”. A century later the Latin word “carpere” meaning “to slander” influenced the use of “carp” so that it came to mean “find fault with”.

45. Brand with Toaster Swirlz : EGGO
Eggo is the brand name of a line of frozen waffles made by Kellogs. When they were introduced in the 1930s, the name “Eggo” was chosen to promote the “egginess” of the batter. “Eggo” replaced the original choice for a name, “Froffles”, created by melding “frozen” and “waffles”.

46. Loft-y place? : SOHO
The Manhattan neighborhood known today as SoHo was very fashionable in the early 1900s, but as the well-heeled started to move uptown the area became very run down and poorly maintained. Noted for the number of fires that erupted in derelict buildings, it earned the nickname “Hell’s Hundred Acres”. The area was rezoned for manufacturing and became home to many sweatshops. In the mid-1900s artists started to move into open loft spaces and began renovating old buildings as the lofts were ideal locations in which an artist could both live and work. In 1968, artists and others organized themselves so that they could legalize their residential use of an area zoned for manufacturing. The group they formed took its name from the name given to the area by the city’s Planning Commission i.e “South of Houston”. This was shortened from So-uth of Ho-uston to SoHo, as in the SoHo Artists Association, and the name stuck.

48. No. on a bottle, maybe : SPF
In theory, the Sun Protection Factor (SPF) is a calibrated measure of the effectiveness of a sunscreen in protecting the skin from the harmful UV rays of the sun. The idea is that if you wear a lotion with say SPF 20, then it will take 20 times as much UV radiation to cause the skin to burn if using lotion, than without it. I say, just stay out of the sun …