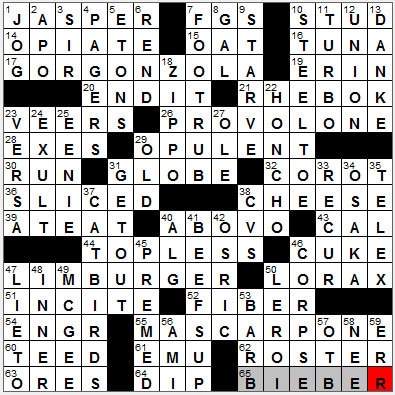 CROSSWORD SETTER: Michael Sharp (aka Rex Parker, the renowned NYTCrossword blogger)
THEME: SLICED CHEESE … all of the theme answers are the names of cheeses, but clued with reference to the name of the cheese “sliced up” into pieces:

1. Traditional March birthstone : JASPER
Jasper is one of the traditional birthstones for March, although it doesn’t appear on my “official” list.

Here is the “official” list of birthstones by month:

10. Hoop alternative : STUD
Guys can buy their gals hoop earrings or stud earrings, or both …

14. What might be a knockout? : OPIATE
Opiates are the narcotic alkaloids found in the opium poppy plant, although some synthetic versions and derivatives of the same alkaloids are also called opiates. To produce opiates, the latex sap of the opium poppy is collected and processed. The naturally occurring drugs of morphine and codeine can both be extracted from the sap. Some synthesis is required to make derivative drugs like heroin and oxycodone.

17. French writer with snaky hair and a petrifying gaze? : GORGON ZOLA (Gorgonzola)
The Gorgons were feared female creatures of Greek mythology. They were three sisters who had hair made up of living snakes. Anyone who looked on their faces would instantly be turned to stone.

The most famous work of French writer Emile Zola is his 1898 open letter “J’Accuse!” written to then French president Félix Faure. It was published on the front page of a leading Paris newspaper, and accused the government of anti-Semitism in its handling of the trial of Captain Alfred Dreyfus. Dreyfus was a Jewish military officer in the French army, falsely accused and convicted of spying for Germany. Even after the error was discovered, the government refused to back down, choosing to let Dreyfus rot away on Devil’s Island rather than admit to the mistake. It wasn’t until 1906, 12 years after the wrongful conviction, that Dreyfus was freed and reinstated, largely due to the advocacy of Emile Zola.

Gorgonzola is an Italian blue cheese that bears the name of the town in Lombardy in which it originated.

19. Sportscaster Andrews : ERIN
Erin Andrews is a sports reporter. I don’t watch much sports but do know Ms. Andrews for her appearances on “Dancing with the Stars” in 2010. She did quite well and made it to the final of the show.

21. Antelope of southern Africa : RHEBOK
The brand name Reebok was adopted as the new company name for Foster Shoes of the UK in 1960. The name Reebok (more commonly “Rhebok”) is an Afrikaans word for an antelope, and comes from the term “roe buck”.

26. In favor of the first book?: Abbr. : PRO VOL ONE (Provolone)
Provolone cheese originated in Southern Italy, although today is mostly produced in the northern part of the country. Provola is also a cheese, and the name “Provolone” means “large Provola”.

31. Unisphere, e.g. : GLOBE
The iconic stainless steel representation of the Earth that sits in Flushing Meadows-Corona Park in Queens, New York, is known as the Unisphere. The Unisphere was constructed for the 1964-65 New York World’s Fair.

40. From the start : AB OVO
Ab ovo translates literally as “from the egg”.

47. One trying to shake a leg, for instance? : LIMB URGER (Limburger)
Limburger is a delicious, strong-smelling cheese from Germany. It originated in the Duchy of Limburg which was located partly in the modern-day Netherlands, Belgium and Germany.

50. Seuss character who “speaks for the trees” : LORAX
“The Lorax” is a children’s book written by Dr. Seuss. It is an allegorical work, questioning the problems created by industrialization, and in particular its impact on the environment.

Dr. Seuss was the pen name of Theodor Seuss Geisel. Geisel was commander of the Animation Department of the USAF during WWII. He was behind many propaganda films including one called “Our Job in Japan”. This propaganda film was used after the war as a basis for the short feature “Design for Death”, a study of Japanese culture released in 1947, and winner of an Oscar for best Documentary.

Mascarpone is a very, very creamy Italian cheese. It is the main ingredient in tiramisu, the dessert.

61. Australian sprinter : EMU
The emu has had a tough time in Australia since man settled there. The aborigines used emus for food and are very adept at hunting them using a variety of traditional techniques. There was even an “Emu War” in Western Australia in 1932 when migrating emus competed with livestock for water and food. Soldiers were sent in using machine guns in an unsuccessful attempt to drive off the emus. The emus were clever, and broke their usual formation and adopted guerrilla tactics, operating as small units. After 50 days of “war”, the military withdrew. Subsequent requests for military help for the farmers were ignored.

65. “Baby” singer Justin : BIEBER
I saw Justin Bieber on television not too long ago for the first time, and boy do I feel old. This heartthrob from Canada was born in 1994(!), and he is recording hit after hit record. Me, I’ll stick with the Beatles …

3. ___ Barton, first Triple Crown winner, 1919 : SIR
Sir Barton was the first ever winner of the American Triple Crown (the Kentucky Derby, Preakness Stakes and Belmont Stakes), achieving the feat in 1919.

5. Short jackets : ETONS
An Eton jacket is usually black, cut square at the hips and with wide lapels. It is named for the design of jacket that is worn by the younger students at Eton College just outside London.

11. Engine type : TURBO
A turbocharger is a device that is designed to extract more power out of an internal combustion engine. It does so by increasing the pressure of the air entering the intake. The pressure increase comes from the use of a compressor, which is cleverly powered by the engine’s own exhaust gases.

18. Nada : ZIPPO
“Nada” is the Spanish word for “nothing”. “De nada” translates literally from the Spanish as “of nothing”, and is used to mean “you’re welcome” or “don’t mention it”. The French have the same expression “de rien”, also translating to “of nothing” and used the same way.

22. Bigwig : HONCHO
Honcho is a slang term for a leader or manager. It comes to us from Japanese, where a “hancho” is a squad (han) leader (cho).

23. Compact Nissan model : VERSA
Nissan is the second largest car manufacturer in its home market of Japan, surpassing even Honda in 2011, but still behind Toyota. Nissan used to sell under the brand name “Datsun”.

34. City of 2 1/2+ million at the mouth of the Yodo River : OSAKA
The Japanese city of Osaka used to be called Naniwa, with the name changing to Osaka some time before 1500. “Osaka” can be translated either as “large hill” or “large slope”.

35. Fax predecessor : TELEX
Telex grew out of the world of the telegraph. What Telex brought to telegraphy was the ability to route messages. Instead of instructing an operator at the other end to route a particular message to the intended party, the operator of a telex could route the message directly to another telex machine by using a rotary dial, very similar to that on a telephone.

37. Mewing passerines : CATBIRDS
“Catbirds” are so named because of their call, a wailing not unlike the meowing of a cat.

38. Walgreens competitor : CVS
The name CVS once stood for Consumer Value Stores, although these days the company uses the acronym to stand for Convenience, Value and Service.

Walgreens is the largest chain of drugstores in the United States, with over 7,500 retail outlets. The company is named for the owner of the first store and founder of the chain, Charles R. Walgreen.

40. N. African land : ALG
Algeria is a huge country, the second largest in Africa (only Sudan is larger), and the largest country on the Mediterranean. The capital of Algeria is Algiers, and the country takes its name from the city.

42. Courtier who invites Hamlet to fence with Laertes : OSRIC
In William Shakespeare’s play “Hamlet”, Osric is the courtier that Claudius dispatches to invite Hamlet to participate in a duel.

49. 1985 N.L. M.V.P. Willie : MCGEE
Willie McGee is a retired professional league baseball player, who spent most of his career with the St. Louis Cardinals.

57. Pony players’ parlor: Abbr. : OTB
Off-Track Betting is the legal gambling that takes place on horse races outside of a race track. A betting parlor can be referred to as an OTB.

58. Formerly, name-wise : NEE
“Née” is the French word for “born”, when referring to a female. The male equivalent is “né”.