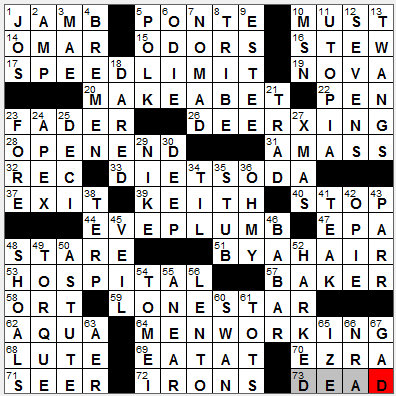 CROSSWORD SETTER: Michael Black
THEME: Colors of Road Signs … all the theme answers are road signs, with each clue simply being the color of the sign:


Today’s Wiki-est, Amazonian Googlies
Across
1. Doorframe part : JAMB
A door jamb is the vertical portion of a door frame. The term “jamb” comes from the French word “jambe” meaning “leg”.

5. ___ Vecchio (Florence landmark) : PONTE
The Ponte Vecchio is a famous bridge that spans the Arno River in Florence, Italy. The bridge dates back to medieval times, and indeed the name “Ponte Vecchio” translates as “Old Bridge”.

14. Bridge maven Sharif : OMAR
Omar Sharif is the great Hollywood actor from Egypt, who played such memorable roles in the movies “Doctor Zhivago” and “Lawrence of Arabia”. But to me he is my bridge hero (the card game). In his heyday he was one of the best players in the world.

16. Bouillabaisse, e.g. : STEW
Bouillabaisse is a traditional seafood stew that originated in the port city of Marseille on the Mediterranean coast of France.

17. [White] : SPEED LIMIT
The first speed limit introduced on a road system was in 1861 in the UK. The limit back then was 10 mph, and this was reduced a few years later to 4 mph in the country, and 2 mph in towns. The highest speed limit ever posted was in Abu Dhabi in the United Arab Emirates from 2005 to 2010, a maximum of 160 km/hr (99 mph). Famously, the autobahns of Germany have no speed limit in rural, uncongested areas.

19. PBS science series : NOVA
When I was growing up in Ireland I used to watch a wonderful BBC television science show called “Horizon”, that had been on the air since 1964. In 1974, PBS struck a deal with the BBC to co-produce a very similar show for American audiences called “Nova”. Often today, a “Horizon” show will simply be a “Nova” episode voiced over by an English narrator, and vice versa. Anyway, for my money, “Nova” is one of the best shows on television …

39. Richards of the Stones : KEITH
Sir Mick Jagger met up with Keith Richards at school when Jagger was only 7-years-old. They were to become one of the most successful songwriting duos of all time, rivaling Lennon and McCartney (some say!).

47. Emissions watchdog, for short : EPA
The Environmental Protection Agency was set up during the Nixon administration, and began operation at the end of 1970.

59. Texas flag feature : LONE STAR
The single star on the state flag of Texas is a reminder of the “lone star” on the 1836 National Standard of Texas. The single gold star on a blue background symbolized Texas as an independent republic and its struggle for independence from Mexico.

68. Troubadour’s instrument : LUTE
A troubadour was a composer and musician of the Middle Ages, whose works dealt mainly with chivalry and courtly love. Troubadours were usually men, and a female troubadour would have been called a trobairitz.

70. Rock’s Better Than ___ : EZRA
Better Than Ezra is an alternative rock band from New Orleans. The band apparently keeps the origins of its name a secret. The fans of the group call themselves “Ezralites”.

3. West of Hollywood : MAE
Mae West was always pushing the envelope when it came to the “sexy” side of show business, even in her early days in Vaudeville. One of the first plays in which she starred on Broadway was called “Sex”, a work she penned herself. The show was a sell-out, but city officials had it raided and West found herself spending ten days in jail after being convicted of “corrupting the morals of youth”. She started in movies in 1932, already 38 years old. West used her experience writing plays to rewrite much of the material she was given, and so really she was totally responsible for her own success and on-screen appeal.

4. German port on the Weser : BREMEN
Germany is divided into 16 states, the smallest of which is Bremen. The state of Bremen is actually made up of two cities, Bremen and Bremerhaven, and is completely surrounded by the much larger state of Lower Saxony.

5. President after Tyler : POLK
James Knox Polk was the 11th US President. He is known as a president who delivered on promises that he made during his election campaign. He left office after serving only one term, as he had sworn to the voters, and then contracted cholera on a goodwill tour of the South. He died at only 53 years of age, the youngest age for any president to die in retirement. He also enjoyed the shortest retirement of any president, at only 103 days. Guess that’s why no one keeps their campaign promises these days …

8. Cleveland Indians nickname, with “the” : TRIBE
The Cleveland baseball franchise started out in 1869 as the Forest Citys named after Forest city, the nickname for Cleveland. After a number of transitions, in 1914 the team took on the name “Indians”. The media came up with name “Indians” after being asked for suggestions by the team owners. “Indians” was inspired by the successful Boston team of the day, the Boston Braves.

9. Cosmetician Lauder : ESTEE
Estée Lauder was quite the successful business woman with a reputation as a great sales person. She introduced her own line of fragrances starting in 1953, a bath oil called “Youth Dew”. “Youth Dew” was marketed as a perfume, but it was designed to be added to bath water. All of a sudden women were pouring whole bottles of Ms. Lauder’s “perfume” into their baths, while using only a drop or two of French perfumes behind their ears. That’s quite a difference in sales volume …

10. Yahoo! competitor : MSN
MSN was originally called The Microsoft Network, introduced in 1995 as an integral part of Microsoft’s Windows 95 operating system. MSN is a whole bundle of services including email, instant messaging, and the MSN.com portal (the 9th most visited site on the Internet).

11. Perfect place : UTOPIA
The word Utopia was invented by Sir Thomas More for his book “Utopia” published in 1516, describing an idyllic fictional island in the Atlantic Ocean. More’s use of the name Utopia comes from the Greek “ou” meaning “not” and “topos” meaning “place”. By calling his perfect island “Not Place”, More was making the point that he didn’t think that the ideal could actually exist.

12. Most common dice rolls : SEVENS
As we all know, the numbers on dice are arranged so that the opposite faces add up to seven. Given this arrangement, the numbers 1, 2 and 3 all meet at a common vertex. Now, there are two ways of arranging the 1, 2 and 3 around the common vertex, a so called right-handed die (clockwise 1-2-3) or a left-handed die (counterclockwise 1-2-3). Traditionally, dice used in Western cultures are right-handed, whereas Chinese dice are left-handed. Quite interesting …

13. Jew’s-harp sounds : TWANGS
The Jew’s harp is one of the oldest instruments in the world, with evidence of its existence in China back in the 4th century BCE. Despite its name, there is no evidence to link the Jew’s harp with the Jewish people. As it is played in the mouth, it’s commonly thought that the name is a corruption of “jaw harp”, but there doesn’t seem to be much evidence for this etymology either.

23. Links alert : FORE
No one seems to know for sure where the term “fore!” comes from. It has been used at least as far back as 1881, and has always been called out to warn other golfers that a wayward ball might be heading their way. My favorite possibility for its origin is that it is a contraction of the Gaelic warning cry “Faugh a Ballach!” (clear the way!) which is still called out in the sport of road bowling, a game where players bowl balls along roads between villages, trying to reach the end of the course in as few bowls as possible, just like in golf!

29. “Swoosh” company : NIKE
I remember seeing Carolyn Davidson on the television show “I’ve Got a Secret”. She created the Nike “swoosh” back in 1971 when she was a design student at Portland State. She did it as freelance work for Blue Ribbon Sports, a local company introducing a new line of athletic footwear. The “swoosh” is taken from the wing of the Greek goddess of victory, Nike. Years later, BRS changed its name to Nike, so I suppose the company should be grateful to Carolyn for both the great design, and a great company name.

38. U. of Maryland player : TERP
The sports teams of the University of Maryland are called the Maryland Terrapins, or “the Terps” for short. The name dates back to 1932 when it was first coined by the the university’s president at the time, Curly Byrd. He took the name from the diamondback terrapins that are native to the Chesapeake Bay.

41. Furniture hardwood : TEAK
Teak is a hardwood tree in the mint family, commonly found in monsoon forests of Asia.

42. Early Ron Howard role : OPIE
Ron Howard sure has come a long way since playing Opie on “The Andy Griffith Show”. He has directed some fabulous movies, including favorites of mine like “Apollo 13”, “A Beautiful Mind” and “The Da Vinci Code”. And today, Opie is a grandfather …

46. Kid-lit elephant : BABAR
“Babar the Elephant” originated in France, a creation of Jean de Brunhoff in 1931. The first book was “Histoire de Babar”, a book so successful it was translated into English two years later for publication in Britain and the US. Jean de Brunhoff wrote six more Babar stories before he died in 1937, and then his son Laurent continued his father’s work.

49. Rotational force : TORQUE
Torque can be thought of as a turning force, say the force needed to tighten a bolt or a nut.

54. Marisa of “My Cousin Vinny” : TOMEI
Marisa Tomei’s first screen role was in “As the World Turns”, but her break came with a recurring role in “The Cosby Show” spin-off, “A Different World”. She won an Oscar for her delightful performance in “My Cousin Vinny” in 1992.

56. Slowly, on a score : LENTO
A lento passage in a piece of music has a slow tempo.

63. ___ Lingus : AER
Aer Lingus is my favorite airline! Well, the service isn’t great, but when I get on board an Aer Lingus plane I feel like I am back in Ireland. Aer Lingus is the national airline of Ireland, with Aer Lingus being a phonetic spelling of the Irish “aer-loingeas” meaning “air fleet”. These days Aer Lingus can only lay claim to the title of Ireland’s oldest airline as it’s no longer the biggest. That honor goes to the controversial budget airline, Ryan Air.

66. Gun lobby org. : NRA
The NRA is the National Rifle Association, an organization that has been around since 1871. The group has had some celebrity presidents, including US President Ulysses S. Grant. It’s often said that the NRA is the most powerful lobbying group in Washington.

67. Roam (about) : GAD
To gad about is to move around with little purpose. The word comes from the Middle English “gadden” meaning “to hurry”.