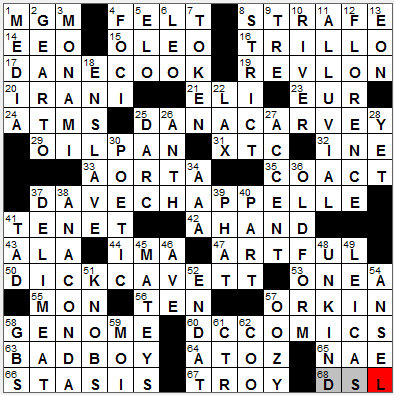 Thank you, everyone, for your patience over the past couple of weeks while I was on vacation. Visiting with both my family and my wife’s family, I had so much fun that I had very little time to devote to crosswords. But I am back, and the blog is back to “normal”.

CROSSWORD SETTER: Albert R. Picallo
THEME: DC COMICS … all of the theme answers are comics with the initials DC:

1. “Ars gratia artis” studio : MGM
It seems that the phrase “art for art’s sake” has its origins in France in the nineteenth century, where the slogan is expressed as “l’art pour l’art”. The Latin version “Ars gratia artis” came much later, in 1924 when MGM’s publicist chose it for the studio’s logo, sitting under Leo the lion. Who’d o’ thunk it?

8. Attack via plane, in a way : STRAFE
We’ve been using “strafe” to mean an attack on a ground position from low-flying aircraft since WWII. Prior to that, the word was used by British soldiers to mean any form of attack. It was picked up from the German word for “punish” as it was used in “Gott strafe England” meaning, “May God punish England”.

14. Fair-hiring letters : EEO
Equal Employment Opportunity (EEO) is a term that has been around since 1964 when the Equal Employment Commission was set up by the Civil Rights Act.

15. Toast topper : OLEO
Emperor Louis Napoleon III of France announced a competition to develop a substitute for butter, something that would be more accessible to the lower classes and more practical for the armed forces. A French chemist called Hippolyte Mege-Mouries came up with something he called oleomargarine in 1869, which was eventually manufactured under the trade name “margarine”.

16. Manny of 1970s-’80s baseball : TRILLO
Manny Trillo is a retired professional baseball player from Venezuela, who played second base for a number of different teams in a career that spanned the seventies and eighties.

17. Performer with a self-titled HBO special in 2006 : DANE COOK
Dane Cook is a stand-up comedian who has had a number of roles in movies as well. He had a set back handling the income he was earning from his work though back in 2008. His half-brother had been his business manager up to that point and it was discovered that he had embezzled millions of dollars from Dane. The half-brother, and his wife, are now in prison for the crime.

19. Fire & Ice cosmetics company : REVLON
Revlon was founded in the depths of the Great Depression in 1932, by Charles and Joseph Revson. The “S” in the Revson name was replaced by the “L” from Charles Lachman, a chemist who partnered with the two brothers.

20. Tabriz native : IRANI
Tabriz is a large city in the very northwest of Iran.

21. Yalie : ELI
Eli is the nickname for a graduate of Yale University, a term used in honor of the Yale benefactor Elihu Yale.

25. Performer with a self-titled ABC series in 1996 : DANA CARVEY
Dana Carvey, along with the likes of Phil Hartman and Kevin Nealon, was part of the new breed of “Saturday Night Live” comedians accredited with resurrecting the show in the late eighties. One of Carvey’s most popular characters was the Church Lady, and he became so associated with her that, among fellow cast members, Carvey was often referred to simply as “the Lady”. Carvey had open-heart surgery in 1997 to clear a blocked artery, but the surgical team operated on the wrong blood vessel. To recover, he had to have five more procedures, so ended up suing for medical malpractice, and donated the $7.5 million compensation payment to charity.

37. Performer with a self-titled Comedy Central series from 2003 to 2006 : DAVE CHAPPELLE
Dave Chapelle is a stand-up comedian who has also had some roles in big movies, like “Robin Hood: Men in Tights” and “Con Air”. He lives on a 65-acre farm outside Yellow Springs, Ohio, the town where his father lived when Dave was growing up in Washington, D.C.

47. Like Dickens’s Dodger : ARTFUL
The Artful Dodger is a marvelous character in “Oliver Twist” by Charles Dickens. The Dodger’s real name is Jack Dawkins, and he is a talented pickpocket and favorite of the devious Fagin.

50. Performer with a self-titled PBS series from 1977 to 1982 : DICK CAVETT
Dick Cavett is best known as a talk show host, with a wonderful sense of humor. He had a long career on TV, appearing regularly from the 1960s through the 2000s.

53. Fit to serve : ONE-A
The US government maintains information on all males who are potentially subject to military conscription, using what is called the Selective Service System (SSS). In the event that a draft was held, men registered would be classified into groups to determine eligibility for service. Class 1-A registrants are those available for unrestricted military service. Other classes are 1-A-O (conscientious objectors available for noncombatant service), 4-A (registrants who have completed military service) and 4-D (ministers of religion).

57. Big name in pest control : ORKIN
Orkin is a pest-control company. If you want to learn more about insects, you might want to visit the O. Orkin Zoo, a permanent exhibit at the Smithsonian in Washington, D.C. The exhibit has over 300 live insects, all displayed in their natural habitats.

58. Subject of scientific mapping : GENOME
The genome of an organism is all the hereditary information needed to reproduce that organism, in other words, all of its chromosomes. When scientists unravel the human genome it takes up an awful lot of computer storage space, and yet all of this information is in almost every cell in our bodies. Every cell “knows” how to make a whole human being.

60. “Captain Marvel” publisher … and a hint to 17-, 25-, 37- and 50-Across : DC COMICS
DC Comics takes its name from what used to be a highly popular series called “Detective Comics”. The main competitor to DC Comics is Marvel Comics, and between the two companies, they command 80% of comic sales in the US market. Nowadays of course, a lot of company income comes from movies that use the most popular characters from the original comics.

67. City tricked with a wooden horse : TROY
The story of the Wooden Horse of Troy is told in the Virgil’s poem “The Aeneid”. According to the tale, the city of Troy finally fell to Greeks after a siege that had lasted for ten years. In a ruse, the Greeks sailed away in apparent defeat, leaving behind a large wooden horse. Inside the horse were hidden 30 crack soldiers, and when the horse was dragged into the city as a victory trophy, the soldiers sneaked out and opened the city’s gates. The Greeks returned under cover of night, and entered the open city.

68. Alternative to cable : DSL
DSL originally stood for Digital Subscriber Loop, but is now accepted to mean (Asymmetric) Digital Subscriber Line. DSL is the technology that allows Internet service be delivered down the same telephone line as voice service, by separating the two into different frequency signals.

Down
3. “My friend,” in Marseille : MON AMI
Marseille (often written “Marseilles” in English) is the second largest city in France, after Paris. It’s also the largest commercial port in the country. I used to live nearby, and it’s a lovely, lovely place.

5. “Don’t Bring Me Down” band, informally : ELO
ELO of course stands for the Electric Light Orchestra, a symphonic rock group from the north of England. Their manager was Don Arden, father of Sharon Osbourne (wife of Ozzy).

6. 1-Across’s roarer : LEO
1A. “Ars gratia artis” studio : MGM
There has been a lion in the logo of the MGM studio since 1924. The original was an Irishman (!), a lion named Slats who was born in Dublin Zoo in 1919. However, it wasn’t until Jackie took over from Slats in 1928 that the roar was heard, as the era of silent movies was coming to an end. The current lion is called Leo, and he has been around since 1957.

7. Straphanger’s buy, once : TOKEN
“Straphanger” is a slang term for someone who rides the subway or a bus i.e. stands on the vehicle, hanging onto a strap for balance.

10. Styx, for one : RIVER
The River Styx in Greek mythology was the river that formed the boundary between the Earth and the Underworld (also called Hades). The souls of the newly dead had to cross the River Styx in a ferryboat piloted by Charon. Traditionally, a coin would be placed in the mouths of the dead “to pay the ferryman”.

11. Like soil in a delta : ALLUVIAL
Alluvial soil is loose and easily moved along by flowing water.

12. City on the Arno : FLORENCE
The Arno is the principal river in the Tuscany region of Italy, and passes through the cities of Florence and Pisa. Famously, the Arno flooded in 1966, the worst flood in the region for centuries. There were numerous deaths and extensive destruction of priceless art treasures, particularly in Florence.

25. Ste. Jeanne ___ : D’ARC
Joan of Arc led the French Army successfully into battle a number of times during the Hundred Years War with England. When she was eventually captured she was tried in Rouen, the seat of the occupying English government in France at that time. There she was burned at the stake having been found guilty of heresy. Joan of Arc was canonized some 600 years later, in 1920, and is now one of the patron saints of France.

37. Bologna or salami : DELI MEAT
The deli meat “boloney” is an American invention. It was given the name “boloney” because it resemble Italian mortadella sausage, which originated in the city of Bologna in northern Italy.

Salame (note the “e” at the end) is an Italian sausage that is traditionally associated with Italian peasants. The meat in the sausage is preserved with salt, and it can be hung and stored for maybe as long as ten years. The name “salame” comes from “sale”, the Italian word for salt, and “-ame”, a suffix indicating a collective noun. Our English word “salami” is actually the Italian plural for “salame”.

38. Crushing snake : ANACONDA
Anacondas are native to the tropical regions of South America. The green anaconda is one of the world’s largest snakes, growing to 17 feet long and weighing up to 215 pounds! Anacondas are not venomous, and prefer to kill their prey by coiling around it and then squeeeeeezing …

40. Thespian’s aim : PART
The term “Thespian” is used for an actor. It derives from the name of the Greek poet of the 6th century, Thespis, known as the father of Greek tragedy.

49. Some German cameras : LEICAS
Leica is a German optics company, famous for production of lenses and cameras. The 1913 Leica was the first practical camera that could use 35mm film, a size chosen because it was already the standard for film used in motion pictures.

54. Photographer Adams : ANSEL
As an amateur photographer, I have been a big fan of the work of Ansel Adams for many years and must have read all of his books. He was famous for the clarity and depth in his black and white images. Central to his technique was the use of the zone system, his own invention. The zone system is a way of controlling exposure in an image, particularly when there is a high contrast in the subject. Although the technique was developed for black & white film primarily, it can even apply to digital color images. In the digital world, the main technique is to expose an image for the highlights, and one or more images for the shadows. These images can then be combined digitally giving a final image with a full and satisfying range of exposures.

58. “Pygmalion” monogram : GBS
George Bernard Shaw was a very successful Irish playwright. He is the only person to have been awarded both a Nobel Prize for Literature, and an Oscar. Shaw won his Oscar for the adapting his own play “Pygmalion” for the 1938 film of the same name starring Leslie Howard and Wendy Hiller. Most people are more likely to have seen the musical adaption of “Pygmalion” that went by the title … “My Fair Lady”.