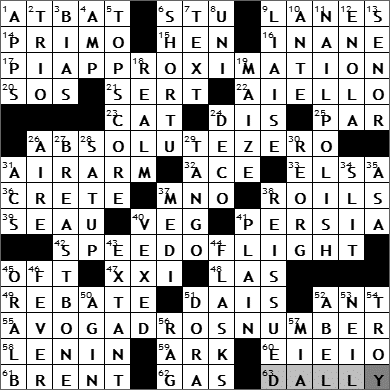 CROSSWORD SETTER: Tom Baring
THEME: The Numbers … all the theme answers are the names used for famous numbers (given in the equivalent clue):

15. Coop resident : HEN
An Old English word for basket (“cypa”) started to be used in the 14th century as the word “coop”, meaning a small cage for poultry, a word we still use today.

17. 3.14159 : PI APPROXIMATION
If you divide the circumference of any circle by its diameter, then the resulting number is always the same, and is denoted by the Greek letter “pi”. It is approximately equal to 22/7, or 3.14159.

The first three digits of the constant pi are 3.14, so Pi Day is celebrated on March 14th, every year since 1988 when it was inaugurated at the San Francisco Exploratorium. In countries where the day is usually written before the month, Pi Day is July 22nd, reflecting the more accurate approximation of pi as 22/7. Interestingly, March 14th is also Albert Einstein’s birthday.

20. “Send help!” : SOS
The combination of three dots – three dashes – three dots, is a Morse signal first introduced by the German government as a standard distress call in 1905. The sequence is remembered as the letters SOS (three dots – pause – three dashes – pause – three dots), although in the emergency signal there is no pause between the dots and dashes, so SOS is in effect only a mnemonic. Similarly, the phrases “Save Our Souls” and “Save Our Ship” are simply mnemonics, introduced after the “SOS” signal was adopted.

21. Spanish muralist José María ___ : SERT
José Maria Sert was a painter of murals from Catalan, and a friend of Salvador Dali.

22. Danny of “Do the Right Thing” : AIELLO
Danny Aiello is an actor from New York City, famous for playing Italian American roles on the big and small screens. His most successful part was Sal Frangione, the pizza parlor owner in Spike Lee’s “Do the Right Thing”. His performance in that film earned him a nomination for a Best Supporting Actor Oscar.

25. 72, at Pebble Beach : PAR
Pebble Beach Golf Links, located just south of Monterey, California, is a public course. It was the first public golf course to be chosen as the top course in the country by “Golf Digest”.

26. -273.15°C : ABSOLUTE ZERO
Absolute zero is a temperature that can theoretically be reached by removing all the “energy” of the test vehicle that is being “frozen”. This temperature is designated as 0 degrees on the Kelvin scale, equivalent to -273.15 degrees centigrade. Scientists try to get as close to absolute zero as possible because matter has weird and wonderful properties at such cold temperatures, such as superconductivity and superfluidity.

33. “Born Free” lioness : ELSA
Elsa’s life story was told by game warden Joy Adamson, who had a very close relationship with the lioness from when she was orphaned as a young cub. Adamson wrote the book “Born Free” about Elsa, and then “Living Free” which told the story of Elsa and her three lion cubs. In the 1966 film “Born Free” Adamson is played by actress Virginia McKenna.

36. Island of the Minotaur : CRETE
Crete is the largest of all the Greek islands. It figures prominently in Greek mythology, for example as the birthplace of Zeus, and home to the Minotaur slayed by Theseus. It was also from Crete that Icarus and Daedalus escaped using wings that they constructed for themselves.

39. Former N.F.L. great Junior ___ : SEAU
Junior Seau is a retired NFL linebacker, first playing for the San Diego Chargers, and then the Miami Dolphins and the New England Patriots.

45. Frost’s “The ___-Repeated Dream” : OFT
The wonderful poet Robert Frost was a native of San Francisco. He was well recognized for his work during his lifetime, and received four Pulitzer Prizes for Poetry.

47. Amendment that repealed Prohibition : XXI
The 18th Amendment to the US Constitution was a great victory for the temperance movement, and in 1919 ushered in the Prohibition era. Highly unpopular, Prohibition was repealed in 1933 by the 21st Amendment.

48. ___ Cruces, N.M. : LAS
Las Cruces (Spanish for “the crosses”) is the second largest city in the state of New Mexico, and is the home of New Mexico State University.

55. 6.022 x 10^23 : AVOGADRO’S NUMBER
The Italian scientist Amedeo Avogadro postulated that if two different gases have the same volume (at the same temperature and pressure), then each of the gases contains the same number of atoms or molecules. Related to this theory is a constant number, that later became known as Avogadro’s number.

58. October Revolution leader : LENIN
At the second party congress of the Marxist Russian Social Democratic Labour Party in 1903, a split developed. The faction with the most support was led by Vladimir Lenin, and as they were in the majority, they became known as the Bolsheviks, derived from the Russian word for “more” or “majority”. Lenin and the Bolsheviks led the October Revolution of 1917, as a result of which Lenin came to power. He headed the new Soviet State during it’s formative years.

59. Ararat lander : ARK
Mount Ararat is in Turkey. Ararat is a snow-capped, dormant volcano with two peaks. The higher of the two, Greater Ararat, is the tallest peak in the country. Ararat takes its name from a legendary Armenian hero called Ara the Beautiful (or Ara the Handsome).

60. Kids’ song refrain : EIEIO
There was an American version of the originally English children’s song “Old MacDonald Had a Farm”, that was around in the days of WWI. The first line of the US version goes “Old Macdougal had a farm, in Ohio-i-o”.

1. iPhone programs : APPS
Apple started selling the iPhone at 6 pm local time on June 29, 2007, with hundreds of customers lined up outside stores all over the world. Not me. I use a pay-as-you-go phone from T-Mobile

, that cost me less than $45 for the whole of last year for calls and text (including many to Ireland) …

2. The Stooges, e.g. : TRIO
If you’ve seen a few of the films starring “The Three Stooges” you’ll have noticed that the line up changed over the years. The original trio was made up of Moe and Shemp Howard (two brothers), and Larry Fine (a good friend of the Howards). This line up was usually known as “Moe, Larry and Shemp”. Then Curly Howard replaced his brother when Shemp quit the act, creating the most famous trio, “Moe, Larry And Curly”. Shemp returned when Curly had a debilitating stroke in 1946, and he stayed with the troupe until he died in 1955. Shemp was replaced by Joe Besser, and then “Curly-Joe” DeRita. When Larry had a stroke in 1970, it effectively marked the end of the act.

24. Retro art style : DECO
Art Deco is the name given to a style of design and architecture of the 1920s, that actually had its roots in Belgium and then spread throughout Europe before arriving in North America. Celebrated examples of art deco architecture are the magnificent Chrysler Building in New York City completed in 1930, and the GE Building that sits in the middle of Rockefeller Center also in New York City, with the address of “30 Rock”.

29. “Dancing With the Stars” dance : TANGO
When I was growing up in the British Isles, there was a surprisingly popular BBC television show featuring professional ballroom dancing called “Come Dancing”. It ran almost every year from 1949 to 1998, and in 2004 the BBC resurrected it with a new twist, adding celebrities to dance with the professionals. The new show, “Strictly Come Dancing” is a huge success, and has become a worldwide franchise. Over here we watch the American spin-off called “Dancing with the Stars”. It really is fun television …

40. In a pique : VEXED
Our word “pique” meaning a “fit of ill feeling” is a French word meaning a “prick, sting, irritation”.

43. Not extinct : EXTANT
Extant … it’s not lost, it’s still in existence. “Extant” comes from the Latin “exstare”, to stand out.

51. Explorer of kiddie TV : DORA
“Dora the Explorer” is a cartoon series shown on Nickelodeon.

52. Genesis brother : ABEL
The story of Cain and Abel not only appears in the Bible, it also features in the Qur’an. In the Muslim account the brothers are named Kabil and Habil.

53. Moonmate of Buzz : NEIL
Neil Armstrong is the most private of individuals. You don’t often see him giving interviews, unlike so many of the more approachable astronauts of the Apollo space program. His famous, “That’s one small step for (a) man, one giant leap for mankind” statement, that was something that he came up with himself while Apollo 11 was making its way to the moon.

54. “Iliad” locale : TROY
Ilion (or in Latin “Ileum”), was the ancient name for the city of Troy. It’s this name for Troy that gives rise to the title of Homer’s epic poem “Iliad”.

57. Farrow of “Rosemary’s Baby” : MIA
Mia Farrow is an energetic, award-winning actress who really hasn’t looked back in her career since her first leading role, in “Rosemary’s Baby” back in 1968. Her on-screen celebrity is matched by the interest created by her personal life. Her first husband was Frank Sinatra, a wedding in 1966 that received a lot of attention partly due to the couple’s age difference (she was 21, he was 50). Her second husband was almost as famous, the magnificent musician André Previn. Farrow then moved in with Woody Allen, a relationship that famously fell apart when Farrow discovered that Allen was having a sexual relationship with Soon-Yi, one of her adopted daughters from the marriage with André Previn.