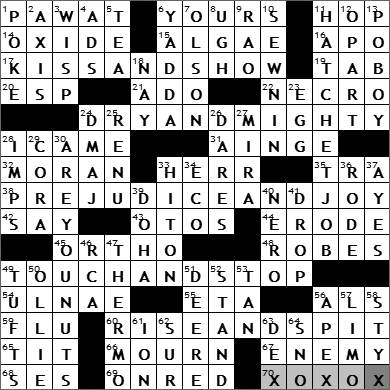 CROSSWORD SETTER: Michael Blake & Andrea Carla Michaels
THEME: Pairs of Partners … every theme answer is a pair of words, each of which is often paired with the key word in the clue:


Today’s Wiki-est, Amazonian Googlies
Across
14. Nitrous ___ : OXIDE
Laughing gas is the common name for nitrous oxide. Nitrous oxide is used as an anesthetic, particularly by dentists. It is also used in motor racing to increase the power output of engines. Laughing gas was first synthesized by the English chemist Joseph Priestly, but it was Humphrey Davy who discovered its potential as an anesthetic. Once it was realized that the gas could give the patient a fit of the giggles, “laughing gas parties” became common among those could afford them.

19. Indent key : TAB
Like most features on our computer keyboards, the tab key is a hangover from the days of typewriters. When using a typewriter, making entries into a table was very tedious, involving lots of tapping on the space bar and backspace key. So, a lever was added to typewriters that allowed the operator to “jump” across the page to positions that could be set by hand. Later this was simplified to a tab key which could be depressed, causing the carriage to jump to the next tab stop in much the same way that the modern tab key works on a computer.

28. Beginning of Caesar’s boast : I CAME
The oft-quoted “Veni, vidi, vici” (“I came, I saw, I conquered”) is believed by many to have been written by Julius Caesar. The words date back to 47 BC and refer to the short war between Rome and Pharnaces II of Pontus.

31. Danny of the Celtics : AINGE
Danny Ainge is a retired professional basketball and baseball player, now serving as the President of Basketball Operations for the Boston Celtics. Ainge was an outstanding athlete from an early age, and is the only person to be named a high-school All American in the three sports of football, basketball and baseball.

32. Gangster Bugs : MORAN
Bugs Moran was a Chicago gangster, the main rival to the slightly more famous Al Capone. Moran tried twice to kill Capone. In the first attempt Moran and his gang shot at Capone from their car as their target was getting out of his own automobile. They missed Capone, and he took to driving in an armored vehicle after that. The second, more famous attempt (in 1926), involved Moran and a fleet of cars driving by Capone’s hotel and spraying the lobby in which he was standing. Again, Capone escaped unharmed. Three years later, in February 1929, six members of Moran’s gang were lined up against a wall and shot by order of Capone, an incident we now remember as the famous St. Valentine’s Day Massacre.

Münster is a city in the northwestern part of Germany, in the Westphalia region. Münster is noted for being the most bicycle-friendly city in the country with almost 40% of all traffic in the city being cyclists.

38. Pride partners? : PREJUDICE AND JOY
Mr. Fitzwilliam Darcy has to be one of the great romantic leads in English literature. He of course appears opposite Miss Elizabeth Bennet in Jane Austen’s “Pride and Prejudice”. There have been many (terrible) “sequels” written for “Pride and Prejudice”, but I have read one “spin off” that I heartily recommend if you’d like to explore the story of Elizabeth and Darcy some more. There is a three-part novel called “Fitzwilliam Darcy: Gentleman

” written by Pamela Aiden and published in 2003-2005. Ms. Aiden does a great job retelling the story of “Pride and Prejudice”, but from Darcy’s perspective. It really is a great read, even for die-hard Austen fans …

55. Second letter after epsilon : ETA
Eta is the seventh letter of the Greek alphabet, and is a forerunner of our Latin character “H”.

56. Artist Hirschfeld and namesakes : ALS
Al Hirschfeld was a caricaturist known for sketching simple, black and white portraits of celebrities. His wife gave birth to a daughter in 1945 who they called Nina. Soon after her arrival into the world, Hirschfeld started to include Nina’s name in his portraits, hiding the word “Nina” somewhere in the drawing. Often her name would appear more than once, so Hirschfeld got in to the habit of adding a number after his signature, denoting how many times “Nina” appeared. In 1966 he drew a portrait of Nina herself, and titled it “Nina’s Revenge”. There wasn’t even one occurrence of Nina’s name in the drawing, but there were two appearances each of “Al” and “Dolly”, Nina’s parents!

59. Grippe : FLU
“Grippe” is an archaic term for influenza, and is the French term for the disease.

65. Lead-in for mouse or willow : TIT
“Tit Willow” is a song from Gilbert & Sullivan’s “The Mikado”. The song refers to the Willow Tit, a small bird found right across Europe and Asia.

69. When a right may be permitted : ON RED
If you’re sitting behind a car that doesn’t make a right on red, it may just be a rental car driven by someone from Europe. Speaking as someone who learned to drive over there, I must admit I held up a few people at red lights when I first visited this country. That’s because in Europe we aren’t allowed to make any move past a red light, unless there is an accompanying green arrow. So, if you’re driving over there, take care …

70. Complimentary close : XOXOX
In the sequence XOXOX, I think the X represents a kiss, and the O a hug. Hugs and kisses …

Down
2. Something to reflect on? : AXIS
A mathematical reflection reflects on or around an axis.

4. TiVo users may skip them : ADS
TiVo was introduced in 1999, the world’s first commercially successful DVR (Digital Video Recorder). If you don’t have a DVR, you might want to consider getting one. For those who enjoy television, it’s very liberating.

7. TV announcer Johnny : OLSON
Johnny Olson was the announcer on “The Price is Right” from day one in 1972, until he passed away in 1985.

12. Pictures that may make you dizzy : OP ART
Op art is also known as optical art, and puts optical illusions to great effect.

13. Hero of New Orleans : PO’ BOY
A po’ boy is a submarine sandwich from Louisiana. There are a lot of theories about where the name came from, and none sound too convincing to me. A po’ boy differs from a regular submarine sandwich in that it uses Louisiana French bread, which is soft in the middle and crusty on the outside.

26. Motivations for some bungee jumps : DARES
The first Bungee jump using the modern latex cord was from the Clifton Suspension Bridge in Bristol, England. It was an illegal jump, with all five jumpers getting arrested soon after “hitting” the ground.

27. Sorvino of “Mighty Aphrodite” : MIRA
Mira Sorvino is an American actress, winner of an Oscar for her supporting role in the 1995 Woody Allen movie “Mighty Aphrodite”. She also played a title role opposite Lisa Kudrow in the very forgettable “Romy and Michele’s High School Reunion”.

29. Julius Dithers’s wife in “Blondie” : CORA
“Blondie” was created as a comic strip by Chic Young. It was first published in 1930, and is still being created today (although the strip is now controlled by Chic’s son, Dean). The strip spawned a series of radio programs (1939-1950) and a series of Blondie films (1938-1950). Blondie is married to Dagwood Bumstead. Dagwood slaves away at a construction company run by Julius Dithers, whose wife is called Cora.

39. Qatari capital : DOHA
Doha is the capital city of the state of Qatar located on the Persian Gulf. The name “Doha” translates from Arabic as “the big tree”.

40. Pianist Peter : NERO
Peter Nero is a pianist and conductor of “pops” orchestral concerts. He had a huge hit in the pop music charts in 1971 with the theme tune from the movie “Summer of ’42”.

46. “His Master’s Voice” label : RCA
Nipper is the name of the dog that appeared in the RCA logo. Nipper was a real dog, actually from England. Nipper’s owner, Francis Barraud, made a painting of him listening to a gramophone. He then approached several gramophone manufacturers in the hope they would be interested in using the image for advertising. It was indeed picked up, and around that time it was Barraud himself who came up with the slogan “His Master’s Voice”.

49. University in Medford, Mass. : TUFTS
Tufts University is a private school near Boston. The school was built in 1852 on land donated by Charles Tuft a local businessman. One of the early benefactors of the school was P. T. Barnum who funded the Barnum Museum of Natural History located on the college grounds. This museum is home to the stuffed hide of Jumbo, the famous elephant. Jumbo is the school’s mascot.

50. Friend of Kukla : OLLIE
“Kukla, Fran and Ollie” is an early television show that aired from 1947-1957. Kukla and Ollie (Oliver J. Dragon) were puppets and Fran was Fran Allison, usually the only human on the show.

51. Caterpillar rival : DEERE
John Deere invented the first commercially successful steel plow in 1837. Prior to Deere’s invention, farmers used an iron or wooden plow that constantly had to be cleaned as rich soil stuck to its surfaces. The cast-steel plow was revolutionary as its smooth sides solved the problem of “stickiness”.

57. It might roll up to a red carpet : LIMO
The word “limousine” actually derives from the French city of Limoges. The area around Limoges is called the Limousin, and it gave its name to a cloak hood worn by local shepherds. In early motor cars, a driver would sit outside in the weather, while the passengers would sit in the covered compartment. The driver would often wear a limousin-style protective hood, giving raise to that type of transportation being called a “limousine”. Well, that’s how the story goes anyway …

62. Big ___, Calif. : SUR
Big Sur is a lovely part of the California Coast, south of Monterrey and Carmel. The name “Big Sur” comes from the original Spanish description of the area as “el sur grande” meaning “the big south”.

63. Jazz saxophonist Gordon, familiarly : DEX
Dexter Gordon was an influential jazz saxophonist, and also an Oscar-nominated actor for his role in the 1986 movie “Round Midnight”. The movie is about an American sax player in Paris in the fifties, a part for which Gordon was well suited as he spent fifteen years in Europe himself, mostly in Paris and Copenhagen.

64. ___-Caps (movie snacks) : SNO
Sno-Caps are a brand of candy usually only available in movie theaters. Sno-caps have been around since the twenties, would you believe?