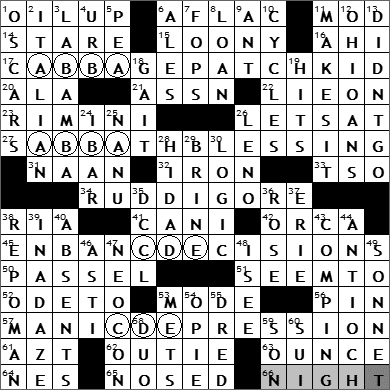 
Today’s Wiki-est, Amazonian Googlies
Across
6. Company with a spokesduck : AFLAC
In 1999 Aflac was huge in the world of insurance but it wasn’t a household name, so a New York advertising agency was given the task of making the Aflac brand more memorable. One of the agency’s art directors, while walking around Central Park one lunchtime, heard a duck quacking and in his mind linked it with “Aflac”, and that duck has been “Aflacking” ever since …

11. Like Carnaby Street fashions : MOD
Carnaby Street is in Soho in London, and is a famous for its fashion boutiques. Carnaby Street gained a reputation for leading the mod and hippie styles of dress in the late fifties and sixties. Mary Quant, who introduced the world to the miniskirt, had her boutique in Carnaby Street, and bands like the Rolling Stones and the Who worked and socialized in the area in the Swinging Sixties.

Mod is short for modernist, and described a subculture that originated in London in the late fifties. Young men who called themselves mods tended to wear tailored suits, listen to pop music and drive around on Italian motor scooters. Mods came into conflict with another subculture that emerged at the same time in the UK, the rockers. Rockers were into rock and roll music, and drove motor cycles. I remember as a young kid in school having to declare myself as either a mod or a rocker. I don’t think our schoolyard “gangs” back then were quite the same as they are today …

17. Adoptable doll of the ’80s : CABBAGE PATCH KID
The dolls known as the Cabbage Patch Kids were introduced in 1978, and were a huge fad through most of the eighties.

21. Part of N.A.A.C.P.: Abbr. : ASSN
The full name of the NAACP, the National Association for the Advancement of Colored People, is remarkable in that it actually still uses the old but offensive term “colored people”. The NAACP was founded in 1909, by three white people: suffragette and journalist Mary White Ovington, wealthy socialist William English Walling, and civil rights activist Henry Moscowitz.

23. Adriatic seaport : RIMINI
Rimini is the most famous resort city on the Adriatic Riviera. Rimini’s most famous son might be the film director, Frederico Fellini.

31. Bread from a tandoor : NAAN
In an Indian restaurant, naan bread is very popular. Naan is traditionally baked in a clay oven known as a tandoor.

32. A Monopoly token : IRON
There are 12 metal tokens used in Monopoly these days, including the iron. Two tokens, the battleship and the cannon (aka howitzer), were added to the Monopoly game set as part of a recycling exercise. The pieces were intended for the game “Conflict” released in 1940, but when Parker Bros. pulled the game off the market due to poor sales, they added their excess battleships and cannons to Monopoly.

33. General on Chinese menus : TSO
General Tso’s chicken is an American invention on the menu of a Chinese restaurant. The name General Tso may be a reference to General Zuo Zontang of the Qing Dynasty, but there is no clear link.

34. Gilbert and Sullivan’s follow-up to “The Mikado” : RUDDIGORE
“Ruddigore” is the tenth in a series of comic operas by Gilbert & Sullivan. The ninth of the fourteen operas penned by the pair was “The Mikado”, a smash hit to this day. “Ruddigore” was the follow-on opera, but a major disappointment to audiences.

42. Predator of seals : ORCA
The taxonomic name for the killer whale is Orcinus orca. The use of the name “orca”, rather than “killer whale”, is becoming more and more common. The Latin word “Orcinus” means “belonging to Orcus”, with Orcus being the name for the Kingdom of the Dead.

45. Some Court of Appeals work : EN BANC DECISIONS
“En banc” is a French term, translating as “on a bench”. It refers to the cases in which all the judges of a court hear a case, as opposed to a case heard just by a panel, a subset of the full complement.

50. Whole lot : PASSEL
A “passel” is a large group or quantity, and is a variation of the word “parcel”.

52. Start of a number of Keats titles : ODE TO
John Keats is famous for a writing a whole series of beautiful odes, in particular the so-called “1819 Odes”, a collection from the year 1819 that includes famous poems such as “Ode on a Grecian Urn”, “Ode to a Nightingale” and “Ode to Psyche”.

56. Corsage part : PIN
“Corsage” is a word we imported from French in the late 15th century. Back then we used it to mean “the size of the body”. By the early 1800s a corsage was a bodice, or the body of a woman’s dress. At the beginning of the 20th century, the French term “bouquet de corsage” was being used for a “bouquet worn on the bodice”, and this has been shortened simply to “corsage”.

57. “An Unquiet Mind” subject : MANIC DEPRESSION
“An Unquiet Mind” is a memoir written by the clinical psychologist Kay Redfield Jackson. In the book, Jackson describes her life and her struggle with manic depression.

61. Drug taken in “Rent” : AZT
The musical “Rent” is based on the Puccini opera “La bohème”. It tells the story of struggling artists and musicians living in the Lower East Side of New York, against the backdrop of the AIDS epidemic.

AZT is the abbreviated name for the drug azidothymidine, much used in the treatment of HIV/AIDS. AZT was originally developed in the seventies as a potential treatment for retroviruses (cancer-causing viruses), although it was never approved for use in treatment. In 1984, it was confirmed that AIDS was caused by the human immunodeficiency virus (HIV), so scientists turned to known antiviral drugs in the search for a viable treatment. Burroughs-Wellcome came up with a treatment regime using AZT, and filed a patent in 1985. The patent was challenged in court, but the patent expired anyway in 2005 without any decision being made. There are now at least four generic forms of AZT approved for sale in the US.

66. Dracula’s time : NIGHT
“Dracula” is a novel written by the Irish author Bram Stoker, and first published in 1897. Dracula wasn’t the first vampire of literature, but he certainly was the one who spawned the popularity of vampires in theater, film and television, and indeed more novels. Personally, I can’t stand vampire fiction …

Down
1. Annual Kodak Theatre events, with “the” : OSCARS
The Academy of Motion Picture Arts and Sciences (AMPAS) is the organization that gives the annual Academy Awards also known as the “Oscars”. The root of the name “Oscar” is hotly debated, but what is agreed is that the award was officially named “Oscar” in 1939.

2. With 49-Down, its form follows the pattern of the circled letters : ITALIAN
(49. See 2-Down : SONNET)
A sonnet is a 14-line poem with a specific structure and rhyming scheme. A popular rhyming scheme for what is known as the Italian sonnet is ABBA, ABBA, CDECDE. Compare this with the Shakespearean sonnet which rhymes as ABAB, CDCD, EFEF, GG.

3. Biopic about Ritchie Valens : LA BAMBA
“La Bamba” is a Mexican folk song that was recorded by Ritchie Valens in 1958. “La Bamba” appears in the oft-cited list of the 500 Greatest Songs of All Time compiled by “Rolling Stone” magazine, and is the only song in the list not sung in English. The song lent its name to the 1987 biopic about the life of Ritchie Valens, starring Lou Diamond Phillips as Valens.

8. Shylock’s offering : LOAN
Famously, at the climax of William Shakespeare’s “The Merchant of Venice”, Antonio goes on trial because he cannot repay a loan to Shylock of 3,000 ducats. Faced with non-payment, Shylock demands his legal right to “a pound of flesh”.

12. Buckeyes : OHIOANS
Ohio is sometimes referred to as the Buckeye State, taking the name from the state tree. In turn, the buckeye tree gets its name from the appearance of its fruit, a dark nut with a light patch, thought to resemble a “buck’s eye”.

25. When repeated, Mork’s sign-off : NANU
“Mork & Mindy” was broadcast from 1978 to 1982. We were first introduced to Mork (played by Robin Williams, of course) in a special episode of “Happy Days”. The particular episode in question has a bizarre storyline culminating in Fonzie and Mork having a thumb-to-finger duel. Eventually Richie wakes up in bed, and alien Mork was just part of a dream! Oh, and “Nanu Nanu” means “hello” back on the planet Ork. “I am Mork from Ork, Nanu Nanu”. Great stuff …

26. TV monologist : LENO
Jay Leno is a car nut, and owns about 200 vehicles of various types. You can check them out on his website!

28. Gridder’s on-air greeting, maybe : HI, DAD
We never used the word “gridiron” when I was growing up (meaning a grill used for cooking food over an open fire). So, maybe I am excused for finding out fairly recently that a football field gridiron is so called because the layout of yard lines over the field looks like a gridiron used in cooking!

30. Boolean ___ : LOGIC
Boolean logic is a logic system used in computers. The system takes its name from the man who devised it, George Boole, in 1854.

37. Canal of song : ERIE
The song “Fifteen Miles on the Erie Canal” was written in 1905. The lyrics are nostalgic, and look back to the days when traffic on the canal was pulled by mules, bemoaning the introduction of the fast-moving engine-powered barges. The first line is “I’ve got an old mule and her name is Sal”.

46. Source of bubbly : ASTI
Asti is in the Piedmont region of northwestern Italy. It is perhaps most famous for its Asti Spumante sparkling white wine.

47. Ex-lib, perhaps : NEOCON
By definition, a neoconservative supports the use of American power and military to bring democracy, liberty, equality and human rights to other countries.

53. Willie Mays’s last team : METS
Willie Mays’ nickname was the “Say Hey Kid”, although his friends and teammates were more likely to refer to him as “Buck”. When Mays was inducted into the Baseball Hall of Fame, he was asked who was the best player he’d seen in the game. He replied, “I don’t mean to be bashful, but I was.”

54. Andy’s TV son : OPIE
Ron Howard sure has come a long way since playing Opie on “The Andy Griffith Show”. He has directed some fabulous movies, including favorites of mine like “Apollo 13”, “A Beautiful Mind” and “The Da Vinci Code”. And today, Opie is a grandfather …

55. Scott in 1857 news : DRED
Famously, the slave Dred Scott was unsuccessful in suing for his freedom in St. Louis, Missouri in 1857.

59. Holy Trinity part : SON
In the Christian tradition, the Father, Son and Holy Spirit are three persons in One Divine Being, the Holy Trinity.

60. ___ generis : SUI
“Sui generis” is a Latin expression meaning “of its own kind”. The term can be used in a number of fields, and in philosophy it refers to an idea which cannot be included in a wider concept, and idea of its own kind.