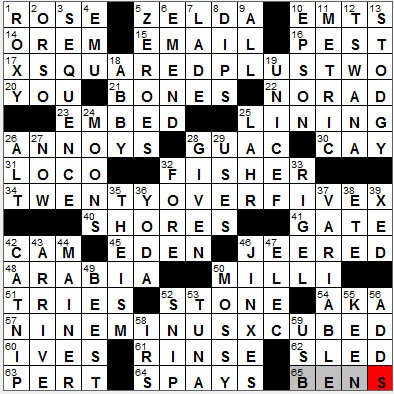 CROSSWORD SETTER: Parker Lewis
THEME: SEQUENCES with VARIABLES … each theme answer is the formula that defines the sequence of numbers in its clue:

5. Princess in a Nintendo game series : ZELDA
“The Legend of Zelda” is a video game. Apparently it’s very successful.

14. So-called Family City U.S.A. : OREM
Orem, Utah was originally known as “Sharon” (a Biblical name), then “Provo Bench”, and in 1914 it was given the family name of a local railroad operator, “Orem”. Orem gave itself the nickname “Family City USA” and, backing up that claim, in 2010 “Forbes” rated it the 5th best place in the country to raise a family.

22. Joint U.S./Canada military org. : NORAD
The North American Defense Command (NORAD) isn’t just a US operation, but is a cooperative arrangement between Canada and the United States. The two countries entered into an agreement to establish NORAD in 1958, mainly due to the concern that there would be little or no warning of a missile attack from the Soviet Union that came over the North Pole.

23. Journalist on a mission? : EMBED
Although journalists have been directly reporting from the front lines in military conflicts for some time, the term “embedded journalism” only came into fashion during the 2003 Invasion of Iraq. A formal arrangement was made between the US Military and hundreds of reporters allowing the journalists to travel with military units and, under pre-ordained conditions, report directly from those units. Some say that the arrangement was mutually beneficial. On the one hand the journalists had relatively little to worry about in terms of transportation and travel through combat zones. On the other hand, the military had better control over what did and did not get reported.

30. Small, low island : CAY
A “key” (also “cay”) is a low island offshore, as in the Florida Keys for example. Our term in English comes from the Spanish “cayo” meaning “shoal, reef”.

41. Part of a slalom run : GATE
Slalom is an anglicized version of the Norwegian word “slalam”, meaning “skiing race”.

45. Setting for Genesis 2:8-25 : EDEN
According to the Book Of Genesis, Adam and Eve lived in a garden “in” Eden, with Eden being geographically located by reference to four rivers, including the Tigris and the Euphrates. Some scholars hypothesize that Eden was located in Mesopotamia, which encompasses much of modern-day Iraq.

48. Aladdin’s home : ARABIA
“Aladdin” is a famous tale in the “Arabian Nights”, also called “The Book of One Thousand and One Nights”. However, there is no evidence at all that the story was in the original collection. It is generally believed that one Antoine Galland introduced the tale when he translated the “Arabian Nights” into French in the early 1700s.

50. Pop’s ___ Vanilli : MILLI
Milli Vanilli famously won a Grammy and had it revoked when it was discovered that they didn’t even provide the lead vocals for the award-winning recording, and just lip-synced when performing on stage.

60. First major publisher of board games in the U.S. : IVES
W. & S. B. Ives was publishing board games back in the 1830s, from its headquarters in Salem, Massachusetts.

62. Vehicle for Calvin and Hobbes : SLED
The comic strip “Calvin and Hobbes” is still widely syndicated, even though it hasn’t been written since 1995. The cartoonist Bill Watterson named the character Calvin after John Calvin, the 16th century theologian. Hobbes was named for Thomas Hobbes a 17th century English political philosopher.

65. Uncle ___ : BEN’S
Uncle Ben’s is the famous brand name of rice introduced in 1943. It was the biggest selling rice in the US from the fifties through the nineties. As one might imagine, the name “Uncle Ben” is pretty offensive, and Mars, who owns the brand now, have tried to distance themselves from the African-American slave/domestic servant image. In 2007 there was a TV campaign showing “Uncle Ben” as Chairman of the Board of the company. But, he is still called Uncle Ben …

Down
1. Classic theater name : ROXY
The original Roxy Theater was opened in 1927 in New York City, designed to be the biggest best “motion picture palace” of the day. To manage the theater, the owners hired the very experienced Samuel Rothafel. As part of the deal to entice Rothafel to take the job, the owners offered to name the theater after him, and as his nickname was “Roxy”, that’s the name that was used.

4. Bird whose name is a Midwest school’s initials : EMU
The emu has had a tough time in Australia since man settled there. There was even an “Emu War” in Western Australia in 1932 when migrating emus competed with livestock for water and food. Soldiers were sent in and used machine guns in an unsuccessful attempt to drive off the emus. The emus were clever, and broke their usual formation and adopted guerrilla tactics, operating as small units. After 50 days of “war”, the military withdrew. Subsequent requests for military help for the farmers were ignored. The emus had won …

7. Put on : LADE
The verb “lade” meaning “to load” comes from an Old English word “hladan”. Lade also used to mean “to draw water” and indeed gave us our word “ladle”. So, lade and ladle, are close cousins.

8. Uncool sorts : DIPS
“Dip” is a slang word used to call someone stupid or eccentric. I simply do not like that word …

10. Printer brand : EPSON
Seiko Epson is a Japanese company, one of the largest manufacturers of printers in the world. The company has its roots in the watch business, roots that go back to 1942. Seiko was chosen as the official time keeper for the 1964 Summer Olympics in Tokyo and was asked to supply a timer that produced a printed record. This request brought Seiko into the business of printer production. The company developed the world’s first miniprinter and called it EP-101 (EP standing for Electronic Printer). In 1975 Seiko introduced the next generation of EP printers, and they called it EPSON, “SON of EP”. Cute, huh?

12. A language of South Africa : TSWANA
Tswana is a language from South Africa. The Tswana word for “fly” is well known around the world, It’s “tsetse”.

24. Hindsights? : MOONS
The first recorded mooning incident took place in 66 AD, during the First Roman-Jewish War. Roman soldiers decided to moon Jewish pilgrims as they traveled to the Jewish Temple in Jerusalem.

25. “The Wizard Of Oz” co-star : LAHR
Bert Lahr’s most famous role was that of the cowardly lion in “The Wizard of Oz”. Lahr had a long career in burlesque, vaudeville and on Broadway. Remember the catchphrase made famous by the cartoon character Snagglepuss, “Heavens to Murgatroyd!”? Snagglepuss stole that line from a 1944 movie called, “Meet the People” in which it was first uttered by none other than Bert Lahr.

36. Speaker of “Luke, when gone am I, the last of the Jedi will you be” : YODA
Yoda is one of the most beloved characters of the “Star Wars” series of films. Yoda’s voice was provided by the great modern-day puppeteer Frank Oz of “Muppets” fame.

38. Common French word with two accents : ETE
One might spend the summer (été) on the River Seine in Paris.

42. Cause of feline friskiness : CATNIP
About 50% of all cats are affected in some way by the plant catnip. There is a terpenoid in the oil of the plant called nepetalactone that the cat inhales and that can cause anything from drowsiness to anxiety.

44. Down East native : MAINER
The coast of Maine is often referred to as “Down East” by the people of New England.

46. Some spellings? : JINXES
A jinx is a charm or a spell, and the word “jinx” comes from an older word “jyng” from the 17th century. A “jyng” was another word for the wryneck, a type of bird much used in witchcraft.

47. Monopoly util. : ELEC
The commercial game of Monopoly is supposedly a remake of “The Landlord’s Game” created in 1903 by a Quaker woman called Lizzie Phillips who used it as a tool to explain the single tax theory of American economist Henry George. The Landlord’s Game was first produced commercially in 1924. The incredibly successful derivative game called Monopoly was introduced in 1933 by Charles Darrow, and he became quite a rich man when Parker Brothers bought the rights to the game just two years later in 1935.

49. Ending with wilde- or harte- : BEEST
A gnu is also known as a wildebeest, an antelope native to Africa. Wildebeest is actually the Dutch word for “wild beast”.

The hartebeest is a grassland antelope found in West, East and Southern Africa. “hartebeest” comes from the Afrikaans word “hertebeest” meaning “deer”.

55. Gung-ho : KEEN
“Kung ho” is a Chinese expression meaning “work together, cooperate”. The anglicized version “gung ho” was adopted by a Major Evans Carlson as an expression of combined spirit for his 2nd Marine Raider Battalion during WWII. From there it spread throughout the Marine Corps and back to America where it persists to this day.

58. Form letters? : IRS
The Internal Revenue Service (IRS) came into being during the Civil War, to raise money to pay for war expenses. Prior to the introduction of income tax in 1862, taxation was limited to levies on trade and property.

59. Kind of port : USB
Universal Serial Bus (USB) is an industry standard dealing with how computers and electronic devices connect, and communicate and deal with electrical power through those connections.