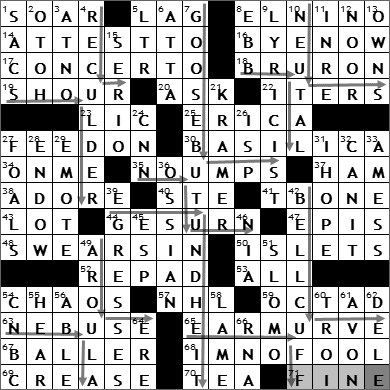 CROSSWORD SETTER: Caleb Rasmussen
THEME: NO U-TURN (violated!) … there are 12 answers that make TURNS within the grid, and each of the turns is at the letter U:


Today’s Wiki-est, Amazonian Googlies
Across
8. Cause of weather extremes : EL NINO
When the surface temperature of the Pacific Ocean rises or falls more that half a degree centigrade, then there is said to be an El Niño episode. That small temperature change in the Pacific has been associated with climatic changes that can stretch right across the globe. El Niño is Spanish for “the boy” and is a reference to the Christ child. It was given this Spanish name because the warming is usually noticed near South America and around Christmas-time.

17. Piece for orchestra and soloist : CONCERTO
Most commonly a concerto is a musical work composed of three movements, and is written for a solo instrument accompanied by an orchestra.

20. ___.com (Google competitor) : ASK
Ask.com is a search engine structured so that queries are made in the form of questions, with search results returned as answers. And, by the way, Ask.com is known as Ask Jeeves over in the UK. Cute …

25. Author Jong : ERICA
The author Erica Jong’s most famous work is her first, “Fear of Flying” published in 1973.

30. Sight from St. Peter’s Square : BASILICA
The Basilica of St. Peter in Rome was built during the late Renaissance and has the largest interior of any Christian church in the world, capable of holding 60,000 people. There is a popular misconception that St. Peter’s is the cathedral of Rome, but actually it isn’t, and instead is a papal basilica. The Basilica of St. John Lateran is the cathedral church of Rome.

37. Mugger? : HAM
The word “ham”, describing a performer who overacts, is apparently a shortened form of “hamfatter” and dates back to the late 1800s. “Hamfatter” comes from a song in old minstrel shows called “The Ham-Fat Man”. It seems that a poorly performing actor was deemed to have the “acting” qualities of a minstrel done up in black-face.

43. Nephew of Abraham : LOT
Lot is a character appearing in the Book of Genesis. At one point Lot had to flee the doomed city of Sodom with his wife. God gave instructions that the couple should not look back as they left the city, but Lot’s wife disobeyed and she was turned into a pillar of salt.

44. It’s a blessing : GESU-NDHEIT
“Gesundheit” is the German word for “health”, and is used in response to a sneeze in Germany, as indeed it is here in the US.

54. “Art is the triumph over ___”: John Cheever : CHAOS
John Cheever was a very well-respected author, mainly of short stories. He won the Pulitzer Prize for Fiction in 1979.

59. One’s pawns on a chessboard, e.g. : OCTAD
It is believed that the game of chess originated in northwest India, evolving from a 6th-century game called “caturanga”, a Sanskrit word meaning “four divisions”. These four (military) divisions were represented in the game:

63. Birthplace of many stars : NEBU-LA
In astronomical terms a nebula is a cloud of dust and ionized gases (“nebula” is the Latin for “cloud”). Many nebulae form as gases collapse in on themselves under the influence of enormous gravitational forces. Ultimately these collapses can result in the creation of new stars.

68. Jiminy Cricket declaration : I’M NO FOOL
In the original novel “Pinocchio” by Carlo Collodi, there is a talking cricket, a relatively minor character. Walt Disney gave his cricket a much larger role, and the name “Jiminy”, in his big screen adaptation of the story released in 1940.

Down
2. Internet shortening to introduce a different view : OTOH
On The Other Hand.

3. 6, for C : AT NO
The chemical element carbon has the atomic symbol “C” and the atomic number of 6.

5. Paper size: Abbr. : LTR
Like so many things, our paper sizes here in North America don’t conform with the standards in the rest of the world. ISO standard sizes used elsewhere have some logic behind them, in that the ratio of width to length is usually one to the square root of two. This mathematical relationship means that when you cut a piece of paper in two, each half preserves the aspect ratio of the original, which can be useful in making reduced or enlarged copies of documents. Our standard sizes of “letter” (8.5 x 11 inches) was determined in 1980 by the Reagan administration to be the official paper size for the US government. Prior to this, the “legal” size (8.5 x 14 inches) had been set as the standard, in 1921.

7. Result of being left out in the cold : GOOSEBU-MPS
The term “goosebumps” comes from the fact that skin which is cold can look like the flesh of a plucked goose.

10. Transmitter, of sorts : NEU-RON
A nerve cell is more correctly called a neuron, and the long nerve fiber that is part of the neuron is called the axon.

12. Koh-i-___, once the world’s largest known diamond : NOOR
The Koh-i-Noor Diamond was once the largest known diamond in the world, and is part of the British Crown Jewels. It is huge, weighing in at 105 carats. The Koh-i-Noor was found in India and was owned by Indian royal families for centuries. It was presented to Queen Victoria in 1850 during the days of the British Raj.

15. Prefix with comic : SERIO-
Something described as “seriocomic” has both serious and comical elements, but generally the comic side predominates.

21. 1990s TV neighbor : KRAMER
Cosmo Kramer is the outrageous character played by Michael Richards on “Seinfeld”. “Seinfeld” co-creator, Larry David, introduced Kramer into the story, basing the character on real-life comedian Kenny Kramer who used to live across the hall from him.

24. “American Morning” airer : CNN
“American Morning” is CNN’s flagship morning show. It tries to differentiate itself from the competition by avoiding much of the banal “chat” between the news presenters, focusing more on the stories themselves.

An Internet Service Provider (ISP) is just what its name indicates, a company that provides its customers with access to the Internet. One way that ISPs differentiate themselves from each other is in the way that the end users are connected to the ISPs network. So, there are cable ISPs, DSL ISPs, dial-up ISPs and satellite ISPs. I’d go with cable if I were you, if it’s available in your area …

36. Legendary Gaelic bard : OSSIAN
Scottish poet James Macpherson produced a series of poems, published in 1760, that he claimed were translations of ancient poems related by Ossian, a hero of Irish and Scottish folklore. The authenticity of the translations is still debated.

42. Statistical shape : BELL CU-RVE
A “bell curve” shape in a graph is more correctly known as a Gaussian function. The frequency with which many phenomena occur falls into a bell curve shape.

6. Vardalos of “My Big Fat Greek Wedding” : NIA
Not only was the delightful Nia Vardalos the star of the 2002 hit movie “My Big Fat Greek Wedding”, she also wrote the screenplay. The film never made it to number one at the box office, but it still pulled in more money than any other movie in history not to make it to number one. That record I think reflects that the film wasn’t a blockbuster but rather a so-called “sleeper hit”, a movie that people went to see based on referrals from friends. The big fat mistake came when a spin-off TV show was launched, “My Big Fat Greek Life”. It ran for only 7 episodes.

54. “Mad Money” airer : CNBC
“Mad Money” started airing in 2005, and is hosted by the ebullient Jim Cramer. Cramer recommends essential funds, such as those reserved for retirement, be safely locked away in conservative investment vehicles. Any money left over (still looking for that here!) is classed as “Mad Money” and can be invested in more risky stocks.

60. “Star Trek: T.N.G.” counselor Deanna : TROI
Deanna Troi, the character on “Star Trek: The Next Generation”, is played by the lovely Marina Sirtis. Sirtis is a naturalized American citizen and has what I would call a soft, American accent on the show. However, she was born in the East End of London and has a natural accent off-stage that is more like that of a true Cockney.

61. “Thou soft-flowing” stream of literature : AVON
“Thou Soft Flowing Avon” is a song composed by Thomas Arne with lyrics by David Garrick. It was written for, and first performed at, the jubilee celebration for William Shakespeare in Stratford-upon-Avon in 1769.

66. Genetic material : RNA
Ribonucleic Acid (RNA) is an essential catalyst in the manufacture of proteins in the body. The genetic code in DNA determines the sequence of amino acids that make up each protein. Amino acids are delivered in the correct sequence by what is called transfer RNA and then formed into proteins by ribosomal RNA.