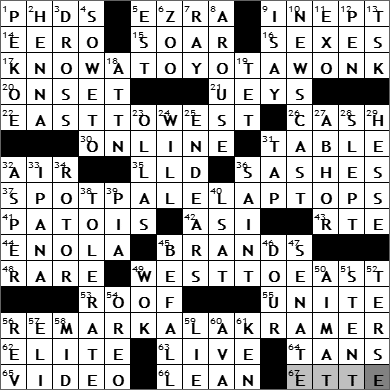 CROSSWORD SETTER: Peter A. Collins
THEME: EAST TO WEST or WEST TO EAST … all of the theme answers are palindromes, and so can be read in either direction:


Today’s Wiki-est, Amazonian Googlies
Across
1. Degrees of excellence? : PHDS
PhD is an abbreviation for “philosphiae doctor”, Latin for “teacher of philosophy”.

5. Book that begins “Now in the first year of Cyrus king of Persia …” : EZRA
In the Hebrew Bible the Book of Ezra was originally combined with the Book of Nehemiah, with the two being separated in the early days of the Christian Era.

14. Architect Saarinen : EERO
Eero Saarinen was a Finnish American architect, renowned in this country for his unique designs for public buildings such as Gateway Arch in St. Louis, Dulles International Airport Terminal, and the TWA building at JFK.

17. Rub elbows with an expert on some Japanese cars? : KNOW A TOYOTA WONK
A “wonk” is an overly studious person. It is an American slang term that has been around at least since 1954.

One of my favorite words is “Aibophobia”, although it doesn’t appear in the dictionary and is a joke term. It is a great way to describe a fear of palindromes, by creating a palindrome out of the suffix “-phobia”. I would call it a “real” word though in one sense, as it has was introduced first in 1981 by all accounts, and has been around ever since.

26. Johnny with a guitar : CASH
I must admit I am not a big country music fan, but who doesn’t love Johnny Cash? The man had such a unique voice, and indeed unique songs. I think that his biopic, “Walk the Line”, is very cool, as is the title song itself. Recorded back in 1956, “Walk the Line” is relatively creative for “popular” music. The basic rhythm of the song emulates the sound of a freight train, the “boom-chicka-boom” sound. Cash’s guitar has a unique tone to it, as it plays this rhythm, achieved by threading a piece of paper between the guitar strings giving the rhythm a bit of a “buzz”. Above the rhythm line, each of the five verses is sung in different keys. You can actually hear Cash hum a note signifying the key change at the start of each verse. With all these modulations, the final verse is sung a full octave lower that the first. A remarkable tune …

31. Put on the back burner : TABLE
These “tabling” and “shelving” idioms drive me crazy, because it is always misused. If a topic is shelved, it is set aside. If a topic is tabled, it is brought “off the shelf” and put “on the table” for discussion. But, maybe it’s just me …

35. Honorary law degree: Abbr. : LLD
The honorary degree of Legum Doctor (LL.D.) translates from the Latin as Doctor of Laws, a plural. This practice of using the plural originated in Cambridge University in England, as one was awarded an LL.D. after having been taught both Canon Law and Civil Law.

37. Notice light-colored MacBooks? : SPOT PALE LAPTOPS
The MacBook is Apple’s current line of notebook computers, introduced in 2006 to replace both the iBook and the PowerBook.

41. Local dialect : PATOIS
“Patois” is a word that we imported from French, in which language it also means “native or local speech”.

42. “___ Lay Dying” : AS I
“As I Lay Dying” is a novel by William Faulkner first published in 1930. The book has an unusual structure, with stream of consciousness writing throughout. There is one whole chapter that I’d like to quote here

43. A.A.A. suggestion : RTE
The American Automobile Association is a not-for-profit organization, focused on lobbying, provision of automobile servicing, and selling of automobile insurance. It was founded in 1902 in Chicago, and published the first of its celebrated hotel guides back in 1917.

56. Comment like a “Seinfeld” character? : REMARK A LA KRAMER
Cosmo Kramer is the outrageous character played by Michael Richards on “Seinfeld”. “Seinfeld” co-creator, Larry David, introduced Kramer into the story, basing the character on real-life comedian Kenny Kramer who used to live across the hall from him.

65. Hulu offering : VIDEO
Hulu.com is a website providing streaming video of full television shows. It is a joint venture of NBC and Disney, and so features a lot of their content. The service is free and is supported by advertising, but you can sign up for a premium subscription and get access to more shows. A lot of younger folks seem to use it a lot …

Down
2. Decorative tattoo dye : HENNA
Henna has been used for centuries as a dye, not just for leather and wool, but also for the hair and skin. In modern days, henna is used for the temporary tattoos.

3. Smelting byproduct : DROSS
When metals are smelted, there is a scum made up of impurities that floats on the surface of the molten metal. This scum is called “dross” and is drawn off and discarded. The term dross then came to mean any waste or impure matter.

4. Johannesburg township : SOWETO
Soweto is an urban area in the city of Johannesburg, South Africa. The name comes from SOuth WEstern TOwnship, a black township that was set up the days of apartheid South Africa. The famous Soweto Uprising took place in 1976, triggered by government policy forcing education in Afrikaans rather than English.

7. Gamma follower : RAY
Gamma radiation was first discovered by the French chemist Paul Villard, as he studied radiation coming from the chemical element radium. This radiation was called “gamma”, the third letter in the Greek alphabet, as alpha and beta particles had already been identified.

12. “The tongue of the mind,” per Cervantes : PEN
The full name of the author of “Don Quixote” was Miguel de Cervantes Saavedra. As a young man in 1570, Cervantes was a soldier fighting for the Spanish Navy, stationed in Naples, at that time a possession of Spain. He was injured in battle, receiving three gunshot wounds including two to the chest. His injuries left him without the use of his left arm. After recuperating, he returned to active service, and in 1575 he was captured by Algerian corsairs, and spent the next five years in slavery in North Africa. His parents found him and bought his freedom, and brought him home to his native Madrid.

29. “Steppenwolf” author : HESSE
Hermann Hesse was not only a novelist, but also a poet and a painter. His best known work is probably his 1927 novel “Steppenwolf”.

33. Colgate competitor, once : IPANA
Ipana toothpaste was introduced in 1915, and was at the height of its popularity in the forties and fifties, with sales declining in the sixties and withdrawal from the US market in the seventies. Bucky the Beaver was the “spokesman” for Ipana. Bucky Beaver’s slogan was “Brusha… Brusha… Brusha. Get the New Ipana – it’s dandy for your teeth!”

36. Martin or Louis : SAINT
The island of Saint Martin is in the Caribbean. If one wants to write the island’s name in French, then the spelling doesn’t change, but there is a hyphen placed between the two words: Saint-Martin.

The city of Saint Louis, Missouri was founded by French explorers in 1763. Sitting on the Mississippi River it grew into a very busy port, and by the 1850s was the second busiest in the country, with only New York moving more freight.

39. Singer/actress Zadora : PIA
Pia Zadora is an American actress and singer. Her most famous role was in the 1982 film “Butterfly” in which she worked with Orson Welles and Stacey Keach. The film was based on the novel “The Butterfly” by James M. Cain, and deals with the difficult subject of father-daughter incest.

49. Stir-fry pan : WOK
Wok is a Cantonese word, the name of the frying pan now used in many Asian cuisines.

51. Artery implant : STENT
In the world of medicine and surgery, a stent is an artificial tube inserted inside a vessel in the body, say an artery, so that it reduces the effects of a local restriction in the body’s conduit.

52. Like Hemingway’s prose : TERSE
Ernest Hemingway moved around a lot. He was born in Illinois and after leaving school headed to the Italian front during WWI. There he served as an ambulance driver, an experience he used as inspiration for “A Farewell to Arms”. He returned to the US after being seriously wounded, but a few years later moved to Paris where he worked as a foreign correspondent. He covered the Spanish War as a journalist, from Spain, using this experience for “For Whom the Bell Tolls”. During the thirties and forties he had two permanent residences, one in Key West, Florida, and one in Cuba. In the late fifties he moved to Ketchum, Idaho, where he committed suicide in 1961.

54. Twistable treat : OREO
The Oreo was the biggest selling cookie in the 20th century, and almost 500 billion of them have been produced since they were introduced in 1912 by Nabisco. In those early days the creme filling was made with pork fat, but today vegetable oils are used instead. If you take a bite out of an Oreo sold outside of America you might notice a difference from the homegrown cookie, as coconut oil is added to give a different taste.

56. Al Sharpton, e.g.: Abbr. : REV
The Reverend Al Sharpton is a high-profile Baptist minister and civil rights activist, with his own radio talk show. Sharpton preached his first sermon when he was only 4-years-old.

60. Actress Gardner : AVA
Ava Gardner is noted for her association with some big movies, but also for her association with some big names when it came to the men in her life. In the world of film, she appeared in the likes of “Mogambo” (1953), “On the Beach” (1959), “The Night of the Iguana” (1964) and “Earthquake” (1974). The men in her life included husbands Mickey Rooney, Artie Shaw and Frank Sinatra. After her marriages had failed (and perhaps before!) she had long term relationships with Howard Hughes and bullfighter Luis Miguel Dominguin whom she met through her friend Ernest Hemingway.

61. Burns behind a camera : KEN
Ken Burns directs and produces epic documentary films that usually make inventive use of archive footage. His most recent works are the sensational “The War” (about the US in WWII) and the magnificent “The National Parks: America’s Best Idea”.