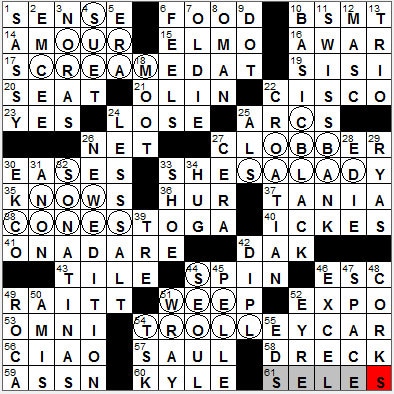 6. ___ pyramid, four examples of which are seen in this puzzle : FOOD
The first food guide pyramid was issued in 1974, in Sweden. The food pyramid that we’re most familiar with in this country is the one published by the USDA in 1992, which was replaced in 2011. Instead of a pyramid, we now have a guide called MyPlate. MyPlate urges us to eat about 30% grains, 30% vegetables, 20% fruits, 20% proteins on our plates, accompanied by a small serving of dairy.

Back in 1966, the Carnegie Institute allocated money to study the use of television to help young children prepare for school. They gave an $8million grant to set up the Children’s Television Workshop with the task of creating an educational TV program for children. The program began to come together, especially after Jim Henson (of Muppet fame) got involved. The name “Sesame Street” was chosen simply because it was the “least disliked” of all names proposed just before the program was to air.

20. Fanny : SEAT
You have to be careful using the slang term “fanny” if traveling in the British Isles, because over there it has a much ruder meaning …

21. Lena who played Irina Derevko on “Alias” : OLIN
Lena Olin is a Swedish actress, discovered by Ingmar Bergman. Her most famous performance was in the movie “Chocolat” released in 2000, and then she won an Emmy in 2003 for Best Supporting actress for her performances in the TV show “Alias”.

22. Tech company in the Dow Jones Industrial Average : CISCO
Cisco is a company that I really admire. Headquartered in San Jose, California, Cisco develops and sells products and services in the communications sector. The name “Cisco” was taken from the name of the city, San Francisco.

26. Lepidopterist’s tool : NET
A lepidopterist is a person who studies butterflies and moths, a name coming from Lepidoptera, the order of insects that encompasses such flying insects. “Lepidoptera” comes from the Greek words for “scale” and “wing”.

30. Tailors’ allowances : EASES
In the worlds of tailoring and dressmaking, a “sewing ease” is the difference between a particular body measurement (say a hip or waist) and the measurement of the garment itself.

33. 1971 Tom Jones hit : SHE’S A LADY
Tom Jones, now he has a real voice, and is a great showman. I saw him in Las Vegas many, many moons ago, one of the best Vegas shows I’ve ever attended. Although Tom Jones is a carefully selected stage name (he was born Thomas Woodward) the name isn’t too far from reality as Jones is his mother’s maiden name. The stage name was chosen by his manager to capitalize on the appeal of “Tom Jones”, a filmed version of the Henry Fielding novel that was having a successful run at the time. The name also emphasized Tom’s Welsh roots.

36. Ben-___ : HUR
The celebrated Charlton Heston movie “Ben-Hur” was a dramatization of a book published in 1880 by Lew Wallace titled “Ben-Hur: A Tale of Christ”. The 1959 epic film won a record 11 Academy Awards, a feat that has been equaled since then but has never beaten. The other winners of 11 Oscars are “Titanic” and “The Lord of the Rings: The Return of the Rings”.

37. Patty Hearst alias : TANIA
Famously, Patty Hearst joined forces with her 1974 kidnappers, the Symbionese Liberation Army. At the same time she took on an assumed name, Tania. Patty Hearst spent almost two years in jail for her illegal activities with the group but was released when her sentence was commuted by President Carter. President Clinton’s last official act before leaving office was to grant Patty Hearst a pardon.

38. Pioneer carrier : CONESTOGA
A Conestoga is a large, covered wagon that was used in many of the wagon trains that crossed North America in the late 1700s and early 1800s. The name was taken from the Conestoga Valley near Lancaster, Pennsylvania, where the design was developed. The Conestoga wagon resembled a boat on wheels, and often the gaps between the planks were caulked so that it would float when crossing water.

46. PC key : ESC
The escape key was originally used to control computer peripherals. It was a key that allowed the computer operator to stop what the peripheral was doing (cancel a print job, for example). Nowadays the escape key is used for all sorts of other things, especially in gaming programs.

49. John who starred in Broadway’s original “Carousel” : RAITT
John Raitt was an actor and singer best known for his roles in Broadway musicals such as “Carousel”, “Oklahoma!” and “The Pajama Game”.

56. Foreign farewell : CIAO
“Ciao” is the Italian for “bye”. “Arrivederci” is more formal, and translates better as “goodbye”.

57. Old Testament king : SAUL
According to the Hebrew Bible, Saul was the first King of Israel, and ruled from 1049 BC to 1007 BC. Saul’s story is mainly recounted in the Books of Samuel.

58. Shoddy stuff : DRECK
“Dreck” is filth or trash, a word that comes into English from “drek”, the Yiddish word for rubbish.

59. Part of N.C.A.A.: Abbr. : ASSN
The National Collegiate Athletic Association (NCAA) dates back to the Presidency of Theodore Roosevelt. When President Roosevelt’s son broke his nose playing football at Harvard, Roosevelt turned his attention to the number of serious injuries and even deaths occurring in college sports. He instigated meetings between the major educational institutions, leading to the formation of the Intercollegiate Athletic Association of the United States (IAAUS) in 1906 with the remit of regulating college sports. The IAAUS evolved into the NCAA in 1910.

61. Tennis great born in Serbia : SELES
Monica Seles has a Hungarian name as she was born to Hungarian parents in former Yugoslavia. She was the World No. 1 professional tennis player in 1991 and 1992 before being forced from the sport when she was stabbed by a German spectator at a match in 1993. She did return to the game two years later, but never achieved the same level of success.

Down
1. Fresh : SASSY
“Sass”, meaning “impudence”, is a back formation from the word “sassy”. “Sassy” is an alteration of the word “saucy”, with “sassy” first appearing in English in the 1830s.

3. Ephron and Roberts : NORAS
Nora Ephron has many talents, including writing film scripts and novels. Many of the movies that she writes, she also directs. These would include some of my favorite movies of all time like “Sleepless in Seattle”, “You’ve Got Mail” and most recently, the wonderful “Julie & Julia”. And, did you know that Nora Ephron’s second marriage was to journalist Carl Bernstein of Watergate fame?

Nora Roberts is a very successful author who has written over 165 romance novels. She writes under a number of pen names: J.D. Robb, Jill March and Sarah Hardesty.

4. Ingredient in some English pudding : SUET
Fat, when extracted from the carcass of an animal, is called “suet”. Untreated suet decomposes at room temperature quite easily, so it has to be “rendered” or purified to make it stable. Rendered fat from pigs is what we call “lard”. Rendered beef or mutton fat is known as “tallow”.

8. Gulf of ___ : OMAN
The Gulf of Oman isn’t actually a gulf, and rather is a strait, connecting the Arabian Sea to the Strait of Hormuz and onto the Persian Gulf.

11. Site of many clandestine accounts : SWISS BANK
Switzerland has a tradition of banking secrecy that dates back to the Middle Ages. All bank accounts are linked to individuals, just as they are in the rest of the world, but the identity of that individual is protected by laws of privacy. The protections afforded are similar to the confidentiality between a lawyer and a client. Bank secrecy can be overturned however, by a judge’s “lifting order”.

13. Charlie’s Angels, e.g. : TRIO
When the TV show “Charlie’s Angels” started airing in the mid-seventies it was a little unusual in that it featured three women playing private detectives, a role usually reserved for men. The name first chosen for the show was “The Alley Cats”, then “Harry’s Angels”, before finally settling on “Charlies Angels”.

22. Like many a Malkovich : CROATIAN
After WWII, Croatia was part of Yugoslavia and remained so until 1991 when it declared independence as the troubled country of Yugoslavia began to split into disparate parts.

25. Lou Gehrig’s disease, for short : ALS
Lou Gehrig was known as a powerhouse. He was a big hitter and just kept on playing. He broke the record for the most consecutive number of games played, and he stills holds the record for the most career grand slams. His durability earned him the nickname “The Iron Horse”. Sadly, he died in 1941 at 37-years-old suffering from amyotrophic lateral sclerosis (ALS), an illness we now call “Lou Gehrig’s Disease”.

27. Michael of “Superbad” : CERA
Michael Cera is a Canadian actor, a very talented young man who is riding high right now. He played great characters in the TV show “Arrested Development”, and the 2007 comedy-drama “Juno”. More recently he played the title role in “Scott Pilgrim vs. the World”.

29. Scandinavian rugs : RYAS
A rya is a traditional Scandinavian rug, originally used as heavy covers by mariners as an alternative to furs. The name “rya” comes from a village in southwest Sweden.

31. Presently : ANON
“Anon” originally meant “at once”, and evolved into today’s meaning of “soon”, apparently just because it was misused over time.

32. Light classical pieces : SONATINAS
A cantata is a piece of music that is sung, as opposed to a sonata, which is a piece that is played on some instrument, often a piano. A sonatina is in effect a sonata that has been labelled as something lighter and shorter.

34. O, symbolically : HUG
In the sequence XOXOX, I think the X represents a kiss, and the O a hug. Hugs and kisses …

44. City whose name sounds like a fish : SEOUL
The largest metropolitan area in the world is centered on Tokyo, Japan. Seoul, South Korea comes in second with a population of over 20 million people.

48. Blush stoppers : CORKS
The term “blush” in the world of wine has only been around since the late seventies, and is really only used here in the US. Today we think of a blush as a relatively sweet pink wine, and a rosé as something drier.

50. “The Pregnant Widow” author Martin : AMIS
I suppose the successful English novelist Martin Amis must have writing in his blood. He is the son of the respected author Kingsley Amis, a Booker Prize winner.

51. “King Kong” co-star, 1933 : WRAY
What a classic movie “King Kong” is, starring Fay Wray as the young woman that Kong falls for. Apparently Wray was very interested in the role in which she was told she would be playing opposite the “tallest, darkest leading man in Hollywood”. She thought it might be Clark Gable. Boy was she wrong …

52. Heroine who says “I resisted all the way: a new thing for me” : EYRE
“Jane Eyre” is of course the novel written by Charlotte Bronte under the pen name Currer Bell. Over the years, I’ve shared here on the blog that the storyline is a little too dark and Gothic for my taste, but a very persuasive blog reader convinced me to look more at the romantic side of the story and give it a second chance. I watched a wonderful 4-hour television adaptation of the novel made by the BBC very recently, and I have to say that because I focused on the relationship between Jane and Rochester, I was able to push past the Gothic influences (that depress me) so I really enjoyed the performance. I thoroughly recommend this 2006 BBC adaptation to fans of the novel.