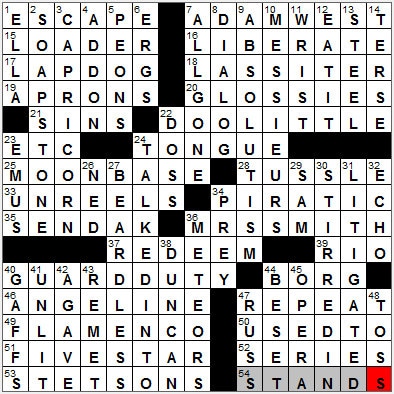 1. Actual title of the 1979 #1 hit known as “The Piña Colada Song” : ESCAPE
Rupert Holmes released “Escape” in 1979, and over the airways the song was very popular and oft-requested by listeners. Record sales were surprisingly low though, given the good reception. Someone realised that the name was a little deceptive, with many folks not realizing that “Escape” was indeed the “The Piña Colada Song”. The record was re-titled “Escape (The Piña Colada Song)”, and it shot to number one. By the way, when Holmes originally wrote the song, instead of the lyric “if you like Piña Colada”, he used “if you like Humphrey Bogart”. Nah, doesn’t quite work …

7. “Family Guy” mayor, or the actor providing his voice : ADAM WEST
Adam West is the actor who played the title role in the sixties TV series “Batman”. These days you might hear him as the voice of a character called “Adam West” on the animated show “Family Guy”. Back in 1970, West was offered the role of James Bond in the movie “Diamonds are Forever”, but he turned it down!

18. 1984 film starring Tom Selleck as a jewel thief : LASSITER
Back in the mid-eighties, Tom Selleck was riding high playing the title role in the television show “Magnum P.I.” In order to cash in on Selleck’s popularity at the time, he was cast alongside Jane Seymour in a jewel-heist movie called “Lassiter”. The plot sounds great actually, but the reviews were terrible.

22. Higgins’s pupil in elocution : DOOLITTLE
Eliza Doolittle is Professor Henry Higgins’s speech student in George Bernard Shaw’s “Pygmalion”. “Pygmalion” was of course adapted by Lerner and Loewe to become the Broadway musical “My Fair Lady”. The musical spun off the wonderful 1964 film of the same name, starring Audrey Hepburn and Rex Harrison.

23. Abbr. rarely seen at the start of a sentence : ETC
Et alii (et al.) is the equivalent of et cetera (etc.), with et cetera being used in place of a list of objects, and et alii used for a list of names.

35. “In the Night Kitchen” author : SENDAK
Maurice Sendak is an American writer and illustrator of children’s books. His best known work is “Where the Wild Things Are”, published in 1963. The “Wild Things” of the tale are beasts conjured up in the imagination of a young boy after he is sent to bed with no supper. Sendak also wrote a children’s picture book called “In the Night Kitchen”, first published in 1971. This publication is usually regarded as controversial here in the US, as the young boy in the story strips naked in the tale to avoid dirtying his clothes, and he is shown naked in the illustrations. As a result, “In the Night Kitchen” is on many lists of banned books, despite being a Caldecott Honor recipient in 1971.

36. Lady famous for piemaking : MRS SMITH
The company known as Mrs. Smith’s Pies was founded by Amanda Smith and her son in the 1920s to take advantage of increasing demand for her own fruit pies that she sold at a local YMCA lunch counter in Pottstown, Pennsylvania.

39. Vegas hotel that hosts the World Series of Poker : RIO
The Rio casino in Las Vegas was opened in 1990, originally targeting the local population as it is located off the famous Strip where most of the tourists hang out. Famously, the Rio opened up the adults-only Sapphire Pool in 2008, a pay-to-enter (only men paid) topless pool club that featured music and dancers. A year later the Sapphire Pool was closed down after there were eleven arrests for drugs and prostitution offences during an undercover police operation.

49. Foot-stomping music : FLAMENCO
Flamenco is a style of Spanish music and dance. The origin of the word “flamenco” isn’t clearly understood, but the explanation that seems most credible to me is that it comes from Flanders in Northern Europe. Given that “flamenco” is the Spanish word for “Flemish” and Flanders is home to the Flemish people it makes perfect sense, doesn’t it?

53. Wild West show headgear : STETSONS
Stetson is a brand name of hat, manufactured by John B. Stetson Company of St. Joseph, Missouri. The so called “cowboy hat” that Stetson pioneered was such a success for the company that it became the largest hat maker in the world, producing over 3.3 million hats per year.

1. “___ in Berlin” (1960 live album) : ELLA
Ella Fitzgerald, the “First Lady of Song”, had a hard and tough upbringing. She was raised by her mother alone in Yonkers, New York. Ella’s mother died while she was still a schoolgirl, and around that time young Ella became less interested in her education. She fell in with a bad crowd, even working as a lookout for a bordello and as a Mafia numbers runner. She ended up in reform school, from which she escaped, and found herself homeless and living on the streets for a while. Somehow she managed to get herself a spot singing in the Apollo Theater in Harlem. From there her career took off, and as the say, the rest is history.

2. Mineral used as chalk by tailors : SOAPSTONE
The metamorphic rock known as soapstone or steatite has a myriad of uses, largely because it is relatively soft. It even feels quite soapy to the touch, hence the name “soapstone”. It’s used for making counter tops, or as a medium for artistic and decorative carving. It’s also used by tailors as a marking tool on cloth.

5. Unskilled laborers : PEONS
A peon is a lowly worker with no real control over his/her working conditions. The word comes into English from Spanish where it has the same meaning.

6. Newton-meter fractions : ERGS
An erg is a unit of energy or mechanical work. “Erg” comes from the Greek word “ergon” meaning “work”. A dyne is a unit of force. The name “dyne” comes from the Greek “dynamis” meaning “power, force”. Ergs and dynes are related to each other in that one erg is the amount of energy need to move a force of one dyne over a distance of one centimeter.

9. Moral theory that doesn’t allow for shades of gray : ABSOLUTISM
Moral absolutism is the view that actions can be defined as either right or wrong, and as such, wrongful actions can never be justified under any circumstances. For example, someone who considers violence to be absolutely wrong could not justify the use of violence even in self-defense.

10. Old-fashioned letter opener : MESSIEURS
The abbreviation “Messrs.” is used at the head of a list of male names, in place of “Misters”. It is an abbreviation of the French “messieurs”, the plural of “monsieur”.

12. Weird Al Yankovic’s first Billboard hit : EAT IT
“Eat It” was a big hit for Weird Al Yankovic, and is a parody of the bigger Michael Jackson hit, “Beat It”. For reasons of copyright, Yankovic had to present the lyrics of the parody to Michael Jackson, and was pleasantly surprised to see that Jackson found it amusing and gave permission for the project to proceed. In Australia, “Eat It” actually got to number one in the charts, while “Beat It” only made it to number three!

22. Sleep, in British slang : DOSS
“Doss” is a slang word used in the UK for “sleep”. What we’d call a flophouse here in the US, an establishment offering a bed for the night and little else, is called a doss-house on the other side of the Atlantic.

23. Skinny-legged trotters : EMUS
The emu has had a tough time in Australia since man settled there. There was even an “Emu War” in Western Australia in 1932 when migrating emus competed with livestock for water and food. Soldiers were sent in and used machine guns in an unsuccessful attempt to drive off the emus. The emus were clever, breaking their usual formation and adopting guerrilla tactics, and operated as smaller units. After 50 days of “war”, the military withdrew. Subsequent requests for military help for the farmers were ignored. The emus had emerged victorious …

26. Outlaw Kelly of Australian legend : NED
Ned Kelly was an Irish-Australian outlaw, regarded by many as a symbol of resistance against the British ruling class in Australia in the 19th century. There have been two famous films made of his life story. “The Story of the Kelly Gang” was released in 1906, and is recognized today as the first feature film ever made. We might be more familiar with the film called “Ned Kelly” released in 1970, as it starred Mick Jagger in the title role.

27. Like Lincoln before his presidency : BEARDLESS
The story is that just before Abraham Lincoln was elected president in 1860, he received a letter from a 12-year-old girl, criticizing his appearance and his pock-marked, gaunt face. The little girl, Grace Bedell from New York, promised to get her brothers to vote for Lincoln if he would just grow a beard. Lincoln waited until after the election to grow his famous whiskers, a look that would forever be associated with his presidency.

29. 1950s-’70s senator Ervin : SAM
San Ervin was a Democratic Senator from North Carolina, serving from 1954 until 1974. Senator Ervin worked on two notable committees during his term. He helped bring down Senator Joseph McCarthy in 1954, and he helped investigate the Watergate scandal that brought down President Richard Nixon.

32. Return a call? : ECHO
In Greek mythology, Echo is one of the Oreads, the mountain nymphs. She fell in love with the vain Narcissus, and followed him into the forest one day. Narcissus heard her following him, and called out, “Who’s there?”. Echo answered, “Who’s there?” Again he called out, and again Echo echoed his words back to him. Get the gist?

38. Company behind the 1960s yo-yo craze : DUNCAN
Would you believe that the first yo-yos date back to 500 BC? There is even an ancient Greek vase painting that shows a young man playing with a yo-yo. Centuries later Filipinos were using yo-yos as hunting tools in the 1500s. The word “yo-yo” is a Tagalog (Filipino) word meaning “come-come” or simply “return”.

40. Fishing hooks : GAFFS
A gaff is that dangerous-looking metal hook on the end of a pole that fishermen use to drag large fish into their boats.

42. Mesoamerican plant : AGAVE
Mesoamerica is a region extending from Central Mexico, south to Costa Rica. It is known as an area where societies flourished prior to the Spanish colonization of the Americas in the 16th and 17th centuries.

45. “No good ___ plot can be sensible …”: W. H. Auden : OPERA
The noted poet W. H. Auden was born and raised in England, but eventually became a US citizen. As well as hundreds of poems, Auden also wrote librettos for operas, including Igor Stravinsky’s “The Rake’s Progress”.

47. Former Wisconsin senator Feingold : RUSS
Russ Feingold is a former US Senator for the state of Wisconsin. A Democrat, Feingold is perhaps best known for his work with Republican Senator John McCain that resulted in the Bipartisan Campaign Reform Act of 2002, usually called the McCain-Feingold Act.