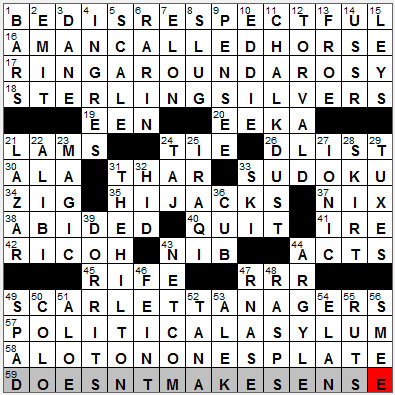 16. 1970 film with much Sioux dialogue : A MAN CALLED HORSE
The 1970 film “A Man Called Horse” was based on a short story of the same name by Dorothy M. Johnson. Before being made into a movie, the story was also adapted as a 1958 episode of the TV show “Wagon Train”.

17. Game that kids fall for : RING-AROUND-A-ROSY
We played a game we called “Ring-a-Ring-a-Rosy” in the school yard when we were kids. Although it has never been proven, we always associated the words of the rhyme with the Great Plague of 1665 in England. There was a “rosy” rash around the bodies of the afflicted, hence “ring-a-ring-a-rosy”.

18. They often need polishing : STERLING SILVERS
Pure silver is too soft for use in production of the likes of knives and forks or salvers. So, it is converted into an alloy with a second metal, usually copper. The designation “sterling” is reserved for alloys containing 92.5% silver.

20. Reggae artist ___-Mouse : EEK-A
Eek-A-Mouse is a Jamaican reggae artist, born Ripton Hylton. Hylton took the name “Eek-A-Mouse” from a racehorse, one on which he frequently bet.

21. Fugitives’ flights : LAMS
To be “on the lam” is to be in flight, to have escaped from prison. It is American slang that originated at the end of the 19th century. The word “lam” also means to “beat” or “thrash”, as in “lambaste”. So “on the lam” might derive from the phrase “to beat it, to scram”.

37. Word often pig-Latinized : NIX
Ixnay is a word in Pig Latin. Pig Latin is in effect a game, whereby one takes the first consonant of an English word and moves it to the end of the word, and then adds the letters “ay”. So the Pig Latin for the word “nix” is “ix-n-ay” … ixnay.

42. Digital camera maker : RICOH
Ricoh is a Japanese company that started out in 1936, and by the year 2000 was the biggest manufacturer of copiers in the world. The company is also well known as a supplier of cameras.

43. Penpoint : NIB
“Nib” is a Scottish variant of the Old English word “neb”, with both meaning the beak of a bird. This usage of “nib” as a beak dates back to the 14th century, with “nib” meaning the tip of a pin or quill coming a little later, in the early 1600s.

49. Some firebirds : SCARLET TANAGERS
The Scarlet Tanager is a beautiful-looking bird, truly scarlet in color other than its wings and tail. It is in the cardinal family.

4. Artist with a self-named museum in Montauban, France : INGRES
Jean August Dominique Ingres was a French painter, most famous for his portrait work.

7. University near Burlington : ELON
Elon is a city in the Piedmont region of North Carolina, close to the city of Burlington. Elon University is a private, liberal arts school, founded in 1889.

9. Thought about the Louvre? : PENSEE
“Une pensée” is French for “a thought”.

12. Nora’s husband in “A Doll’s House” : TORVALD
“A Doll’s House” is probably the most famous play by Norwegian playwright Henrik Ibsen. The play deals with the feminist awakening of the lead character, Nora Helmer, and is sometimes referred to as the “first true feminist play”.

13. Wood-cleaving tool : FROE
A froe is an L-shaped tool used with a mallet to split timber along the grain.

14. Amer. ally in W.W. II : USSR
WWII started with Germany’s invasion of Poland in 1939. A few days later, the USSR did the same thing, moving across Poland so that the country was divided with the USSR and Germany entering into a Treaty of Friendship later that year. In 1941, Germany made a surprise attack on the Soviet Union, leading to the USSR entering into an alliance with the UK. By the time the US formally entered the war after the attack on Pearl Harbor, the deal was already done, and the US and USSR were allies.

15. Simon who wrote “The Death of Napoleon” : LEYS
Simon Leys is the pen-name of the Belgian writer Pierre Ryckmans.

21. Talent agent Swifty : LAZAR
Swifty was the nickname of talent agent Irving Paul Lazar. He mainly represented authors and movie stars, including Humphrey Bogart. When Lazar pulled off three major deals for Bogart in just one day, his client gave Lazar the name “Swifty”, and it stuck.

22. Out for a trial : ALIBI
“Alibi” is the Latin word for “elsewhere”, as in I claim that I was “elsewhere” when the crime was committed … I have an “alibi”.

23. Potter’s field? : MAGIC
J. K. Rowling is the author of the amazingly successful Harry Potter series of books. Rowling wrote the first book when she was living on welfare in Edinburgh in Scotland, and in longhand. She would often write in local cafes, largely because she needed to get her baby daughter out of the house (she was a single mom), and the youngster would tend to fall asleep on walks. Within five years, the single mom on welfare became a very rich woman, and is now worth about $1 billion!

Joanne Rowling changed her name to J. K. Rowling at the request of her publisher, who believed that young boys might have shied away from reading the first “Harry Potter” book if they believed the story was written by a woman (this was 1997!). “Jo” Rowling chose J for Joanne, and K for Kathleen after her grandmother (Jo had no middle name to use).

24. ___ Mahal : TAJ
The most famous mausoleum in the world has to be the Taj Mahal in Agra, India. The Taj Mahal was built after the death of the third wife of Shah Jahan, Mumtaz Mahal (hence the name of the mausoleum). The poor woman died in childbirth, delivering the couple’s 14th child!

25. Like some dinars : IRAQI
The Dinar is the official currency in many countries, such as Iraq and Bahrain. The Gold Dinar dates back to the early days of Islam, with the name deriving from the Roman currency called “denarius” meaning “ten times” (as it was originally a coin worth ten asses).

27. Counterpart of covalent : IONIC
In the world of chemistry, an ionic bond is formed between two oppositely-charged ions, like that between positively-charged sodium atoms and negatively-charged chlorine atoms to form table salt (NaCl). A covalent bond, on the other hand, is formed when two atoms share electrons, making each of the sharing atoms more stable, so they prefer to stay together rather than apart.

29. They often come with vests : TUXES
The style of men’s evening dress called a “tuxedo” was apparently first worn to a country club event in 1886 in New York. The use of a dark dinner jacket, without tails, became fashionable at the club with the members, and the tradition spread from there. The country club was located in Tuxedo Park, New York, giving the style of dress its name.

39. Family in a Dickens novel : DORRITS
“Little Dorrit” is a novel by Charles Dickens, a satirical work that takes potshots at the government and society of the day.

43. Former AOL competitor : NETCOM
Netcom was an Internet Service Provider based in San Jose, California, that I used for many years.

47. Pancreatic enzyme : RNASE
RNase is short for Ribonuclease. In general, enzyme names usually end with the suffix -ase, with the prefix indicating what the enzyme acts on. In this case, RNase is an enzyme that breaks down RNA, an important clean up operation in cells, removing RNA that is no longer needed.

49. Fokker foe : SPAD
The Société Pour L’Aviation et ses Dérivés (SPAD) was a French aircraft manufacturer in the early part of the 20th century. They built the SPAD S.XIII biplane, a very popular aircraft in WWII.

Fokker was a Dutch aircraft manufacturer, founded by Anthony Fokker in 1912 in Germany, moving to the Netherlands in 1919. I’ve flown quite a few Fokker passenger planes in my life, but not many in recent years as the company went bankrupt in 1996.

51. Hyacinth relative : ALOE
Aloe vera has a number of alternate names that are descriptive of its efficacy as a medicine. These include the First Aid plant, Wand of Heaven, Silent Healer and Miracle Plant.

52. Lake ___ (Blue Nile source) : TANA
Lake Tana is the largest lake in Ethiopia, and is the source of the Blue Nile. The lake has a number of islands of significant size, many of which are home to ancient monasteries.

53. Film director Keshishian : ALEK
Alek Keshishian is a Lebanese-born Armenian film director. His most famous movie is a documentary, “Madonna: Truth or Dare” released in 1991. The movie documents the life of the singer Madonna during her 1990 tour, and for a while was the highest-grossing documentary of all time.

54. Style : ELAN
Our word “élan” was imported from French, in which language the word has a similar meaning, “style” or “flair”.

56. “Luff, you lubber” speaker of literature : SMEE
In J. M. Barrie’s play and novel about Peter Pan, Smee is one of Captain Hook’s pirates and is his right-hand man. He is described by Barrie as being “Irish” and “a man who stabbed without offence”. Nice guy!