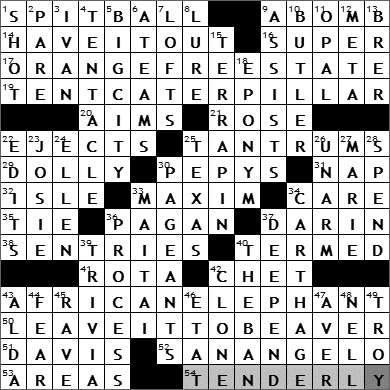 9. Cloud maker : A-BOMB
There are two classes of nuclear weapons, both of which get the energy for the explosion from nuclear reactions. The first nuclear bombs developed, called atomic bombs (A-bombs), use fission reactions. Uranium nuclei are split into smaller nuclei with the release of an awful lot of energy in the process. The second class of nuclear weapons are fusion bombs. These devices are called thermonuclear weapons or hydrogen bombs (H-bombs). In a fusion reaction, the nuclei of hydrogen isotopes are fused together to form bigger nuclei, with the release of even greater amounts of energy.

17. Political entity of 1854-1900 : ORANGE FREE STATE
The Orange Free State was formed by the Boers in southern Africa in middle of the 19th century. The republic took its name from the Orange River.

21. One with big hips, maybe : ROSE
The fruit of the rose plant is known as the rose hip or rose haw. I remember drinking rose hip syrup when I was a kid.

29. What keeps a camera rolling? : DOLLY
Apparently a dolly, a small platform on rollers especially on a movie set, is called a dolly because it’s supposed to look like a doll. No, it doesn’t. I don’t believe it …

30. Old English recorder : PEPYS
Samuel Pepys was a British Member of Parliament and naval administrator, more famous these days for his diary than for his contribution to political history. Pepys started to keep a diary on New Year’s Day in 1660 and recorded his daily life for almost ten years. His writings include details of his personal life as well as firsthand accounts of the important events of the 1660s such as the Great Plague of 1665 and the Great Fire of London in 1666.

36. Like the ancient Greeks : PAGAN
A pagan is someone who holds religious beliefs that are different from the main religions of the world. In classical Latin “paganus” was a villager, a rustic.

37. “Beyond the Sea” singer : DARIN
The pop classic “Beyond the Sea”, most famously recorded by Bobby Darin, was originally a French composition called “La Mer” (The Sea), with completely different lyrics.

41. Membership list : ROTA
“Rota”, meaning a roster of names, isn’t a word I hear much in the US, to be honest, but we used it all the time in Ireland.

42. Jazz trumpeter Baker : CHET
The famous jazz trumpeter Chet Baker was noted for his heroin addiction, a problem that nearly put an end to his performing career. He managed a comeback in the late seventies, mainly appearing and recording in Europe. But he never kicked the drug habit, and was found dead one day after falling from his hotel room window in Amsterdam.

50. Popular June program? : LEAVE IT TO BEAVER
We used to see a lot of American television programming growing up in Ireland, but “Leave It to Beaver” was one show that didn’t make it across the Atlantic. I’ve seen a couple of episodes, and I am not sure it would travel well. The show went on the air for the first time the day that Sputnik was launched by the Russians, and aired its last show just a few months before President Kennedy was assassinated. An iconic series, by all accounts.

51. Mid 19th-century president : DAVIS
The Confederate States of America set up government in 1861 just before Abraham Lincoln took office. Jefferson Davis was selected as President of the CSA at its formation and retained the post for the life of the government.

54. 1950s million-selling song that begins “The evening breeze caressed the trees …” : TENDERLY
“Tenderly” is a popular classic published in 1946. The best-known version was recorded by Rosemary Clooney in 1952.

Down
3. Tolstoy character ___ Ilyich : IVAN
“The Death of Ivan Ilyich” is a novella by Leo Tolstoy.

11. Flame Queen ___ (famous gemstone) : OPAL
The Flame Queen Opal is the world’s most famous opal gemstone. It was mined in New South Wales in 1914, discovered by three partners who sold it for just 93 pounds.

13. Southern contraction : BR’ER
Br’er Rabbit and Br’er Fox are characters in the Uncle Remus stories, written by Joel Chandler Harris. His stories are adaptations of African American folk tales that he collected across the South. The “Br’er” of course stands for “brother”.

15. Swampland swimmer : TERRAPIN
The terrapin is a species of turtle found in swamps in the east and south of the United States.

18. Rob Roy or Shirley Temple : EPONYM
An eponym is a name derived from the name of a person.

Rob Roy’s full name was Robert Roy McGregor, itself an Anglicization of the Scottish Raibeart Ruadh. He gave his name to the famous cocktail, a relative of the Manhattan, made with Scotch instead of bourbon.

The original drink called a Shirley Temple was made with two parts ginger ale, one part orange juice and a dash of grenadine. The contemporary drink is much simpler, a mix of 7up (or equivalent) with grenadine. A variant of the non-alcoholic original that includes some form of booze is often called a “Dirty Shirley”.

25. Short-lived republic founded in 1836 : TEXAS
The single star on the state flag of Texas is a reminder of the “lone star” on the 1836 National Standard of Texas. The single gold star on a blue background symbolized Texas as an independent republic, and symbolized the struggle for independence from Mexico.

27. Madame Tussaud’s first name : MARIE
Marie Tussaud was a wax sculptor from France. Some of her early work was very gruesome as she lived through the French Revolution. She would take the decapitated heads of executed citizens and use them to make death masks which were then paraded through the streets. She eventually moved to London, taking with her a vast collection of wax models made by her and her father. She opened a museum to display the works, and the Madame Tussaud’s wax museum is a major attraction in the city to this day.

33. Cocktail often made with pineapple juice : MAI TAI
The Mai Tai cocktail is strongly associated with the Polynesian islands, but it was supposedly invented in 1944 in Trader Vic’s restaurant in Oakland, California. One recipe is 6 parts white rum, 3 parts orange curaçao, 3 parts Orgeat syrup, 1 part rock candy syrup, 2 parts fresh lime juice, all mixed with ice, and then a float of 6 parts dark rum.

39. Game show fodder : TRIVIA
Trivia are things of little consequence. “Trivia” is the plural of the Latin word “trivium” which means “a place where three roads meet”. Now that’s what I call a trivial fact …

40. Oedipus, for one : THEBAN
Oedipus was a mythical king of the city-state of Thebes. Before he was born, his father was warned by a seer that if he sired a son, the boy would kill him and marry his wife, the boy’s own mother. When Oedipus was born, he fulfilled that prophecy. Sigmund Freud used the name Oedipus (in the Oedipus complex) to describe what he termed a male child’s unconscious desire for exclusive attention from his mother.

43. Alan who won an Emmy for his role on “The West Wing” : ALDA
Alan Alda had a great television career, but when it comes to the big screen my favorite of his movies is the 1978 romantic comedy “Same Time, Next Year” in which he starred opposite Ellen Burstyn.

44. “That little darkroom where negatives are developed,” per Michael Pritchard : FEAR
Michael Pritchard is a noted motivational speaker, who started out his career as a stand-up comic. He is known in particular for his work with children.

46. Conseil d’___ (French government body) : ETAT
The Conseil d’État (Council of State) is a body within the French national government. It provides legal advice to the Prime Minister and is also the administrative court of last resort.

49. Where Patroclus met his end : TROY
In Greek mythology, Patroclus was a dear friend of Achilles, and his comrade-in-arms. When Achilles and Patroclus died, their bones were mingled together so that the two could be as one in death as they had been in life.