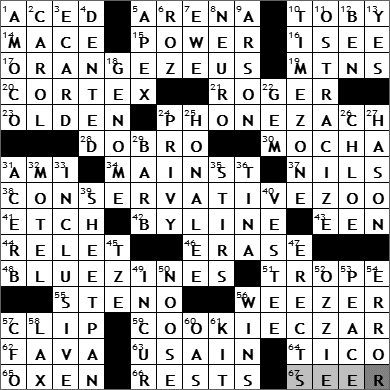 CROSSWORD SETTER: Joon Pahk
THEME: JZ Sounds … each of the theme answers is a well-known term that includes a “J” sound, but with the “J” changed to a “Z” sound:

COMPLETION TIME: Did not finish!
ANSWERS I MISSED: Missed 4-5 answers in the southeast

William Shakespeare wrote his comedy “Twelfth Night” as a Christmas entertainment (Twelfth Night being the end of the Christmas season).

14. Trademarked spray : MACE
Mace is actually a brand name, originally introduced by Lake Erie Chemical when they started to manufacture “Chemical Mace”, with the name being a play on the club-like weapon from days of old. Mace was originally a form of tear gas, but Mace today uses a formula that is actually a pepper spray, a different formulation.

20. Outer layer of the cerebrum : CORTEX
The outermost layer of an organ is known as the cortex. The cortical layer that is most familiar to the man on the street (like me!) is that of the brain, the cerebral cortex.

21. “Gotcha” : ROGER
The term “roger”, meaning “yes” or “acknowledged”, comes from the world of radio-telephony. The British military used a phonetic alphabet in the fifties that included Roger to represent the letter “R”. As such, it became customary to say “Roger” when acknowledging a message, with R (Roger) standing for “received”.

24. “Galifianakis wants you to call him back”? : PHONE ZACH (phone jack)
Zach Galifianakis is a stand-up comedian who is making a name for himself on the big screen. He garnered a lot of attention for his role in 2009’s “The Hangover”, and also starred opposite Robert Downey Jr. in the 2010 release “Due Date”.

28. Twangy-sounding guitar : DOBRO
“Dobro” is now used as a generic term for a resonator guitar, and was originally a brand name. A resonator guitar is an acoustic design, with a metal cone replacing the traditional wooden sound board.

30. Java flavor : MOCHA
Café mocha is usually made using one third espresso coffee and two thirds steamed milk, with a little chocolate added. The drink is named after the town of Mocha in Yemen, a noted exporter of coffee as far back as the 15th century.

41. Do as Dürer did : ETCH
Albrecht Dürer was a German artist, noted for his etchings and engravings as well as for his paintings.

43. “I should ___ die with pity, / To see another thus”: King Lear : E’EN
Shakespeare was inspired to write his famous drama “King Lear” by the legend of “Leir of Britain”, the story of a mythological Celtic king.

51. Figurative device : TROPE
A trope is a figure of speech, from the Greek word “tropos” with the same meaning.

55. Dictator’s underling : STENO
Stenography is the process of writing in shorthand. The term comes from the Greek “steno” (narrow) and “graphe” (writing).

The musical genre of “emo” originated in Washington D.C. in the 80s, and takes its name from “emotional hardcore”. Not my cup of tea …

59. Famous Amos, e.g.? : COOKIE CZAR (cookie jar)
Wally Amos was a talent agent, who was in the habit of taking home-baked cookies with him as an enticement to get celebrities to meet with him. He was urged by friends to open a cookie store (the cookies were that good, I guess) and this he did in Los Angeles in 1975 using the name “Famous Amos”. The store was a smash hit, and he was able build on the success by introducing his cookies into supermarkets. The brand was eventually bought up, making Wally a rich man, and Famous Amos cookies are still flying off the shelf.

62. Falafel bean : FAVA
Falafel is a fried ball of ground chickpeas or fava beans served in pita bread. I love chickpeas, but falafel just seems too dry to me.

63. Lightning Bolt : USAIN
Usain Bolt is a Jamaican sprinter who in the 2008 Olympics won three gold medals. Back in Jamaica, Bolt was big into cricket and probably would have been a very successful fast bowler had he not hit the track instead.

Unlike many nicknames for people of a particular country, the name “Kiwi” for a New Zealander isn’t offensive at all. The term comes from the flightless bird that is endemic to New Zealand and is the country’s national symbol. Kiwi is a Maori word, and the plural (when referring to the bird) is simply “kiwi”. However, when you have two or more New Zealanders with you, they are Kiwis (note the “s”, and indeed the capital “K”!).

67. Tiresias, e.g., in Greek myth : SEER
Tiresias of Thebes was a blind prophet of Greek mythology. He was noted for his seven-year transformation into a woman.

Down
1. Brand with a torch in its logo : AMOCO
Amoco is an abbreviation for the American Oil Company. Amoco was the first oil company to introduce gasoline tanker trucks and drive-through filling stations. I wonder did they know what they were starting?

6. Cartoonist Chast : ROZ
Roz Chast had her first cartoon published in “The New Yorker” in 1978, and has had more than 800 published since then.

7. Dolly, for one : EWE
Dolly is the most famous sheep in the world. She was born in 1996 near Edinburgh in Scotland, grown from a cell taken from the mammary gland of a healthy donor sheep. When asked why she was called Dolly, the scientist responsible said, and I quote:

10. China has only one : TIME ZONE
Local solar time was replaced with standard time zones with the increasing use of rail travel and telecommunications, as the variations in local solar times became very inconvenient. Time zones in the US vary in hourly increments, but in some parts of the world a 30-minute or even 15-minute difference can apply. On the other hand, in the vast country of China there is only one time zone.

11. Freeze out : OSTRACIZE
The practice of ostracism, freezing out or exclusion, dates back to Ancient Greece. Back then citizens could write the names of men they thought were sufficiently dangerous on tiles that were publicly posted, resulting in a banishment of ten years. “Ostracize” derives from the Greek “ostrakon”, the word for a “tile”.

12. Bernanke of the Fed : BEN
Ben Bernanke has been Chairman of the Federal Reserve since 2006, appointed by President George W. Bush. Bernanke and his wife have a 30-year fixed rate mortgage with a rate of just over 5%, and one car, a Ford Focus. Modest enough …

18. High-tech map subject : GENOME
The genome of an organism is all the hereditary information needed to reproduce that organism, in other words, all of its chromosomes. When scientists unravel the human genome it takes up an awful lot of computer storage space, and yet all of this information is in almost every cell in our bodies. Every cell “knows” how to make a whole human being.

25. Magical land : HONALEE
In the song “Puff the Magic Dragon”, made famous by Peter, Paul and Mary, Puff lives in the fictional land of Honalee.

26. Tech-savvy “24” woman : CHLOE
One of the few characters in the television show “24” that wasn’t killed off was Chloe O’Brien, the abrasive computer scientist played by Mary Lynn Rajskub. IN the real world, the Department of Homeland Security has a development program aimed at protecting airliners from missile attacks. It is called Project CHLOE, after the character on “24”. Apparently the show was a favorite of former Homeland Security Secretary Michael Chertoff.

32. “Psycho” setting : MOTEL
Bates Motel and house were constructed on the backlot of Universal Studios for the 1960 movie “Psycho”. They are still standing, and for me are the highlight of the backlot tour that is available to visitors.

36. Brown of Newsweek/The Daily Beast : TINA
Tina Brown is a British journalist, best known in America as author of “The Diana Chronicles”, a biography of Diana, Princess of Wales, of whom Brown was a personal friend. Brown has turned her attention to this side of the Atlantic, and is working on a book about Hillary and Bill Clinton.

40. Decorative neckline insert : VESTEE
A vestee is an insert under a sweater or a jacket, designed to look like a blouse.

45. Philosopher Mo-___ : TZE
Mozi (also Mo-Tze) was a Chinese philosopher whose positions were often in coflict with Confucianism.

52. Smith in Cooperstown : OZZIE
Ozzie Smith is a former professional shortstop. He played for the San Diego Padres and the St. Louis Cardinals.

53. What two fingers may signify : PEACE
The V-sign, made with the palm facing outwards, was used as a victory sign by Winston Churchill during WWII. He was careful to point his palm outwards, as the V-sign made with the palm inwards has a very rude meaning in Britain and Ireland. The same victory sign was adopted as a peace sign in protests against the Vietnam War, a usage that spread and persists to this day.

57. Head of cabbage?: Abbr. : CFO
The Chief Financial Officer is in charge of the money in a business, the “cabbage”.

60. Western treaty grp. : OAS
The Organization of American States (OAS) has its headquarters in Washington, D.C. All the independent states in the Americas are members of the group (except Honduras, suspended after the 2009 coup in that country).