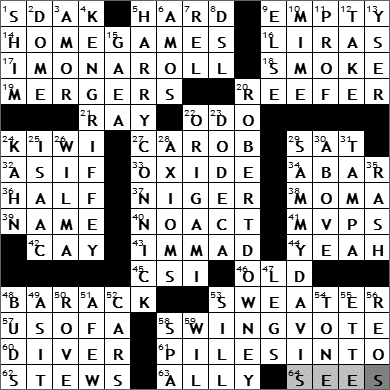 CROSSWORD SETTER: Joel Fagliano
THEME: Jr … the black squares spell out the letters JR, and all the theme answers are celebrities who are “Juniors”, who use the abbreviation “Jr” in their names:


Today’s Wiki-est, Amazonian Googlies
Across
1. It’s bisected by the Missouri R. : S DAK
The state of South Dakota is bisected north to south by the Missouri River. One half of the state is known as East River and the other West River, and each has a contrasting history and geography. Most of the state’s residents live east of the river, having settled in that part of South Dakota known for its fertile soil. As a result, East river’s economy has historically been associated with agriculture, and the farming of corn and wheat. West River’s economy has been dependent on ranching and mining.

16. Bygone coins : LIRAS
The name “lira” is used in a number of countries for currency. It comes from the Latin word for a pound, and is derived from a British pound sterling, the value of a Troy pound of silver. The lira was the currency of choice in Italy before the change was made to the euro.

18. Camel, e.g. : SMOKE
The advertising mascot for Camel cigarettes was officially known as “Old Joe”, but was popularly known as “Joe Camel”. Joe originated in the seventies, in an advertising campaign that ran only in Europe where he sometimes was depicted wearing a French Foreign Legion cap. He was imported to the US in 1988 on the occasion of the 75th anniversary of the Camel brand. The big controversy surrounding the use of the camel character was that a 1991 study found that 5-6 year old children could recognize Joe Camel more readily than either Mickey Mouse or Fred Flintstone. Also, soon after Old Joe was introduced in the US, the Camel brand’s share of the illegal market to underage smokers went up from 1% to just under 33%.

20. One getting hit on at a party? : REEFER
Marijuana cigarettes have been known as “reefers” since the twenties. It is thought that the term comes from either the Mexican Spanish for a drug addict, “grifo”, or from its resemblance to a rolled sail i.e. a sail that has been “reefed”.

22. “Deep Space Nine” role : ODO
Odo is a character in the “Star Trek” spin-off “Deep Space Nine”. He is the chief of security on the space station and is a Changeling, meaning that he can assume any shape that he wishes. Odo is played by René Auberjonois, an actor you might remember as Father Mulcahy in the movie version of “M*A*S*H”.

27. Chocolate substitute : CAROB
The carob is a tree or shrub in the pea family, mainly grown for its seed pods. The carob seeds are dried or roasted, and when powdered or chipped make a good substitute for chocolate.

29. It has 10 sections : SAT
Today the standardized test for admission to colleges is known as the SAT Reasoning Test, but it used to be called the Scholastic Aptitude Test and Scholastic Assessment Test, which led to the acronym SAT.

37. Third-longest river in Africa : NIGER
The principal river in western Africa is the Niger, running 2,600 miles through the continent. The river is unusual in that has a boomerang shape, taking a sharp turn around the the ancient city of Timbuktu.

38. Home to van Gogh’s “The Starry Night,” in brief : MOMA
“The Starry Night” is a Van Gogh masterpiece depicting what the artist could see from the window of his room in a sanitarium near the village of Saint-Rémy-de-Provence. I am somewhat ashamed to note that one reason I know this painting so well is that I put together a 2,000-piece jigsaw puzzle last Christmas depicting “The Starry Night”.
40. “___ of kindness, however small, is wasted”: Aesop : NO ACT
Aesop lived in Ancient Greece, probably around the sixth century BC. Supposedly he was born a slave, somehow became a free man, but then met with a sorry end. He was sent to the city of Delphi on a diplomatic mission but insulted the Delphians instead. He was tried on a trumped-up charge of stealing from a temple, sentenced to death and was thrown off a cliff.

42. Islet : CAY
A key is a low island offshore (as in the Florida Keys), also known as a cay. Our term in English comes from the Spanish “cayo” meaning “shoal, reef”.

45. Series of grisly cases : CSI
The TV show “CSI” gets a lot of criticism from law enforcement agencies for its unrealistic portrayal of the procedures and science of criminal investigation. I don’t care though, as I just think it’s a fun television. The original “CSI” set in Las Vegas seems to have “gone off the boil” lately, but the addition of Sela Ward to the cast of “CSI: NY” has really, really raised the level of the sister show set in New York City.

48. Presidential first name : BARACK
President Obama’s first name, Barack, is Swahili with roots in an old Arabic word meaning “blessed”. Barack was the President’s father’s name. His middle name is Hussein, an Arabic word meaning “good” or “handsome one”. Hussein was the name of the President’s grandfather on the paternal side. His surname, Obama, doesn’t really have a translation, but is common among the Luo tribe of Kenya.

57. Old Glory’s land, for short : US OF A
The first person to coin the phrase “Old Glory” with reference to the American flag was Captain William Driver, a ship master from Salem, Massachusetts. As he was leaving on an 1831 voyage aboard the brig Charles Doggett, he unfurled the American flag that he had just been given by a group of friends. As the flag caught the breeze he uttered the words, “Old Glory!”. That’s the story anyway. By the way, on that same voyage, Captain Driver rescued the famous mutineers of the HMS Bounty, when he found them on Pitcairn Island.

3. Theme for Julio Iglesias : AMOR
The Spanish singer Julio Iglesias’s real name is Julio José Iglesias de la Cueva. He took up playing the guitar as a young man while recovering from a devastating car accident that injured his spinal cord. “Immediate” recovery took three years, but he still receives therapy for his weakened legs.

4. Baseball star : KEN GRIFFEY
Ken Griffey, Jr. is noted as a home run hitter as well as a defensive player. In fact, Griffey is tied for the record for the most consecutive games with a home run.

5. Jazz/pop singer : HARRY CONNICK
Harry Connick, Jr. is one of those singers that has made a successful move into the world of acting. He had a recurring role on the sitcom “Will & Grace” from 2002 to 2006, playing Grace’s husband Dr. Leo Markus. His first acting job was in the excellent 1990 movie “Memphis Belle”, in which he did a great job playing a tail gunner with a peppy sense of humor. He played a similar role in 1996’s “Independence Day”.

6. Book after Joel : AMOS
Amos is one of the twelve minor prophets in the Hebrew Bible.

7. First Amendment subj. : REL
The Constitution of the United States was adopted on September 17, 1787. There have been 27 amendments to the constitution, the first ten of which are collectively called the Bill of Rights. In essence the Bill of Rights limits the power of the Federal Government, and protects the rights of individuals. For example, the First Amendment states:

8. Verizon service : DSL
DSL originally stood for Digital Subscriber Loop, but is now accepted to mean (Asymmetric) Digital Subscriber Line. DSL is the technology that allows Internet service be delivered down the same telephone line as voice service, by separating the two into different frequency signals.

13. North Sea feeder : YSER
The Yser originates in northern France and flows though Belgium into the North Sea. The Yser name is oft associated with WWI as it figured in a major battle early in the conflict. In the first three months of the war the German Army pushed almost completely through Belgium, inflicting heavy losses on the Belgian Army as the defenders were forced to fight a fast-moving rearguard action. The Germans were intent on pushing right through Belgium, across France in a “race to the sea”. But the Belgians, with the help of its Allies, decided to make a final stand at the Yser Canal in an effort to prevent the Germans reaching the French ports of Calais and Dunkirk. The 22-mile long defensive line was chosen at the Yser because the river and canal system could be flooded to create a barrier that might be defended. The plan was successful, and the front was “stabilized”. As we now know, millions of lives were lost over the coming years with very little movement of that battle line.

20. Actor : ROBERT DOWNEY
Robert Downey, Jr. is the son of the actor and director Robert Downey, Sr. Young Robert’s first on-screen role was in a movie his father directed called “Pound”, released in 1970 when he was just 5-years-old.

24. Architect Louis : KAHN
Louis Kahn was a celebrated architect based in Philadelphia. Among his list of works is the Yale University Art Gallery and the First Unitarian Church in Rochester, New York.

25. Deep-voiced Hayes : ISAAC
Isaac Hayes was a soul singer and songwriter. Hayes wrote the score for the 1971 film “Shaft”, and the enduring “Theme from ‘Shaft'” won him an Academy Award in 1972.

26. TV mother of Pebbles : WILMA
Pebbles is the daughter of Fred and Wilma Flintstone from the cartoon series “The Flintstones”. Pebbles gets her name from her mother, whose maiden name is Pebble.

29. Singer/dancer/actor : SAMMY DAVIS
Sammy Davis, Jr. began his career in entertainment with his father, as they were two members of the vaudeville act, the Will Mastin Trio. The trio, Mastin and the two Davis men, took a break in 1943 while Davis, Jr. served in the US Army, but got back together to perform after the war. The three men remained very close for their whole lives, and their bodies are even buried side-by-side in the Davis family tomb.

52. Hit 2006 Disney-Pixar film : CARS
“Cars” is a 2006 animated feature from Pixar. The great cast of voice actors includes Paul Newman in his last movie role before he passed away in 2008.

56. Flying Cloud and Royale 8 : REOS
The REO Motor Company was founded by Ransom E. Olds (hence the name REO). The company made cars, trucks and buses, and was in business from 1905 to 1975 in Lansing, Michigan.

59. Actor Wheaton : WIL
Wil Wheaton is the actor who grew up playing Ensign Crusher on the best of the “Star Trek” TV series, “Star Trek: The Next Generation”. In recent years Wheaton has become a de facto spokesman for the so-called “geek” or “nerd” community via a weblog that he writes called “Wil Wheaton Dot Net“. He has been playing Dungeons & Dragons for years, and is also someone you’ll see at celebrity poker games on TV.