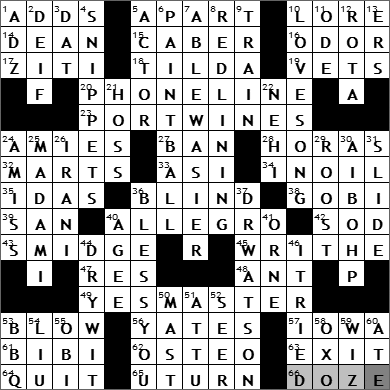 CROSSWORD SETTER: Jeff Chen
THEME: U-TURN … all the theme answers are palindromes. Each palindrome is a down answer that runs into a dead-end in a “U”. The answer is revealed by reading the down letters, then u-turning and adding the same letters read upwards:


Today’s Wiki-est, Amazonian Googlies
Across
15. Pole tossed in a Scottish competition : CABER
The caber toss must be the most recognizable event in the Scottish Highland Games. The tall pole is 19’ 6” long and weighs a whopping 175 pounds. The event may have originated with the practice of tossing large logs across chasms in order to cross them.

17. Pasta choice : ZITI
Cylindrical pasta is known in general as “penne”, and there are many variants. Ziti is a particularly large and long tube, with square-cut ends.

18. ___ Swinton, Oscar-winning actress for “Michael Clayton” : TILDA
Tilda Swinton is an English actress, quite famous in her native land. She made a big name for herself outside the UK when she played the “bad guy” in the 2007 movie “Michael Clayton”, opposite the “good guy” played by George Clooney.

23. Sweet beverages often served with dessert : PORT WINES
The city of Oporto in Portugal gave its name to port wine in the late 1600s, as it was the seaport through which most of the region’s fortified wine was exported.

28. Lively dances : HORAS
The hora is a circle dance that originated in the Balkans. It was brought to Israel by Romanian settlers, and is often performed to traditional, Israeli folk songs. The hora (also horah) is a regular sight at Jewish weddings.

35. Argonaut who slew Castor : IDAS
In Greek mythology, Idas was one of the Argonauts, noted for participating in the hunt for the Calydonian Boar. He also fought with the twins Castor and Pollux, causing the death of Castor, the mortal of the pair of brothers.

In Greek mythology, Leda was the beautiful Queen of Sparta who was seduced by Zeus, in the form of a swan. She produced two eggs from the union. One egg hatched into the beautiful Helen, later to be known as Helen of Troy over whom the Trojan War was fought. The other egg hatched into the twins Castor and Pollux. Castor and Pollux had different fathers in the myth. Pollux was the son of Zeus, so was immortal, while Castor was the son of Leda’s earthly husband, and was mortal.

38. Home to Mongolian nomads : GOBI
The large desert in Asia called the Gobi lies in northern China and southern Mongolia. The Gobi desert is growing at an alarming rate, particularly towards the south. This “desertification” is caused by increased human activities, and the Chinese government is actively trying to halt the desert’s progress by planting great swaths of new forests, the so called “Green Wall of China”.

39. Gabriel, for one : SAN
San Gabriel is a city in Los Angeles County. It takes its name from the Mission San Gabriel Arcángel, the fourth to be built of the twenty-one missions in California.

48. Amazon ___ : ANT
The Amazon ant is a remarkable creature. It has evolved to the extent that it can no longer care for its young or even provide for itself directly. What it can do is raid the nests of other ant species, stealing pupae and bringing them back to its own nest. When the pupae develop into maturity, the “enslaved” ants take care of the young Amazon ants and provide food for the whole colony.

49. Genie’s affirmative : YES, MASTER
The “genie” in the bottle takes his or her name from “djinn”. “Djinns” were various spirits considered lesser than angels, with people exhibiting unsavory characteristics  said to be possessed by djinn. When the book “The Thousand and One Nights” was translated into French, the word “djinn” was transformed into the existing word “génie”, because of the similarity in sound and the related spiritual meaning. This “génie” from the Arabian tale became confused with the Latin-derived  “genius”, a guardian spirit thought to be assigned to each person at birth. Purely as a result of that mistranslation the word genie has come to mean the “djinn” that pops out of the bottle. A little hard to follow, I know, but still quite interesting …

56. Eastwood’s “Rawhide” role : YATES
“Rawhide” was on the air from 1959-65. Of course the most famous cast member was Clint Eastwood who played Rowdy Yates. But the list of guest stars was also impressive. It included, Mary Astor, Frankie Avalon, Charles Bronson, and even Frankie Laine. Laine sang the theme song, which was composed by a Russian, Dimitri Tiomkin.

57. Home of Fort Dodge : IOWA
Fort Dodge, Iowa is named after the original fort built by soldiers in 1850, at the junction of the Des Moines River and Lizard Creek.

61. Nickname for Netanyahu : BIBI
Benjamin Netanyahu has been the Prime Minister of Israel since 2009, the only leader of the country who was born in the state of Israel.

1. Cutting tool : ADZ
An adze (also adz), while similar to an axe, is different in that the blade of an adze is set at right angles to the tool’s shaft. The blade of an axe is set in line with the shaft.

2. Lionized : DEIFIED
The term “lionize” dates back to the late 1700s when there were lions kept in the Tower of London. The lions were quite famous, and attracted many visitors. Hence the term “lionize” means to treat someone as a celebrity.

5. Astin or Martin : ACTOR
Astin might refer to Sean Astin, or perhaps John Astin. And the Martin could be one of dozens of actors with that family name.

John Astin is best known for playing Gomez, the head of the household on “The Addams Family” TV series.

6. Colorful sport : PAINTBALL
The “paint” in paintball isn’t actually paint, but rather a mix of gelatin and food coloring.

7. Phrase inspired by Napoleon : ABLE WAS I ERE I SAW ELBA
I had a lovely two-week vacation in Tuscany once, including what was supposed to be a two-night stay on the island of Elba. I had envisioned Elba as a place full of history, and maybe it is, but it is overrun with tourists who use it as a beach getaway. We left after one day and we won’t be going back …

8. Discriminatory insurance practice : REDLINING
The use of the term “redlining”, meaning to deny services to certain groups, first applied to the banking sector. The practice came to light when it was discovered that banks were refusing to invest in black, inner-city neighborhoods as a deliberate policy.

11. Wordsworth work : ODE
The great English poet William Wordsworth lived in the Lake District in the north of England, a beautiful part of the country. I’ve been fortunate enough to visit Dove Cottage in Grasmere a couple of times, where Wordsworth lived with his wife, Dorothy.

12. Kind of cuff : ROTATOR
What we know as the rotator cuff, is more correctly termed the rotor cuff. It is the group of four muscles that stabilizes the shoulder.

22. Beverage brand once sold “in all popular flavors” : NEHI
The “Nehi Corporation” was the nickname for the Chero-Cola/Union Bottle Works that introduced the Nehi drink in 1924. Years later, the company developed a new brand, Royal Crown Cola (also known as RC Cola). By 1955, RC Cola was the company’s flagship product, so the “Nehi Corporation” became the Royal Crown Company.

26. Khomeini, for one : IRANI
The Ayatollah Ruhollah Khomeini was one of the leaders of the 1979 Iranian Revolution which overthrew the Shah of Iran. After the revolution he came to power as the country’s Supreme Leader, holding the highest ranking political and religious position. When Khomeini died in 1989, there were two funerals. The first had to be aborted after a crowd of 2 million people got out of control and encroached on the funeral procession. The Ayatollah’s wooden casket broke open and his body nearly fell to the ground as devotees tried to grasp pieces of his death shroud.

30. Jocular term for fear of palindromes : AIBOHPHOBIA
“Aibophobia” doesn’t appear in the dictionary, but it is a joke term. It is a great way to describe a fear of palindromes, by creating a palindrome out of the suffix “-phobia”. I would call it a “real” word though in one sense, as it has was introduced first in 1981 by all accounts, and has been around ever since.

The three most famous palindromes in English are:

36. “Gesundheit!” : BLESS YOU
“Gesundheit” is the German word for “health”, and is used in response to a sneeze in Germany, as indeed it is here in the US.

37. Noted literary narrator : DR WATSON
In the marvelous Sherlock Holmes stories by Sir Arthur Conan Doyle, Holmes’ sidekick Dr. Watson is referred to only by his family name, except for two occasions when it is revealed that his first name is John. However, in a third and final mention, Dr. Watson is called “James” by his wife, apparently a lapse in memory on the part of the author.

41. French river or department : ORNE
Orne is a department and river in the northwest of France. Perhaps one of the most famous locations in Orne is the village of Camembert, the home of the famous (and delicious!) cheese.

44. Oscar Wilde was noted for it : DRY WIT
If you didn’t know Oscar Wilde was Irish, you will when you see the name he was given at birth: Oscar Fingal O’Flahertie Wills Wilde!

51. Aleutian island : ATTU
Attu is the westernmost island in the Aleutian chain, and so is the westernmost part of Alaska. Japanese forces took the island in October 1942, eventually landing as many as 2,900 soldiers there. In May 1943, the US Army retook the island in twenty days of fighting that is now called the Battle of Attu, the only land battle to take place on US soil during WWII. I am very proud of my father-in-law, who served in the Aleutians in WWII …

54. Lucy of “Kill Bill: Vol. 1” : LIU
Lucy Liu is an Asian-American actress born in Queens, New York. Her big break came when she was chosen to play the Ling Woo character in “Ally McBeal”. I liked her in the 2000 film “Charlie’s Angels”, but as I am no fan of Quentin Tarantino, I did not enjoy “Kill Bill”.

55. Sash of a sort : OBI
An obi is a sash worn in some forms of dress in Japan both by men and women, although the styles for women tend to be more ornate.

58. Kitchenware brand : OXO
The OXO line of kitchen utensils is designed to be ergonomically superior to the average kitchen tool. The intended user of OXO products is someone who doesn’t have the normal range of motion or strength in the hands e.g. someone suffering from arthritis.

59. Diana Ross musical, with “The” : WIZ
“The Wiz”, the 1975 musical, was written by Charlie Smalls, and is an African-American adaptation of Baum’s “The Wonderful Wizard of Oz”. The film version of the stage show was released in 1978, starring Diana Ross as Dorothy and Michael Jackson as the Scarecrow. I haven’t seen it, though. “The Wizard of Oz” scares me, as the flying monkeys creep me out. There, I’ve admitted it in public …