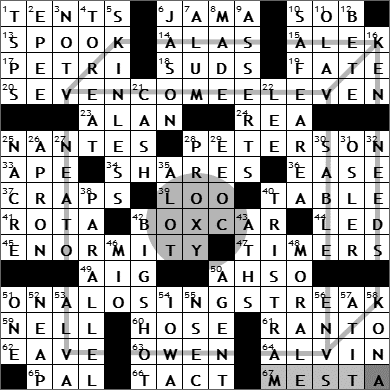 CROSSWORD SETTER: Peter A. Collins
THEME: SNAKE EYE … all the theme answers relate to the games of craps, and the puzzle comes with drawing instructions that reveal a dice showing the number one, a SNAKE EYE:

When this puzzle is done, connect the four V’s with a square, the three K’s with an upside-down L, and each K diagonally to the nearest V. Then draw a circle around the only X.


Today’s Wiki-est, Amazonian Googlies
Across
6. Weekly reading for drs. : JAMA
The AMA has been publishing the Journal of the American Medical Association (JAMA) since 1883.

17. ___ dish : PETRI
Julius Richard Petri was a German bacteriologist, and the man after whom the Petri dish is named. The petri dish can have an agar gel on the bottom which acts a nutrient source for the specimen being grown and studied, in which case the dish plus agar is referred to as an “agar plate”.

20. Cry heard at a 37-/40-Across : SEVEN COME ELEVEN
I’ve never played craps, but I just read that a “come” bet pays even money, and seven and eleven are winning rolls.

23. Philosopher Watts : ALAN
Alan Watts was a British philosopher who lived much of his life in the San Francisco Bay Area. He was noted for popularizing Eastern philosophy in the West.

24. New Deal inits. : REA
The Rural Electrification Administration was one of the New Deal agencies set up by President Franklin Roosevelt. Created in 1935, the agency’s goal was to provide electrical power to rural areas, something that the profit-conscious power companies weren’t willing to take on by themselves.

25. French city with a 1598 edict : NANTES
The Edict of Nantes was issued by King Henry IV of France in 1598. The edict granted specific rights to Protestants, a major concession in Catholic France, and was intended to end religious strife in the country.

33. Galoot : APE
“Galoot” is an insulting term, meaning an awkward or boorish man, an ape. It comes from the nautical world, where it was originally a sailor’s word for a soldier or marine.

37. With 40-Across, casino fixture : CRAPS
40. See 37-Across : TABLE
If one considers earlier versions of craps, then the game has been around for a very long time and probably dates back to the Crusades. It may have been derived from an old English game called “hazard”, also played with two dice, which was mentioned in Geoffrey Chaucer’s “Canterbury Tales” from the 1300s. The American version of the game came here courtesy of the French and first set root in New Orleans where it was given the name “crapaud”, A French word meaning “toad”.

39. Canterbury can : LOO
When I was growing up in Ireland, a “bathroom” was a room that had a bath and no toilet. The separate room with the commode was called “the toilet” or sometimes the W.C. (the water closet). Apparently the term closet was used because in the 1800s when toilets started to be installed indoors they often displaced clothes in a “closet”, as a closet was just the right size to take the commode. It has been suggested that the British term “loo” comes from Waterloo (water-closet … water-loo), but no one seems to know for sure.

41. Vatican tribunal : ROTA
The Sacred Roman Rota is somewhat like the US Supreme Court in the context of the Roman Catholic church, as it is the highest appellate tribunal in the institution. The court is called “Rota”, the Latin for “wheel”, as the judges used to sit in a round room when hearing cases.

42. Six, at a 37-/40-Across : BOXCAR
Boxcars is a slang term for two sixes rolled on a pair of dice, particularly in the game of craps. The idea is that the twelve pips on the dice resemble a pair of boxcars on a freight train.

49. 2008 U.S. govt. bailout recipient : AIG
AIG is the American International Group, a giant insurance corporation (or I should say, “was”). After repeated bailouts by American taxpayers, the company made some serious PR blunders by spending large amounts of money on executive entertainment and middle management rewards. These included a $444,000 California retreat, an $86,000 hunting trip in England, and a $343,000 getaway to a luxury resort in Phoenix. Poor judgment, I’d say …

59. Dudley’s love in old cartoondom : NELL
Dudley Do-Right appeared on the Rocky and Bullwinkle Show, a cartoon that appeared on television in a couple of different versions from 1959-1964. Dudley was a bungling Mountie who struggled with his nemesis, the evil Snidely Whiplash.

63. Wilson of “Wedding Crashers” : OWEN
The actor Owen Wilson was nominated for an Oscar, but not for his acting. He was nominated for co-writing the screenplay for “The Royal Tenenbaums” along with Wes Anderson.

64. Ailey of dance : ALVIN
Alvin Ailey was a dancer who formed his own group in New York in 1958, the Alvin Ailey American Dance Theater. The most famous work that he choreographed was called “Revelations”.

67. Hostess who inspired “Call Me Madam” : MESTA
Perle Mesta was a socialite and fundraiser for the Democratic Party. She was made U.S. ambassador to Luxembourg in 1949. Mesta was played by Ethyl Merman in the movie titled “Call Me Madam”.

2. Olympic blade : EPEE
The French word for sword is épée. In competitive fencing the épée is connected to system that records an electrical signal when legal contact is made on an opponent’s body.

6. Husband of Medea : JASON
In Greek mythology Medea was the wife of Jason, the heroic leader of the Argonauts.

7. Grad : ALUM
An alumnus (plural … alumni) is a graduate or former student of a school or college. The female form is alumna (plural … alumnae). The word comes into English from Latin, in which alumnus means foster-son or pupil.

11. Norway’s patron saint : OLAV
Of the many kings of Norway named Olaf/Olav (and there have been five), Olaf II is perhaps the most celebrated as he was canonized and made patron saint of the country. Olaf II was king from 1015 to 1028, and was known as “Olaf the Big” (or Olaf the Fat) during his reign. Today he is more commonly referred to as “Olaf the Holy”.

12. ___ noire : BETE
“Bête noire” translates from French as “the black beast” and is used in English for something or someone that is disliked.

16. Boy toy? : KEN
Barbie’s counterpart doll is Ken, and Ken’s family name is Carson. Barbie’s full name is Barbie Millicent Roberts. When Ken was introduced in 1959, it was as Barbie’s boyfriend. In 2004 it was announced that Ken and Barbie were splitting up, and needed to spend quality time apart. Both dolls are still available for purchase though.

22. Novelist Harper : LEE
Harper Lee’s Pulitzer Prize-winning novel “To Kill A Mockingbird” was first published in 1960. The book is a mainstay in English classes all around the world, a great ambassador for American literature, I’d say.

25. Inlay material : NACRE
Nacre is another name for mother-of-pearl. Nacre is the strong, iridescent material laid down by some mollusks on the inside of their shells, and it’s also what makes up pearls. The creature lays down nacre as a defensive mechanism, protecting the soft tissue of its body from the rough surface of the outer shell. Similarly, it uses nacre to encapsulate harmful debris or a parasite that gets inside its shell, and that’s how a pearl is formed.

28. Stockholder’s substitute : PROXY
Our word “proxy”, meaning “the agency of one who acts instead of another”, comes from the Latin “procurare” meaning “to manage”, the same root as for our word “procure”.

29. Antidiscrimination agcy. : EEOC
Equal Opportunity Employment is a term that has been around since 1964 when the Equal Employment Opportunity Commission was set up by the Civil Rights Act.

30. Expensive fur : SABLE
Sables are small mammals about two feet long, found right across northern Europe and northern Asia. The sable’s pelt is highly prized in the fur trade. It is unique among furs in that it feels smooth no matter which direction it is stroked.

31. Sir William who wrote “The Principles and Practice of Medicine” : OSLER
Sir William Osler was a Canadian physician, one of the principal founders of Johns Hopkins Hospital.

38. Euclidean geometry’s ___ postulate : PARALLEL
Euclid of Alexandria was a Greek mathematician who lived in the first millennium, often referred to as the “Father of Geometry”. He wrote a famous book called “Elements” on the subject of mathematics, a book so enduring that it was used as the main text for the subject right up to the late 19th century.

40. Laurence Sterne’s “___ Shandy” : TRISTRAM
Laurence Sterns is best known for his novel, “The Life and Opinions of Tristram Shandy, Gentleman”. It is an epic work, published in nine volumes over ten years.

42. Honcho : BIG SHOT
A honcho is a slang term for a leader or manager. It comes to us from Japanese, where a “hancho” is a squad (han) leader (cho).

46. “O Sole ___” : MIO
“‘O sole mio” is a famous Italian song from Naples, written in 1898. The lyrics are usually sung in the original Neapolitan, as opposed to Italian. The title translates from Neapolitan into “My Sun” (and not into “O, My Sun” as one might expect). It’s a love song of course, sung by a young man declaring that there is a sun brighter than that in the sky, the sun that is his lover’s face. Awww …

51. Snake eye (as this completed puzzle depicts) : ONE
Snake eyes is the slang term for a roll of two dice in which one pip turns up on each die.

53. Edison’s middle name : ALVA
Thomas Alva Edison was nicknamed “The Wizard of Menlo Park” by a newspaper reporter, a name that stuck with him. He was indeed a wizard, in the sense that he was such a prolific inventor. The Menlo Park part of the moniker recognized the location of his first research lab, in Menlo Park, New Jersey.

54. Herbert Hoover’s home state : IOWA
President Herbert Hoover was born in West Branch, Iowa, the only president to have been born in that state. His birthplace is now a National Landmark, and President Hoover and his wife are buried there, in the grounds of the Herbert Hoover Presidential Library and Museum. President Hoover died at the age of 90 years old in 1964 outliving his nemesis, Franklyn Delano Roosevelt, by almost 20 years.

55. Minute part of a minute: Abbr. : NSEC
A nanosecond is more correctly abbreviated to “ns”, and really is a tiny amount of time … one billionth of a second.

58. Kind of coffee : KONA
Kona coffee is cultivated on the Big Island of Hawaii, on the slopes of Mauna Loa and Hualalai, two of the five active volcanoes on the island. Coffee plants were brought to Kona in 1828, and late in the 19th century it became a viable and worthwhile crop. Today Kona is one of the most expensive and popular coffees in the world.