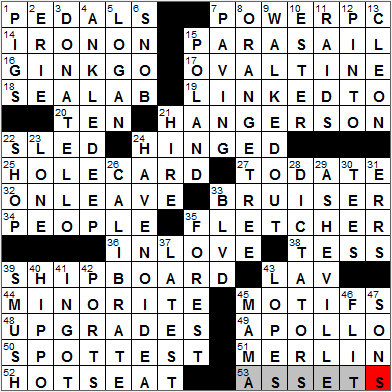 7. I.B.M. processor type found in Nintendo’s Wii : POWERPC
PowerPC was a project to develop high performance microprocessors, a joint venture that started in 1991 with an alliance between Apple, IBM and Motorola (the AIM alliance). PowerPC is an acronym for Performance Optimization With Enhanced RISC – Performance Computing. The bottom line is that it was part of the effort to thwart the dominance of Microsoft and Intel in the personal computer market. These days, PowerPC chips are mainly used by makers of gaming machines such as the Wii, PlayStation and Xbox 360.

15. Fly on a line : PARASAIL
Parasailing is hanging below a tethered parachute that is towed by a boat.

16. Chinese tree considered a living fossil : GINKGO
The Ginkgo tree is quite remarkable, in that it is regarded as a living fossil. This means that it has not evolved as a living organism, and based on fossil evidence is the same species today as it was million of years ago. As such, it is a remarkably successful species, having survived many extinction events that wiped out so much life on the planet.

17. Sponsor of old radio’s “Little Orphan Annie” : OVALTINE
Ovaltine is a milk-flavoring product that was developed in Berne, Switzerland in the early 1900s. It is still called by its original name in its native Switzerland, namely “Ovomaltine”. The “ovo-maltine” name reflects the main ingredients back then, egg and malt.

18. Man-made habitat : SEALAB
SEALAB I, II and II were man-made habitats built by the US Navy designed to advance the technology needed for humans to live and work underwater for extended periods. SEALAB I was lowered to a depth of just under 200 feet off the coast of Bermuda in 1964. Four divers stayed in SEALAB for 11 days, before the experiment was halted due to the approach of a tropical storm.

22. One drawn to igloos : SLED
The Inuit word for house is “iglu”, which we usually write as “igloo”. The Greenlandic (yes, that’s a language) word for “house” is very similar, “igdlo”.

25. It’s shown to a caller : HOLE CARD
In some variants of poker, a player must show his or her hole card when “called” by an opponent.

Stud poker is the name given to many variants of poker, all characterized by the dealer giving each player a mix of cards face-down and face-up. The cards facing downwards are called “hole cards”, cards only visible to the individual who holds that particular hand. This gives rise to the phrase “ace in the hole”, a valuable holding that only the player with the ace is aware of.

34. Its first issue featured Mia Farrow on the cover : PEOPLE
There used to be a “People” page in each issue of “Time” magazine. This page was spun-off in 1974 as a publication of its own, that we now call “People” magazine.

38. ___ Ocean, Julia Roberts’s “Ocean’s Eleven” role : TESS
“Ocean’s 11” is a great film from 1960, starring Frank Sinatra as Danny Ocean. The original storyline is updated for the excellent 2001 remake, with George Clooney playing the lead. In the 1960 movie, the love interest is a character called Beatrice Ocean, played by Angie Dickinson. In the 2001 version, the love interest gets a new name, Tess Ocean, and is played by Julia Roberts.

43. Place to wash up : LAV
Back in Ireland and the UK, the phrase “wash up” is usually reserved for “washing the dishes” after a meal, and that you wouldn’t do in “the lav” (short for “lavatory”) , but rather in the kitchen sink!

44. Follower of St. Francis : MINORITE
The most prominent of the religious orders founded by St. Francis of Assisi is the Order of Friars Minor, whose members we know simply as “Franciscans”. The “Minor” in the group’s name leads to the friars also being called “Minorites”.

51. Literary character fathered by an incubus : MERLIN
In folklore, a succubus is a female demon that takes on the form of an attractive female in order to seduce unwitting men. The succubus draws energy from the seduced men in order to survive, using sexual intercourse in the same way that a vampire might suck blood for the same purpose. The word succubus derives from the Latin “succubare”, itself from “sub” “cubare” meaning “to lie under”. There was a male equivalent to a succubus … an incubus.

Down
1. Litter producers, in two different senses : PIGS
The young of a pig are collectively known as a litter. And someone untidy, possibly described as a pig, might produce a lot of litter.

2. Ontario’s Fort ___ : ERIE
The original Fort Erie was built by the British in 1764. The current structure can be visited today, located in the province of Ontario, just across the Niagara River from the city of Buffalo, New York.

3. Famous relief worker? : DONATELLO
The early Renaissance Italian artist known as Donatello is most famous for his work in bas-relief. In bas-relief an image projects just a little above the background, as in perhaps a head depicted on a coin.

5. Wolverine’s alias in “X-Men” : LOGAN
Australian actor Hugh Jackman is most famous perhaps for his recurring role as Wolverine in the “X-Men” series of films, but as I don’t really “do” superhero movies, I like him best from the romantic comedy “Kate & Leopold” and the epic “Australia”.

6. “He who meanly admires mean things,” per Thackeray : SNOB
William Makepeace Thackeray was an English novelist. His most famous work is “Vanity Fair”.

8. Target of a mealybug : ORANGE TREE
Mealybugs seem to cause most trouble for citrus crops, but also cause damage to sugarcane, grapes and even orchids.

10. Dimethyl sulfate, for one : ESTER
Esters are very common chemicals. The smaller, low-molecular weight esters are usually pleasant smelling and are often found in perfumes. At the other end of the scale, the higher-molecular weight nitroglycerin is a nitrate ester and is very explosive, and polyester is a huge molecule and a type of plastic.

12. Sporting a coat of many colors : PINTO
A “pinto” is a horse with patchy markings of white mixed with another color. “Pinto” means “painted” in American Spanish.

13. Political rival of Pericles : CLEON
Cleon and Pericles were both statesmen in Ancient Greece, specifically in the city-state of Athens. Pericles and Cleon were political opponents, with Pericles falling foul to the maneuvers of Cleon, and eventually dying of the plague.

15. Where Samuel Goldwyn was born : POLAND
Samuel Goldwyn made it big, but the hard way. He was born in 1879 in Warsaw, Poland, the son of Polish Jews, with the original name Schmuel Gelbfisz. When he was young he moved to Birmingham in England, and while there he used the name Samuel Goldfish. He eventually made his way to Upstate New York, and found his calling as a salesman, rising to the level of VP of Sales in the garment industry. He loved the movies, and put together a movie-making business with a friend, Archibald Selwyn. The two combined their names and decided to call their enterprise Goldwyn Pictures. Schmuel Gelbfisz changed his name soon after to Samuel Goldwyn.

29. Home of the Biltmore Estate : ASHEVILLE
Biltmore House is a magnificent mansion located near Asheville, Tennessee. It was built by the George Washington Vanderbilt II in the late 1800s. It is still privately owned, and is the largest privately owned residence in the whole country. The house is now open to the public. My wife and I wanted to visit the estate not too long ago but, to be honest, we decided against it as we found the entrance fee a little steep ($69 per person for a self-guided tour).

30. Inexpensive pro shop buys : TEES
Those would be golf tees at the pro shop.

40. Gloria in “Madagascar,” e.g. : HIPPO
“Madagascar” is an animated film released in 2005. It’s a story about zoo animals, used to “the easy life” in captivity, getting shipwrecked on the island of Madagascar off the African coast.

42. Destinations for some wires : PORTS
A computer port is a physical interface between a computer and another computer or a piece of computer equipment. The word “port” is used as it comes from the Latin “porta” meaning “gate, entrance, door”.

47. Pearl S. Buck’s sequel to “The Good Earth” : SONS
Pearl S. Buck’s novel “The Good Earth” won a Pulitzer in 1932, and helped Buck win the Nobel Prize for literature a few years later. The story tells of life in a Chinese village, and follows the fortunes of Wang Lung and his wife O-Lan. Although “The Good Earth” has been around for decades, it hit the best seller list again in 2004 when it was a pick for Oprah’s Book Club.