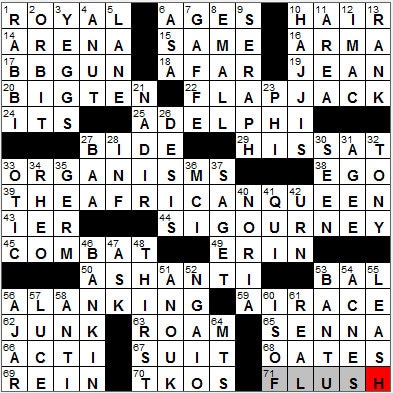 CROSSWORD SETTER: Peter A. Collins
THEME: ROYAL FLUSH … the end of the starred clues give us the cards making up a ROYAL FLUSH. There is a “blurb” which comes with the puzzle helping us to solve it … “When this puzzle is done, you will find that the ends of the answers to the five starred clues, when in the 15-/67-Across, comprise a 1-/71-Across”.

When this puzzle is done, you will find that the ends of the answers to the five starred clues:

10. “Easy to Be Hard” musical : HAIR
The full name of the famed show from the sixties is “Hair: The American Tribal Love-Rock Musical”. This controversial work outraged many when it was first performed in the sixties, as it attacked many aspects of life at the time. For example, the song “Air” is a satirical look at pollution, sung by a character who comes onto the stage wearing a gas mask. The opening lines are “Welcome, sulfur dioxide. Hello carbon monoxide. The air … is everywhere”. How things have changed in fifty years said he … satirically …

16. First word of the “Aeneid” : ARMA
The Aeneid is Virgil’s epic poem that tells of the journey of Aeneas, a Trojan who traveled to Italy to become the ancestor of all Romans.

17. Requested gift in “A Christmas Story” : BB GUN
The 1983 film “A Christmas Story” has become a holiday classic. The movie is based on short stories and anecdotes from Jean Shepherd, whose voice appears in the soundtrack as the adult “Ralphie”. All young Ralphie wants for Christmas is a Red Ryder BB Gun.

19. Shepherd who co-wrote “A Christmas Story” : JEAN
Jean Shepherd was a story teller and radio personality, most remembered today for the 1983 film “A Christmas Story”, which he co-wrote and narrated. Shepherd also makes a cameo appearance in the movie, so keep an eye out for him when watching the film next Christmas. Shepherd plays a man in line waiting to see Santa Claus in the department store. He points out to Ralphie that the line for Santa is much longer than the youngster thinks.

20. *Midwest conference : BIG TEN
The Big Ten is the nation’s oldest Division I college athletic conference and today is comprised of not ten, but eleven colleges mainly located in the Midwest. The conference was founded in 1896 and earned the name “Big Nine” in 1899 when Iowa and Indiana joined to bring the number of teams in the conference to nine. The conference name was changed to the Big Ten after Michigan rejoined in 1917. Right after WWII, the University of Chicago dropped out so the conference became known as the Big Nine again until 1949. The official designation of “Big Ten” was adopted in 1987 when the conference (once again with with a complement of ten teams) registered as a not-for-profit corporation. It was decided to keep the official name of Big Ten even after Penn State joined in 1990 bringing the number of schools to the current level of eleven.

25. Long Island university : ADELPHI
Adelphi University is located in Garden City, New York on Long Island. The university started out as Adelphi Academy in Brooklyn in 1863. By 1929 the academy had moved to Garden City and was a woman’s college. It reverted to co-education after WWII when it admitted many students under the GI Bill.

39. *1951 Bogart/Hepburn film : THE AFRICAN QUEEN
The excellent 1951 movie “The African Queen” is a screen adaptation of a novel with the same name by C. S. Forster. The stars of course were Katherine Hepburn and Humphrey Bogart, and the film won Bogie his only Oscar. Some scenes were shot on location in Uganda and the Congo, where conditions were far from ideal for making a film. Most of the cast fell ill at various times, although Bogart remained hale and hearty. He claimed that was because he stuck to his own supply of whiskey rather than drinking the local water!

44. Weaver of tales on the big screen : SIGOURNEY
The 1979 sci-fi horror movie alien was the big break for Sigourney Weaver, as it was her first lead role, and her character ended up as central to a whole set of sequels. The movie’s producers made a very conscious decision to cast a female in the lead role so as to have the film stand out in the male-dominated genre of science fiction.

49. Limerick’s land : ERIN
Erin is an anglicized version of “Eire”, the Irish word for Ireland (actually it corresponds to Eirinn, the dative case of “Eire”).

Limerick is a county (and a city) in the west of Ireland.

50. One-named female singer with the 2002 #1 hit “Foolish” : ASHANTI
Ashanti Douglas is an American R&B singer who uses just Ashanti as her stage name.

65. Medicinal shrub : SENNA
Sennas are used as purgatives and laxatives.

68. Hall’s partner in pop music : OATES
Daryl Hall & John Oates are a pop music duo, most successful in the late seventies and early eighties. They had six number one hits, including the 1982 release “Maneater”.

70. Ring results, briefly : TKOS
In boxing, a knockout (KO) is when one of the fighters can’t get up from the canvas within a specified time, usually 10 seconds. This can be due to fatigue, injury, or the participant may be truly “knocked out”. A referee, fighter, or doctor may also decide to stop a fight without a physical knockout, especially if there is concern about a fighter’s safety. In this case, the bout is said to end with a technical knockout (TKO).

Down
3. Safecrackers : YEGGS
Yegg is a slang word for a burglar, and in particular a safe-cracker. The origin of the term appears to be unknown.

7. Faux pas : GAFFE
Our word “gaffe” , meaning a social blunder, comes from the French word “gaffe” meaning “clumsy remark”, although it originally was (and still is) the word for “boat hook”. The exact connection between a boat hook and a blunder seems to be unclear.

The term “faux pas” is French in origin, and translates literally as “false step” (or “false steps”, as the plural has the same spelling).

9. One of the highest order of angels : SERAPH
A seraph is a celestial being found in Hebrew and Christian writings. The word “seraph” (plural seraphim) literally translates as “burning one”.

10. Pilgrims to Mecca : HAJJIS
A Haji (also “Hajji”) is the term used for someone who has made a pilgrimage to Mecca, and it is sometimes also used as a form of address for such a person. The journey itself goes by the name “haj” or “hajj”.

12. Computer that once came in Bondi Blue : IMAC
The iMac is a desktop computer platform from Apple, introduced in 1998. One of the main features of the iMac is that it is an “all-in-one” design, with the computer console and monitor integrated.

23. Greek symbol for the golden ratio : PHI
The golden ratio, denoted by the Greek letter phi, is a mathematical constant that often turns up in the world of art. Phi is approximately equal to 1.61, and is represented by the two distances, a and b, where (a+b)/a = a/b. Somehow we perceive the ratio of 1.61 as “pleasing” so it appears in many works of art and in building design. For example, many aspects of the Parthenon in Athens have the ratio of 1.61 (width compared to height). Leonardo da Vinci’s famous drawing of the Vitruvian Man also illustrates the golden ratio in the proportions of the human body, where he shows that the distance from the foot to the navel, compared to the distance from the navel to the head, is 1.61.

28. Like Beethoven’s Symphony No. 8 : IN F
Although I love all of Beethoven’s symphonies, I tend not to listen very often to the 8th. Chronologically, it is squeezed between my favorite, the 7th, and the magnificent 9th. I think I should point out that Beethoven considered the 8th a far better piece than the 7th, but his public tended not to agree.

31. James who co-wrote the script for 39-Across : AGEE
James Agee was a noted, American film critic. He wrote an autobiographical novel “A Death in the Family” that won him his Pulitzer in 1958, albeit posthumously.

32. Playwright’s prize : TONY
The full name for the Tony Award is the Antoinette Perry Award for Excellence in Theatre. Antoinette Perry was an American actress and co-founder of the American Theatre Wing, one of the organizations that selects the award recipients.

34. Prefix with -stat : RHEO-
A rheostat is an electrical device that can offer a varying degree of resistance to current flow. The English physicist Sir Charles Wheatstone first coined the term, using the Greek “rheos” meaning “flowing stream” and “stat” meaning “regulating device”.

36. Former telecom giant : MCI
MCI was a giant telecom company that suffered a similar fate to Enron, around about the same time. MCI’s stock price fell in 2000 and in maneuvers designed to protect the price, the company committed illegal acts. The larger than life CEO back then, Bernie Ebbers, is now serving a 25 year sentence in Louisiana.

37. Bob of “Full House” : SAGET
Bob Saget is a real enigma to me. He made a name for himself playing very sugary roles in TV shows like “Full House” and “America’s Funniest Home Videos”, and yet in the world of stand-up comedy he is known for very blue and raunchy routines.

40. Waterwheel : NORIA
A noria is a waterwheel used to lift water into an aqueduct for the purposes of irrigation. As the water is being lifted, the noria must be powered by an external force, and often this is animal-power (donkeys or perhaps oxen).

51. Actress Aimée of “La Dolce Vita” : ANOUK
Anouk Aimée is a French film actress. Her most famous film outside of France is probably the internationally successful French hit from 1966, “A Man and a Woman”, in which she played the female lead.

53. Zulu, e.g. : BANTU
There are hundreds of Bantu languages, mainly spoken in central, east and southern Africa. The most commonly spoken Bantu language is Swahili, with Zulu coming in second.

56. Cracked : AJAR
Our word “ajar” is thought to come from Scottish dialect, in which “a char” means “slightly open”.

57. Time founder Henry : LUCE
Henry Luce was a publisher, mainly of magazines. He was responsible for launching such iconic publications such as “Time”, “Life”, “Fortune” and “Sports Illustrated”.