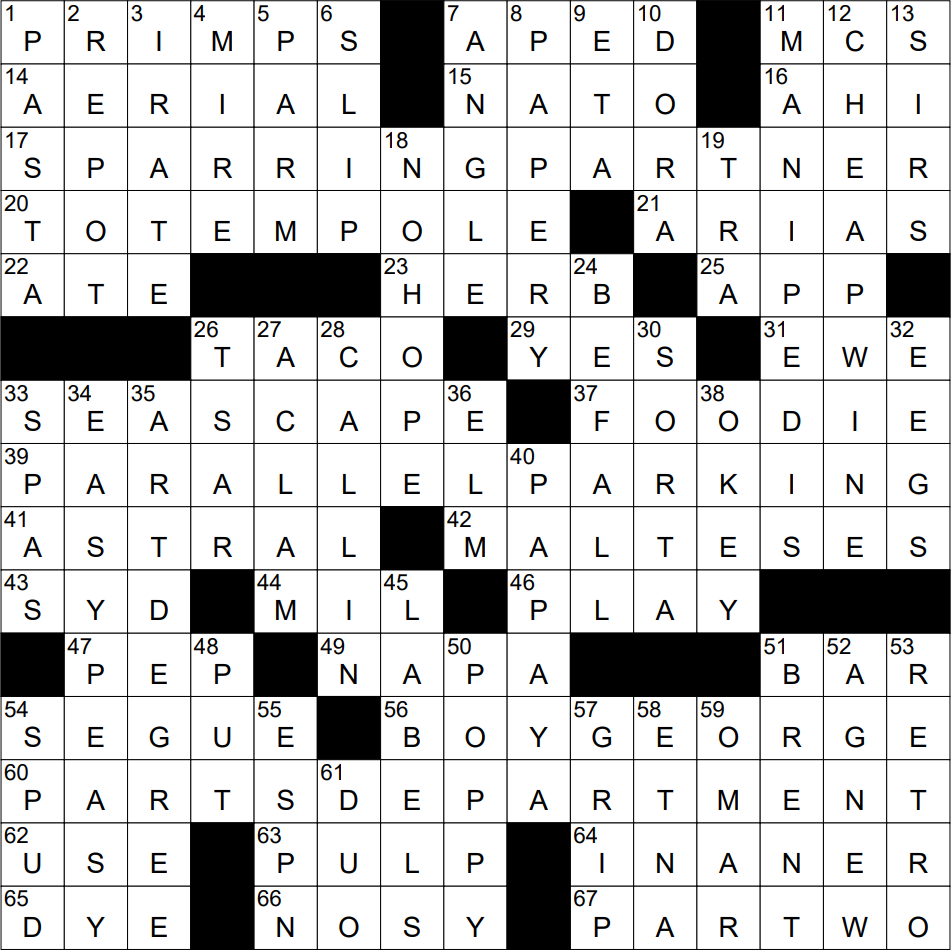 Themed answers each include TWO occurrences of “PAR” as a hidden word:

Taco Bell was founded by a former US Marine, 25-year-old Glen Bell. His first restaurant was Bell’s Drive-In, located in Southern California. After opening that first establishment, Bell bought up some more restaurants including four named El Taco. He sold off the El Taco restaurants but used the name in part when he opened his first Taco Bell in 1962. Bell then sold franchises, with the 100th Taco Bell opening in 1967. The ex-Marine sold off the whole chain to PepsiCo in 1978, and I am guessing he made a pretty penny. Taco Bell has been using the “Live Más” slogan since 2012, with “más” being the Spanish word for “more”.

The cat known as a “Maltese” is one with fur that is primarily blue or gray, regardless of breed. Such coloring was prevalent in cats on the island of Malta, hence the name.

Australia’s Sydney Airport (SYD) is located just five miles south of the city center, and next to Botany Bay. There have been plans dating back to the 1940s to build a second airport on the outskirts of the city.

That’s what I like to do, although the bar seems to be getting further and further away over the years …

Culture Club is an English pop band that was founded by the lead vocalist Boy George. The group decided on the name “Culture Club” in recognition the varied background of the four band members: representing the gay, black, white, English, Irish and Jewish communities. The band’s most successful releases are “Do You Really Want to Hurt Me”, I’ll Tumble 4 Ya”, and “Karma Chameleon”.

I’m not a big fan of director Quentin Tarantino, nor his work. His movies are too violent for me, and the size of his ego just turns me right off. Having said that, I think “Pulp Fiction” is a remarkable film. If you can look past the violence, it’s really well written. And what a legacy it has. John Travolta’s career was on the rocks and he did the film for practically no money, and it turned out to be a re-launch for him. Uma Thurman became a top celebrity overnight from her role. Even Bruce Willis got some good out of it, putting an end to a string of poorly-received performances.

Fusilli is a corkscrew-shaped pasta. The term “fusilli” comes from the Italian word “fuso” meaning “spindle”.

Parmigiana (familiarly “parm”) is a dish from southern Italy. The original parmigiana was made with an eggplant filling, with cheese and tomato layers and then baked. Versions originating outside of Italy have replaced the eggplant with breaded cutlets of chicken or veal.

12 Cabernet or merlot sold in a box, say : CHEAP WINE

51 Actor Spiner of “Star Trek: The Next Generation” : BRENT

The word “spud”, used as a slang term for “potato”, was first recorded in the mid-1800s, in New Zealand would you believe?