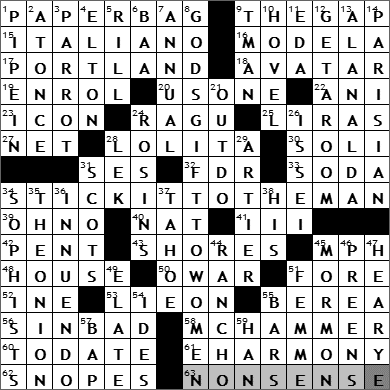 
Today’s Wiki-est, Amazonian Googlies
Across
9. Old Navy’s owner : THE GAP
Old Navy is a store brand founded and owned by The Gap. The name Old Navy was taken from the Old Navy Cafe in Paris.

Livorno is a port city on the west coast of Italy. The city is often called “Leghorn” in English, and it gave its name to the leghorn breed of chicken, and by extension to the cartoon character known as Foghorn Leghorn.

16. Ford from long ago : MODEL A
The Ford Model A was the original car produced by the Ford Motor Company. The first production run lasted from 1903 to 1904, when it was replaced by the Model C. The name “Model A” was brought back in 1927, given to the successor to the Model T.

18. 23-Across representing a user : AVATAR
The Sanskrit word “avatar” describes the concept of a deity descending into earthly life and taking on a persona. It’s easy to see how in the world of “online presences” one might use the word avatar to describe one’s online identity.

20. Rte. through 17-Across : US ONE
US Route 1 runs from Fort Kent in Maine, right down to Key West in Florida.

22. It may be groove-billed : ANI
The tropical bird called the ani is related to the cuckoo, although it doesn’t go around robbing other birds’ nests like a cuckoo!

24. “Mama’s Special Garden” brand : RAGU
The Ragu brand of pasta sauce is owned by Unilever. The name “Ragu” is the Italian word for a sauce used to dress pasta, however the spelling is off a little. In Italian the word is “Ragù” with a grave accent over the “u”, but if you look at a jar of the Unilever sauce, it is spelled “Ragú” on the label, with an acute accent. Sometimes I think we just don’t try …

27. March Madness souvenir : NET
March Madness is the name given to (among others) the NCAA Men’s Division 1 Basketball Championship, held in spring each year.

28. Literature’s Dolores Haze, familiarly : LOLITA
Vladimir Nabokov’s novel “Lolita” has a famously controversial storyline, dealing with a middle-aged man’s obsession and sexual relationship with a 12-year-old girl. Although “Lolita” is considered a classic today, after Nabokov finished it in 1953 the edgy subject matter made it impossible for him to find a publisher in the US (where Nabokov lived). In 1955, he resorted to publishing it in English at a printing house in Paris. Publication was followed by bans and seizures all over Europe. A US publisher finally took on the project in 1958, by which time the title had such a reputation that it sold exceptionally quickly. It became the first book since “Gone with the Wind” to sell over 100,000 copies in its first three weeks in the stores.

32. Drive in N.Y.C. : FDR
The full name of FDR Drive in New York City is the Franklin D. Roosevelt East River Drive. It is a parkway that runs along the East River for almost ten miles through Manhattan. A large portion of the road was built on rubble that came from Bristol, England during WWII. The rubble from the bombed city was loaded onto ships as ballast before they returned to the US after having delivered war supplies to England.

34. Oppose authority : STICK IT TO THE MAN
“The Man” is a slang term used for an authority figure. It might be used to refer to corporate leadership, or perhaps the government. The phrase “stick it to the man” means to resist authority, to fight back.

40. Giant rival, briefly : NAT
The Washington Nationals baseball team started out life as the Montreal Expos in 1969. The Expos moved to Washington in 2005, becoming the Nats. There are only two National Leagues teams that have never played in a World Series. One is the Mariners, and the other the Nats.

45. Stat on some guns : MPH
The muzzle velocity of a gun might be measured in miles per hour (mph).

48. Casino winner, often : HOUSE
The “casino” originated in the 1700s, first describing a public room for music or dancing. The name “casino” is a diminutive of “casa” meaning “house”.

50. Man ___ : O’WAR
The man-o’-war was the most powerful design of warship from the sixteenth to the nineteenth century, developed in England at the height of the British Empire.

51. Driver’s alert : FORE
No one seems to know for sure where the term “fore!” comes from. It has been used at least as far back as 1881, and has always been called out to warn other golfers that a wayward ball might be heading their way. My favorite possibility for its origin is that it is a contraction of the Gaelic warning cry “Faugh a Ballach!” (clear the way!) which is still called out in the sport of road bowling, a game where players bowl balls along roads between villages, trying to do reach the end of the course in as few bowls as possible, just like in golf!

52. Like “Spring” from Vivaldi’s “The Four Seasons” : IN E
Antonio Vivaldi was one of the great composers of the Baroque period. He achieved fame and success within in his own lifetime, notoriety that faded soon after he died. His music has reemerged in recent decades and I am sure everyone is familiar with at least part of his most famous composition, the violin concerto called “The Four Seasons”. Vivaldi was nicknamed “The Red Priest” because he was indeed a priest, and he had red hair.

55. Where Paul and Silas were sent, in Acts : BEREA
The city of Berea mentioned in the Bible in the Acts of the Apostles is known today as Veria. Veria is in modern-day Greece.

58. Stage name of entertainer Stanley Burrell : MC HAMMER
Rapper MC Hammer (aka Hammer and Hammertime) was born Stanley Kirk Burrell, and was very popular in the 80s and 90s. Being around that early, MC Hammer is considered to be one of the forefathers of rap. Nowadays, MC Hammer is a preacher, and uses the initials MC to stand for “Man of Christ”.

62. Faulkner family name : SNOPES
The author William Faulkner wrote a trilogy of novels that featured the Snopes family. The three titles are “The Hamlet”, “The Town” and “The Mansion”.

4. Singer at Diana’s funeral : ELTON
Diana, Princess of Wales was a close friend of the English singer Elton John. At the princess’s funeral, Elton John performed a revised version of his song “Candle in the Wind” to honor his departed friend. The song was released as a single under the name “Candle in the Wind 1997” It became the fastest and best-selling song of all time, and remains the only single ever to be “certified diamond” in the US.

5. Streamlet : RILL
Rill, meaning a small brook or rivulet, has German roots, the same roots as “Rhine”, the name of the major European river.

9. Bootlegger’s bugbear : T-MAN
A T-man is a law-enforcement agent of the US Treasury.

11. Writer LeShan : EDA
Eda LeShan wrote “When Your Child Drives You Crazy”, and was host of the television show “How Do Your Children Grow?” on PBS.

13. “The Four Seasons” director : ALAN ALDA
“The Four Seasons” is a wonderful film from 1981 directed by Alan Alda, staring Alda alongside Carol Burnett. The Alda family was further represented in the cast, as two of Alan Alda’s daughters also made appearances.

24. Violinists’ cake ingredients : ROSINS
Rosin is a solid form of resin derived from plant sources. It is formed into cakes that players of stringed instruments use to rub along the hairs of their bows to help improve sound quality.

26. Some nonnative Hawaiians : ISSEI
There are some very specific terms used to describe the children born to Japanese immigrants in their new country. The immigrants themselves are known as “Issei”. “Nisei” are second generation Japanese, “Sansei” the third generation (grandchildren of the immigrant), and “Yonsei” are fourth generation.

34. Fallacious reasoners : SOPHISTS
A sophist is someone who engages in devious argument. Originally “sophist” described a wise or learned person, but over time it has become a term of contempt. Our word “sophisticate” comes from the same Greek root.

35. It has unbelievable news : THE ONION
“The Onion” is a satirical news network, with a print newspaper and a heavy online presence. “The Onion” newspaper was founded by two college students at the University of Wisconsin-Madison in 1988. The founders sold the operation a year later for about $20,000. The paper grew steadily until 1996 when it began to publish online and really took off. I think it’s worth a tad more than $20,000 today …

37. Kings Beach sits on it : TAHOE
Lake Tahoe is up in the Sierra Nevada mountains right on the border between California and Nevada. Lake Tahoe is the largest alpine lake in the country. It’s also the second deepest lake, with only the beautiful Crater Lake in Oregon being deeper. Given its location, there are tall casinos that sit right on the shore on the Nevada side of the state line where gambling is legal.

38. Embroidered word, at times : HIS
The word’s “his” and “hers” are often embroidered on sets of towels.

44. Vaquero’s charge : RANCHO
“Vaquero” is the Spanish word for a “cowboy”.

45. Young follower : MORMON
Brigham Young was the second President of the Church of Jesus Christ of Later-Day Saints. Young believed in and practiced polygamy, so he has a large family of descendants. One of his more famous great-great-great-grandsons is Steve Young, the retired quarterback for the San Francisco 49ers.