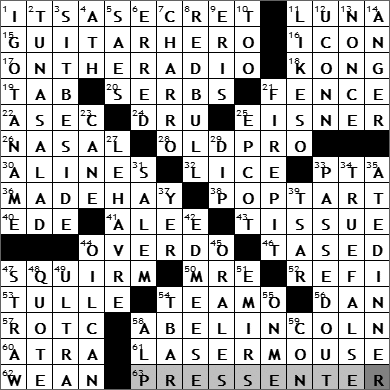 
Today’s Wiki-est, Amazonian Googlies
Across
11. Counterpart of Selene : LUNA
Selene was the Greek goddess of the moon, the equivalent of the Roman deity, Luna. Selene gave her name to the word “selenology”, the study of the geology of the moon. She also gave her name to the chemical element “selenium”. According to mythology, Selene fell in love with the handsome hunter/shepherd Endymion, a mere mortal.

15. Hit video game series featuring “hammer-ons” : GUITAR HERO
Guitar Hero is an amazingly successful series of video games, first published in 2005. It is the third best selling franchise of video games, after Mario and Madden NFL. Sales have dropped in recent years though, and there are no plans for further releases.

19. Advancement aid : TAB
Like most features on our computer keyboards, the tab key is a hangover from the days of typewriters. When using a typewriter, making entries into a table was very tedious, involving lots of tapping on the space bar and backspace key. So, a lever was added to typewriters that allowed the operator to “jump” across the page to positions that could be set by hand. Later this was simplified to a tab key which could be depressed, causing the carriage to jump to the next tab stop in much the same way that the modern tab key works on a computer.

20. Dwellers in the Southern Carpathians : SERBS
The Carpathian Mountains are the second longest range in Europe (after the Scandinavian Mountains), and run from the Czech Republic through Poland, Hungary, Ukraine and Romania and into Serbia.

24. Joanne of “Red River” : DRU
Joanne Dru’s most famous roles were in the movies “Red River” and “All the King’s Men”. She had a celebrity younger brother, Peter Marshall, the original host of “Hollywood Squares”.

25. Longtime Disney name : EISNER
Michael Eisner took over as CEO of the Walt Disney Company in 1984. He has been attributed with turning Disney around, as the company had been floundering since 1966 when Walt Disney died. He had a good run but ran afoul of Walt Disney’s nephew Roy Disney, who led a revolt by board members that resulted in Eisner’s resignation in 2005.

30. Some Dior designs : A-LINES
Christian Dior was a French fashion designer. As WWII approached, Dior was called up by the French military, drawing a temporary halt to his career in fashion. He left the army in 1942 and for the duration of the war designed clothes for wives of Nazi officers and French collaborators. After the war his designs became so popular that he helped reestablish Paris as the fashion center of the world.

32. Some ectoparasites : LICE
Ectoparasites are parasites that live on the surface of their host, like say lice and mites. Endoparasites live inside the host, like worms for example.

36. Capitalized on something : MADE HAY
As in “make hay while the sun shines”.

38. Breakfast offering : POP TART
Pop Tart is the most successful brand for the Kellogg company, as millions are sold every year. The US Military bought quite a few in 2001, and dropped 2.4 million Pop Tarts into Afghanistan during the invasion after 9/11.

40. Central Dutch city : EDE
Ede is a small town in the Netherlands located between the cities of Arnhem and Utrecht.

41. Direction at sea : ALEE
“Alee” is the direction away from the wind. If a sailor points into the wind, he is pointing “aweather”.

46. Stunned, in a way : TASED
Victor Appleton wrote a novel for young adults called “Tom Swift and His Electric Rifle”. The company that developed the TASER electroshock weapon, named their product as a homage to the novel, as TASER stands for Thomas A. Swift’s Electric Rifle. Interesting, eh?

50. C ration replacer : MRE
The Meal, Ready-to-Eat comes in a lightweight package, easier to tote around. It replaced the more cumbersome Meal, Combat, Individual (MCI) in 1981, a meal-in-a-can. In turn, the MCI had replaced the C ration in 1958, a less sophisticated meal-in-a-can with a more limited choice.

56. Steely one? : DAN
Steely Dan’s heyday was in the seventies when they toured for a couple of years, although the group mainly focused on studio work. The band was formed in 1972 and broke up in 1981. The core of the band reunited in 1993, and they are still going strong today.

57. Campus org. : ROTC
The Reserve Officers’ Training Corps (ROTC) is based in colleges all around the US. The ROTC program was established in 1862 when, as a condition of receiving a land-grant, the federal government required that military tactics be a part of a new school’s curriculum.

58. Political leader who patented a system to alter the buoyancy of steamboats : ABE LINCOLN
Abraham Lincoln served as a prairie lawyer for many years, meaning that about every six months he traveled from town-to-town for ten weeks at a time. He worked a lot on disputes involving the operation of river barges under railway bridges, and argued a case before the US Supreme Court involving a canal boat that sank after hitting a bridge. His exposure to river vessels led to him designing a device for buoying vessels over shallow shoals. He was awarded a patent for his design in 1849, making Lincoln the only US president to hold a patent.

60. Cutting-edge brand : ATRA
Fortunately for crossword setters, the Atra razor was introduced by Gillette in 1977. It was sold as the Contour in some markets, and its derivative products are still around today.

61. Optical tool for a computer user : LASER MOUSE
Thank goodness for the invention of the optical mouse. The old wheeled mouse, although it was a great device in its day, is prone to slipping on the wrong surface, and clogs up with dirt. An optical mouse is the next level of technology and uses a light emitting diode and photo-diodes to detect motion. If you don’t have one yet, go get one …

1. 1973 Jim Croce album : I GOT A NAME
Jim Croce’s most successful songs were “Bad. Bad Leroy Brown” and “Time in a Bottle”. Like so many great singers it seems, Croce died in a plane crash. He was killed along with five others just after take off when the small commercial plane in which he was travelling hit a tree, possibly because the pilot had a heart attack. Croce died just a few days before the release of his latest album, “I Got a Name”.

3. Neighbor in the bleachers, say : SIT BESIDE
At a sports event, one often sits in the “bleachers”. This is a peculiarly American term for the tiered stands that provide seating for spectators. These seats were originally wooden planks and as they were uncovered they would be “bleached” by the sun, giving the name we use today.

7. Cousin of a vaquero : CHARRO
A charro is a horseman from Mexico, similar to a vaquero, a cowboy.

8. Drink containing taurine : RED BULL
Red Bull is an Austrian drink, created in 1987. It’s the most popular “energy drink” in the world. There was controversy in 2009 when it was discovered that Red Bull imported from Austria contained trace amounts of cocaine.

9. Largest dwarf planet in the solar system : ERIS
In Greek mythology, Eris is the goddess of discord. The name “Eris” is derived from the Greek word for strife, and translates into Latin as “Discordia”. In Greek her counterpart is Harmonia, and in the world of the Roman gods, Concordia. The largest dwarf planet in our solar system is called Eris, named after the goddess.

12. East Coast b-ball powerhouse : UCONN
The University of Connecticut was founded in 1881 as the Storrs Agricultural School, taking its name from two brothers, the Storrs, who donated the land and provided initial funding.

25. Home to a famous geodesic sphere : EPCOT
EPCOT Center (now just called Epcot) is the theme park beside Walt Disney World in Florida. EPCOT is an acronym for Experimental Prototype Community of Tomorrow, and is a representation of the future as envisioned by Walt Disney. Walt Disney actually wanted to build a living community for 20,000 residents at EPCOT, but he passed away before that vision could be realized.

27. City on the Seine : LE HAVRE
Le Havre is a city on the mouth of the river Seine on the northwest coast of France. The city’s name translates as “the haven”.

31. Western capital : SALEM
Salem is the state capital of Oregon, and it is thought that the city takes its name from the older city of Salem, Massachusetts.

42. Issuer of a 1986 report on pornography : ED MEESE
Ed Meese was born in Oakland, California, just down the road here, and spent 24 years in the office of the Treasurer of Alameda County, the county in which I live. After military service he earned himself a law degree at UC Berkeley. Later, as Chief of Staff for President Reagan, he was instrumental in a famous decision to crack down on student protesters at Berkeley which resulted in one protester dying and a two-week occupation of the city by the California National Guard.

While Ed Meese was Attorney General under President Reagan, he headed up a commission to investigate pornography, publishing its report in 1986

44. “The Wizard of Oz” prop : OIL CAN
Actor Jack Haley played the Tin Man in “The Wizard of Oz”. Haley was the second choice for the role, as it was originally given to Buddy Ebsen (who later played Jedd Clampett in “The Beverly Hillbillies”). Ebsen was being “painted up” as the Tin Man when he had an extreme, near-fatal reaction from inhaling the aluminum dust makeup that was being used. When Haley took over, the makeup was changed to a paste, but it was still uncomfortable and caused him to miss the first four days of shooting due to a reaction in his eyes. During filming, Haley must have made good friends with the movie’s star, Judy Garland, as years later Jack’s son married Judy’s daughter, Liza Minnelli.

45. Mass attire : ORALES
A fanon is a vestment worn exclusively by the Pope, when he says Mass. At one time the fanon was known as an orale.

47. “The Wizard of Oz” costume : STRAW
In the 1939 movie “The Wizard of Oz”, Ray Bolger played the Scarecrow, his most famous role. At the end of the original script, Bolger (in the guise of a farmhand) heads off to agricultural school with Dorothy, hinting that there might be a romance in their future. All that was cut from the film before shooting started.

54. Funicular alternative : T-BAR
A funicular is an inclined railway, with two trams attached by a cable with one descending the slope and acting as a counterweight for the other tram as it ascends.

A T-bar is a type of ski lift in which the skiers are pulled up the hill in pairs, with each pair sitting either side of T-shaped metal bar. The bar is placed behind the thighs, pulling along the skier who remains standing on his/her skis (hopefully!). There’s also a J-bar, a similar device, but with each J-shaped bar used by one skier at a time.

55. Janis Joplin’s “Down ___” : ON ME
Famously, the singer Janis Joplin died from an overdose of heroin when she was just 27 years old. That puts her in the “27 Club”, a group of famous rock and blues musicians who died at the same age. In the club along with Joplin, are Brian Jones (of the Rolling Stones), Jimi Hendrix and Jim Morrison ans a few others.

58. Ostspitze, e.g. : ALP
The Ostspitze is a peak in the Alps in Switzerland.