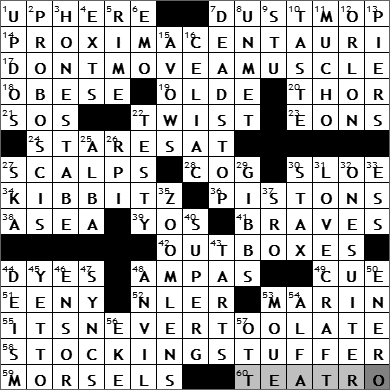 
Today’s Wiki-est, Amazonian Googlies
Across
14. Second-closest star to Earth : PROXIMA CENTAURI
Proxima Centauri is the a mere 4.2 light years away from the Earth, making it the second nearest star to our planet (the Sun, of course, is nearer). The name comes from “proxima” meaning “nearest to” and Centauri from the constellation Centaurus to which the star belongs.

19. ___ English : OLDE
The word “olde” wasn’t actually used much earlier than the 1920s. “Olde” was introduced to give a quaint, antique feel to brand names, shop names etc.

20. 2011 title role for Chris Hemsworth : THOR
The 2011 movie “Thor” is yet another film based on a comic book hero. Even though I won’t be seeing it (I don’t do comics), I must admit it does have an impressive cast. Chris Hemsworth plays Thor, supported by Natalie Portman, Rene Russo and Anthony Hopkins. And to crown it all, Kenneth Branagh is the director.

21. Song in “Mamma Mia!” : SOS
The ABBA song “S.O.S.” was originally titled “Turn Me On”. In the movie “Mama Mia!”, it is performed by Meryl Streep (brilliantly) and by Pierce Brosnan (terribly).

27. Way overcharges for : SCALPS
Scalping of tickets, selling them above retail price for an excessive profit, originated in the mid-1800s with scalpers making money off theater tickets. There was also quite a bit of money made by people scalping railway tickets. Railroads gave discounts on tickets for longer journeys, so someone trying to get from San Francisco to Chicago say, might buy a ticket to New York. Once in Chicago the passenger would scalp the remainder of his/her ticket to someone wanting to get to New York, and make his or her invested money back with a bonus.

28. Peon : COG
A peon is a lowly worker with no real control over his/her working conditions. The word comes into English from Spanish where it has the same meaning.

30. Relative of a cherry plum : SLOE
The sloe is the fruit of the blackthorn bush, and is the flavoring that gives gin its distinctive taste.

34. Meddle, in a way: Var. : KIBBITZ
To kibitz (or less commonly “kibbitz”) is to look on and offer unwanted advice. The term comes into English from German via Yiddish. “Kibitz” developed in German from the name of the bird “Kiebitz” which had the reputation as a meddler.

36. Things with rings : PISTONS
In an internal combustion engine, pistons move up and down in cylinders and turn a crankshaft and create motion. The pistons are a fairly tight fit in the cylinders, but still there needs to be a reasonable gap in order for a piston not to jam. The gap is sealed by piston rings, metal rings that are split and compressed in order to fit in the space. The rings act as seal so that gas doesn’t escape through the gap between the piston and the cylinder.

38. In a shell, maybe : ASEA
A scull is a boat used for competitive rowing. The main hull of the boat is often referred to as a shell.

48. Cultural org. with its HQ in Beverly Hills : AMPAS
The Academy of Motion Picture Arts and Sciences (AMPAS) is the organization that gives the annual Academy Awards also known as the “Oscars”. The root of the name “Oscar” is hotly debated, but what is agreed is that the award was officially named “Oscar” in 1939.

49. A shark may carry one : CUE
A pool shark carries a pool cue.

52. Cubbie, e.g. : NLER
The Chicago Cubs are one of only two teams still playing that are charter members of baseball’s National League (the other is the Atlanta Braves). The Cubs are known as the “Lovable Losers”, because they haven’t won the World Series since 1908 (after also winning it in 1907), giving the Cubs the longest spell without a World Series title in the whole of baseball.

53. It’s south of Sonoma : MARIN
When you leave the city of San Francisco via the famous Golden Gate Bridge, you cross into Marin County.

Giuseppe Verdi’s opera “Il Trovatore” is known in English as “The Troubadour”. It is one of the few operas with more than one version written by the same composer. Verdi wrote a French translation, with some revisions to the score, which goes by the name “Le trouvere”.

1. Beehives, e.g. : UPDOS
That distinctive “beehive” hairstyle is also called a B-52, because the round, beehive-shape also resembles the bulbous nose of a B-52 bomber! The style originated in 1958, and is credited to Margaret Vinci Heldt, the owner of a hair salon in downtown Chicago. I’m not a fan of the beehive, but I do have to say that Audrey Hepburn carried it off in “Breakfast at Tiffany’s”, as did Dusty Springfield in her heyday.

3. President after Ten-Cent Jimmy : HONEST ABE
Abraham Lincoln was born in a one-room log cabin in Hardin County, Kentucky, making him the first president born in the West. His formal education was limited to a year and a half of schooling, but fortunately for us, Lincoln was an avid reader and educated himself over the years. Even though he was from a rural area, he avoided hunting and fishing because he did not like to kill animals even for food.

President James Buchanan earned the nickname “Ten-Cent Jimmie” during the 1856 presidential election campaign. He was famous for his claim that ten cents a day was enough for a working man to live on.

5. Extra layer in winter? : RIME
Rime is that beautiful coating of ice that forms on surfaces like roofs, trees and grass, when cold water freezes instantly under the right conditions.

6. Modern music genre : EMO
The musical genre of “emo” originated in Washington D.C. in the 80s, and takes its name from “emotional hardcore”. Not my cup of tea …

12. 1950s sweater material : ORLON
Orlon was the brand name used by the Dupont Corporation for their acrylic fibers developed in 1941.

16. Relating to the abdominal cavity : CELIAC
Our word celiac is used for things related to the abdomen. The term is derived from the Greek “koiliakos” meaning “pertaining to the bowels”.

25. Terra ___ (pulverized gypsum) : ALBA
Terra alba (Latin for “white earth”) is a finely pulverized gypsum. It is used as a clay to make ceramics, and as a pigment for paper and paints.

26. Sch. that awarded the first civil engineering degree in the U.S. : RPI
The Rensselaer Polytechnic Institute (RPI) is a private school in Troy, New York. The university is named after its founder Stephen Van Rensselaer who set up the school in 1824. The goal of RPI has always been the “application of science to the common purposes of life”, an objective set by the founder. Given that, the name for the sports teams is quite apt, the Engineers.

27. Modern music genre : SKA
Ska originated in Jamaica in the late fifties, and was the precursor to reggae music. No one has a really definitive etymology of the term “ska”, but it is likely to be imitative of some sound.

29. Pro Football Hall of Fame coach Joe : GIBBS
Joe Gibbs is a former football coach, most famously for the Washington Redskins. After Gibbs retired, he turned his attention to his second sport, NASCAR. He runs his own teams, Joe Gibbs Racing.

30. Record label for Booker T. & the MG’s : STAX
Booker T. & the M.G.’s were in effect the house band at Stax Records, and so appeared on loads of famous recordings, including some by Wilson Pickett and Otis Redding. As such, they became synonymous with what became known as the Stax Sound. One of the unique things about the band was that it was racially integrated, with two white guys making a name for themselves in soul music, which at the time was very much part of black culture. And of course, they produced the fabulous 1962 hit “Green Onions”.

31. “The Call of Cthulhu” writer : LOVECRAFT
H. P. Lovecraft was an author of horror, fantasy and science fiction. His books aren’t my cup of tea …

40. Olympic event since ’88 : SUPER G
Super Giant Slalom is an alpine skiing event introduced in 1982. The Super G isn’t as fast as its sister event, the Downhill, but is faster than the more techinical Giant Slalom.

46. Expressionist James : ENSOR
James Ensor was a Belgian painter active in the first half of the twentieth century. He lived in Ostend for almost all of his life, and in terms of travel, he only made three brief trips abroad, to Paris, London and Holland.

53. Sulker’s expression : MOUE
Moue comes from French, and it means a small grimace, or a pout.

57. N.H.L. Senators, on scoreboards : OTT
The Senators are the NHL hockey team in Ottawa, Canada. The current team, founded in the 1992-93 season, is the second NHL team in the city to use the name “Senators”. The original team was founded in 1917, and had a very successful run until the league expanded into the US in the late twenties. The cost of operating in what became the smallest NHL city eventually drove the Senators to St. Louis where they played for a year as the Eagles before finally folding.