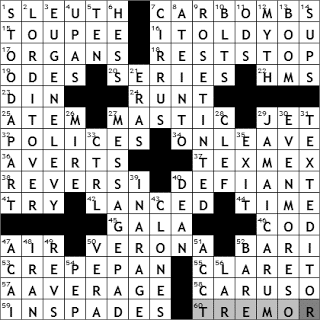 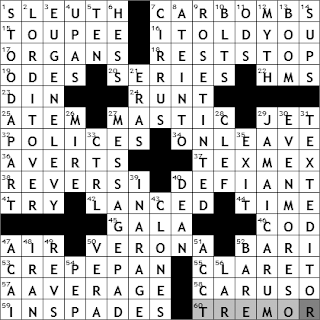 19. Pablo Neruda’s “___ to Opposites” : ODES
Pablo Neruda was the pen name, and eventually the legal name, used by Chilean writer Neftali Ricardo Reyes Basoalto. He chose the name as a homage to Czech poet Jan Neruda.

22. Naval inits. : HMS
HMS stands for Her Majesty’s Ship, a prefix used in the navies of some monarchies, most notably the UK’s Royal Navy.

24. Underweight delivery, maybe : RUNT
Back in 1500 a runt was an old or decayed tree stump, and by the early 1600s it was being used to describe animals that were similarly old and decayed, and ultimately for the smallest and often sickest of a litter.

27. Resin used in varnishes : MASTIC
Mastic is a resin taken from the mastic tree. The resin can be dried then chewed like a gum. It is this characteristic that gave the tree its name, as the Greek verb “mastichein” means “to gnash the teeth”. This is the same Greek root that gives us our word “masticate”, meaning to chew.

38. Strategy game with disks : REVERSI
The game of Reversi is also sold as Othello. The name Othello was chosen as nod to the play by William Shakespeare.

46. Rockling, e.g. : COD
Rocklings and cods are “cousins”, families belonging to the same order of fish, the Gadiformes.

47. See 48-Down : AIR
(48. With 47-Across, it stopped flying to New York in 1979 : IRAN)
Iran Air inaugurated flights between Tehran and New York in 1971. When the US imposed an embargo on Iran in 1979, the last flight scheduled from Tehran to New York never made it to its destination, instead being diverted to Montreal in mid-flight.

52. Basilica di San Nicola locale : BARI
The Basilica of Saint Nicholas is in the city of Bari, in southern Italy. On the feast of Saint Nicholas, on December 6 each year, the clergy in the church lower a flask into the subterranean tomb containing holy relics that are reputed to exude myrrh, a resin. The myrrh is shipped all over the world and has been cited as the reason for several miracles.

58. 1951 title role for Mario Lanza : CARUSO
“The Great Caruso” is a biopic released in 1951 that tells the life of the great tenor Enrico Caruso. The title role was played more than ably by Mario Lanza, and his performance helped lift the film to the top spot at the box office that year. Lanza had a very successful, but short career. He struggled with overeating and alcohol abuse, and died in 1959 at only 38 years of age.

59. To a very great degree : IN SPADES
The phrase “in spades” meaning “in abundance” dates back to the late twenties and probably comes from the game of bridge, in which spades are the highest-ranking suit.

3. 2003 Grammy winner for “A Mighty Wind” : EUGENE LEVY
Eugene Levy is a Canadian actor. He is the only actor to have appeared in all seven “American Pie” movies (there are seven of them??!!). He plays the clueless but loving Dad.

10. They’re listed near clubs : BLTS
The BLT (bacon, lettuce and tomato) is the second most popular sandwich in the US, after the plain old ham sandwich.

The club sandwich is a double-decker affair with three layers of bread and two layers of fillings. It has been around since the end of the 19th century, and some say it was invented at an exclusive gambling “club” in Saratoga Springs, New York.

21. Geologic succession : ERAS
Geologic time is divided into different units which are, starting from the longest:

28. Pitch setter : CLEF
Clef is the French word for “key”. In music, a clef is used to indicate the pitch of the notes written on the stave.

29. Spirit of the Caribbean : JAMAICA RUM
Rum was first distilled by slaves on the sugarcane plantations of the Caribbean in the 1800s, with the tradition being that the very first production came from Barbados.

47. ___ palm : ACAI
Açaí is a palm tree native to Central and South America. The fruit has become very popular in recent years as its juice is a very fashionable addition to juice mixes and smoothies.

49. Prepares for dragging : REVS
Back in the 18th century drag was slang for a wagon or buggy, vehicles “dragged” along by a horse or horses. In the 1930s, the underworld adopted drag as slang for a car. This sense of the word was imported into automobile racing in the forties, giving the name to “drag racing”. A drag race is basically a competition between two cars to determine which can accelerate faster from a standstill.

50. Bea Arthur’s “Mame” role : VERA
Actress Bea Arthur’s most famous roles were on television, as the lead in the “All in the Family” spin-off, “Maude”, and as Dorothy Zbornak in “The Golden Girls”. She also won a Tony for playing Vera Charles on stage in the original cast of “Mame” in 1966.