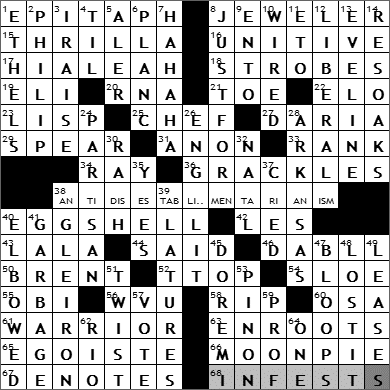 
Today’s Wiki-est, Amazonian Googlies
Across
1. It often contains “lies” : EPITAPH
Our word “epitaph” ultimately comes from the Greek “epitaphion”, the word for a funeral oration.

8. Person making a cameo, say : JEWELER
Cameo is a method of carving, often the carving of a gemstone or a piece of jewelry. The resulting image is in relief (sits proud of the background), whereas an engraved image would be produced by the similar carving method known as intaglio. Nowadays, the term cameo is used for any piece of oval-shaped jewelry that contains the image of a head, usually in profile (maybe even a photograph).

15. Start of a big 1975 sports event? : THRILLA
Muhammad Ali and Joe Frazier had three memorable fights. The first was billed as the “Fight of the Century” in 1971 in Madison Square Garden, a fight between two great boxers, both of whom were undefeated up till that point. Frazier won in a unanimous decision after fifteen rounds. A couple of years later, in 1973, Frazier lost his title to George Foreman. Ali and Frazier had a non-title rematch in 1974, with Ali coming out ahead this time, also in a unanimous decision. Later that year, Ali grabbed back the the World Heavyweight Title in “The Rumble in the Jungle”, the famous “rope-a-dope” fight against George Foreman. That set the stage for the third and final fight between Ali and Frazier, “The Thrilla in Manila”. Ali won the early rounds, but Frazier made a comeback in the middle of the fight. Ali took control at the end of the bout, so much so that Frazier wasn’t able to come out of his corner for the 15th and final round. He couldn’t come out of his corner because both of his eyes were swollen shut.

17. Florida’s ___ Park Race Track : HIALEAH
The city of Hialeah, Florida is part of the Miami metropolitan area. It’s thought that the name “Hialeah” is a Muskogee word meaning “pretty prairie”. Hialeah is known as the most densely populated city in the country that does not include a skyscraper within its limits.

19. Priest at Shiloh : ELI
In the Bible, Eli is a High Priest of Shiloh, and the teacher of Samuel. As such, his story is told in the Book of Samuel.

22. “Do Ya” band, for short : ELO
ELO of course stands for the Electric Light Orchestra, a symphonic rock group from the north of England. Their manager was Don Arden, father of Sharon Osbourne (wife of Ozzy).

23. Winthrop’s affliction in “The Music Man” : LISP
“The Music Man” is a musical by Meredith Willson. The show was a big hit on Broadway in 1957. It won the first ever Grammy Award for the “Best Original Cast Album”.

33. One of eight in chess : RANK
The squares on a chess board are divided into rows and columns called ranks and files. The terms originated in the military, where foot-soldiers were organized into horizontal ranks and vertical files.

36. Cousins of blackbirds : GRACKLES
Grackles are birds native to North and South America.

46. “A little ___ do ya” (1950s-’60s slogan) : DAB’LL
The original Brylcreem product was a pomade introduced in England in 1928. When it first appeared in a television advertisement it was touted with a jingle that started out:

Bryl-creem, a little dab’ll do ya,
Use more, only if you dare,
But watch out,
The gals will all pursue ya,–
They’ll love to put their fingers through your hair.

50. London borough with Wembley Stadium : BRENT
Wembley is a town that falls within the London Borough of Brent, and is home to Wembley Stadium and the Wembley Arena. Brent takes its name from the River Brent which runs through the area.

52. ‘Vette option : T-TOP
A T-top is a car roof that has removable panels on either side of a rigid bar that runs down the center of the car above the driver.

54. Tart plum : SLOE
The sloe is the fruit of the blackthorn bush, and is the flavoring that gives gin its distinctive taste.

55. Eastern band : OBI
The sash worn as part of traditional Japanese dress is known as an obi. The obi can be tied in what is called a butterfly knot.

61. Crazy Horse, e.g. : WARRIOR
Crazy Horse’s Lakota name translates literally into English as “His Horse is Crazy or Spirited”. Crazy Horse was one of the tribal war party leaders at the Battle of Little Bighorn, also known as Custer’s Last Stand. Crazy Horse surrendered to the US Army in 1877. He was fatally stabbed while in custody, apparently trying to escape after having surrendered. The circumstances surrounding his death are still shrouded in controversy.

66. Astronaut’s favorite dessert? : MOON PIE
Marshmallow cream was developed in 1927. Soon after, workers in the coal mines around Chattanooga, Tennessee started dipping graham crackers in marshmallow cream as a snack. Then a local baker jumped on the idea, and came up with a sandwich made with a marshmallow filling between two round graham crackers. His young grandson remarked that the popped bubbles in the marshmallow (from baking) looked like moon craters, and the Moon Pie was born. I used to love them as a kid, although we called them “Wagon Wheels” in our part of the world.

1. Rosenberg and Roosevelt : ETHELS
Julius and Ethel Rosenberg were convicted of spying for the Soviet Union and passing on secrets about the atomic bomb. The pair were executed, the first civilians to receive capital punishment in the US for such a crime. In recent years papers have surfaced that demonstrate the guilt of Julius, but cast doubt on the degree of involvement of his wife.

4. The Everly Brothers’ “(___) I Kissed You” : ‘TIL
The Everly Brothers are noted for their steel guitar sound, and their great use of harmony. Their harmony onstage wasn’t reflected off the stage though. In 1973 the brothers decided to pursue separate careers and scheduled a farewell performance attended by many fans, family and stalwarts from the music industry. Don Everly came on stage too drunk to perform, and eventually brother Phil just stormed off into the wings, smashing his guitar as he left. The boys didn’t talk to each other for ten years after that incident.

8. Popular hair care product : JUST FOR MEN
Just for Men is a hair coloring product. It is usually applied to remove gray in the hair, and is effective for one to six weeks, so they tell me …

9. Prefix with -derm : ENTO-
“Entoderm” is more usually known as “endoderm”, and is a layer of cells that is found in animal embryos.

11. Normandy was in it: Abbr. : ETO
Dwight D. Eisenhower was in command of the European Theater of Operations during WWII. If you’re a WWII buff like me, then I recommend you take a look at a great made-for-TV movie starring Tom Selleck as Eisenhower called “Ike: Countdown to D-Day

13. Story from Joyce’s “Dubliners” : EVELINE
“Dubliners” is a collection of 15 short stories by Irish author James Joyce, published in 1914. The stories illustrate middle class life around the city of Dublin in the early 1900s.

Robert Browning met Elizabeth Barrett in 1845. Elizabeth was a sickly woman, confined to her parents’ house in Wimpole Street in London, largely due to the conservative, protective nature of her father. The two eventually eloped in 1846, and lived in self-inflicted exile in Italy. Away from the country of his birth, Browning was moved to write his now famous “Home Thoughts, From Abroad”, the first line of which is “Oh, to be in England …”

William Golding was a British author, best known for his outstanding novel “Lord of the Flies”. He was awarded the Nobel Prize for Literature in 1983. Golding was in the Royal Navy in WWII and participated in the actions that sank the German battleship “Bismarck”, and he commanded a landing ship during the Normandy Invasion.

28. Home of the 42nd U.S. president : ARKANSAS
President Bill Clinton was born not as a Clinton, but as William Jefferson Blythe. His father was killed in a car accident just three months before he was born. His mother remarried a few years later, to Roger Clinton. Bill didn’t formally adopt the Clinton name until he was fourteen years old, although he used it as he was growing up.

32. Kind of chart : NATAL
A natal chart is an astrological chart that is based on the exact time that a person is born.

41. Claptrap : GARBAGE
“Claptrap” these days means nonsense talk. It was originally a term used on the stage meaning a trick to attract applause, hence the name “clap trap”.

No one seems to know where the term “moolah” comes from, but it has been around since the 1920s.

47. Hardly line drives : BLOOPS
A bloop single is more usually called a blooper. It’s fly ball that drops for a single between and infielder and an outfielder (in baseball, of course!).

49. Papers on pads? : LEASES
Back in the 16th century a “pad” was a bundle of straw to lie on, and came to mean a “sleeping place” in the early 1700s. The term was revitalized in the hippie era.

53. New Mexico’s state tree : PINON
The piñon is also known as the pinyon pine, and is a tree that grows in the American Southwest and in Mexico. Pinyon nuts (a type of pine nut) are quite delicious …

62. 2016 Olympics host : RIO
When the Olympics are held in 2016 in Rio de Janeiro, they will be the first Olympic tournament to be held in South America, and the first in a Portuguese-speaking country.