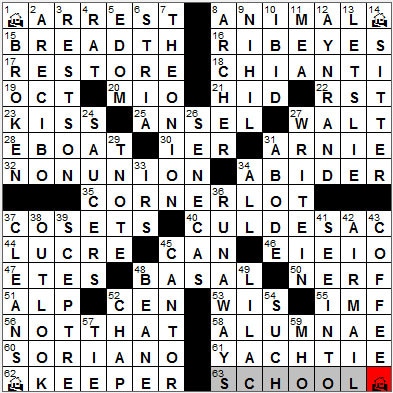 CROSSWORD SETTER: Samuel A. Donaldson
THEME: CORNER LOT … this is a rebus puzzle with the word HOUSE occupying the corner squares of the grid (represented by a “house” symbol):
1A. It’s better than prison : HOUSE ARREST
8A. #1 on Bravo’s all-time “100 Funniest Movies” list : ANIMAL HOUSE
35A. Prominent location to build on (as suggested by this puzzle?) : CORNER LOT
62A. Help : HOUSEKEEPER
63A. Place of learning : SCHOOLHOUSE
1D. Always going outside? : HOUSEBROKEN
14D. Vacationer’s help : HOUSE SITTER
37D. Gets rid of everybody, say : CLEANS HOUSE
43D. Place where people work for beans? : COFFEEHOUSE
COMPLETION TIME: 18m 34s
ANSWERS I MISSED: 0


Today’s Wiki-est, Amazonian Googlies
Across
1. It’s better than prison : HOUSE ARREST
A person under house arrest often wears an ankle monitor that is used to ensure that he or she does not stray far from home. An alternative system involves random calls to the confined person’s home that have to be answered by the convict. On the face of it, house arrest seems to be a very economic alternative for a society instead of the prison system. As part of the sentence, the convict may even be asked to pay for the cost of monitoring his or her house arrest.

18. Italian red : CHIANTI
Chianti is a red wine from Tuscany in Italy. Historically it was stored in a characteristically bulbous bottle wrapped in a straw basket, although these days the pragmatists have won the day and regular wine bottles tend to be used.

20. Mine, in Milan : MIO
Milan is Italy’s second largest city, second only to Rome. Milan is a European fashion capital, the headquarters for the big Italian fashion houses of Valentino, Gucci, Versace, Armani, Prada and others. Mario Prada was even born in Milan, helping establish the city’s reputation.

25. Adams behind a lens : ANSEL
As an amateur photographer, I have been a big fan of the work of Ansel Adams for many years and must have read all of his books. He was famous for the clarity and depth in his black and white images. Central to his technique was the use of the zone system, his own invention. The zone system is a way of controlling exposure in an image, particularly when there is a high contrast in the subject. Although the technique was developed primarily for black & white film, it can even apply to digital color images. In the digital world, the main technique is to expose an image for the highlights, and one or more images for the shadows. These images can then be combined digitally giving a final image with a full and satisfying range of exposures.

28. W.W. II attacker : E-BOAT
In WWII, the German Navy’s Motor Torpedo Boats (a version of the American PT boat) were called S-boots, short for Schnellboot (“fast craft”). The Allied forces referred to them as E-boats, with the “E” possibly standing for “enemy” or “Eilboot” (“hurry boat”).

31. Emmy-nominated sitcom of the early 1970s : ARNIE
“Arnie” is a sitcom from the seventies that starred Herschel Bernardi as a blue-collar worker promoted to the executive offices. It never really made it though.

40. You can’t go through with it : CUL-DE-SAC
Even though “cul-de-sac” can indeed mean “bottom of the bag” in French, the term cul-de-sac is of English origin (the use of “cul” in French is actually quite rude). It was introduced in aristocratic circles at a time when it was considered very fashionable to speak French. Dead-end streets in France are usually signposted with just a symbol and no accompanying words, but if words are included they are “voie sans issue”, meaning “way without exit”.

46. Farm letters? : EIEIO
There was an American version of the English children’s song “Old MacDonald Had a Farm” (E-I-E-I-O), that was around in the days of WWI. The first line of the US version goes “Old Macdougal had a farm, in Ohio-i-o”.

47. When the French toast? : ETES
In France the weather is toasty warm in the summer (“été”).

48. Kind of cell in biology : BASAL
The basal layer of the outer skin of mammals is 1-3 cells thick. The cells in the basal layer are undifferentiated and when they divide, the daughter cells turn into the specialized cells of the other four layers of the skin.

50. Big name in balls : NERF
Nerf is the name given to the soft material used in a whole series of toys designed for “safe” play indoors. The Nerf product is used to make darts, balls and ammunition for toy guns. The acronym NERF stands for Non-Expanding Recreational Foam.

55. Org. employing Ethan Hunt in film : IMF
It was Tom Cruise’s idea to adapt the “Mission Impossible” television series for the big screen, and it became the first project for Cruise’s new production company. Tom Cruise took on the starring role of Ethan Hunt in the movies, the point man for the Impossible Missions Force (IMF).

58. Mount Holyoke graduates, e.g. : ALUMNAE
An alumnus (plural … alumni) is a graduate or former student of a school or college. The female form is alumna (plural … alumnae). The word comes into English from Latin, in which “alumnus” means foster-son or pupil.

The Seven Sisters are a group of (traditionally women’s) colleges in the northeast of the country. The seven are:

60. Seven-time major-league All-Star Alfonso : SORIANO
Alfonso Soriano is a professional baseball player from the Dominican Republic, currently playing as an outfielder for the Chicago Cubs. In 2004 Soriano sent a donation of $2.6 million dollars back to his homeland to help children who had an ambition to become become professional baseball players.

2. ___ Observatory, home of the world’s largest single-aperture radio telescope : ARECIBO
The Arecibo Observatory in Puerto Rico is home to a large radio-telescope. There’s a fair chance you’ve seen the observatory on the big screen as it was featured prominently in the James Bond film “GoldenEye”, and in the Jodie Foster movie “Contact”.

5. Biblical kingdom : EDOM
Edom is an ancient Iron Age kingdom located in the south of modern-day Jordan. The area is known for its red-colored sandstone, which gave the kingdom its name. The Hebrew word “Edom” translates as “red”.

6. Tiny groove : STRIA
A stria is a linear mark or groove on a surface, often one of a series of parallel lines.

7. Publication with a 1997 headline “Drug Use Down Among Uncool Kids” : THE ONION
“The Onion” is a satirical news network, with a print newspaper and a heavy online presence. “The Onion” newspaper was founded by two college students at the University of Wisconsin-Madison in 1988. The founders sold the operation a year later for about $20,000. The paper grew steadily until 1996 when it began to publish online and really took off. I think it’s worth a tad more than $20,000 today …

8. Zodiac symbol : ARCHER
Sagittarius is a constellation of the zodiac, with “sagittarius” being the Latin for “archer”. The constellation is usually represented by a centaur (half-bull, half-man) with a bow.

10. Scholar’s reference abbr. : IBID
Ibid. is short for the Latin word “ibidem” and is typically found in footnotes and bibliographies. Ibid. is used to refer the reader to the prior citation, instead of giving the same information (title, author etc.) all over again.

11. Start of a confession : MEA
Roman Catholics are very familiar with the Latin phrase “mea culpa” meaning “my fault”, as it is used in the Latin Mass. The additional term “mea maxima culpa” would translate as “my most grievous fault”.

12. Who wrote “Wealth is the product of man’s capacity to think” : AYN RAND
Ayn Rand was a Russian-American novelist born Alisa Rosenbaum. Her two best-known works are her novels “The Fountainhead” published in 1943 and “Atlas Shrugged” from 1957. Back in 1951, Rand moved from Los Angeles to New York City. Soon after, she gathered a group of admirers around her with whom she discussed philosophy and shared drafts of her magnum opus, “Atlas Shrugged”. This group called itself “The Collective”, and one of the founding members was none other than future Federal Reserve chairman, Alan Greenspan.

26. Six Nations tribe : SENECAS
The Seneca nation’s name came from their principal village of Osininka. There is no link at all with Seneca the famous Roman statesman, and the similarity in name is just a coincidence.

27. Kind of candidate who’s rarely successful : WRITE-IN
A write-in candidate in an election is one for whom one can vote, but one whose name does not appear on the official ballot. Electors have to take the extra step of writing the candidate’s name on the ballot, an added step that makes it really hard for the candidate to emerge victorious. In a 1967 local election in Ecuador, a company ran a marketing campaign for a foot powder called Pulvapies, using the catchphrase “For Mayor: Honorable Pulvapies”. Some electors wrote in the name Pulvapies on their ballots, and the foot powder won …

29. It matures in 1 to 10 yrs. : T-NOTE
A Treasury note (T-Note) is a government debt that matures in 1-10 years. A T-Note has a coupon (interest) payment made every six months. The note is purchased at a discount to face value, and at the date of maturity can be redeemed at that face value. A T-Bill is a similar financial vehicle, but it matures in one year or less, and a T-Bond matures in 20-30 years.

39. Royal rod, in Britain : SCEPTRE
A scepter (“sceptre” in UK English) is a ceremonial staff often held by a monarch.

45. Hymn leader : CANTOR
“Canto” is the Latin word for “singer”. In some Christian traditions, a cantor is the person assigned to lead the singing of ecclesiastical music.

48. Baseball general manager Billy : BEANE
Billy Beane is the general manager of the Oakland Athletics baseball team. Michael Lewis wrote his book “Moneyball” about the way Billy Beane built his team by bringing on board players who were “undervalued”, getting the maximum benefit from his limited payroll budget. I must admit I know nothing about baseball, but I thoroughly enjoyed reading “Moneyball”, and can’t wait to see the movie that was made from the book, with Brad Pitt playing Beane.