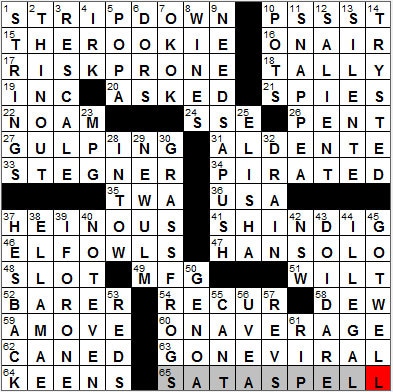 
Today’s Wiki-est, Amazonian Googlies
Across
15. 1990 Clint Eastwood cop film : THE ROOKIE
“The Rookie” is a 1990 action movie featuring a pair of cops. Clint Eastwood plays the veteran detective, and he is teamed with a rookie, played by Charlie Sheen.

19. Money competitor : INC
“Inc.” is a business magazine that specializes in articles about growing companies.

22. Pitlik who directed “Barney Miller” and “Mr. Belvedere” : NOAM
Noam Pitlik was a television director and actor. He won a Best Director Emmy in 1979, for his work on the sitcom “Barney Miller”.

31. Firm : AL DENTE
The Italian expression “al dente” literally means “to the tooth” or “to the bite” and is used to describe not only pasta, but also vegetables that are cooked so that they are tender yet still crisp.

35. Old “One mission. Yours.” sloganeer : TWA
Trans World Airlines (TWA) was a big carrier in the US, but was perhaps even more recognized for its extensive presence in Europe and the Middle East. For many years, especially after the collapse of Pan-Am, TWA was considered the unofficial flag carrier for the US. The company started in 1930, the product of a forced merger of Transcontinental Air Transport and Western Air Express. The Transcontinental and Western Air that resulted (the original meaning of the acronym TWA) was what the Postmaster General wanted, a bigger airline to which the Postal Service could award airmail contracts.

36. Miss ___ : USA
The Miss USA beauty pageant was founded in 1952 in order to select the American candidate for the Miss Universe competition.

41. Blowout : SHINDIG
“Shindig” is such a lovely word, I think, describing a party that usually includes some dancing. Although its origin isn’t really clear, it perhaps comes from “shinty”, a Scottish game similar to field hockey.

46. Small night creatures : ELF OWLS
The tiny Elf Owl is the lightest of all owls, usually weighing less than 1½ ounces, with a height of about 5 inches.

47. Reckless smuggler of sci-fi : HAN SOLO
Han Solo was the space smuggler in “Star Wars” played by Harrison Ford. Ford was originally hired by George Lucas just to read lines for actors during auditions for “Star Wars”, but over time Lucas became convinced that Ford was right for the pivotal role of Han Solo.

62. Hit the bottom of? : CANED
Corporal punishment in schools is still legal in 20 US States, mostly in the south of the country.

64. Laments : KEENS
“To keen” is to wail in lamentation. Keening has its roots in Ireland, coming from the Irish word “caoinim” meaning “I weep, wail, lament”.

Down
3. Change one’s image, in a way? : RESCALE
One can rescale a photographic image, change its size.

5. ___ wheelie : POP A
“To pop a wheelie” is a lift the front wheels of a vehicle off the ground by accelerating rapidly with the rear wheels.

6. Actress Diana : DORS
I remember Diana Dors in the movies of my youth. She was considered the English equivalent of the “blonde bombshell” of Hollywood in the fifties. She was so successful early in her career that at the age of 20 she became the UK’s youngest registered owner of a Rolls Royce car.

8. Blushes, say : WINES
The term “blush” in the world of wine has been around since the late seventies, and is really only used here in the US. Today we think of a blush as a relatively sweet pink wine, and a rosé as something drier.

14. Met on the down-low : TRYSTED
Something described as “down-low” is “secret”.

25. Kings prophet : ELISHA
The prophet Elisha is mentioned both in the Hebrew Bible and the Qur’an. In the Islamic tradition, Elisha is usually known by his Arabic name, Alyasa.

29. Minnesota home of Martin Luther College : NEW ULM
The city of New Ulm, Minnesota was founded in 1854 by German immigrants and is named after the city of Ulm in the south of Germany. The city’s German roots led to New Ulm developing a brewing industry. It is home to the August Schell Brewing Company, the second-oldest family-owned brewery in the country.

37. Alice Cooper’s appropriately titled theme song for “Friday the 13th Part VI” : HE’S BACK
“Friday the 13th: Jason Lives” was the sixth in twelve (so far!) of a very successful slasher film series. How many have I sat through? Well, that would be none …

Outrageous rock singer Alice Cooper’s real name is Vincent Furnier. Alice Cooper was originally the name of the band that Furnier fronted, but he adopted the name as his own when he started his solo career in 1975. Outside the recording studio, Cooper is an exceptional golfer. He has stated that golf was a great help to him as he overcame addiction to drugs and alcohol.

38. Morse who sang “Cow-Cow Boogie” : ELLA MAE
Ella Mae Morse was a singer from Texas, first hired by bandleader Jimmy Dorsey when she was just 14 years old (she told him she was 19!).

50. Explorer John Cabot’s birthplace : GENOA
Giovanni Caboto (known in English as “John Cabot”) was an Italian explorer. He is believed to have been the first European to visit North America since the Vikings landed here in the 11th century. Many say that he landed in Newfoundland in 1497.

53. Some M&M’s : REDS
Forrest Mars, Sr. was the founder of the Mars Company. He invented the Mars Bar while living over in England, and then developed M&M’s when he returned to the US. He came up with the idea for M&M’s when he saw soldiers in the Spanish Civil War eating chocolate pellets. Those pellets had a hard shell of tempered chocolate on the outside to prevent them from melting. Mars got some of the funding to develop the M&M from William Murrie, the son of the president of Hershey’s Chocolate. It is the Ms from Mars and Murrie which give the name to the candy.

56. Eye part : UVEA
The uvea is the middle of the three layers that make up the eyeball.