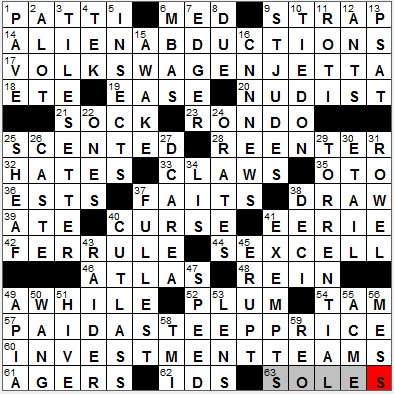 
Today’s Wiki-est, Amazonian Googlies
Across
1. Singer/songwriter Scialfa : PATTI
Patti Scialfa is a singer, songwriter and guitar player from Deal, New Jersey. She joined the E Street Band in 1984, having met Bruce Springsteen a few years earlier. Springsteen and Scialfa were married in 1991.

18. It can heat up Roquefort : ETE
One might spend the summer (été) in Roquefort in France.

35. Relatives of the Iowa : OTO
The Otoe (also Oto) Native American tribe originated in the Great Lakes region as part of the Winnebago or Siouan tribes. The group that would become the Otoe broke away from the Winnebago and migrated southwestwards ending up in the Great Plains. In the plains the Otoe adopted a semi-nomadic lifestyle dependent on the horse, with the American bison becoming central to their diet.

37. Sartre’s “Les Jeux Sont ___” : FAITS
“Les jeux sont faits” is a screenplay written by Jean-Paul Sartre in 1943, eventually produced as a film in 1947. The title translates as “The Bets Have Been Placed”, a term often heard in casinos in French speaking countries.

42. Tool handle strengthener : FERRULE
A ferrule is a circular ring often made of metal. One might use a ferrule when plumbing to seal a joint, or as a reinforcing “strap” around say a a wooden handle on a tool. The metal sleeve that holds an eraser on the end of a pencil is also a good example of a ferrule.

46. Titan after whom one of the oceans is named : ATLAS
In Greek mythology, Atlas was one of the Titans. Famously, he supported the heavens on his shoulders, while crouched on what are now called the Atlas Mountains in Greece.

54. Lid around a loch : TAM
A tam o’shanter is a man’s cap traditionally worn by Scotsmen. “Tams” were originally all blue (and called “blue bonnets”) but as more dyes became readily available, they became more colorful. The name tam o’shanter comes from the title character of Robert Burns poem “Tam O’Shanter”.

63. They go with uppers : SOLES
Uppers and soles are parts of shoes.

Down
4. Drug in a sci-fi novel series : TEK
The “Tekwar” series of science-fiction novels was co-authored by Ron Goulart and the actor William Shatner, although it’s only Shatner’s name who appears on the covers. The stories center around the microchip “drug” called “tek” which dominates the Tekwar universe.

6. Suits often hold them : MBAS
The world’s first MBA degree was offered by Harvard’s Graduate School of Business Administration, in 1908.

9. Memphis hospital, familiarly : ST JUDE’S
The St. Jude Children’s Research Hospital is located in Memphis, Tennessee. The hospital was founded in 1962 by the entertainer Danny Thomas, and it is named after Thomas’s patron saint.

11. Indian flatbread : ROTI
In an Indian restaurant, naan bread is very popular. Roti is the unleavened cousin to naan.

13. Math is part of it: Abbr. : PSAT
I think the acronym PSAT stands for Preliminary Scholastic Aptitude Test.

15. Benefiting from Vivarin : AWAKE
Vivarin is a brand name for the drug caffeine.

16. It’s shown on TV monitors at many airports : CNN NEWS
CNN (Cable News Network) was launched in 1980, the first television channel in the world to provide news 24 hours a day.

26. 51-Down division : CASTE
The bees in a hive are divided into three castes, three societal levels:

27. Alexandria is in it : DC AREA
The city of Alexandria, Virginia lies on the west bank of the Potomac River and is just six miles from Washington, D.C. Alexandria was actually ceded to the US Government to form part of the District of Columbia in 1791, but the city was returned to her home state in 1846.

30. Net sales : ETAIL
“Etail” is the term used these days for online shopping. It is often compared to regular shopping in the “real world” by juxtaposing it with a “brick and mortar” store.

31. Spur part : ROWEL
That pointed wheel on a spur, which digs into the side of the poor horse, that’s called a rowel.

“Lys” (also “lis”) is the French word for “lily”, as in fleur-de-lys, the heraldic symbol often associated with the French monarchy.

40. Pirate’s appurtenance : CUTLASS
An appurtenance is an accessory, a piece of equipment for a specific task.

41. Grandfathers, e.g. : EXEMPTS
“To grandfather” something is to exempt it, say from a new regulation.

43. Speakeasy scourge : RAIDER
A speakeasy is an establishment that sells alcoholic drinks illegally. They were very big in the US in the days of Prohibition. The obvious etymology, of a speakeasy owner asking his or her customers to “speak easy” so as not to draw attention to the authorities, is thought to have originated in 1888 in McKeesport, just outside Pittsburgh.

47. “The primary factor in a successful attack,” per Lord Mountbatten : SPEED
Louis Mountbatten was the uncle of Prince Philip, the husband of Queen Elizabeth II. Mountbatten held many influential posts in the British Government. He was the last Viceroy of India in the late forties and oversaw the transition of India to independence and the end of the British Raj. In the 1950s, he was First Sea Lord, the head of the Royal Navy. Mountbatten was assassinated by the Irish Republican Army in 1979, while holidaying in his summer home in the West of Ireland.

49. Capital near Faleolo International Airport : APIA
Apia is the capital city, in fact the only “city”, of the Pacific island nation of Samoa. The harbor of Apia is famous for a very foolish incident in 1889 involving seven ships from Germany, the US and Britain. A typhoon was approaching, so the safest thing to do was head for open water away from land, but no nation would move its ships for fear of losing face in front of the others. Six of the vessels were lost in the typhoon as a result, and 200 American and German sailors perished. The British cruiser HMS Calliope barely managed to escape from the harbor and rode out the storm safely.

55. Lofty place : ACME
The “acme” is the highest point, coming from the Greek word “akme” which has the same meaning.

58. “I think you overshared,” briefly : TMI
Too Much Information!

59. Locomobile competitor : REO
The Locomobile Company of America was founded in 1899 in Watertown, Massachusetts to manufacture automobiles. The company first produced small steam cars. During the Boer War (1899-1902), Locomobile produced the first car ever designed for use in a war, a generator and searchlight tractor made for the British Army. Production was switched to internal combustion-powered vehicles in 1903, and the company focused on luxury vehicles until it went out of business in 1929.