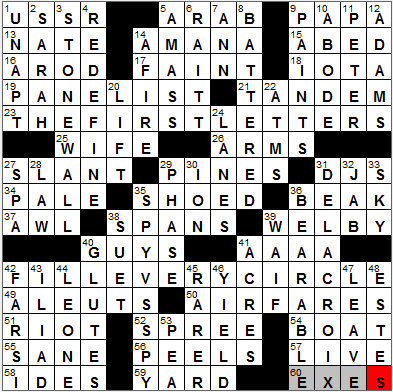 CROSSWORD SETTER: Patrick Berry
There’s a note with today’s puzzle!
“CROSS” WORD CONTEST — All the puzzles this week, from Monday to Saturday, have been created by one person, Patrick Berry. Have your solutions handy, because the Saturday puzzle conceals a meta-challenge involving the solution grids of all six. When you have the answer to the meta-challenge, mail it to: crossword@nytimes.com. Twenty-five correct solvers, chosen at random, whose entries are received by 6:00 p.m. E.T. Sunday, Oct. 23, will receive copies of “Will Shortz Picks His Favorite Puzzles: 101 of the Top Crosswords From The New York Times.” Only one entry per person, please. The answer and winners’ names will appear on Friday, Oct. 28, at Wordplay.
THEME: As this is a week’s puzzles collectively are being used for a contest, I’ve decided to wait a day to share how the whole meta-challenge unfolds. All I will say is, that Patrick Berry is a genius!
UPDATE: The contest is closed, so here is the answer to meta-challenge:

The “meta-challenge” requires us to follow the instructions in the theme answers:
23A. Find contest’s meta-answer by reading ___ of these clues : THE FIRST LETTERS
The first letters of this puzzle’s clues spell out, “The corners of this week’s grids, read in order, spell a famous leader and his crossing words.”
The cornerletters from this week’s puzzles are:
I S D A … Monday
J C T I … Tuesday
U A H S … Wednesday
S R E T … Thursday
L E E C … Friday
U A I S … Saturday
42A. Solvers must ___ in the grids to determine the grids’ proper order : FILL EVERY CIRCLE
Cleverly, if we check all the gird from this week we can see that there are very few “circles” in each puzzle, i.e. very few occurences of the letter “O”. Fill in each “circle” and we see that they form dots in patterns as seen on the sides of a six-sided dice. So, putting the grids in numerical order, and again listing the corner letters:
J C T I … 1-Tuesday
U A H S … 2-Wednesday
L E E C … 3-Friday
I S D A … 4-Monday
U A I S … 5-Saturday
S R E T … 6-Thursday
Reading up and down we get the answer to the meta-challenge:
“Julius Caesar, the die is cast”


Today’s Wiki-est, Amazonian Googlies
Across
1. Treaty signer with Ger. in 1939 : USSR
WWII started with Germany’s invasion of Poland in 1939. A few days later, the USSR did the same thing, moving across Poland so that the country was divided with the USSR and Germany entering into a Treaty of Friendship later that year. In 1941, Germany made a surprise attack on the Soviet Union, leading to the USSR entering into an alliance with the UK. By the time the US formally entered the war after the attack on Pearl Harbor, the deal was already done, and the US and USSR were allies.

5. Horse of a sort : ARAB
The Arab (or Arabian) breed of horse takes its name from its original home, the Arabian Peninsula. Like any animal that humans have over-bred though, the horse falls prey to genetic diseases, some of which are fatal, and some of which require the horse to be euthanized.

13. Campaign/election analyst ___ Silver : NATE
Nate Solver is a statistician who first gained notoriety by developing a forecasting system that predicted the future performance of baseball players. He then made a name for himself in the world of politics by predicting the outcome of the 2008 US presidential race. Silver successfully predicted the outcome of the election in 49 of the 50 states, missing out on Indiana, which Barack Obama won by less than 1% of the vote.

14. Oven brand : AMANA
The Amana Corporation takes its name from the location of its original headquarters, in Middle Amana, Iowa.

16. Nickname since 1999 : A-ROD
Poor old Alex Rodriguez earned more nicknames than just A-Rod. He has been called “the Cooler” by some players as there is a perception that teams go cold when he joins them, and hot when he leaves. He has also been called “A-Fraud” by teammates because of another perception, that he is over-demanding.

18. Really small amount : IOTA
Iota is the ninth letter in the Greek alphabet. We use “iota” to portray something very small, as it is the smallest of all Greek letters.

23. Find contest’s meta-answer by reading ___ of these clues : THE FIRST LETTERS

25. Tenth Commandment word : WIFE
According to the Book of Exodus, the wording for the tenth commandment is:

29. Seven ___ (Civil War battle site) : PINES
The Battle of Seven Pines is also known as the Battle of Fair Oaks, and took place during the Civil War in the middle of 1862.

31. Workers who play? : DJS
Supposedly, the world’s first radio disk jockey was one Ray Newby of Stockton, California in 1909 would you believe? When he was 16 years old and a student, he started to play his records on a primitive radio located in the Herrold College of Engineering and Wireless in San Jose. The records played back then were mostly recordings of Enrico Caruso.

39. Role for Young : WELBY
“Marcus Welby, M.D.” is a television series that originally aired from 1969 to 1976. The title role was of course played by Robert Young.

40. Insults playfully : GUYS
“To guy” is to hold up to ridicule and to mock. I think the term comes from Guy Fawkes, the man caught placing a gunpowder charge in the Houses of Parliament in 1605. His effigy is burned and ridiculed to this day, but for fun, on Guy Fawkes Day in England on November 5th every year.

42. Solvers must ___ in the grids to determine the grids’ proper order : FILL EVERY CIRCLE

49. Rat Island natives : ALEUTS
Rat Island in the western Aleutians in Alaska has no permanent human population. A Japanese ship was wrecked on the coast of the island in 1780, and as a result the ship’s population of rats ran for land. Since then, the island has been overrun with the offspring of those Japanese brown rats.

Down
2. “Princess” in its Hebrew translation : SARAH
The Hebrew name “Sarah” translates as “princess”, and also “lady”.

6. Activist/singer Bonnie : RAITT
Bonnie Raitt is a blues singer, originally from Burbank, California. She has won nine Grammies for her work, but she is perhaps as well known for her political activism as she is for her music. She was no fan of President George W. Bush, and she sure did show it.

7. Former Texas governor Richards : ANN
Ann Richards was the second woman to serve as Governor of Texas, and held the office from 1991 to 1995. Richards was a Democrat, and she was defeated in the 1994 election by George W. Bush.

11. Ustinov of “Topkapi” : PETER
“Topkapi” is a fun film released in 1964. It is based on the novel “The Light of Day” by Eric Ambler. Peter Ustinov played one of the leading roles in the movie, and yet he won the Best Supporting Actor Oscar for his performance.

Peter Ustinov was a fabulous actor from England. It has to be said though, he was multi-talented and was a great guest on the talk show circuit.

12. Second or sixth in a series : ADAMS
John Adams was the second President of the United States. I must admit that I learned much of what I know about President Adams in the excellent, excellent HBO series “John Adams”. Having said that, I also visited his home in Quincy, Massachusetts not so long ago. He was clearly a great man, with a great intellect …

John Quincy Adams, the son of John Adams, was the 6th President. Like his father, John Quincy worked for many years as a diplomat representing the young United States. After leaving office, Adams served in Congress as Representative from Massachusetts, the only president ever to enter the House after leaving the office as President.

27. Évian, for one : SPA
Évian-les-Bains (or simply Évian) is in the very east of France on the shores of Lake Geneva, directly across the lake from Lausanne, Switzerland. As you might imagine, Évian is the home of Évian mineral water, the most successful business in town. I can’t stand the taste of Évian water …

31. “Death of Sardanapalus” painter Eugène : DELACROIX
Eugène Delacroix was a French artist, considered by many to be the leader of the French Romantic School.

35. Strip since 1961 that’s printed in black and white : SPY VS SPY
“Spy vs Spy” is a comic strip that has run in “Mad” magazine continuously since 1961. It was drawn by Antonio Prohias, a refugee from Cuba, until his retirement. The early storyline was very fitting for the times, a statement about the futility of the arms race, detente and the Cold War.

38. Raw beef fat : SUET
Fat, when extracted from the carcass of an animal, is called “suet”. Untreated suet decomposes at room temperature quite easily so it has to be “rendered” or purified to make it stable. Rendered fat from pigs is what we call “lard”. Rendered beef or mutton fat is known as “tallow”.

39. Oliver Twist, e.g. : WAIF
“Oliver Twist” is of course a novel by Charles Dickens. It is a popular tale for adaptation to the big screen. There were two silent film versions, in 1909 and 1922, and the first talkie version was released in 1933, with many to follow. The latest “Oliver” for the big screen was a 2005 Roman Polanski production.

40. Seat cushions? : GLUTES
There are three gluteal muscles in the human body, the largest of which is the gluteus maximus. It’s the glueteus maximus which really dictates the shape and size of the human buttocks. In evolutionary terms, the human “glutes” are larger than those in related species because they play a big role maintaining our erect posture.

42. Iranian tongue : FARSI
“Farsi” is one of the local names for Persian, an Iranian language.

43. Narrative set in the Bronze Age : ILIAD
The Iliad is the epic poem by the Greek poet Homer, which tells the story of the siege of Ilium during the Trojan war.

44. Genre film director Sergio : LEONE
Sergio Leone was an Italian film director, very much associated with the genre known as “Spaghetti Westerns”. Perhaps most famous of his westerns was the so-called “Man with No Name” trilogy that starred Clint Eastwood. The three films are:

48. Democratic senator Kefauver : ESTES
Estes Kefauver was a Democratic politician from Tennessee. In 1956 he was the running mate of Adlai Stevenson. The pair of course lost to the Eisenhower-Nixon ticket.

53. Shepherd’s pie tidbit : PEA
Shepherd’s pie, also known as cottage pie, is one of my favorite dishes. It is a meat pie (although my wife makes a vegetarian version), with a crust made from mashed potato.