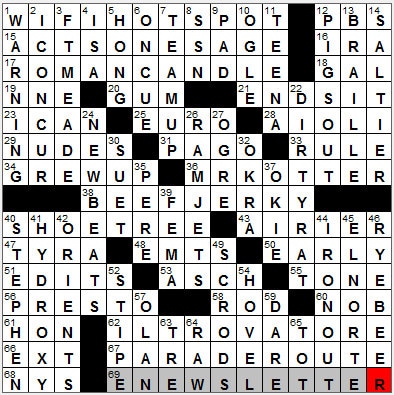 
Today’s Wiki-est, Amazonian Googlies
Across
1. Coffee shop, often : WI-FI HOTSPOT
A Wi-Fi hotspot is a “spot” where one can connect wirelessly with a Wi-Fi connection to a router at the center of the hotspot. From there, one can access the Internet via a modem connected to that router.

16. Pianist Stein : IRA
Ira Stein is an American pianist who does a lot of work combining classical and jazz music.

17. Producer of shooting stars : ROMAN CANDLE
A Roman candle is a type of firework. It looks somewhat like a candle with a wick at the top. When lit is shoots out stars or exploding shells. There is a tendency of the Roman candle to cause a lot of accidents, so it is banned in some countries.

18. Ado Annie, e.g. : GAL
Ado Annie is a character in the Rogers and Hammerstein smash hit musical “Oklahoma!” Ado Annie was played by Gloria Grahame in the 1955 film. If you don’t remember the character, you might remember one of her songs … “I Can’t Say No”.

19. Pentagon-to-Lincoln Memorial dir. : NNE
The Lincoln Memorial is my favorite place to visit in the whole of Washington D.C. The memorial was designed by Henry Bacon, and the sculptor of the magnificent statue of President Lincoln was Daniel Chester French. I spent a wonderful afternoon not too long ago touring the workshop and home of French, in Stockbridge, Massachusetts. The workshop is stunning, with miniature studies for his magnus opus, the Lincoln Statue, as well as many other beautiful works.

20. Aid in relieving xerostomia : GUM
Xerostomia is an abnormal dryness of the mouth.

28. Pungent dressing : AIOLI
To the purist (especially in Provence in the South of France, the “home” of aioli), aioli is prepared just by grinding garlic with olive oil. However, other ingredients are often added to the mix, particularly egg yolks.

31. Polynesian port, when doubled : PAGO
Pago Pago is the capital of American Samoa in the South Pacific. The island was used by the US Navy during WWII and it managed to escape most of the conflict, with the only incident being the shelling of the city’s harbor by a Japanese submarine. A more devastating event was the tsunami that hit Pago Pago and surrounding areas in 2009, causing widespread damage and numerous deaths.

36. Part of the Buchanan High faculty : MR KOTTER
“Welcome Back, Kotter” was a sitcom from the the late seventies. The title character was a teacher at Buchanan High, one Gabe Kotter who himself had attended the school as a student. Kotter was played by Gabe Kaplan. One of the prominent students in his class was a young John Travolta, playing a role that launched his film career.

47. Banks with many spreads : TYRA
As a model, Tyra Banks appeared in many photo spreads.

Tyra Banks is a tremendously successful model and businesswoman. She hosts, and indeed created, the hit show “America’s Next Top Model “, and has her own talk show. Banks was the first African American woman to make the cover of the “Sports Illustrated” swimsuit issue.

53. “Mottke the Thief” novelist, 1935 : ASCH
Sholem Asch was a Polish-born American novelist and dramatist who published his work in Yiddish. One of his plays was “God of Vengeance”, a highly-regarded work performed all over Europe and translated into many languages. It opened on Broadway in 1923, but the adult themes (it was set in a brothel, and featured a lesbian relationship) led to the entire cast being arrested and convicted on obscenity charges.

56. Scored very quickly? : PRESTO
On a musical score, presto is used to indicate a fast tempo. “Presto” is the Italian word for “quick”.

62. Its title character is Manrico : IL TROVATORE
Giuseppe Verdi’s opera “Il Trovatore” is known in English as “The Troubadour”. It is one of the few operas with more than one version written by the same composer. Verdi wrote a French translation, with some revisions to the score, which goes by the name “Le trouvère”.

68. Clinton was its first gov. : NYS
Not only was George Clinton the first Governor of New York, he was the state’s longest serving governor, holding office for eighteen years from 1777 to 1795. He was also the fourth Vice President of the United States, serving under both President Thomas Jefferson and President James Madison.

Down
2. “Ditto” : I CONCUR
“Ditto” was originally used in Italian (from Tuscan dialect) to avoid repetition of the names of months in a series of dates. It’s just another wonderful import from that lovely land …

3. Base in Anne Arundel County: Abbr. : FT MEADE
Fort George G. Meade is located near Odenton, Maryland and is most famous these days as the location of the headquarters of the National Security Agency.

5. “Wayne’s World 2” actor James : HONG
My guess is that we’ve all seen actor James Hong on our screens at some point, although he never really got a big leading role. For example, he played the ghost sorceror in “Big Trouble in Little China”.

8. Subj. of the Privacy Act of 1974 : SSN
The main purpose of a Social Security Number (SSN) is to track individuals for the purposes of taxation although, given its ubiquitous use, it is looking more and more like an “identity number” to me. The social security number system was introduced in 1936. Prior to 1986, an SSN was required only for persons with substantial income, so many children under 14 had no number assigned. There was concern that a lot of people were claiming children as dependents on their tax returns who did not exist, so from 1986 onwards it was a requirement to get a SSN for any dependents over the ago of 5. Sure enough, in the following year’s returns, seven million dependents “disappeared”.

“The X-Files” is a very successful science fiction show that aired on the Fox network from 1993 to 2002. The stars of the show are David Duchovney (playing Fox Mulder) and the very talented Gillian Anderson (playing Dana Scully). By the time the series ended, it was the longest running sci-fi show in US broadcast history.

13. It has many tangible points : BRAILLE
The Braille system of reading and writing was devised in 1825 by Louis Braille, who was himself afflicted with blindness. Braille characters are composed of six positions or dots, each arranged in two columns of three dots each. Every dot can be raised or not raised, given a total of 64 possible characters.

26. Aircraft propellers without moving parts : RAMJETS
A “ramjet” is a type of jet engine that uses the speed of the incoming air (due to the aircraft’s forward motion) to compress that air prior to combustion. In a regular jet engine the air is compressed by a fan that sucks air into the combustion chamber. In a ramjet, air enters the chamber usually at supersonic speed (the speed of the jet) and is slowed prior to combustion. In a scramjet, a variant of a ramjet, the air is maintained at supersonic speeds, allowing the scramjet to operate at very high velocity.

30. Cake makeup for a feeder : SUET
Suet is a very popular ingredient in food provided for bird feeders.

Fat, when extracted from the carcass of an animal, is called “suet”. Untreated suet decomposes at room temperature quite easily so it has to be “rendered” or purified to make it stable. Rendered fat from pigs is what we call “lard”. Rendered beef or mutton fat is known as “tallow”.

Orléans is a city in France, located less than 100 miles southwest of Paris. The city gives its name to the American city of New Orleans.

39. Damage-assessing grp. : FEMA
Federal emergency management has been structured for over 200 years, but what we know today as the Federal Emergency Management Agency (FEMA) was created in 1979 in an Executive Order issued by President Jimmy Carter.

40. King with revolting subjects : STEPHEN
Stephen King is a remarkably successful author, having sold over 350 million copies of his books, many of which have been made into hit movies. I’ve tried reading two or three, but I really don’t do horror …

41. Like citric acid and lactic acid : HYDROXY-
The prefix “hydroxy-” is used to denote a compound with a hydroxyl group, a pairing of an oxygen atome and a hydrogen atom (-OH).

45. Land above the Río Bravo : EL NORTE
“El Norte” is the term many people in Central America use for the United States and Canada, “the North”.

46. Cousin of kvass : RYE BEER
Kvass is an alcoholic beverage made from rye bread, typically with a low-alcohol content (relative to beer, say). It is popular in Eastern and Central European countries.

49. Splits for cooking, as fish : SCRODS
Scrod is the name given to fish that has been “scrawed” i.e. split open, dried and then broiled.

52. Mushroom supporter : STIPE
A mushroom isn’t a complete living organism per se, but rather is one part of a fungus, the fruiting body that is responsible for distributing reproductive spores. The mushroom generally has three main components: the stipe (or stem), the pileus (or cap) and the lamellae (or gills) under the cap which distribute the spores.

57. Wang Lung’s wife, in literature : O-LAN
Pearl S. Buck’s novel “The Good Earth” won a Pulitzer in 1932, and helped Buck win the Nobel Prize for literature a few years later. The story tells of life in a Chinese village, and follows the fortunes of Wang Lung and his wife O-Lan. Although “The Good Earth” has been around for decades, it hit the bestseller list again in 2004 when it was a pick for Oprah’s Book Club.