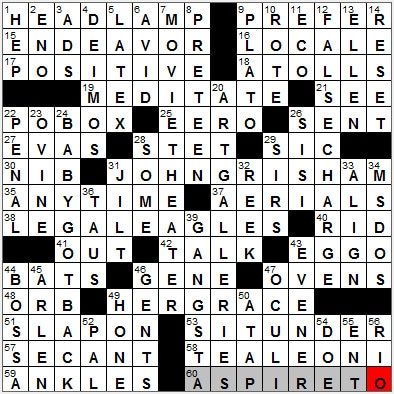 
Today’s Wiki-est, Amazonian Googlies
Across
18. Much of Micronesia : ATOLLS
The part of the Pacific Ocean known as Oceania is roughly equivalent to the tropical islands of the South Pacific. Oceania can be divided into the regions of Polynesia, Melanesia and Micronesia.

19. Use a Zen garden : MEDITATE
Japanese Zen gardens are inspired by the meditation gardens of Zen Buddhist temples. Zen gardens have no water in them, but often there is gravel and sand that is raked in patterns designed to create the impression of water in waves and ripples.

22. Disallowed FedEx destination : PO BOX
FedEx won’t deliver to P.O. boxes, and often requires a signature when dropping off a package. However, in 2004 the company introduced a service called FedEx SmartPost that uses the US Postal Service to complete delivery to residential addresses and P.O. boxes. SmartPost is cheaper and slower than regular FedEx service.

25. ___ Aarnio, innovative furniture designer : EERO
Eero Aarnio is a Finnish interior designer, perhaps most famous for creating those round, plastic chairs that hung from the ceiling and were very fashionable in the sixties. It was sort of like sitting inside a big ball.

26. Put on cloud nine : SENT
I don’t think that anyone is really certain of the etymology of the term “cloud nine”, but I do like the following explanation. The 1896 “International Cloud-Atlas” was a long-standing reference used to define cloud shapes. The biggest, puffiest of all cloud shapes (and most comfortable looking to lie on) is cumulonimbus. And you guessed it, of the ten cloud shapes defined in the atlas, cumulonimbus was cloud nine …

27. Spacewalks and moonwalks, briefly : EVAS
Extra-vehicular activity (EVA) is the name given to any work done by an astronaut outside of his or her spacecraft. The term would encompass walking on the moon, as well as making a space walk i.e. floating around in space tethered to spacecraft.

28. Put back in order? : STET
“Stet” is the Latin word meaning “let it stand”. In editorial work, the typesetter is instructed to disregard any change previously marked by writing the word “stet” beside the change and then underscoring the change with a line of dots (or dashes).

29. Direction for a boxer : SIC
Sic ’em is an attack order given to a dog, instructing the animal to growl, bark or even bite. The term dates back to the 1830s, with “sic” being a variation of “seek”.

30. Tip for a writer : NIB
“Nib” is a Scottish variant of the Old English word “neb”, with both meaning the beak of a bird. This usage of “nib” as a beak dates back to the 14th century, with “nib” meaning the tip of a pen or quill coming a little later, in the early 1600s.

31. Creator of many 38-Across : JOHN GRISHAM
“The Firm” is the book that brought John Grisham his first success, although it was the second novel that he wrote. The first was “A Time to Kill”, which garnered a lot more attention after “The Firm” took off. Personally, my favorite of his novels is “Runaway Jury”.

8. Many 31-Across characters : LEGAL EAGLES
“Legal eagle” is slang, for a skilled lawyer.

43. Kellogg’s brand : EGGO
Eggo is the brand name of a line of frozen waffles made by Kellogg’s. When they were introduced in the 1930s, the name “Eggo” was chosen to promote the “egginess” of the batter. “Eggo” replaced the original name chosen, “Froffles”, created by melding “frozen” and “waffles”.

44. Wrigley sticks? : BATS
The famous ballpark that is home to the Chicago Cubs was built in 1914. Back then it was known as Weegham Park, before becoming Cubs Park when the Cubs arrived in 1920. It was given the name Wrigley Field in 1926, after the owner William Wrigley, Jr. of chewing gum fame.

46. Characteristic governor : GENE
A gene is a section of a chromosome that is responsible for a particular characteristic in an organism. For example, one gene may determine eye color and another balding pattern. We have two copies of each gene, one from each of our parents, with each copy known as an allele.

49. Title for Wallis Simpson : HER GRACE
Wallis Simpson was an American socialite. She was married three times. Her first husband was Earl Winfield Spencer, Jr., a navy pilot who was the first commanding officer of the Naval Air Station at San Diego. The couple divorced in 1927 and the following year she married Ernest Aldrich Simpson, a British shipping executive. Around 1934, Mrs. Simpson started an affair with Edward, Prince of Wales, the heir to the British throne. In 1936, Edward’s father died making him King Edward VIII. Wallis Simpson filed for divorce, but the UK constitution would not allow her marriage to the King (the regent cannot marry someone who is divorced). A few months later, the King abdicated the throne in order to be with the woman he loved.

53. Attend the lectures of : SIT UNDER
“To sit under” is to attend classes or lectures apparently …

57. Curve-cutting line : SECANT
A secant line is a straight line that intersects a curve at two points. A chord is a portion of a secant line, that portion that falls within the curve.

59. Where traditional bloomers gather : ANKLES
Bloomers are trousers that gathered at the ankles, which a woman used to wear under a skirt.

Down
1. Cool, once : HEP
The slang term “hep” meaning “cool” has the same meaning as the later, derivative term “hip”. The origins of “hep” seem unclear, but it was adopted by jazz musicians of the early 1900s.

Brian Eno started out his musical career with Roxy Music. However, his most oft-played composition (by far!) is Microsoft’s “start-up jingle”, the 6-second sound you hear when the Windows operating system is booting up.

4. Martian moon : DEIMOS
Mars has two moons, the larger of which is Phobos and the smaller is Deimos. “Phobos” is the Greek word for “fear”, and “Deimos” is Greek for “dread”.

8. What a bar mitzvah recently was : PRETEEN
A Jewish girl becomes a Bat Mitzvah at 12 years of age, the age at which she becomes responsible for her actions. Boys become Bar Mitzvahs at 13. The terms translate into daughter and son of the commandments.

9. “Apology” author : PLATO
Plato was a Greek philosopher and mathematician. He was a student of the equally famous and respected Socrates, and Plato in turn was the teacher and mentor of the celebrated Aristotle.

13. Astronaut Ochoa : ELLEN
Ellen Ochoa was the first Hispanic woman in space, serving on a nine-day mission on the space shuttle Discovery in 1993. She spent over 1,000 hours in space, over the course of four missions. Ochoa is now the Deputy Director of the Johnson Space Center in Houston, Texas.

23. Like ones that are fleeced : OVINE
The Latin word for “sheep” is “ovis”, giving us the adjective “ovine”, like a sheep.

24. Bum rap? : BABY GOT BACK
I am reliably informed that “baby got back” is urban slang for “she has a nice rear end” …

29. Sean Connery and Roger Moore, e.g. : SIRS
Sean Connery wasn’t the first choice for the role of James Bond. Six potential actors were selected for a screen test, after which a 28-year-old model was chosen called Peter Anthony. It turned out later that Anthony wasn’t up to the job, and so second-choice Connery was given a call.

Roger Moore is best known in the US for taking on the role of 007 in seven James Bond movies from 1973 to 1985. In my part of the world we remember him playing a very debonair hero called Simon Templar in a TV series called “The Saint” from 1962 to 1969. Moore’s Templar character could very easily have morphed into a great James Bond, but by the time he was offered the part I personally think that he was just a tad too long in the tooth to pull off a credible 007.

31. End it with suddenly : JILT
To “jilt” someone with whom you have a relationship is to drop them suddenly or callously. “Jilt” is an obsolete noun that used to mean “harlot” or “loose woman”.

32. Be mephitic : REEK
A gas that is mephitic is poisonous or foul-smelling.

34. Kind of PC command : MS-DOS
MS-DOS was the main operating system used by IBM-compatible PCs in the eighties and for much of the nineties.

36. Certain crosses : TAUS
Tau is the 19th letter of the Greek alphabet, the letter which gave rise to our Roman “T”. Both the letters tau (T) and chi (X) were symbolically associated with the cross.

39. Ice-T or Ice Cube persona : GANGSTA
In urban slang, the word “gangsta” is used to describe someone that is uneducated and antisocial.

Rapper Ice-T must be sick of having his name come up as an answer in crossword puzzles. Maybe he should have stuck to his real name, Tracy Marrow. Then again, maybe not …

Rapper Ice Cube has a real name of O’Shea Jackson. Since the year 2000, Ice Cube has gradually moved away from rap music and focuses more on acting.

44. Nova preceder : BOSSA
Bossa Nova is a style of music from Brazil that evolved from samba. The most famous piece of bossa nova is the song “The Girl from Ipanema”.

45. Composer nominated for an Oscar for “Blues in the Night” : ARLEN
Harold Arlen is a composer of popular music, forever to be associated with his composition “Over the Rainbow” from “The Wizard of Oz”, regarded by many as the greatest song of the 20th century.

50. “___ at the pane”: Robert Browning : A TAP
Robert Browning met Elizabeth Barrett in 1845. Elizabeth was a sickly woman, confined to her parents’ house in Wimpole Street in London, largely due to the conservative and protective nature of her father. The two eventually eloped in 1846, and lived in self-inflicted exile in Italy. Away from the country of his birth, Browning was moved to write his now famous “Home Thoughts, From Abroad”, the first line of which is “Oh, to be in England …”

55. Fictional creature whose name is Old English for “giant” : ENT
Ents are those tree-like creatures that live in J. R. R. Tolkien’s Middle-earth, in his series of books “The Lord of the Rings”. “Ent” is an Old English word for “giant”.

56. Museu do Índio site : RIO
The Museu do Índio (Portuguese for “the Museum of the Indian”) is located in Rio de Janeiro, Brazil. The museum focuses on collecting and displaying artifacts from the indigenous cultures of the country.