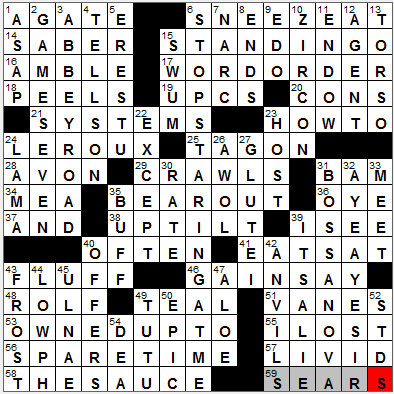 
Today’s Wiki-est, Amazonian Googlies
Across
1. It has rock bands : AGATE
Agate is a micro-crystalline form of quartz (so is related to sand/silica). Some agate samples have deposited layers giving a striped appearance, and these are called “banded agate”.

15. Informal show of approval? : STANDING O
Give ‘em a big hand, maybe even a “standing O”, a standing ovation.

24. Gaston who wrote “The Phantom of the Opera” : LEROUX
Gaston Leroux was a French author and journalist best known for writing “The Phantom of the Opera”, first published in 1910. As a journalist, Leroux was involved in an investigation into the Paris Opera. The basement of the opera house contained a cell that was used to hold prisoners in 1871, something that Leroux featured in his most famous novel.

28. ___ Lady (decades-old commercial creation) : AVON
In 1886, a young man called David McConnell was selling books door-to-door. To enhance his sales numbers he was giving out free perfume to the ladies of the houses he visited. Seeing as his perfume was more popular than his books he founded the California Perfume Company in New York City and started manufacturing and selling across the country. The company name was changed to Avon in 1939, and the famous “Avon Calling” marketing campaign started in 1954.

46. Deny : GAINSAY
“To gainsay” is to deny or contradict, basically to “say again”.

48. Give a good rubdown : ROLF
Rolfing is a trademarked massage technique, developed by Ida Pauline Rolf in the fifties. Rolf was a biochemist by training, from New York. Rolfing is one of those practices that is controversial, with many folks doubting that there is any benefit.

49. Blue shade : TEAL
The beautiful color of teal takes it name from the duck called a “teal”, which has dark, greenish-blue (teal) markings on its head and wings.

55. The Temptations’ “Since ___ My Baby” : I LOST
The Temptations used to be known as the Elgins, and were formed in 1960 in Detroit. The group is still performing, although only the second tenor, Otis Williams, was part of the original quintet. The Temptations were very much associated with their “sister group”, the Supremes.

Down
2. Series ender, sometimes : GAME SEVEN
There might be a game seven in MLB’s World Series, the NBA Playoffs, or NHL’s Stanley Cup playoffs.

3. 1969 #1 album for 11 weeks : ABBEY ROAD
“Abbey Road” was the last album that the Beatles released before they finally broke up. “Abbey Road” was named after the street in London in which the recording studio was located. The Fab Four is featured in the album’s cover, walking across the pedestrian crossing that’s in the road right in front of the studio.

5. 1974 lyric repeated after “Como una promesa” : ERES TU
We have a big event across Europe every year called the Eurovision Song Contest. Each nation enters one song in competition with each other, and then voters across the whole continent decide on the winner. That’s how ABBA got their big break when they won in 1974 with “Waterloo”. In 1972, Spain’s entry was “Eres tu” (the Spanish for “You Are”) sung by the band Mocedades. It came second in the competition, but should have won in my humble opinion.

9. Old Tokyo : EDO
Edo is the former name of the Japanese city of Tokyo. Edo was the seat of the Tokugawa shogunate, a feudal regime that ruled from 1603 until 1868. The shogun lived in the magnificent Edo castle. Some parts of the original castle remain, and today’s Tokyo Imperial Palace, the residence of the Emperor of Japan, was built on its grounds.

10. Diamond substitute : ZIRCON
Zircon is the name of the mineral with the chemical name of zirconium silicate. Zircon comes in many colors, and colorless specimens that are of gem quality are often used as a substitute for diamonds.

13. Many a sculpture : TORSO
“Torso” is an Italian word meaning the “trunk of a statue”, which we imported into English.

26. One who’s gone but not forgotten : AWOL
The Military Police go after personnel who are Absent With-Out Leave (AWOL).

27. Muscles strengthened by squats : GLUTEI
There are three gluteal muscles in the human body, the largest of which is the gluteus maximus. It’s the glueteus maximus which really dictates the shape and size of the human buttocks. In evolutionary terms, the human “glutes” are larger than those in related species because they play a big role maintaining our erect posture.

31. Music style derived from samba and jazz : BOSSA NOVA
Bossa Nova is a style of music from Brazil that evolved from samba. The most famous piece of bossa nova is the song “The Girl from Ipanema”.

35. Aficionado : BUFF
An “aficionado” is an enthusiast, a word that came to us from Spanish. It was originally used in English to describe a devotee of bullfighting.

43. He famously asked “Why didn’t you burn the tapes?” : FROST
The British journalist David Frost is perhaps best known in the US for hosting the television show “Through the Keyhole”, and for his celebrity interviews, most notably with former President Richard Nixon. That interview was adapted as a play and then a movie called “Frost/Nixon”. The movie was directed by Ron Howard. It’s a little slow, but a must see for political history buffs like me.

44. Vinegar quality : LOW PH
As we all recall from chemistry class, a pH of 7 is considered neutral. Anything less than 7 is an acid, and anything above 7 is a base.

47. Botanical balm : ALOE
Aloe vera has a number of alternate names that are descriptive of its efficacy as a medicine. These include the First Aid plant, Wand of Heaven, Silent Healer and Miracle Plant.

49. Object frequently painted by Degas : TUTU
The word “tutu”, used for a ballet dancer’s skirt, is actually a somewhat “naughty” term. It came into English from French in the early 20th century. The French “tutu” is an alteration of the word “cucu”, a childish word for “cul” meaning the “bottom, backside”.

Edgar Degas was a French artist, famous for his paintings and sculptures. Some of his most beautiful works feature female ballet dancers.

54. Employer of many a 7-Down : DEA
(7. One looking for a deal? : NARC)
The Drug Enforcement Administration (DEA) was set up in 1973 while President Nixon was in office.