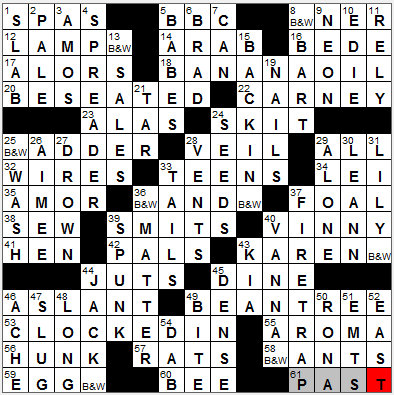 CROSSWORD SETTER: Patrick Berry
There’s a note with today’s puzzle!
“CROSS” WORD CONTEST — All the puzzles this week, from Monday to Saturday, have been created by one person, Patrick Berry. Have your solutions handy, because the Saturday puzzle conceals a meta-challenge involving the solution grids of all six. When you have the answer to the meta-challenge, mail it to: crossword@nytimes.com. Twenty-five correct solvers, chosen at random, whose entries are received by 6:00 p.m. E.T. Sunday, Oct. 23, will receive copies of “Will Shortz Picks His Favorite Puzzles: 101 of the Top Crosswords From The New York Times.” Only one entry per person, please. The answer and winners’ names will appear on Friday, Oct. 28, at Wordplay.
THEME: Black & White … this is a rebus puzzle, with some squares home to “BLACK & WHITE” (designated by B&W in the grid). In some squares the BLACK forms part of the “across” answer, WHITE part of the “down” answer. In other squares it’s the other way round:


Today’s Wiki-est, Amazonian Googlies
Across
1. Steamy places : SPAS
The word “spa” migrated into English from Belgium, as Spa is the name of a health resort there. The name “Spa” comes from the Walloon word “espa” meaning “spring, fountain”.

5. “EastEnders” network : BBC
“EastEnders” is a very, very successful soap opera produced and aired by the BBC since 1985.

Historically, the East End of London is the wrong side of the tracks, and is still home to some of the worst poverty in the UK. My parents moved from Ireland to the East End of London in the fifties, and had all their children there before moving back to Ireland. I’m an Irishman who is proud of his roots that extend across the Irish Sea into EastEnders territory.

12. Some soot : LAMPBLACK
Carbon black (also known as lampblack) is the product of the incomplete combustion of heavy petroleum products. It’s very like soot, although the physical characteristics are a little different. Carbon black is commonly used as a pigment.

14. Fellah or fedayee : ARAB
A “fellah” is a peasant or agricultural worker in the Arabic-speaking world.

A “fedayee” was an Armenian volunteer soldier who fought in the Persian, Russian and Ottoman Empires.

16. The Venerable ___ (old English historian) : BEDE
The Venerable Bede was a monk in the north of England in the first century AD. His is mainly known as an author and scholar, publisher of “The Ecclesiastical History of the English People”.

18. Insincere flattery, in slang : BANANA OIL
“Banana oil” is a slang term for nonsensical flattery, an expression we’ve been using since the early 1900s.

Art Carney was best known as the actor who played Ed Norton on the fifties television show “The Honeymooners”.

24. Burlesque bit : SKIT
“Burlesque” came into English from French, although the word is rooted in the Italian “burla”, the word for a joke, or mockery. A burlesque is work of literature, drama or music that is intended to amuse and cause laughter. Burlesques in the US took on a variety show format and were popular in the US from the 1860s. Over time, the variety acts started to include female striptease, and the term “burlesque” has come to be associated mainly with such entertainment.

25. 1980s Rowan Atkinson sitcom series set in various historical periods : BLACKADDER
“Blackadder” is a very successful set of four television comedy series that stars Rowan Atkinson. Each of the series is set in a different era:

32. Items wrapped in friction tape : WIRES
Friction tape is made from cloth impregnated with a rubbery adhesive to make it water-resistant. It was used in the past by electricians to insulate wires, but has now largely been replaced by PVC electrical tape.

34. Gift upon arrival, maybe : LEI
“Lei” is the Hawaiian word for “garland, wreath”, although in more general terms a “lei” is any series of objects strung together as an adornment intended to be worn.

35. Winged god : AMOR
“Amor” is the Latin name for the Roman god Cupid.

36. Like zebra crossings : BLACK AND WHITE
A zebra crossing is a pedestrian crossing marked by alternating dark and white stripes on the ground. I am willing to bet that the world’s most well-known zebra crossing is the one in front of the Abbey Road Studios in London, as it features so prominently on the cover of the famous “Abbey Road” album recorded by The Beatles.

37. Livery delivery : FOAL
“Livery” is the boarding and care of horses.

39. Jimmy of “The West Wing” : SMITS
Jimmy Smits’ most noted acting roles were probably as Victor Sifuentes on “L.A. Law” and as President Matt Santos on “The West Wing”. Smits is very fond of playing jai alai in a local league in his hometown of Los Angeles.

40. Title role for Joe Pesci : VINNY
“My Cousin Vinny” is a really fun film from 1992 starring Joe Pesci and Marisa Tomei. Would you believe that in 2008, the American Bar Association rated “My Cousin Vinny” as the #3 Greatest Legal Movie of all time, after “To Kill a Mockingbird” and “12 Angry Man”.

Joe Pesci got his big break in movies with a supporting role in “Raging Bull”, earning him an Oscar nomination early in his career. There followed a string of gangster roles played alongside De Niro, namely “Once Upon a Time in America”, “Goodfellas” and “Casino”. But I like his comedic acting best of all. He was marvelous in the “Home Alone” films, the “Lethal Weapon” series, and my personal favorite, “My Cousin Vinny”. Pesci gets a mention in the stage musical “Jersey Boys”, which isn’t too surprising as he is one of the show’s producers.

43. Best Supporting Actress nominee for “Five Easy Pieces” : KAREN BLACK
The actress Karen Black played quite a few memorable roles, including the waitress girlfriend of Jack Nicholson in “Five Easy Pieces” for which performance she received an Oscar nomination. If you have ever seen “Airport 1975”, she is the one playing the stewardess who ended up flying the plane after a mid-air collision.

49. Pod-bearing plant : BEAN TREE
Bean trees are trees that bear their seeds in pods. My favorite bean tree is the Carob tree, as the dried and roasted seeds make a great substitute for chocolate.

58. Nest-building pests : BLACK ANTS
There are quite a few species of ant that are black in color and hence are called black ants.

60. Bud drinker? : BEE
A bee drinks nectar, from the buds of plants.

Down
1. Sarcophagus lid : SLAB
A sarcophagus is a stone or wooden box in which a body is interred. “Sarcophagus” is Greek for “flesh eating stones”. The name was applied as a sarcophagus was often made from a kind of limestone that was believed to cause the flesh of corpses to decompose.

2. Like Death’s horse : PALE
The Four Horsemen of the Apocalypse are introduced in the Book of Revelation in the Christian Bible. Each of the four represents woe for man, in the form of pestilence, war, famine and death. The four horsemen ride on a white, red, black and pale horse respectively.

3. One of the Minor Prophets : AMOS
Amos is one of the twelve minor prophets in the Hebrew Bible.

6. Fastener in a punched hole : BRAD
“Brad” is a name given to the brass fastener that is used to hold sheets of paper together. The brad is used by inserting it through holes punched in the paper, and then spreading out the two legs of the fastener.

7. Pink-slip : CAN
The term “pink slip” can be used as a verb meaning “to terminate an employee”. No one really seems to know for sure where the term originated, but there are lots of stories.

8. Famously polite Old West stagecoach robber : BLACK BART
Black Bart was a “gentleman” bandit of the Old West. He committed dozens of robberies, but is remembered for leaving poems at two of the robbery sites!

10. Sedgwick in Warhol films : EDIE
Edie Sedgwick became famous when she starred in several short films made by Andy Warhol in the sixties.

13. January department store events : WHITE SALES
The first white sale took place in January of 1878 in a Philadelphia department store. It was called a white sale because it was only bed linens (which were all white) that were discounted. Over time, white sales have evolved to include almost any household items.

15. Iconic AC/DC album with the song “You Shook Me All Night Long” : BACK IN BLACK
The Heavy Metal band known as AC/DC was formed by two brothers in Australia. The group is usually called “Acca Dacca” down under.

26. Mann of rock : AIMEE
Aimee Mann is an American rock singer and guitarist.

30. Country singer Rimes : LEANN
LeAnn Rimes has been a country music star since she was 13 years old. In 2008 she disclosed publicly that she suffered from the autoimmune disease psoriasis. She has been active since then in raising money to fight the disease, and helping fund cancer research as well. So, not only did Rimes win three Grammy Awards in 1997, she also won a 2009 Humanitarian Award from the Academy of Country Music.

36. Some nerve tissue : WHITE MATTER
Nervous tissue is made up of white matter and grey matter. White matter is white because its mainly composed of fatty tissue. Grey matter appears grey as it contains a lot of blood capillaries.

39. Gumption : SPUNK
We’ve been using the word “spunk” to mean “pluck, courage” since the late 1700s. Prior to that it was a Scottish word meaning “spark”, which we absorbed into English.

40. Woman of letters? : VANNA WHITE
Vanna White is the lady who turns the letters on the “Wheel of Fortune” game show. She is big into knitting and crochet, and has her own line of yarns called “Vanna’s Choice”.

43. Sorento manufacturer : KIA
Kia Motors is the second largest manufacturer of cars in South Korea, behind Hyundai (and Hyundai is a part owner in Kia now). In recent years, Kia has focused on sales into Europe, and has been remarkably successful.

44. Star of 2010’s “Gulliver’s Travels” : JACK BLACK
The actor Jack Black was born in Santa Monica, California and is the son of two satellite engineers who worked on the Hubble Space Telescope program.

50. Novelist Jaffe : RONA
Rona Jaffe was an American novelist perhaps most famous for two of her books, “The Best of Everything” and “Mazes and Monsters”. “The Best of Everything” was published in 1958 and has been compared with the HBO television series “Sex and the City” as it depicts women in the working world. “Mazes and Monsters” was published in 1981 and explores a role-playing game similar to Dungeons & Dragons and the impact it has on players.

52. Defender in a bridge column : EAST
That would be bridge, the card game.